Tricky comments. How right is the professor Preobrazhensky, or Do not read Gazeta.ru?

July 15 2015
156
A hundred times heard this famous phrase about the newspaper from the mouth of the heroes of the "Heart of a Dog". And read many times. But this truth did not hit the brain. Did not become a dogma. No, no, but they will press the keys of this word - a newspaper.

Exercises at one of the landfills in Russia

And plunge into the world of complete absurdity. In the world with fictional heroes and villains. In a world where white for some reason turns out to be black. And vice versa. I understand the concerns of writers and philologists. Why read fiction, if it is enough to open the site of a newspaper with a claim to relevance? Then you and the fighter, and detective, and family drama. And for a snack and skanvordik for the intelligence of a kindergarten graduate.

I managed to type only the word newspaper this time. Next, the monitor is covered with a variety of titles. But if it was revealed at the word of the newspaper, then this is fate.

On the first page of the material - the bomb. Caliber "Bombs Dad".

"I did not want to participate in the fighting in Ukraine". Here it is. Testimony of a contract soldier! Here it is, the luck of a journalist. Blue Bird ...

"Several dozen contract servicemen from military unit №22179 of the 33th separate motorized rifle brigade (Maikop reconnaissance brigade) fled from the proving ground in the Rostov region because they were afraid of being sent to Ukraine. Criminal proceedings are being instituted against them, they face up to ten years in prison for leaving without permission parts and desertion. "

This phrase crowns the opus of a group of journalists. Noticed, not one or two soldiers deserted there. A few dozens. The servicemen are massively fleeing from the war in Ukraine.

23-year-old private Anatoly Kudrin from the Maikop reconnaissance brigade has already been convicted of unauthorized leaving the duty station - he received six months in a penal colony settlement. Two more servicemen are under arrest, the investigation of other contract servicemen who left the training ground without permission is ongoing. According to lawyers, the soldiers left the Kadamovsky range in the Rostov region, as they were afraid to be sent to the war in the Donbass. 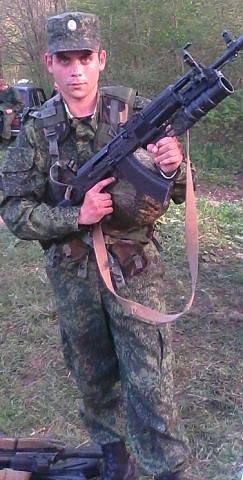 And this is the result of a journalistic investigation of the "Gazeta ..." Soldiers were afraid of being sent to war? Interestingly, in any classes, were these "animated warriors" afraid or only at the test site? Of course, it is an honor to serve in the Maykop brigade. Intelligence service. Yes, and the strength of this brigade in Ukraine really know. It is not for nothing that several times they “destroyed” valiantly, then at the airport of Donetsk, then in other parts of the LDNR.

It seems to me that the Maykop brigade, together with the Murmansk marine, with the support of the Buryat armored cavalry division and tanks Omsk riot police will be able to end the war in Ukraine in a day.

I am confident that there are many competent and trained soldiers and officers in the ranks of motorized riflers. But the main word here is "scouts". This military work is one of the most difficult. Difficult and dangerous. That's why scouts are taught hard. Sometimes cruel. And not everyone has the strength and courage to do this thing. There are also "weaklings". No, they are quite suitable for other parts, but in intelligence - alas.

But journalists diligently, "in a parrot" repeat - the soldier was afraid to go to war. The reader should not think, but remember the mantra.

Another example of the same investigation. "With the mother of 20-year-old grenade thrower Ivan Shevkunov, we meet in a cafe in the center of Maikop. A short woman is very excited." Now the soldier is younger. So, it will be heartier to “push the tears” on the reader-parents.

"He said that he was going to the border with Ukraine, a business trip until December. He called every day, complained about the conditions: they slept on the boards thrown on the ground, the first three days were fed by the nearby militiamen," says Svetlana Nikolayevna. "It turned out that he needed to sign some document in part, he asked for money for the trip and returned to Maykop. "

Colleagues, journalists, Christmas trees, winders, when you write, look at a little material. Do not think that all readers recently discharged from hospitals for the mentally retarded. What are the militias in the Russian landfill? Do you really think the Russian army is a bunch of idiots? Yes, and goons. And above all this, "stellar satellites" are blind?

Any schoolchild will explain to you that even if some units of a foreign army are located in the units of another army (not necessarily Russian, you can be American or German), they will simply be dressed in the appropriate form. Especially if the representatives of this army are not quite legal there.

Undoubtedly, such representatives in our land were more than enough. But about the "fed" ... I beg you, do not make me laugh.

And the soldier again "escaped" from the place of service. A sort of naughty defender. Sleep on mattresses cold? And if just in the trenches? Yes in the rain? And about the document quite like a childish thing. Illiterate soldier with us. Read not taught. Just write.

“He said that the soldiers were forced to go volunteers,” the woman recalls. “When I was at the reception with the son at the head of the personnel department of the No. XXUMX part, Major Kambarov, he began to shout that now Vanya has only two ways: either to prison or to the Kadamovsky test site. And there are no other options. "

So, where in the text did this major force him to go to Ukraine? Where did Ukraine come from?

The soldier serves in the unit, which is constantly engaged in combat training. And for this and there are polygons. Well, apparently, you can not shoot from the modern weapons in Maykop. Somehow the weapon is not adapted to the peaceful life of a peaceful city. He needs space. Yes, and the soldier must own his weapon, and not just wear it. And to master not only the area where Maykop is located, but also to be ready for service in other geographic areas. Fortunately the country allows.

"Private N. Shevkunov, 30.09.2014, being a soldier under military service under a contract, being part of his unit on a business trip to the Kadamovsky training ground stationed in the Oktyabrsky (rural) district of the Rostov Region, being dissatisfied with the fact that he was sent on a business trip outside of Maikop and the Republic of Adygea, not wanting to endure military service deprivation, with the goal of completely avoiding military service ... left the place of service without permission - the Kadamovsky landfill and descendants Unknown. "

Someone from readers saw the infringement of the rights of the soldier? Any kind of violation of the law?

We saw only a weakling who wanted to live well-work in his hometown. And get a good salary contract. And as soon as it smelled like “hardships and hardships” - everything, “I do not play like that.”

And now the most important thing. That should "break" the hearts of Russian mothers. Soldiers really recruited to war. Like this. Were recruited in the most idiotic way. Some people with no insignia appeared, but with epaulets not lower than a major and directly offered - “go to the militia”. You will receive 8000 rubles a day, you will receive the status of a veteran of hostilities and other nonsense.

Journalists, auuu ... You would have talked once with those who were on the other side. Or themselves rolled once "on a tour." A person without insignia and certificates will not live there for a couple of days. Have you ever Marshall epaulets. There is war, not cinema.

“Agitators came - without insignia, but with epaulets from Major and above. Other contract servicemen called their comrades, who dissuaded: if something happened in Ukraine, they would send you backstage or write to deserters who escaped and accidentally exploded on a mine. Agitators they did not pressure patriotism, but promised almost veteran status to make (gives the right to numerous benefits, housing, etc. - Gazeta.Ru) and pay 8 thousand per day. In fact, I know from colleagues, they threw money at nobody agreed to pay anything. "

And such nonsense is written in a serious newspaper positioning itself. Honestly, having read the material, we somehow even began to understand journalists from the newspaper Novaya Gazeta, “beloved” by us. They at least know something about Ukraine. "Mold" misinformation professionally. And here...

And here we obviously have an attempt to “otmazat” the soldiers, who were afraid of the blessing of which, who had joined the ranks of deserters, were afraid. And nothing more.