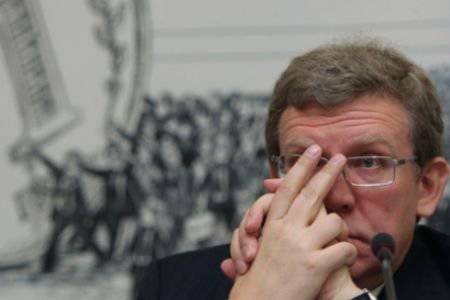 So, in Russia almost the main oppositionist was outlined - Alexey Kudrin, who, according to some, advocated the growth of the nation’s well-being through all-time economy, and according to others, simply expressed the interests of Western speculative groups profiting from Russian resources. It has long been in the Russian political pond with fairly stagnant water there was no such whirlpool, which occurred after the resignation of the main domestic financier.


Kudrin did not just leave his post, having previously declared that he did not support the course of the current president of the country. After leaving, he decided to “snap back” to the person who signed the decree on the release of Mr. Kudrin from all his posts. Obstructive arguments against the financial policy of Medvedev ex-minister expressed in the pages of the newspaper "Kommersant".

In his article, Kudrin continued to express unconcealed disagreement with the plans of the top leadership of the state on spending on education, culture, health care and the military sphere. In his article, Alexey Leonidovich calls teachers, pensioners and the military one of “our many problems”. At the same time, he cites his own calculations, which suggest that the increase in teachers' salaries should increase the expenditures of the country's budget by 100 billion rubles a year. The pension fund, according to his own mathematical calculations, will lose 2012 a trillion rubles in 1, and raising the wages of servicemen will generally cause, as the disgraced financier says, the entire Russian economy almost into chaos.

At the same time, Kudrin is not enthusiastic about the increase in total expenditures on the defense industry to 2020. According to him, such spending is almost unreal!
However, Kudrin does not just criticize, but also comes up with suggestions. True, these sentences painfully remind everything to which we have managed to get used in recent years. The essence of the proposals in general terms is this: according to the logic of Alexei Leonidovich, then:
first, it is necessary, by all means, to achieve a deficit-free Russian budget. This, it turns out, can be done if we base oil prices at the level of 90-100 dollars per barrel. Such prices will allow, again according to Kudrin, to get out of the crisis shocks and even implement certain programs by the 2017 year. In general, this thesis Kudrin proposes to wait a little more before the bright future. But then the ex-minister apparently forgets that elections are at hand, and who in Russia will, before such an important event, convince the Russians to tighten their belts for another 6 years. It turns out no one except Kudrin.

Secondly, Kudrin proposes to introduce a certain rule of spending funds from the sale of hydrocarbons. The rule, it seems, is to build up an economic economic cushion and freeze any social expenditures. At the same time, Alexey Leonidovich recalls that in 2008, it was the financial reserves accumulated thanks to his proposal that helped the country overcome the crisis. However, let's not forget that now the reserves in the country, according to published data, are about $ 500 billion. More precisely, not in the country itself, but in the form of investments in foreign sectors of the economy (currencies, banking sector, etc.). Many analysts say that such a “pillow” is so capable of withstanding any economic blow, if, of course, it does not last for many years. It turns out that if you again save money to a stabilization fund instead of real economic development, then you can turn into Comrade Koreiko, who ate a traditional egg, and kept a million in a suitcase - no matter how much happened ...

In this case, Kudrin either forgets, or deliberately ignores the fact of the almost total use of obsolete weapons, communication systems, and the very principles of warfare. If we stretch this “rubber” for another 15 years, then we can militarily, except with Georgia alone, provided that the latter will not be helped from abroad. It is the third thesis that causes many researchers of the “Kudrin plan” the greatest criticism. Some even suspect the former minister of the targeted destruction of the Russian army. For example, the well-known economist and entrepreneur Andrei Bunich says that Kudrin is in the wake of the West, who, for natural reasons, does not benefit from Russia's gain, neither military nor economic.

Fourthly, the dismissed head of the Ministry of Finance proposes to “decide” on the strategy that concerns the social sphere. Pensions Kudrin proposes if indexed, then not higher than the rate of inflation. At the same time, Alexey Leonidovich again does not indicate what level of inflation. We also have “government” inflation, which is about 7,5% per year, but there is real inflation, which is higher in 1,5 times. Apparently, nevertheless Kudrin, as it is not regrettably conscious of pensioners, speaks of “official” inflation - and, accordingly, an annual increase in pensions on average rubles per 100-150. The increase is certainly substantial ... In this case, it may be better to postpone everything into the state “pot”, and our retired people will endure it to 2017 or 3017.

Fifth, Kudrin considers it necessary to further reduce budget expenditures, reaching the level of inflation in 3%. It remains to ask the question: for what purpose? Is it possible that a person whose pension has increased by 100 rubles per year can afford to take out a loan in this case, even at a lower interest rate than usual.

At the same time, in the theses of Mr. Kudrin slipped one of the key ideas: the indispensable support of foreign investment (read, support for speculative Western business at any cost). It turns out that Alexey Leonidovich sees the development of Russia only in how to attract external interests to the financial system of our country. Well, that is how we went. People will come with dollar bags - they will buy the assets of enterprises for a pittance, and just that - they will withdraw money to their foreign accounts - that's all foreign investment. Let's not forget that last year Kudrin even promised the West a “new privatization”, which would give Russia as much as 800 billion dollars. This is despite the fact that for a year the amount exported abroad is quite adequate to the amount mentioned. And despite the fact that the scale of corruption overlap this amount with interest.

Therefore, it would be better for Mr Kudrin to introduce into his program a thesis about how we can reduce theft and corruption (which is, in fact, one berry field) in Russia, without hanging new backpacks with stones on the backs of the people.

We are in Yandex Zen
Kudrinskaya loop
Will the resignation of Kudrin lead to the rejection of the regime of "currency committee"?
18 comments
Information
Dear reader, to leave comments on the publication, you must to register.