Holiday in the frontline city. Donetsk celebrated the Day of Slavic Literature and Culture 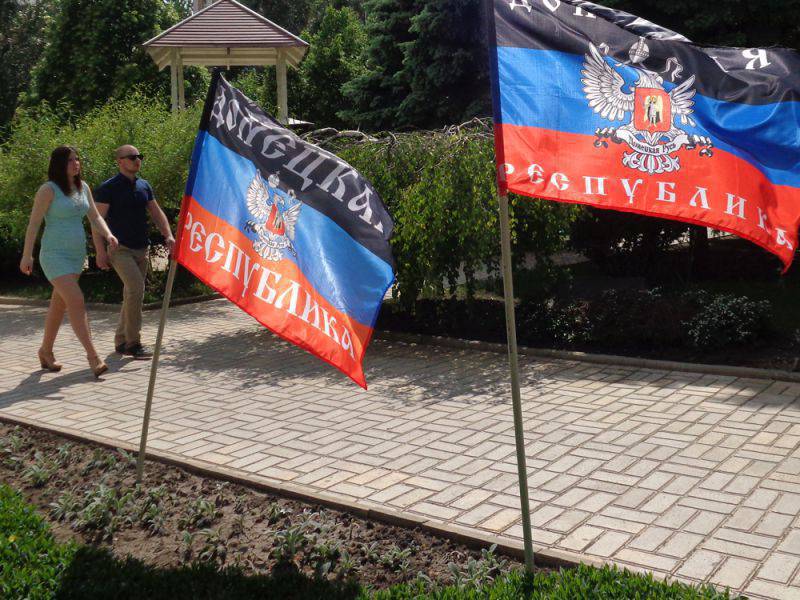 Despite the “Minsk truce”, the sluggish war unleashed against Donbass continues to take lives of people — as defenders of their land who stood up for it from weapons in the hands, and absolutely peaceful citizens. But even in these conditions, people want to live, have fun and celebrate holidays.

24 May Donetsk, despite all the pain of heavy losses, widely celebrated the Day of Slavic literature and culture. The main festivals took place on Pushkin Boulevard, which is very symbolic - the best place for such a day than the boulevard, named after the largest Slavic poet, is not to be invented. 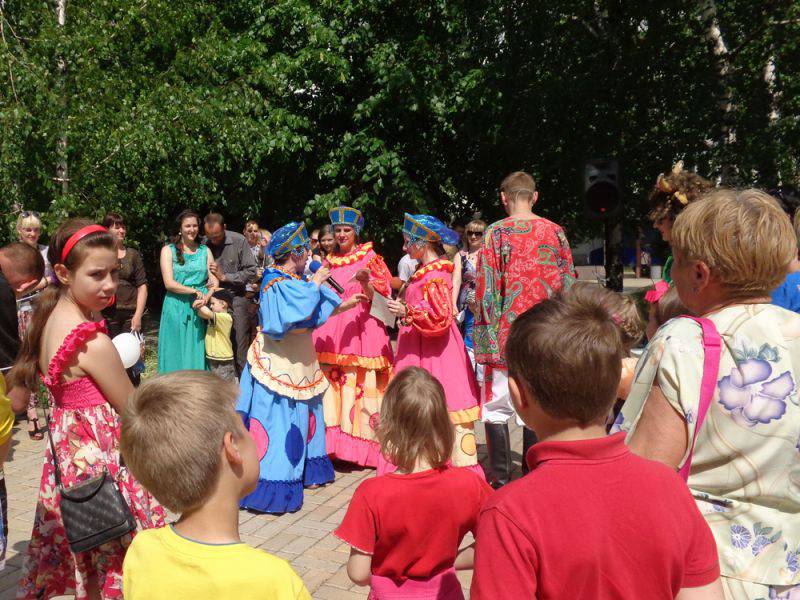 In the afternoon there were mass folk festivals and entertainment for children, in which, however, the buffoons actively attracted adults.

“Each letter of our alphabet carries a tremendous meaning,” said the presenter, showing a sign with the letter “P”. Tell me, what does our city need now?

- Victory !, Holiday! - there were shouts from the crowd.

- World! - Without thinking, both children and adults unanimously picked up.

There was a hitch with the letter "Y", but someone nevertheless exclaimed:

The appearance of newlyweds, who were cheerfully congratulated on the creation of a new family, caused a special enthusiasm among all those present. If at this difficult time, people still "meet, fall in love, get married" - it means that the struggle for Novorossia is not in vain. 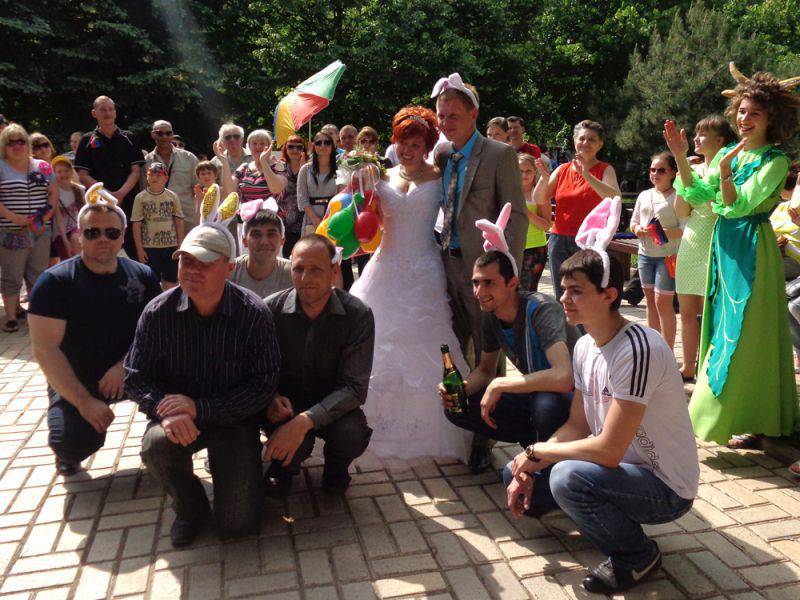 The Deputy Chairman of the People’s Council of the DPR Denis Pushilin, who came to congratulate the townspeople on the holiday, was also involved in the general fun. Joyful children immediately surrounded him, and the buffoons quickly put in a general round dance. 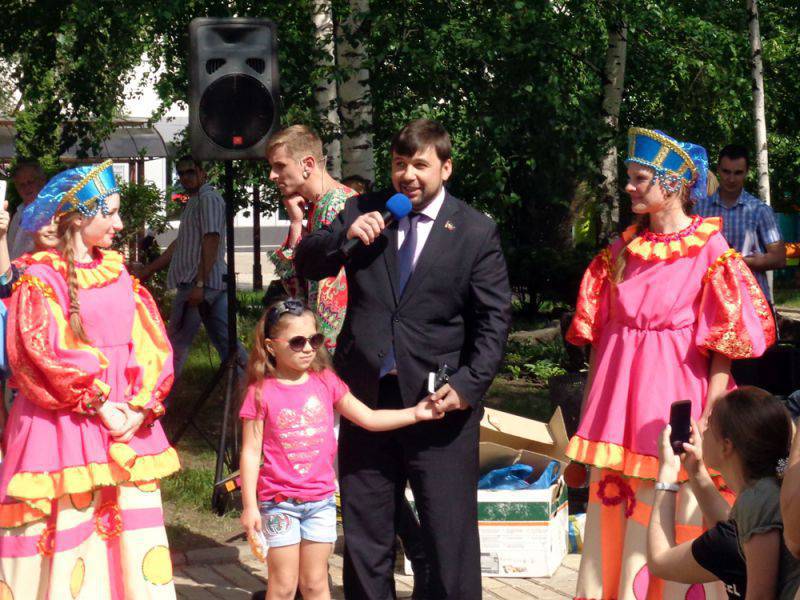 There were songs, people danced merrily. Nearby was a fair of handicrafts. 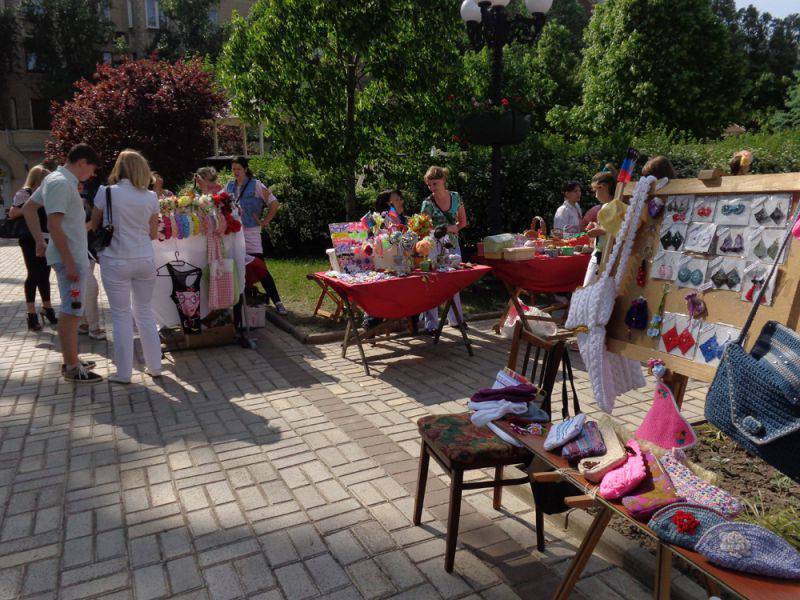 Toward evening, everyone moved a little further along the boulevard - to the building of the Donetsk Drama Theater, opposite which is an amphitheater and a monument to Pushkin. There was a gala concert. But first, a short solemn part was held, during which Denis Pushilin handed diplomas to the best students and their teachers. 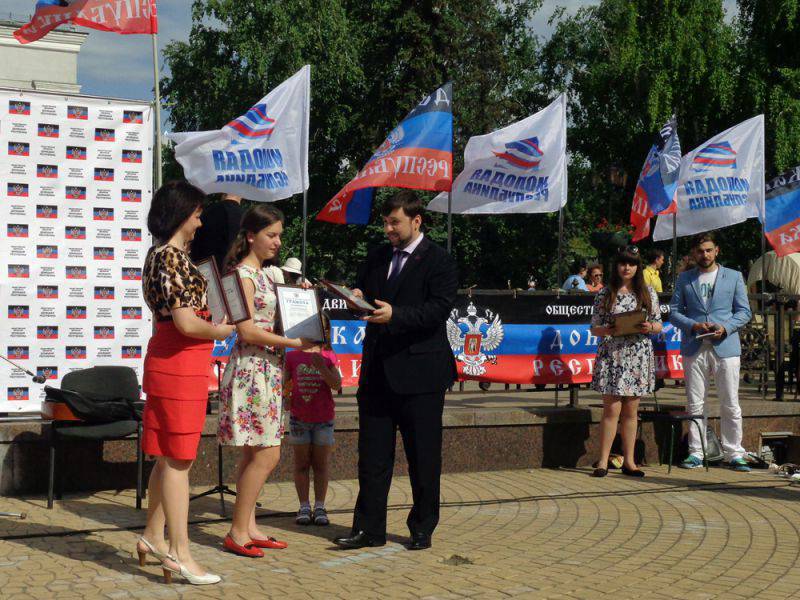 Young poets - students of Donetsk Medical University - presented a collection of poems published by them. They read their works, mostly about their hometown. 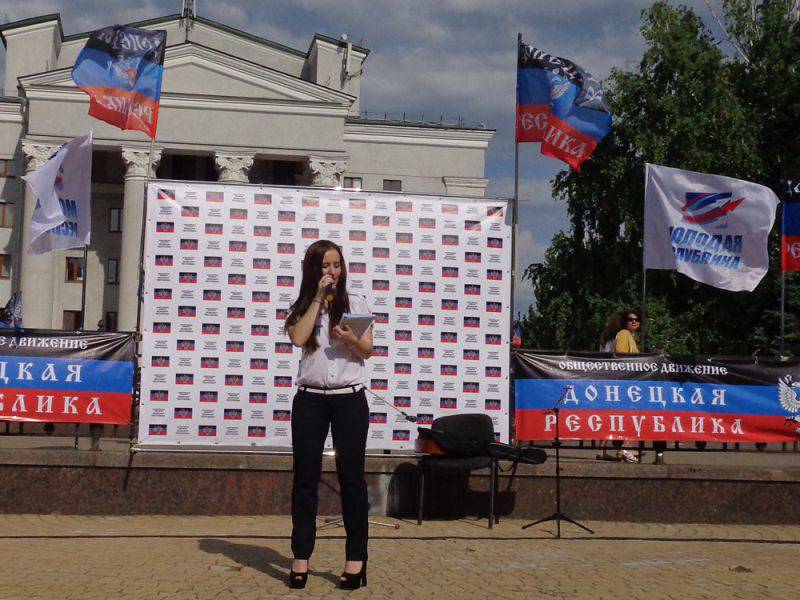 One of the most famous young poetess in the Donbass, Anna Revyakina, performed. Here are the piercing lines of one of her poems: 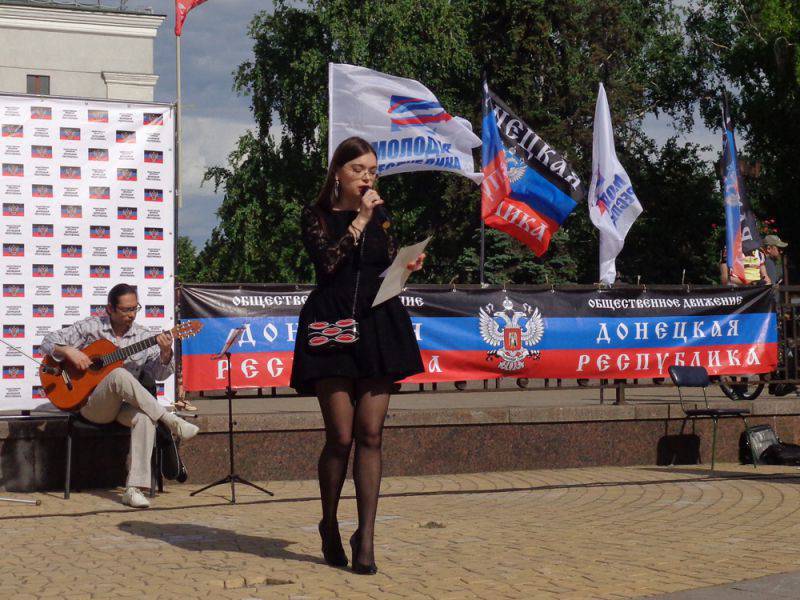 The birds left the city, went to the front,
I wander along the borderline, squeeze an umbrella
and with unseeing eyes looking for your mark.
This city was abandoned by birds, leaving bread
dry out and mold on my palms in the spring.
I can not hear the songs, and the air smelled of war.

Right on the steps of the amphitheater, two groups of painters competed with each other - from the Art and Architectural Schools. Their task was in a short time to portray what they see as Slavic culture. 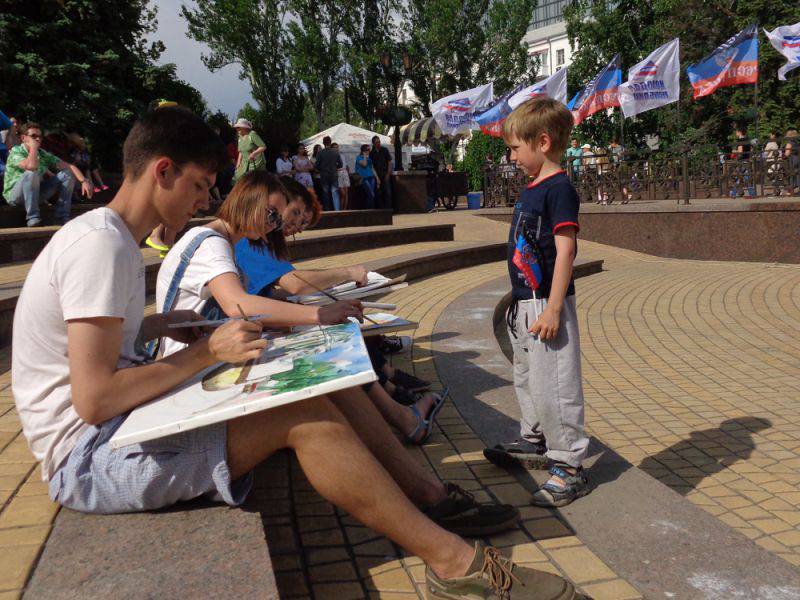 Then they showed the audience what they did. Some guys drew directly from life and depicted an amphitheater, stage and celebration. 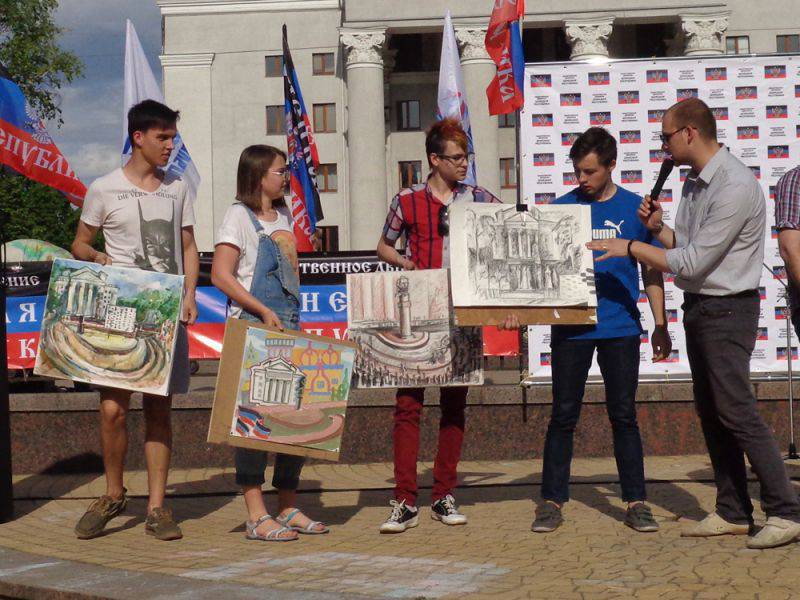 Others are Slavic gods and heroes. 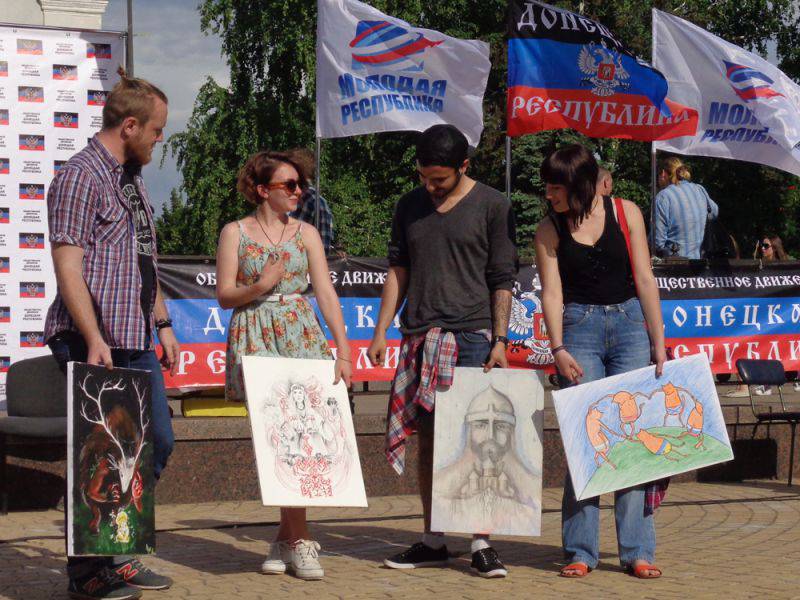 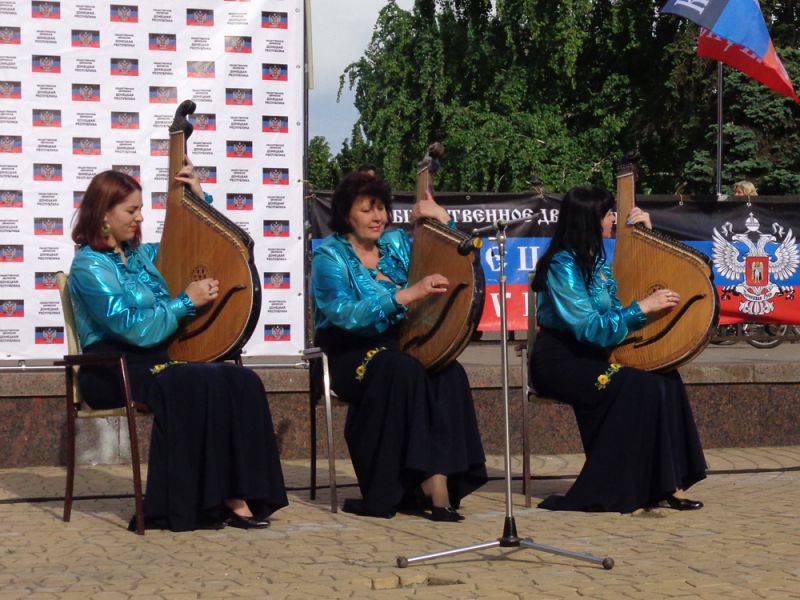 And when a folk group of remarkable women was singing from the stage, suddenly there was a rumble from afar - the fighting nevertheless reminded of itself. But no one ran away - these sounds have become familiar to the city, scorched by war. The ensemble finished the song, as if nothing had happened. 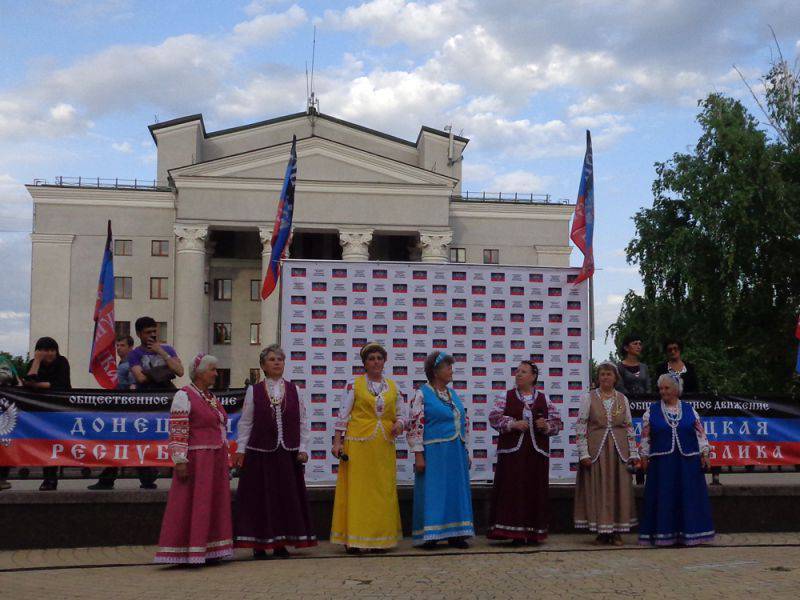 The most impressive moment of the concert was, perhaps, the hot and passionate Dance of Fire, performed by a young man and a girl. Spectators sitting on the steps of the amphitheater were asked to rise higher so as not to be scorched in the literal sense of the word. 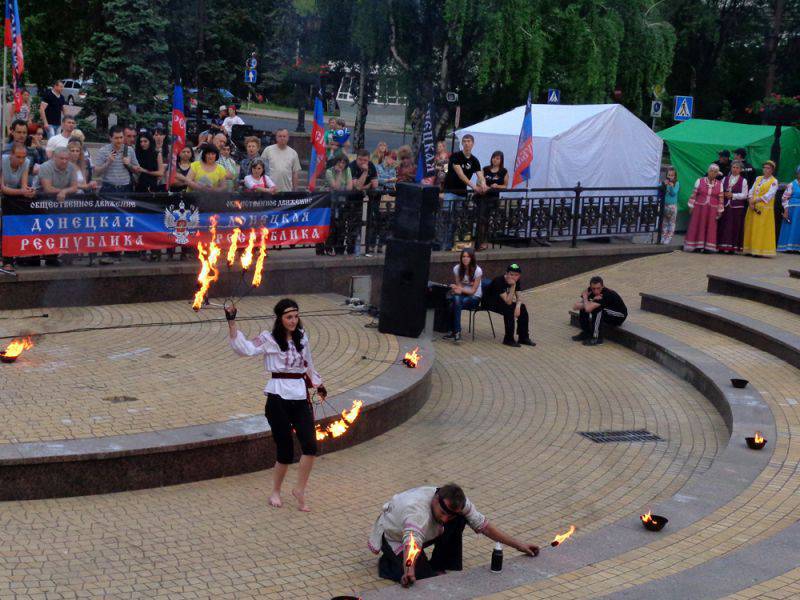 When the time of celebrations expired, the guards asked to disperse - people need to have time to get home, and transport goes to 20 hours of the evening. The organizers (in the role of which the movements “Donetsk Republic” and “Young Republic” took the floor) asked for more time to properly round out. Security forces went to meet and allowed to sing a few more songs. Moreover, the people did not want to disperse ... 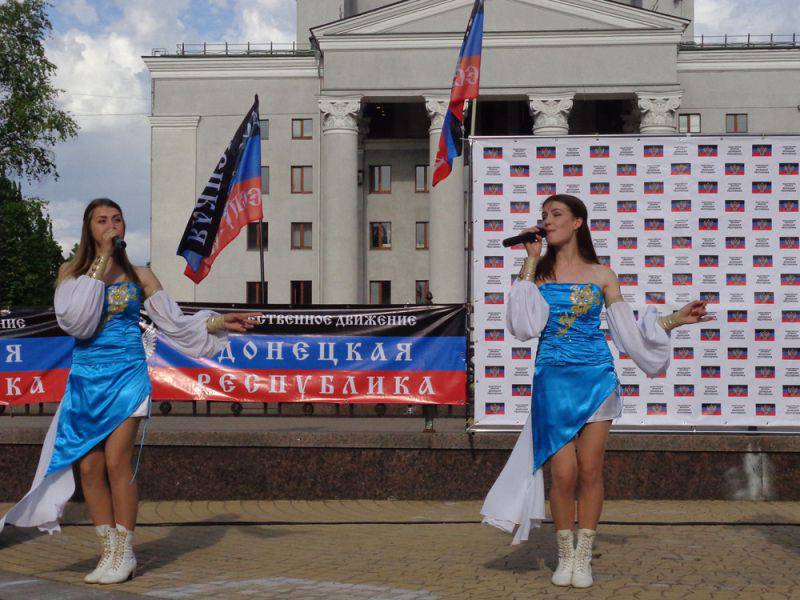 During the years of “Ukrainization”, they tried to deprive these people of their roots, to tear them away from true Slavic culture, to drive them into a common European “paradise”. But Donbass did not allow it to create with itself, and now its inhabitants are celebrating the Day of Slavic literature and culture in full accordance with their moral right, despite all the pain that has befallen them.

floated over the wounded city sounds of the song born in the current battles.

Ctrl Enter
Noticed oshЫbku Highlight text and press. Ctrl + Enter
We are
Donetsk: City Day and Miner's DayThe attacks continue to claim the lives of the Syrians, and the Belt of the Virgin Mary returned to Homs
Military Reviewin Yandex News
Military Reviewin Google News
5 comments
Information
Dear reader, to leave comments on the publication, you must sign in.