MIG crash in Perm. The recorder did not fix the problem 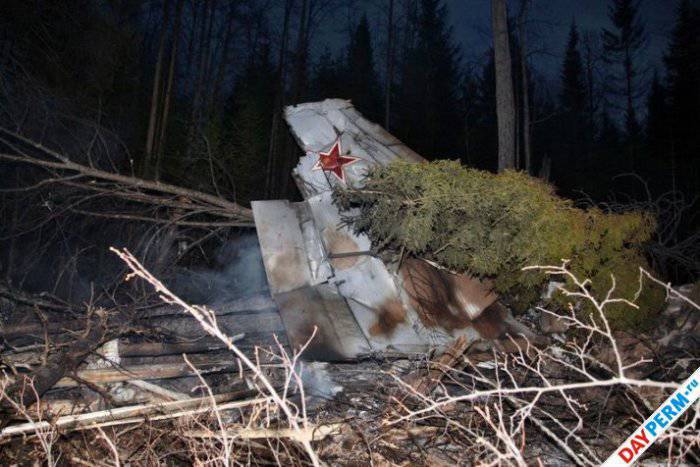 In Perm, the investigation of the causes of the crash of the MIG-31 fighter is approaching the end. The fall of a fighter killed two pilots with aviation base "Falcon", The main cause of the disaster, experts believe the MIG fuel system is malfunctioning. But, according to some media reports, the recorder did not record any malfunctioning of the aircraft’s flight parameters. Consequently, the cause of the disaster could be problems that the recorder could not fix.

And yet, experts are confident that the cause of the MIG crash was most likely a malfunction in the fuel supply system. This was reported to the media by a source who is close to investigating the causes of the disaster. As it became known, the decoding of data from the black boxes of the fighter was completed. As is known, the MIG-31 fighter with the 11 tail number crashed on September 6 in the morning immediately after takeoff from the Bolshoe Savino airfield. MIG-31 carried out a scheduled flight as part of a squadron of four fighters under the command of the crew commander Lieutenant Colonel Sergey Stolpyansky and navigator-operator Major Andrey Gorbachev. The board that crashed was driven by a second pair. The flight was carried out in low cloud conditions. A few minutes later, immediately after the fighter took to the air, the plane tilted and fell into the field. The crew did not have time to eject and died.

The Military Investigation Department of the TFR of the Perm garrison on the fact of the plane crash and the death of the crew opened a criminal case under art. 351 of the Criminal Code of the Russian Federation (violation of flight rules or preparation for them, resulting in the death of a person). At the Sokol airbase, which included the aircraft, the Ministry of Defense, the military prosecutor's office and the state security agencies conducted a thorough investigation of all its work. Already in the course of checking the possible cause of the death of the pilots, their colleagues put forward a version of the aircraft’s failure. They speculated that, apparently, the pilots "could not see" the ground and until the last seconds remaining before the fall, they hoped that the plane would not fall on people.

Colleagues of the fallen pilots claimed that Sergei Stolpyansky was a very experienced pilot. He already had the experience of forced landing MIGs. So, in 2003, he made a test flight on the MiG-31 after its overhaul at one of the repair plants. “During the flight there was a break in the pipeline, which operates under high pressure,” says one of the colleagues, “by some miracle, the fuel did not catch fire.” I had to land on only one engine running. Already on the ground several tons of kerosene spilled out of the fuselage. ” Then, during the investigation of the causes of the incident, it turned out that the gasket was installed in the pipeline with non-compliance with the technology.

To clarify the situation with the disaster MIG would help decoding the flight recorders of the aircraft. The recorder of the crew’s negotiations was found on the very first day after the accident, but he was badly hurt, and it was almost impossible to decipher it immediately. According to sources, the parametric recorder was found on September 9. He was found on top of a tree near the site of the fall of the MIG. According to the testimony of colleagues of the dead pilots, decoding the records of the parametric recorder revealed no violations in the technical parameters of the aircraft. At the same time, it was revealed that after the climb, the plane tilted to the right. Then the plane even more "sank" in the right direction and at the same time suddenly began to decline. When a little less than 80 meters were left to the ground, the crew tried to level the plane and gain altitude, but this was not possible. According to experts, in order for the aircraft to be able to gain the necessary height for the maneuver, the pilot had to switch the engine control knobs (RUD) of the MIG to the “maximum” mode. But during the investigation it was found out that only one of the OREs was transferred to the “maximum” mode. Experts say that it is unrealistic to do this by accident, therefore, Lieutenant Colonel Stolpyansky had some good reasons for him to try to gain altitude on just one engine.

And already at that time, an assumption was made that the technician at the MIG Stolpyansky refused, and this failure could not be recorded by the recorders. Recently, a source close to the airbase said that the flight data recorder of the fallen MIG did not record the equipment failures. “There are no official conclusions regarding the catastrophe yet. The fact of failure of the equipment, apparently, was established not in the course of the study of the records of the flight data recorder, but as a result of some other analysis, for example, the study of the remains of the crashed aircraft. ”
Ctrl Enter

We are in Yandex Zen
The accidents of military aircraft in Russia over the past 10 years
3 comments
Information
Dear reader, to leave comments on the publication, you must to register.