Not true of war 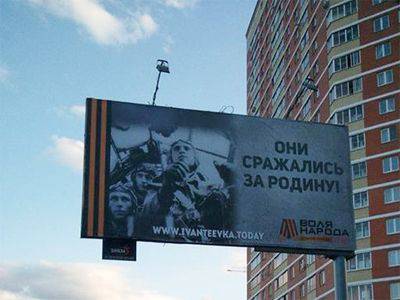 For many years now, every spring, the same sad picture has been observed on Russian open spaces. In preparation for the celebration of Victory Day, heterosexual blondes from public relations departments of administrations of any level generously decorate the streets with photographic posters with German tanks and airplanes. At the same time, the same individuals from mass disinformation urgently download from the Internet the “terrible truth” about the war, which “vigilant communist censorship" hid from the people.

And now, on the eve of 9 in May, a billboard appeared on the streets of Ivanteevka near Moscow with three brave pilots of “Junkers” and the words “They fought for their Motherland!”, And Komsomolskaya Pravda told how the Soviet command, desperate to stop the enemy rushing to the capital tanks, paratroopers dropped them without parachutes. They say that the P-5 aircraft carried fighters with anti-tank guns in the outboard containers of inventor Pavel Grokhovsky, diving, shaking them into snowdrifts, and the landing force famously burned German armored equipment that was completely embarrassed by Russian insanity.

I already lost count, collecting different versions of this nonsense. In science fiction writer Yuri Sergeyev in the novel “The Prince's Island”, Marshal Zhukov personally directs the TB-3 heavy bombers to send a parachute assault force that destroys the German tank column behind Mozhaisk, but almost all the paratroopers are either killed or crippled. The underequired pilot, and now Archpriest Alexander Togotin insists that the fighters jumped from the American "Douglas" and not one was left alive. Where the drifts came from in October 1941, when, capturing Mozhaisk, the Germans came to Moscow, they didn’t explain the science fiction writer with the archpriest, and therefore in the program Andrei Karaulov, known for impeccable truthfulness, the operation was transferred to the Soviet-Finnish war, and the paratrooper died, crammed on the peaks of the tree

There is also the lieutenant of the parachute units of the Wehrmacht, Alkmar Gove, from whom this duck flew into the light, stating that during the Vyazma landing operation, Soviet aircraft flew over the snow-covered fields during the Vyazemsky landing operation and dropped infantrymen with weapons without parachutes right in deep snow ". Gove is more convincing than Russian borzopistsev: he has a case in winter 1942 of the year, when snow was in bulk, but Ivan Starchak, who fought near Mozhaisk and under Vyazma, head of the paratrooper service of the Western Front, refuted his stories. Ivan Georgievich describes in detail the experiments on jumping from low altitudes, but the “Russian way” invented by Gove suggested that the author should try it himself - for some reason he did not.

But what about Grokhovsky's containers? At the end of 1931, Grokhovsky and his assistant, Ivan Titov, tested their “airbus” - a streamlined closed trolley dropped from a low-flying reconnaissance aircraft P-5 (confusing Russian and Latin font by Komsomolskaya Pravda) renamed it to П-5). The “Airbus” rolled around the airfield, and the inventors who were surrounded by fur coats even survived, but the heavier devices dropped from high altitudes and not on a smooth runway were rigorously broken. The experiment failed, so later only unbreakable loads were dropped without parachutes. As for the fighting for Mozhaisk, the paratroopers did not land there at all, but fought like ordinary infantry. What Starchak himself writes in detail, and also testifies to Georgi Konstantinovich Zhukov, who then commanded the Western Front.

"IG Starchak's detachment after the explosion of the bridge took up defense along the Ugra River. Soon it was supported by a detachment of cadets from Podolsk military schools under the command of Senior Lieutenant LA Mamchik and captain Y.S. Rossikov. Attempts by enemy troops to force the Ugra river and break through Medyn successfully reflected the heroic actions of these units.As a result of the five-day fierce fighting, few survived, but with their heroic self-sacrifice they thwarted the plan to quickly capture Maloyaroslavets and helped our troops to win e time to organize the defense of the approaches to Moscow. "

Later, during the battles of Vyazma, Starchak froze his legs, but, despite partial amputation of his feet, he continued to be thrown into the enemy's rear (he completed 1096 jumps in his life), ended the war in Berlin, and then participated in operations against Bandera. His life and exploits are ready-made material for novels, and for exciting movie fighters, but urgently repainted into patriots and tabloid reporters, to all appearances, it is more interesting to jump on the rake of a long time refuted lies ...