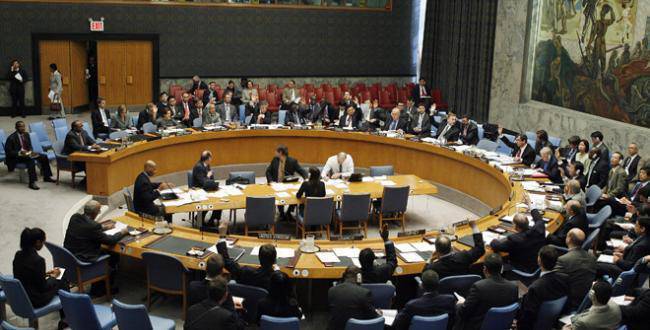 Russia and the PRC delayed the start of a major war in the Middle East. Representatives of both powers exercised their right to veto when voting in the UN Security Council. The “Libyan scenario”, which has already launched the famous 1973 resolution, at least will not happen again.

The resolution was introduced to the UN Security Council by a number of European countries - France, Great Britain, Portugal, and Germany. The document strongly condemned the “serious and systematic violations of human rights” committed by the Syrian authorities. The authors of the “European” resolution demanded “an immediate end to” the violent actions and called on both parties to reject extremism and violence. It was proposed to start an open political process, free from violence and fear. Direct references to sanctions of the world community were removed from the final version of the document. But it reported on the readiness within a month to consider how Damascus will fulfill the requirements of this UN resolution and, if the Syrian government does not fulfill them, consider the issue of taking “targeted measures”.

In addition to the sponsor countries, five other states voted in support of the draft resolution on Syria - the United States, Bosnia and Herzegovina (BiH), Colombia, Gabon, Nigeria. Three BRICS member countries abstained - Brazil, India, South Africa and Lebanon. According to the UN rules, for the document to be adopted, 9 votes from 15 members of the UN Security Council are required, which was done. But provided that none of the permanent members of the Security Council (5 of all states there) will use their veto power. This time, two powers took advantage of this right - the Russian Federation and the People's Republic of China.

According to the representative of Russia at the UN, Vitaly Churkin, the “European” resolution was built on the “philosophy of confrontation”, reflected only the one-sided accusatory bias towards the Syrian authorities, and contained an ultimatum threat of sanctions. According to the Russian diplomat, the document did not take into account the proposals of Russia on the wording on the inadmissibility of military intervention from outside. Russia pointed to the need to avoid repeating the “Libyan scenario” in Syria. The situation in the Syrian state can not be considered in the UN Security Council in isolation from the Libyan experience, - said Vitaly Churkin at the last meeting of the Council.

It has been openly declared about “armed gangs”, who are armed with smuggling weapons, sabotage equipment. These gangsters "seize settlements, kill and repair atrocities against law enforcement officers and civilians, smash and burn state institutions," a Russian diplomat said. Therefore, Russia sees the optimal way out of the crisis in that the world community refuses to provoke a confrontation, uniting all the responsible members of the UN to establish the internal Syrian political process. “There is no alternative to dialogue, nor can there be,” Churkin stressed. If the Syrian opposition believes that the system is not perfect, then we must respond to the proposals of the authorities, start a discussion to promote their ideas.

Churkin said that Russia and China had offered their own version of the resolution to the UN Security Council, but it seemed to Western countries “not tough enough.” On the basis of the Russian-Chinese document one could create a truly “collective constructive position” of the world community. And the West is still engaged in "legitimizing unilateral sanctions already adopted and attempts at forceful change of regimes," the Russian diplomat said.

According to Churkin, we see the development of the strategy that has already been used in countries such as Côte d'Ivoire and Libya. Its essence is that Western leaders proclaim the legitimate leader of the country to be illegitimate, and his rivals as the “sole legal representatives.” According to Russia, the legal representatives of the country should be determined not in the West, the people should do it.

The reaction of the West

The position of Russia and China, which thwarted the current attempt to arrange a war in the Syrian state, caused a harsh, almost hysterical reaction of Western politicians. Fell charges of supporting "dictatorial regimes."

Susan Rice, the United States Permanent Representative to the United Nations, said that the Syrian people, who were “striving for freedom”, had been hit in the face by some members of the Security Council. According to her, the people of Syria and the entire Middle East region were able to see who among the UN members "are on their side for a better future, and who are doing everything to protect dictators on the warpath."

The Permanent Representative of France, Gerard Aro, made a promise that: “Veto will not stop us”. True, without specifying what he means.

The head of the US Department of State, Hillary Clinton, said that the Russian Federation should explain to the Syrian people the reasons for which it used its veto against the Syrian resolution, which condemned the suppression of unrest in the state. Clinton expressed regret that the UN Security Council refused to take responsibility for the fate of the Syrian state.

In the West, it is now feared that, having received the support of China and Russia, Assad "will begin an even more ferocious persecution" of the opposition.

Damascus expressed its gratitude to 6 for the UNSC member states that refused to support the resolution, which provided for the possibility of strengthening the sanctions regime against Syria. In particular, the Syrian authorities are grateful to Moscow and Beijing for imposing a veto on the draft resolution.

Syria is confident that Russia's firm position has saved the country from foreign intervention. If it were not for the decision of Moscow and Beijing, then the fate of Iraq, Libya and Afghanistan would have been prepared for our homeland, said presidential adviser Bashar Assad Bussein al-Shaaban. Damascus will take advantage of the resulting respite and bring the reforms begun in the state to the end, she said.

The official representative of Syria to the UN said that from the Damascus point of view, the outcome of the vote in the UN Security Council is talking about returning to the world politics the principle of multipolarity. On the world stage, “forces have reappeared capable of protecting nations from injustice, interference, and intervention.” In Damascus, at the embassies of the Russian Federation and the People's Republic of China, meetings of supporters of Assad and peace in the country were held, they expressed gratitude to the Syrian people in Moscow and Beijing.

One of the representatives of the Syrian opposition said that China and Russia supported Bashar Assad in his "military and fascist project."

It is clear that the West will not stop, the process is running. Further, two scenarios are possible, according to the first, Russia and China will be “convincing” to adopt a new resolution. So, Susan Rice has already announced that the issue will again be brought up for discussion by the Security Council in the very near future. In Syria, they will continue to “rock up” the situation in order to present new “evidence of the atrocities” of the Syrian regime.

In the second case, the West can spit on the United Nations and simply begin military intervention, as in 2003, in Iraq. To begin to tighten the sanctions, to organize a major provocation, such as "hitting the Syrian rocket" in Israel. Or present an ultimatum about a military strike if Assad starts a counter-terrorist operation in any city again. And organizing unrest will not be difficult.

Ctrl Enter
Noticed oshЫbku Highlight text and press. Ctrl + Enter
We are
Geopolitical mosaic: the British resolution on Syria received a veto from Russia and China, and the Americans decided that it was time to stop the dictator ObamaSyria: Americans scare themselves, and Asma Asad buys chairs
40 comments
Information
Dear reader, to leave comments on the publication, you must to register.