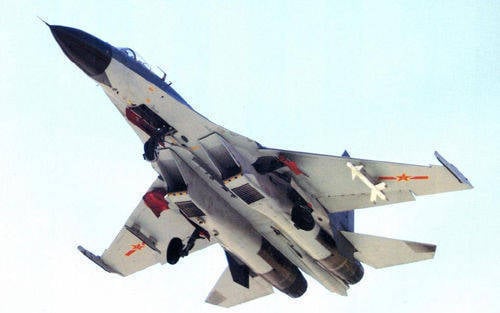 According to the Canadian online magazine Kanwa Defense Review, China, based on the prototype of the J-11BS two-seater training and combat aircraft (the “China” version of the Su-30), created a more advanced modification of the J-11BSM, which is equipped with domestic on-board avionics, radar, electronic warfare systems and able to use modern types of Chinese aircraft weapons, which was not available for J-11BS / Su-30.

J-11BSM is designed to give the PLA Air Force the ability to perform strategic "offensive and defensive missions." The Chinese Air Force has an inadequate number of Flying Leopard JH-7 heavy fighter-bombers, besides, these planes do not have high combat capabilities. J-11BSM is the "best option" to enhance the capabilities of the PLA Air Force, the magazine writes.

China has invested in the creation of this option "a lot of money." As soon as a sufficient number of J-11BSM appears, this factor allows to eliminate the drawbacks of the PLA Air Force. The aircraft has the ability to refuel in the air, strike at long distances, it will be possible to integrate on them new types of Chinese weapons.

The magazine also writes that Mikhail Pogosyan, head of the Sukhoi Design Bureau, publicly stated that Russia has never made claims against China in “plagiarism” and that he “firmly believes that China is upgrading its aircraft using its own technological components.”
The British magazine Jane's Defense Weekly published an article in which he noted that China had reached a “deep understanding of the Su-27 / 30 technologies” and that the charges of infringement of intellectual rights are “biased”.
Australian magazine Air Power Australia writes that J-11B / BS only looks similar to the Russian Su-27SK and Su-30UBK, but the internal filling is completely Chinese - digital data line, IR detection system, "glass cabin", EW system . According to the magazine, the Chinese versions have "their own unique design." “In particular, J-11B / BS are equipped with modern on-board equipment, which has never been in the Russian Su-27 / 30, moreover, now even the engines have begun to change to Chinese,” the magazine said.

The American aerospace magazine Aviation Week & Space Technology posted comments that the Chinese J-11B fighter, in terms of its technologies and methods of mass production, "distanced itself far" from the Su-27/30 and "became one step closer to Western standards." "If China wants to create a multifunctional fighter, then its capabilities will be equivalent to the American F-15E," the magazine writes. Further, the publication notes that China is currently capable of developing its own new generation fighters, AWACS and control aircraft, electronic warfare aircraft and a wide range of high-precision aircraft weapons. Once the J-11BS / BSM enter service with the PLA Air Force, China will have more opportunities to dominate the Taiwan Strait, East China and South China Seas, the magazine notes.