Does Washington move to Plan B?

March 30 2015
113
The recent absence of Vladimir Putin in the media field, some jokers explained that "he changed the world." But the world has really changed. It has become less "Ukraine" and more platitudes of life. Perhaps this is due to the last few unexpected events that occurred in Washington, much more significant than the "Ukraine".

Apparently, this was expressed in the scandalous speech in the US Congress of the Israeli Prime Minister, who attacked the US President Obama. The president was confronted with the fact of this speech; he did not attend it and did not later meet with the leader of Israel, his strategic partner in the Middle East.

Formally, the political casuistry became a stumbling block. Obama suddenly began to insist on some kind of Palestinian statehood. Approximately the same as on "respect for the sovereignty of Ukraine." The Israeli prime minister said that Palestinian statehood is impossible, and US President Obama threatened Benjamin Netanyahu with a revision of the entire US Middle East policy.

Our unkind acquaintance, Senator John McCain, immediately advised the US President to stop hysterics and overcome tensions between the United States and Israel. The signing of the UN resolution recognizing the Palestinian state, planned by Obama, according to McCain, should be completely excluded from the agenda, since "contrary to American policy, which was carried out by at least the last presidents 10". Recall: McCain lost the presidential election to Obama, that is, he could, in principle, become the president of the United States. 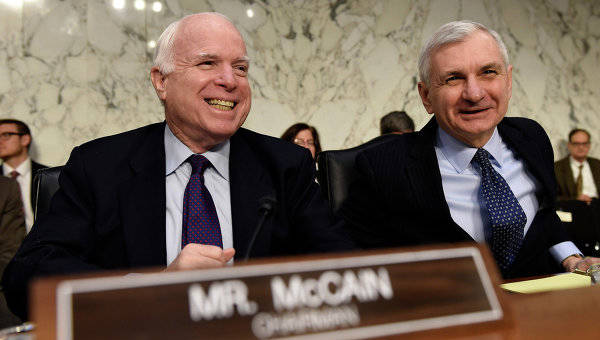 But Obama is not going to yield to McCain and Israel. In fact, Obama is "throwing" Israel now, his strategic partner in the Middle East, picking on the Palestinian "trifle" according to McCain.

The same thing happens with Ukraine, which intends to sell to Washington as a strategic partner. It would seem that the already resolved issue of supply weapons to Ukraine, which the same McCain punches, Obama hung in the air: he and his friends, all hesitate.

And everything goes to the point that there will be no arms supplies to American Ukraine. There will only be calls to be friends against Russia. Obama just ignored a request for a meeting of NATO Secretary General Jens Stoltenberg, although the head of the alliance was in Washington and asked for a meeting, reports news Bloomberg agency. This event is also out of the category of scandalous: earlier, the US presidents did not allow such a thing.

Obama's change in politics was felt by his Kiev puppets, and they allowed themselves boorish attacks on the US president. Anton Gerashchenko, Avakov's worthless assistant, compared Obama himself with an ostrich that buried its head in the Crimean sand. And imagine, he is still alive!

Judging by these impressive facts, Obama and his team, led by Secretary of State John Kerry, change the course of American democracy and at the same time “throw” their strategic partner in the Middle East (Israel) and the Bandera Ukraine dreaming of a strategic partnership. And even the partnership with the European Union is questionable.

What is common in these fundamental shifts in American politics? Apparently, a financial issue. 27 February of this year, former Fed Chairman Alan Greenspan, in an interview with CNBC, said that the US economy is in an extremely precarious position.

And 12 in March, renowned economist Walker Todd made the following statement: the US economy has about "60-90 days of life, because the dollar is on the verge of collapse." Todd is also “that”: 20 worked as an economic adviser at the Federal Reserve Bank of New York and at the Federal Reserve Bank of Cleveland for years, and now is a professor at the Center for Financial Financial Alternatives at the Cato Institute.

However, the palm must also be given to well-known expert Dave Hodges, who said, “if Dr. Todd's prediction is accurate, it fits into what other sources say about the very near future and reflects my position.” He believes that such a “false flag event” can be used as an excuse to impose martial law in the United States.

In other words, President Obama and the US Federal Reserve run out of dollars, not only to Ukraine, but even Israel, which is the largest recipient of US aid. Washington is creating a political excuse to deny this assistance to Israel. The largest holder of US debt obligations is Saudi Arabia, and Washington is forced to make political concessions to its Arab creditor in the form of support for Palestinian statehood.

China and Russia, by the way, are also lenders of the US Federal Reserve, and enmity with them does not increase the financial stability of America. According to the latest information, they began to withdraw from the securities of the US Federal Reserve, and, probably, not only they. It is noteworthy that Alan Greenspan, the former Fed guru, made his sensational statement one year after the start of the Russian-American aggravation.

Until recently, Washington adhered to "Plan A" in overcoming its financial problems, which the "war party" in the USA loudly trumpeted to the whole world: Brzezinski, McCain, Biden, Brennan and their henchmen - and demanded urgent supplies of weapons to the Kiev junta. And toughness in the Middle East. This is the plan for America’s exit from the financial crisis through world wars, primarily with Russia.

In Ukraine, "Plan A" was dangerous for its unpredictable military consequences: a direct US military confrontation with Russia in the steppes of Ukraine. But the fresh experience of the Crimea and the Donbass, and the evasive policy of Europe, had a sobering effect on Washington.

Some American analysts, well-known enough to be known in Russia, said quite recently the following: Washington will try to leave Ukraine as quietly as possible. The costs are too high ... In fact, they said about Washington’s Plan B in the former Ukraine, and judging by the Netanyahu scandal, in Israel.

“Plan B” of the United States - “to leave quietly” from Ukraine and the Middle East, can be associated with the name of President Obama, but really behind it is Secretary of State John Kerry and those who stand behind him, and whom we do not know well. But we certainly never saw Kerry in the same company with McCain and Biden.

Obviously, the world is facing a new financial crisis, and parties A and B are fighting in Washington for ways to solve this crisis. Which one of them will win is not clear. But Washington’s marionettes in Europe, Israel and Ukraine already have chubs cracking. But Russia remains one thing - to keep the powder dry. Together with China and other BRICS and SCO countries.