The EU's Armed Forces: are we called again to Berlin? 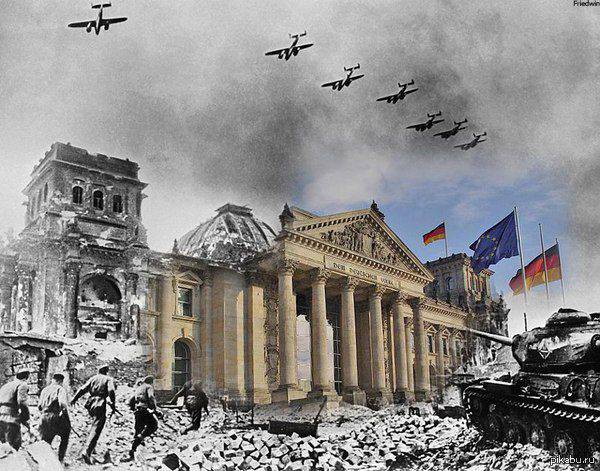 EU bureaucracy will stop at nothing to survive

8 March 2015 of the European Commission (EC) President Jean-Claude Juncker made a very interesting statement that he considered it necessary to create a pan-European army. The main task of such armed forces, according to Juncker, should be the containment of Russia. News particularly noteworthy in conjunction with the work on the creation of the EU Energy Union, whose goal is to create a pan-European body that will fully control and coordinate the energy policies of all countries of the Union. What will such global steps lead to, and what goals can they pursue?

Over the past year, it has become clear to almost everyone that the sovereignty of the EU member states is very low, and does not allow any of them (even the leader - Germany) to make independent foreign policy decisions. This showed the unanimous adoption of anti-Russian sanctions and the refusal of Bulgaria from the South Stream - many EU countries “voluntarily” refused billions of euros for their citizens and budgets. And if there are still some countries that at least somehow cast their vote against what is happening (the Czech Republic, Hungary, Greece), then after the creation of the common armed forces and the Energy Union, European countries will have no sovereignty at all. In fact, the status of small EU countries will be the same as that of the Soviet SSR. In fact, the policy of the whole EU will be "driving" in Germany and, in part, in France. The UK is unlikely to agree to such conditions, and, most likely, will then be released from the EU (this idea is already popular in Foggy Albion). That is, in fact, we are witnessing an attempt to close the power over the lion's share of European countries in the hands of Germany alone. Already, there is a decline in production in small countries and new EU members, due to flooding them with more competitive goods from Germany and France. At this rate, it will be possible to reach even a certain analogue of the planned economy - Poland produces agricultural products, Germany is engaged in mechanical engineering, the Baltic sprats, etc.

NATO without the USA or against the USA?

Juncker's idea of ​​creating a single EU army probably comes from the German Chancellor Angela Merkel, who actually “arranged” the policy for the position of President of the European Commission. Immediately the question arises - what is the purpose of creating such troops, if the overwhelming majority of EU countries already belong to NATO? It would seem, where else can you get a more anti-Russian organization, and even with such a powerful ally, as the United States? It becomes clear that the voiced goal of containment of Russia has no real grounds and was uttered to distract the eyes. And how can one, in general, by military means restrain a country possessing enormous strategic nuclear forces? By the way, for small tasks, such as peacekeeping missions, the EU already has EUFOR (European Union Force) rapid response forces, their numbers are about 10 thousand people. Apparently, those same Germans were very tired of existence in the format of a partially occupied country, which still disintegrates the “fruits” of the Second World War. NATO, in combination with the network of American bases in Europe, is one of the main instruments for monitoring the “behavior” of Germany. In fact, we can talk about a sort of attempt at revenge and the acquisition of lost sovereignty, as well as the "soft" capture of Europe.

That is, the overall picture and goal can be this: create common EU Armed Forces, motivating them with the threat posed by the Russian Federation, thereby trying to "put dust" in the eyes of the US, and then begin to slowly withdraw from NATO, remove American bases, etc. As for the purely military capabilities of such a bloc, they are very large. Germany has an excellent school of ground-based technology, France has the ability to create modern fighter jets, and most importantly nuclear weapon. That is, the EU will not have problems with equipping its troops - there would be means and desire. The number of such aircraft, if necessary, can be enormous - the population of the EU countries is now more than 500 million.

Back to Berlin again?

In fact, the above scenario represents a threat in the future, both for the United States and for the Russian Federation. The Russians are not able to tell about what the Germans are capable of, if they “get into a passion”. And what is most interesting, in the long term, the strengthening of independent German Europe may again bring together some of the old allies in world wars, at least temporarily. Of course, the United States, as always, will try to get its benefit from the situation, while at the same time weakening Russia to the maximum. By the way, it’s not necessarily a global war, it’s possible to increase the number of large local conflicts in neutral countries, an attempt to pull countries from one camp to another, economic wars are all the tools that appeared after the creation of nuclear weapons. True, unlike the world wars of the twentieth century, now another powerful player has appeared in the world - China. And this time, in the rear of the Russian Federation, there is not hostile Japan, but quite a practical, ready-to-cooperative, Celestial Empire.