March 12 2015
10
Always welcomes the desire to help their country in a minute of testing. It cannot be otherwise: every citizen must do what he can. You can shoot, shoot, strike - strike, sing well - sing the songs to the soldiers. Recall the feature film “Hussar Ballad” ... They just announced that “Bonaparte troops forced the Neman”, the ball was interrupted, the ladies were leaving, but then they decided… to nip the hospital for the infirmary, that is, the next day! Of course, there are nuances. For example, the senator can, using his connections and the power to push through his own, and not very high-quality, “invention,” and the soldiers will have to pay for his “originality”. The proposal may be ahead of its time, as was the case with the dynamo-active armor of an Odessa resident, Paliichuk, who offered it as early as the end of the 20 of the last century, but was not understood by patent specialists. And sometimes decisions are too obvious, do not exceed a certain level of novelty, which just raises them above other modern "inventions".


And just one such development was the machine (although it is sometimes called a tank!) Developed in France in November 1914! It was developed by two people in whose honor it was named: engineer Preto and Jules Louis Breton, a member of the French National Assembly. Apparently even then one of them came up with the idea that not today, tomorrow, the French troops on the battlefield will encounter (or have already encountered!) Powerful wire fences that they cannot easily overcome.

Barbed wire barriers had to be confronted first of all by the British during the Boer War. But there was also a French Colonel Wilbois-Mare, who reported to France about all the vicissitudes of this war and gave appropriate recommendations. To listen to him, as is often the case, no one listened, but ... the bell rang. 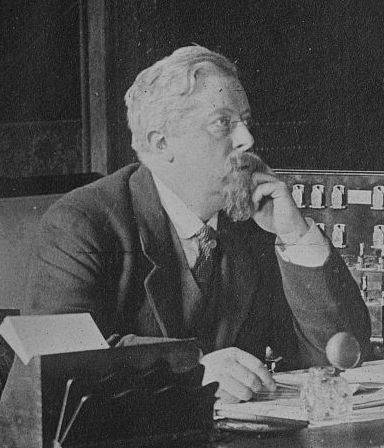 And Jules-Louis Breton (1872-1940) decided that if there were such barriers on the battlefield, French soldiers would just have to cut them, not with scissors, but with the help of a special vehicle. The first version of the car was a small circular saw set in motion by an engine of six horsepower and mounted on a four-wheeled cart, which had to be pushed back manually. The device was tested in January 1915, and found that there was little practicality in it. Immediately the question arose of putting this “device” on the tracks, but since it was not possible to get a single tracked chassis at that time, we decided to start off with a wheeled tractor.

At the end of February, the 1915 was replaced with a circular saw with two small vertical saws with thirteen teeth, but a large horizontal circular saw was left in order to cut off the fence posts just above ground level. The teeth themselves were fixed and served only to grip the wire, and they were cut by their special chain set up according to the principle of modern power saws. In July, the design was changed again, the horizontal saw was removed, and shields were installed to protect the wheels. And eight small bronze cannons were loaded into the car itself in order to increase its mass. Here, by the way, it is impossible not to think about A. Porokhovshchikov's “Rover”. He was too light and could not throw down the pillars or tear the wire with his weight. In this case, as you see, even a tractor that cut the wire needed a large mass!

After a satisfactory 22 test of July 1915, Minister of War Alexander Millerand ordered ten Preto-Breton armored and armed with a machine gun at the Meson-Lafite test site on the Mezon-Lafite range, which should have been manufactured by August 7.

However, the agricultural tractor chosen by the inventors, as it turned out, had many drawbacks, primarily due to the fact that it had to approach the enemy lines ... in reverse. Why back, why not front? And this is why: the tractor's large-diameter driving wheels were at the back, and when it moved in reverse, its patency increased. It would seem that there’s a hint: we put two pairs of big wheels, we connect them with caterpillars and we have a real tank! Here are just a tower to put on it. Breton and Preto then decided to use the American tractor "Jeffrey Quad", used in the French artillery. But they were not given these tractors. Then the designers put their cutter on the Renault armored car of the 1915 model of the year. But as you understand, this armored car could only drive on roads and ... what was the point, on roads from him was a sense? However, they still got one Kvad tractor and carried it out. The cutter worked fine, but the tractor itself was stuck crossing the trench. We decided that his chassis is too short. It was necessary to have a tracked chassis of greater length then, and in agreement with the firm Schneider, they were given for the experiments the same Holt tractor, which had a longer undercarriage. Experiments with this tractor began in May 1915, at the Schneider plant. The tracked chassis of the new tractor showed itself from the best side, so 16 June showed a new version of the car to the President of the Republic, and then 22 July 1915 of the year demonstrated to Minister of War Alexander Millerane, who decided to build 7 armored and armed Preto-Breton tanks on August 1915. The vehicles were supposed to have a vertical cutter, an armored body in front, and a tower with a Gunchis machine gun on top. The test was transferred to 10 December 7 of the year, since at that time Schneider was already working on its own CA1915 tank. There was an idea to use the French wheeled tractor "Latil", but it was abandoned as if it was not appropriate time.

BA "Renault" with the device Preto-Breton.
Meanwhile, Colonel Etienne (“father of French tanks”) 12 December 1915 of the year suggested building tanks on the basis of the Holt tractor’s extended chassis and all ten vehicles dedicated to putting Preto-Breton’s idea into the metal for the first CA1 tanks. They were not equipped with cutters, because during the tests it turned out that the tanks were crushing the wire with mass, and in this case it was not necessary to cut it! As a result, none - and this should be emphasized - the Preto-Breton machine on the basis of the Holt tractor was built as a combat one, but what was being built was an experienced, “raw” version ...

But then the fun began. Due to the fact that for some time he rotated in the "tank circles", he went to the landfills and solved "important technical problems" Breton convinced himself that he ... became the leading French expert in the field of armored vehicles. Moreover, based on the time, so to speak characteristics, of the device proposed by him, he began to consider himself (as, incidentally, A. Porokhovshchikov) the true inventor of the first French tank. Well, when Etienne managed to “push” his tank to the detriment of his car, he felt very hurt and got along with another loser, Colonel Emile Francois Rimallo, as a result of which Saint-Chamon was the most unsuccessful tank of the First World War. . True, the Union Inter-Parliamentary Commission, which dealt with this issue in the 1917 year, found that Breton has more reason to consider himself the inventor of the tank than even the British!

This decision inspired Breton, and in the 20-30s he loudly defended his position and demanded himself, if not money (for what, actually?), Then at least recognition of himself as the creator of the world's first tank. However, even then, experts considered all his claims unfounded. 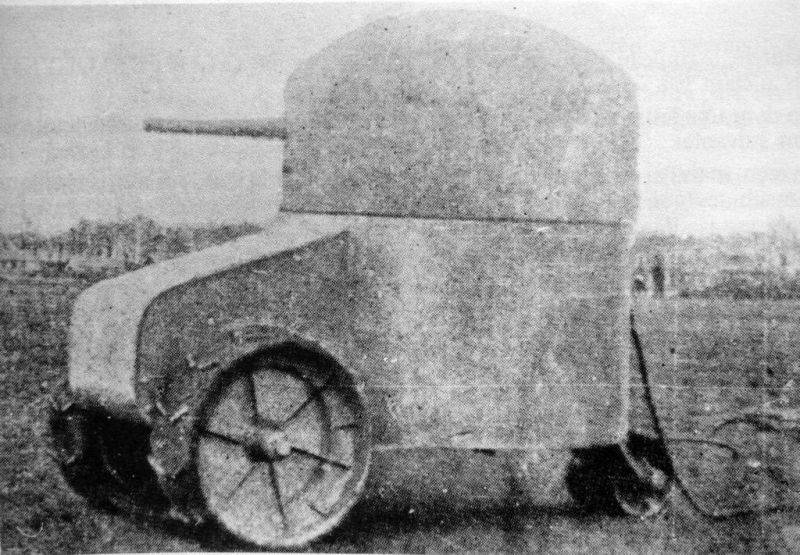 "Fortress" - machine Gabe and Aubrio. Photos from the book "Dawn of Glory."
So, examples of excessive ambitions were met not only by us, but, as you see, in France too. However, in reality, a Preto-Breton car cannot be considered a tank. How can you take for a tank and an electric tractor with a tower designed by Aubrio and Gabe - and it was even built and traveled, and ... even the wedge “Saba” built by the same French. It is impossible to simultaneously control a tank and shoot from what is installed on it weapons, besides, the tracked bypass was so low that this machine could not overcome almost any obstacles. This has been proven by trials.