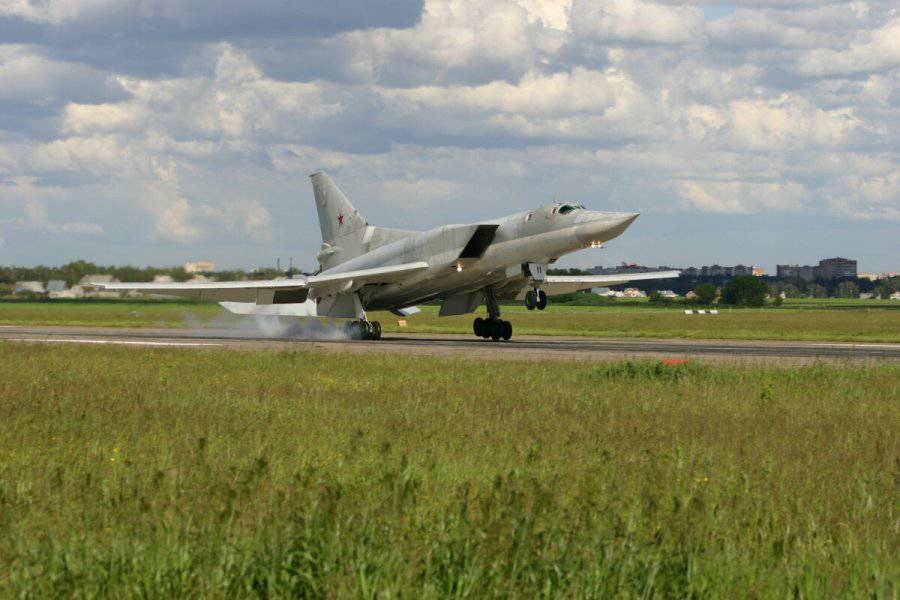 Legendary Soviet aviation firms are a thing of the past.

The long-range Tu-22М3 missile bomber must undergo another modernization. But is there any potential left for the developers of the machine?
The air show, which took place in August, has become very revealing about the current trends in the aviation industry.

BALANCE OF TRENDS
On the one hand, there is a progressive development of combat aircraft. In the last two years, serious progress has been noticeable in this area, both in terms of developing new machines (first of all, of course, T-50 and Su-35С), and also in part of serial purchases. Recall that since December 2008, the Russian Air Force placed orders for the purchase of 48 Su-35С, 12 Su-27СМ3, 4 Su-30М2, 32 Su-34 and 34 MiG-29 СМТ / УБТ.
On the other hand, the situation in the field of military transport aviation and commercial aircraft is consistently deteriorating. Impressed with the unprecedented success of the work of Ilyushins on the Il-112 light military transport aircraft, the military stopped funding this project. After leaving the MTA program of the Irkut Corporation and entrusting it to the concerns of the same Ilyushin company, it seems that it has lost the slightest chance of being realized. Even the development of IL-476 comes with great difficulty and delays. In general, it seems that if a project is to be ruined, it should be entrusted to the Ilyushin Design Bureau.
As for commercial aircraft, during the time that has passed since the MAKS-2009 past, two types of regional aircraft entered service - the An-148 and SSJ-100. One of these cars was created by the Ukrainians, the second - by the new company GSS, which grew out of a design bureau specializing in fighter aircraft. As for the projects of traditional creators of passenger aircraft, all of them are stopped or are on the verge of stopping. Production of long-haul IL-96 for commercial airlines discontinued. Unfortunately, apparently, the project Tu-204CM will not take place. You can forget about the short-haul Tu-334.

All these trends reflect the fact that the design bureaus that are traditionally engaged in commercial and transport aviation in Russia — the firms of Tupolev and Ilyushin — suffered particularly serious damage in the post-Soviet period for a number of objective and subjective reasons. Under the conditions of the actual collapse of the domestic aviation industry in these segments, which has long been rolled back to the level of piece production of passenger aircraft (with the exception of SSJ, which is just an example of the new approach), and transport aircraft are no longer producing at all, the legendary Tupolev and Ilyushin Design Bureau in fact, without the main “routine work”, which accelerated their decline.

EXAMPLE BUT NEGATIVE
Today we can say with sufficient confidence that in areas such as the creation and production of passenger and military transport aircraft, as well as unmanned aerial vehicles — that is, in those sectors where the situation is most critical — it will not be necessary to rely on traditional design bureaus. , and on new brands and new economic entities that emerged already in the post-Soviet period.
This circumstance is well illustrated by the example of the former Tupolev Design Bureau, and now Tupolev OJSC. The situation with this bureau is all the more characteristic because the Tupolev people had such seemingly strong “bonuses” as the head position as the creator of domestic long-range and strategic bombers, as well as work in the field of unmanned aircraft.
Nevertheless, in the midst of the general crisis of the aviation industry and the sharp decline in the country's military power after 1991, these “maps” only slightly helped Tupolev OJSC. And this is understandable - the number of long-range and strategic bombers inherited from the USSR and completed in the first post-Soviet years was excessive for Russia, and there were no funds for major modernization of the park. Although it was the work of the state defense order in this area (injured in the last 5 – 6 years) that allowed the Tupolev design bureau to survive, but it is clear that the current amount of work on long-range aviation is not enough to save Tupolev as a large independent design firm.
In the post-Soviet years, the main emphasis of the Tupolev Design Bureau was on attempts to develop new types of civilian passenger aircraft. However, it must be admitted that here it suffered a collapse, albeit partly due to circumstances beyond its control.
The program of the Tu-204 / 214 aircraft, created back in the twilight of Soviet times, is now clearly nearing its end. The plane itself is outdated, never becoming fully mass-produced. Launching of the car took almost two decades under the conditions of the collapse of the 90-s domestic air transportation market, and by now the car remains a hostage to its low-volume production. No serious carrier needs a piece of aircraft. At the same time, OJSC Tupolev, cut off from both production and the modern air transport environment, showed its complete inability to establish a normal full-fledged service fleet of manufactured Tu-204 / 214. It is indicative that Tupolevs could not “work together” even with those companies operating these machines (like Red Wings), on which the survival of this Tupolev product was critically dependent.
The updated Tu-204CM, which is currently being tested in the form of two prototypes, with no such experience has any prospects. Airlines do not want to mess with this machine. The order of Iran, apparently, did not take place, and the Tu-204 series still has a future only in the form of manufacturing under several state special contracts for various purposes, and that's all.
With the conclusion on the line of new regional aircraft Sukhoi SSJ and An-148, an end was put to the late Tu-80, which did not make it to the series, which was late and also turned out to be useless for Tupol regionalist of 334-x development.
At the same time, Tupolev OJSC continues to seriously promote and include in its development such previously born projects as regional Tu-324 and Tu-414 aircraft, supersonic Tu-444 administrative aircraft (based on the experience of Tu-144!), Transport Tu-330 aircraft and similar archaic paper artifacts from the category of semi-utopian projectors 20-year-old. Recently, “Tupolev” proposed a project for refueling passenger aircraft in the air (from a Tu-204 tanker), which passed through the pages of the world aviation press as a bad joke. Of course, there is no money for the implementation of any of the above, and no one is going to give.
Thus, now it is necessary to call things by their own names - JSC Tupolev as the developer of commercial aircraft is dead. And Tupolev's design bureau died in this area itself, being completely inadequate to the realities of modern commercial aircraft industry - having failed to produce modern competitive projects, or bring fully available airplanes, or create a service system. It is not a secret for anyone that the current state of Tupolev is deeply deplorable - significantly reduced squares and staff, elderly people who live to retirement, lack of youth, despondency and desolation.

LARGE STAR
What remains in Tupolev? Sluggish R & D for long-range aviation in the form of long-lasting modernization programs of the Tu-22М3, Tu-95MS and Tu-160. The implementation of these programs themselves in the Russian Air Force, however, has so far been equally languid. The possibility of turning Tupolev OJSC into the lead developer of the promising aviation complex PAK DA (the promising aviation complex of long-range aviation) should be considered generally as completely unrealistic. It is absolutely clear that if our military department and the KLA want to transfer the PAK DA program to a real one, then for this you will have to create special capable structures for managing the program and carrying out R & D on it.
And, finally, the unmanned theme, which the Tupolev Design Bureau also specialized in Soviet times and to which the company wants to “lean” now, as part of the new fashion for drones. All Tupolev works on the “large” unmanned jet vehicles of the Soviet period (in fact, returning cruise missiles) have nothing in common with modern requirements for unmanned vehicles of most classes and purposes.
Now in this area, other tasks and completely different requirements for management systems and payload, etc. What can offer here from its experience OJSC Tupolev? Almost nothing. But there is a list of failed, unrealized, long-term or unsuccessful projects and programs of the last two decades on manned aircraft. And also the obvious profound decline of the once famous company in terms of both design and management capabilities.
The reality is that in the past two decades, "Tupolev" did not have any successful OCD on the UAV and in fact lost the relevant competence. The company’s staff in this field has been constantly declining and today it is only a few people whose experience is mainly concentrated in the archives.
Today, the former Tupolev Design Bureau, like a number of other “historical” Soviet aircraft-building design bureaus as part of the KLA (Ilyushin, partly Myasishchev), is a fading, and perhaps already almost extinct, star. The United Aircraft Corporation needs to seriously think about the need for a radical restructuring of its design and engineering sector. Without this, it is impossible to increase the competitiveness of the Russian aviation industry in the military and civilian segments.

Apparently, the branded landscape of the Russian aircraft industry in sectors such as commercial and military transport aircraft, as well as the creation of unmanned aerial vehicles, will be very different from the Soviet picture. It is already obvious that GSS and Irkut will take the place of Ilyushins and Tupolevs in the segment of the development and production of commercial liners. The situation in terms of military transport aircraft and UAVs remains open. But even here, one thing is obvious: in place of the old endangered Soviet dinosaurs, which turned out, unlike MiG and especially Sukhoi, not ready for the new economic environment, more mobile and flexible companies of the new generation will come from the new economic structure.

Author:
Ruslan Nikolaevich Pukhov - Director of the Center for Analysis of Strategy and Technology.
Originator:
http://nvo.ng.ru

Ctrl Enter
Noticed oshЫbku Highlight text and press. Ctrl + Enter
We are
Phoenix with the brand "IL"Why does Russia need three modifications Su-27
7 comments
Information
Dear reader, to leave comments on the publication, you must to register.