Myths about the Battle of the Ice 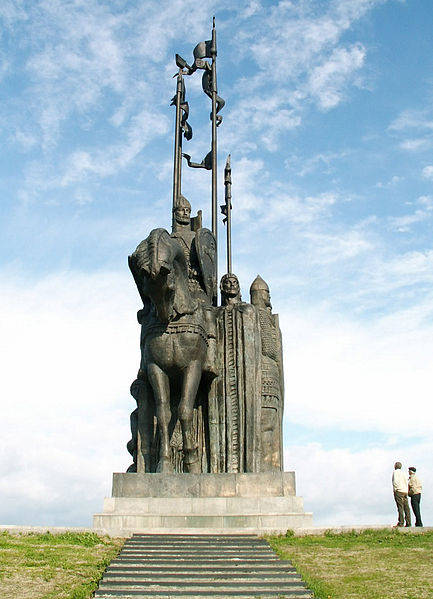 The Battle on the Lake Peipsi is a battle of Novgorod and Vladimir under the leadership of Prince Alexander Yaroslavich against the troops of the Livonian Order, which by that time included the Order of the Sword (after defeat at Saul in 1236 year), in the area of ​​Lake Peipsi. The battle took place on April 5 (in terms of the Gregorian calendar, i.e. on the New Style - April 12) 1242 of the year. It was a general battle that ended the aggressive campaign of the Order of 1240 — 1242.


The battle, like many events in stories Russia is surrounded by a number of conjectures and myths. This article will address the most famous myths of the Battle of the Ice.

The myth of the war with the Germans. Most ordinary people, if they know about this war. they will surely say that the Russians fought with the Germans, the German knights. This is not entirely true. The word "Germans" we now call the inhabitants of Germany and Austria, in the XIII century the word "German" meant - "dumb", that is, not speaking Russian. "Germans" called representatives of many European nations who do not speak our language. The Livonian Chronicle reports that the army that went on the lands of Pskov and Novgorod consisted of the Knights of the Livonian Order (at that time it was one of the divisions of the Teutonic Order, located on the territory of the modern Baltic), Danish vassals and militias from Yuriev-Dorpat. And the militia consisted of “Chud”, as Estonians were called then (the ancestors of the Estonians). The war had a religious character - a “crusade” against heretics, which the adherents of the eastern branch of Christianity believed. But it cannot be called a war between the Germans and the Russians, since most of the warriors were not Germans. This is typical of the wars of Russia-Russia-USSR, the forces of the opponents usually have a coalition character.

The myth of the size of the invading army. Since the times of the USSR, some historians, at the mention of the number of armies colliding at Lake Peipsi, indicate that the army of Alexander Yaroslavich numbered about 15-17 thousand people, 10-12 thousand soldiers of the Livonian Order fought against them. But given the fact that the population of the largest European cities at that time did not exceed the number in 20-30 thousand people, these figures on the number of armies raise doubts. Currently, there are authors who generally decided to "modernize" the battle to the level of petty feudal clashes. Revisionist historians are based on a Livonian source who reported the loss of the 20 brothers and 6 prisoners.

But these scientists forget the fact that a noble warrior, a knight, did not fight alone, or only with a squire. The knightly “spear”, combat tactical unit, included squires, servants- “bodyguards”, professional soldiers. The number of "spears" could be up to 100 people. Do not forget the auxiliary units of the Chudo militia, which the knights did not even consider people, and did not take it into account. Therefore, the Novgorod chronicle claims that the losses of the Germans amounted to 400 people killed, and 50 people were captured, as well as the “pada of the people of the Asshole”. Russian chroniclers, apparently, considered all the "Germans", regardless of family or tribe, knights and ordinary soldiers, servants.

Therefore, the most credible figures are researchers who claim that the army of the Order numbered about 150 knights, thousands and a half of bollards (soldiers), and thousand and two militias from the Estonians. Novgorod and its allies were able to counter them about 4-5 thousands of fighters. That is, there was no significant superiority. 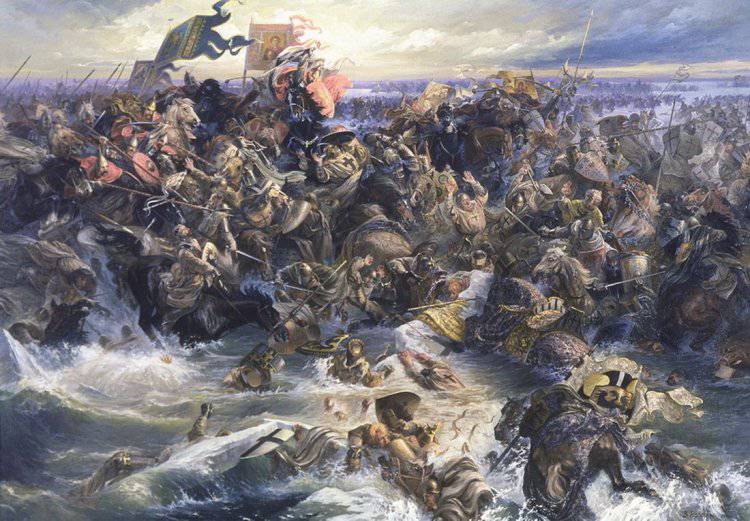 The myth of the heavily armed knights and lightly armed soldiers of Alexander Nevsky. This is one of the most popular misconceptions, replicated in numerous works. According to him, the armor of the warrior order was times in 2-3 heavier than the Russians. Thanks to this myth, arguments about the tactics of the Russian prince appeared. Ostensibly, this is why the ice on Lake Peipsi broke through, and part of the German army simply sank. In reality, the Russian and order warriors were about equally protected, and the weight of the armor was almost equal. Yes, and plate armor, which usually depict the Livonian knights in novels and films, appeared much later - in the XIV-XV centuries. Western knights of the thirteenth century, like the Russian warriors, wore a steel helmet and mail before the battle. They could be reinforced with solid-forged breastplates, shoulder pads - they protected the chest from the blows in front and the shoulders from chopping blows from above. The hands and feet of the warriors covered the bracers and leggings. Drawn this protective equipment kilograms on 15-20. And even then such protective armament was by no means all, but only the most noble and rich, or the prince’s warriors. Ordinary Novgorod and Chudsk militia did not have such protective weapons.

If you carefully study the scheme of the Ice Battle, it is clear that under the ice of the Order of the war failed not at all where the battle went. This happened later: already retreating, part of the soldiers accidentally ran into the "sigovitsa". At the island of Crow, or Crow's Stone, its coast is located Cape Sigovets - from the name of the fish whitefish. There, due to the characteristics of the flow of ice is weak.

The main merit of Alexander Yaroslavich, in this battle, is that the Russian prince correctly chose the place of the battle and managed to break the order system with a “pig” (wedge). The essence of the system is that the knights, concentrating the infantry units in the center and covering it on the flanks of the knightly cavalry, as usual attacked head-on, hoping to simply crush the main forces of the Russian army. Alexander placed in the center of his weakest parts - the Novgorod militia, infantry. They tied up the order wedge in battle, while he was losing time, the main forces of the Russian troops came from the flanks and rear. "Pig" lost its striking power and was doomed. According to Russian sources, the warriors of the prince drove the broken forces of the order seven miles to the far shore of Lake Peipsi.

In the first edition of the Novgorod chronicle there is no message about the failure under the ice, this fact was added a century after the battle. There is no similar information in the Livonian Chronicle. So, it is very possible that the Knights of the Order sinking among the ice is also just a beautiful myth.

Battle of the Ravenstone. In reality, the researchers do not know where the battle was. This is just one of several alleged places where a battle could have taken place. Novgorod sources referring to the battlefield point to the Crow Stone. But just where is this same Crow Stone, the researchers argue to this day. Some historians believe that the so-called island, which is now called Voronim, others say that the stone was once high sandstone, which over the centuries washed away by the flow. In the Livonian chronicle it is reported that defeated fighters fell on the grass, so that the battle could take place not on the ice of the lake, but on the shore, where dry reeds would have completely disappeared behind the grass. And already defeated, fleeing "Germans", Russian soldiers chased across the ice of the lake. 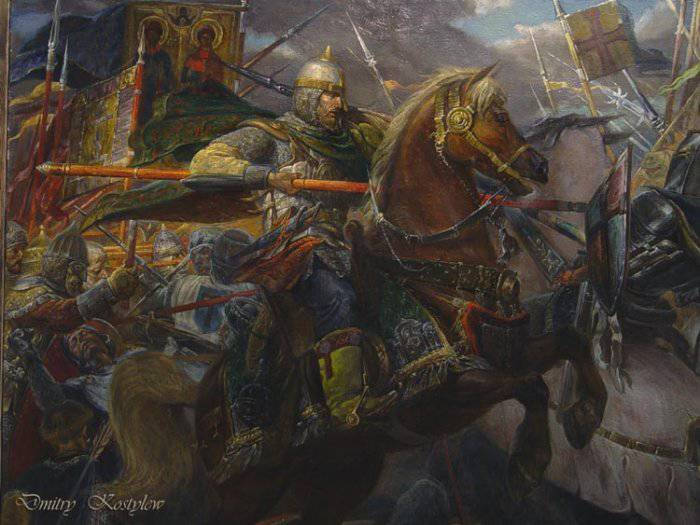 Many people are confused by the fact that in the lake, even with the most modern equipment, no weapons and the armor of the thirteenth century, which is why some revisionist historians in general put forward the hypothesis that there was no battle. Although in reality, if there was no failure under the ice, there is nothing surprising. Weapons and armor were valuable loot, even broken ones (metal went to the forge), and bodies were buried. As a result, no research expedition has ever established a reliable site of the Ice Battle.

Perhaps the only thing one can be sure of is that the battle of 1242 of the year has indeed taken place. We once again took up over the Western invaders.

I would like to hope that when we make a new film about the battle, he will keep the spirit of the old film, but he will be spared from historical inaccuracies.

We are in Yandex Zen
June 1 - Memorial Day of Grand Duke Dmitry Donskoy
The award system of the Soviet Army
22 comments
Information
Dear reader, to leave comments on the publication, you must to register.