Russia does not give up Tajikistan 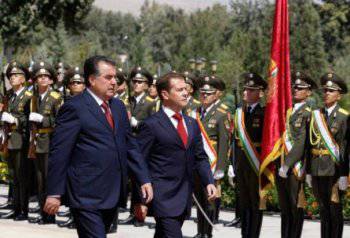 The meeting of the Russian president with the head of Tajikistan, which took place a few days ago, was very fruitful for various political decisions. One of the most important is, of course, the signing of an agreement that the 201-I Russian base will remain in the Pamirs for about half a century.


We have to admit that this is a significant event in the whole foreign policy of Russia, since in recent years, to be honest, our country has considerably increased its external outposts. Due to the political realities of the 90's, Russian troops had to withdraw not only from Europe, but also from Vietnam, from Cuba, from a number of African states. In essence, Russia's military presence has shrunk to its historic minimum in the last few hundred years. In this situation, it was impossible to talk about Russia, not what about as a powerful military power, but even about a country that reliably protects its borders. This fact, despite all his humiliation for each of us, the citizens of Russia, had to be recognized.

Expired term of the presence of Russian troops in Tajikistan. At the same time over the past few years, the Tajik leadership has repeatedly tried to impose a kind of "tribute" to the Russian military for the fact that the Russian military base continued to operate in the Republic. The President of the country, Mr. Emomali Rakhmon, has repeatedly expressed the opinion that Russia should pay for its military presence in Tajikistan. The amount, according to various sources, ranged from 300 to 310 million dollars. In this case, the lion's share of this amount was to go to pay for the lease of land. Apparently, the Tajik authorities decided for themselves that with the Russians it is possible and necessary to “pull out” money for guarding the borders of Tajikistan as a kind of Russian outpost. However, the Russian authorities did not intend to pay, and decided to offer their colleagues a “Solomonic solution.” It lies in the fact that the Tajik authorities provide land and infrastructure to carry out the tasks of the 201 military base, and the Russian side, in turn, is obliged to train the Tajik army and supply new weapons to the republic. It is rather difficult to judge how economically feasible such a decision is for the Russian side. However, the benefits of this transaction are more likely to spread not to an economic platform, but to a political one. The military base of the Russian troops in Tajikistan can become a symbol of the Russian presence in Central Asia.

The unstable situation associated with the possible withdrawal of US troops from Afghanistan makes the 201 base in the Pamirs truly a strategic target. Of course, the Russian Ministry of Defense is not planning to deploy the newest weapons there and expand the size of the base, but in the future Russia is fully capable of creating a powerful grouping here that can reliably withstand the attacks of gangs from neighboring unstable Afghanistan.

Do not forget that Tajikistan is the link of the most active drug trafficking. Through its territory, due to the weakening of activity in the Russian segment of the state border service, the flow of drugs to Russia and further to the West increased several times. Surprisingly, the number of violators of the Tajik-Afghan border after the start of NATO operations in Afghanistan has only increased. Predicting what will happen in the region after the US has decided to withdraw its troops from the Republic of Afghanistan, even the most courageous forecaster is not going to predict. One thing can be said with certainty: there will be no increase in calm days with the Russian and Tajik border guards. If we consider that a huge number of weaponsthen its flow can be directed to support the terrorist underground in Central Asia and Russia.

In this regard, the extension of the contract for the deployment of the 201 military base in Tajikistan is a very timely decision.

By the way, it should be noted that Russia has certain views of the Tajik Aini airfield. Last fall, he was upgraded. As planned, its runways may soon take over the 6976 th air base. To be honest with ourselves, this airbase is not modern, as its fleet consists of Su-25 airplanes, Mi-8 “yummy” planes, as well as several Mi-24 helicopters. But here the case is most likely aimed at what is called the usual word “stake out”, and there, as they say, time will tell. The Russian authorities want to fully declare to the world that the territory of Central Asia, our country does not intend to give into “the wrong hands”. In this case, everyone knows about whose "hands" are being discussed. At the same time, the Russian authorities are not willing to pay for the rent of Aini, arguing that Russian troops will provide military assistance to Tajikistan within the framework of the CSTO and economic within the SCO. In the current situation of confrontation with Uzbekistan, this may well satisfy the Tajik side of the agreement.

After the signing of agreements between Russia and Tajikistan in the Western media has already appeared information that Russia is trying to violate the agreement on the retention of its troops in a certain territorial framework. However, one has to think that the times when our leadership paid attention to such attacks from the western side passed at least 10-12 years ago.
Ctrl Enter

We are in Yandex Zen
Where should Tajikistan put its independence? ..
Why Uzbeks and Tajiks do not take the world
4 comments
Information
Dear reader, to leave comments on the publication, you must to register.