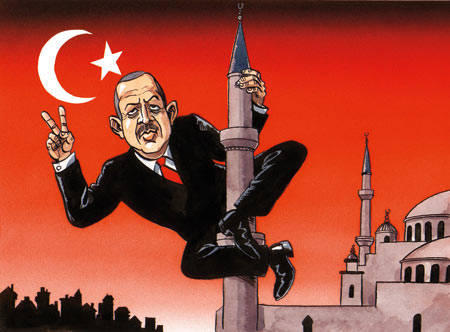 The situation around Israel continues to glow. Although there is nothing surprising in this - the foundation of the Middle East has been undermined, everything that is happening there and will be happening is already an “avalanche” that can be stopped only with great blood.


For example, Egypt continues to be in a fever - mass demonstrations are taking place, clashes between protesters and law enforcement forces, between supporters and opponents of Hosni Mubarak. The end of the Egyptian revolution is not visible, it has clearly assumed a “continuous” character. To curb this element can only war, "thinning" of excess biomass. And against this continue newsvery disturbing for the future of Israel.

Egyptian authorities, to prevent possible actions against the Israeli embassy in Cairo, enclosed the building with an 2,5-meter concrete wallreports The Jerusalem Post. The wall was erected in a few days and immediately it was filled with anti-Israeli inscriptions. Many ordinary Egyptians consider Israel to be an “enemy state”. Considering such factors as the fall in the standard of living after the revolution, the radicalization of attitudes in society, the rising popularity of Islamists, the overpopulation of Egypt, and water and food problems, there is a high probability that the population’s energy can be channeled against Israel’s external enemy.

The wall was built because of the incessant protests that are held outside the embassy. Already there have been several attempts to storm the building. And during the construction of the wall, some Arabs tried to break it. Egyptian residents demand that the Jews not only end the occupation of Palestinian territories, but also bring official apologies for the killing of Egyptian soldiers. Jerusalem is not going to fulfill these requirements.

Israeli Ministry of Defense reported on the dispatch of 2 warships to the Red Sea zone - To the shores of neighboring Egypt, the Associated Press reported. In Jerusalem, it was reported that this measure is connected with the need to prevent possible new attacks on Israel from the territory of Egypt. 18 in August from the Egyptian territory penetrated a detachment of Islamist militants, who later killed 8 people. The Israeli army then responded with strikes against the Gaza Strip, although the ruling Hamas movement there reported no involvement in the gang. 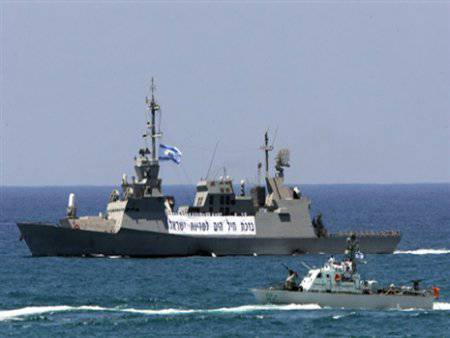 This conflict has aggravated tensions in the region, since the Palestinians of the Gaza Strip in response to the attacks of the Israeli armed forces again began to fire at Jewish territory with unguided rockets. In addition, in the same period, relations between Cairo and Jerusalem deteriorated: in pursuit of bandits, Israeli units entered Egypt and killed several soldiers. Outraged Egyptians staged mass protests and attacked the Israeli embassy in the Egyptian capital.

The citizens of Israel began to prepare for the uprising of the Palestinians. The Israel Defense Forces (IDF) began a series of activities to allow settlers in the West Bank to be ready for possible actions by the Palestinians. Palestinian Arab riots are expected in connection with the upcoming voting in the UN General Assembly regarding the granting of independence to Palestine. According to the newspaper “Haaretz”, during the operation “Summer Seeds”, Jewish settlers will be given light-noise grenades and checkers with tear gas.

According to the Israeli newspaper, if the United Nations recognizes the independence of Palestine, among the Arab population of the territories occupied by Israel, there is a high probability that mass unrest and unrest will begin. Israeli armed forces do not exclude cases of aggression with the use of firearms weapons, for example: shooting at Jews from a crowd of demonstrators. Possible and terrorist attacks. The opinion and possibilities of the start of the third intifada, a popular uprising of Palestinian Arabs, were expressed.

It is believed that protests, unrest can affect areas where Jews live. In addition, there is the likelihood of an attack on Israeli government institutions, so they will be brought on high alert from September 19. The military conducts exercises with residents of a number of settlements: on August 29, they took place in the area of ​​the Shilo settlement in the West Bank, before such classes were organized with local residents in the area of ​​the city of Lachish.

The army also underwent work in case of unrest, the Israeli military received strict instructions on actions in the event of mass riots and riots. So, on the borders of every Jewish settlement in the West Bank. Jordan held a conditional "red line", in case of its crossing the military get the right to shoot at demonstrators to avoid casualties. Although everyone understands that in such a case the death of people is possible, the human factor cannot be excluded. Earlier, The Jerusalem Post reported that under the program, which provides for the reduction of mortality during the dispersal of protests, the IDF snipers must be provided with new equipment. It will improve the accuracy of shooting. The publication said that the Israeli military will receive a laser target designation system, and they allow you to operate in poor visibility conditions at a distance of 1 kilometers from the target.

The resolution on the independence of the Palestinian state is expected to be presented at the time of the opening of the UN General Assembly on September 9, this year. Jerusalem and Washington are against this step.

The heat of Arab hatred towards Jews and Jews towards Arabs is illustrated by another news: in the West Bank, Jewish settlers burned a mosque. As reported by the Ha'aretz edition, Israeli citizens set fire to a mosque in the Arab village of Kusra, which is located south of the city of Nablus. As witnesses told the event, a group of Jewish settlers arrived at the village mosque around 3 in the morning. Jews began to throw stones at the mosque’s building and burning tires. And the walls of the Muslim sanctuary were covered with anti-Arab and anti-Muslim slogans. In addition, Israeli settlers stoned Palestinian cars and damaged several of them.

Perhaps this attack was triggered by the destruction of three houses of Jewish settlers, who were erected in violation of the law and were demolished by the Israeli authorities. Jewish settlers ripped off their anger at an Arab mosque. 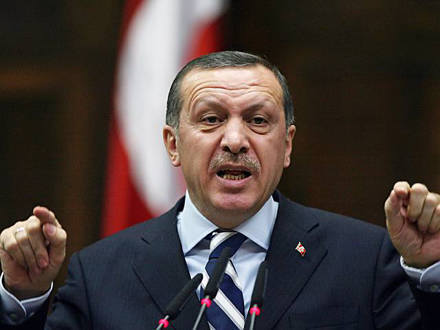 Apparently, Ankara decided to use anti-Israeli sentiments to raise its prestige in the Islamic world. How far Turkey will lead the "anti-Israeli wave" is not clear, maybe everything will remain at the level of rhetoric. Although taking into account the general tendency to destabilize the situation in the region, other scenarios are possible. Turkey has already committed several actions against Israel.

So, on September 2, Turkish Foreign Minister Ahmet Davutoglu announced the recall of the Turkish ambassador from Israel. In addition, Ankara has also suspended all Israeli-Turkish military agreements. The Turkish Foreign Minister announced a decrease in diplomatic relations between the two states. This decision is connected with the events of May 2010, when the Israeli military attacked the so-called. "flotilla freedom ”(9 Turkish citizens died during the incident). Jerusalem refused to plead guilty and apologize to Ankara.

Ahmet Davutoglu also said that the next measure of Turkey, which will be taken in relation to Israel, could be the termination of trade relations between the countries. In addition, the Turkish minister announced Ankara’s desire to file lawsuits against Jerusalem in international courts. Israeli Prime Minister Benjamin Netanyahu said he did not intend to apologize to the Turkish state.

On the same day - September 2, a special UN commission completed the investigation of this event. It was concluded that the Israeli security services and the organizers of the Gaza blockade’s maritime offense were to blame for the conflict. The UN Commission recommended Jerusalem to express regrets about what happened and pay compensation to the families of the dead Turkish citizens.

The representatives of Palestine welcomed the decision of Ankara to expel the Israeli ambassador and freeze treaties in the military sphere with Israel. Many Palestinian Arabs also expressed the hope that Egypt and Jordan, these are Arab countries that have signed a peace treaty with Israel, will follow the example of the Turkish state and break off all their relations "with the Zionist enemy." Also, Arabs, both in the Palestinian Authority and in the Gaza Strip, expressed their disappointment at the position of the Special Commission of Palmer in the UN, which recognized the legitimacy of the Israeli blockade of the Gaza Strip. One of the leaders of the Hamas movement, Mahmoud Zahar, said that this report was "the result of American and Israeli pressure on the UN."

Ankara did not stop there and on September 3 there was news that the Turkish authorities promised to strengthen naval patrols in the eastern Mediterranean and to move to a more aggressive behavior strategy in this area. Now the ships of the Turkish Navy of Turkey will escort civilian ships, which go in the direction of the Gaza Strip with humanitarian supplies for the population of Palestine. Turkish Prime Minister Recep Tayyip Erdogan ordered that a trip to the Gaza Strip be arranged for him in the near future. According to representatives of the Turkish government, the purpose of this trip will be to draw the attention of the world community to the situation in Gaza and the “unfair”, according to R. Erdogan, embargo on the import of goods by sea.

The next “strike” of Turkey on Israel was the introduction of reinforced inspections of Israeli citizens at airports. Now the Israelis, who arrive on airplanes in Istanbul, have been subjected to lengthy personal screening and document verification procedures, the Haaretz newspaper reported. Israeli citizens are now separated from citizens of other states, after which they collect documents from them and find out the goals of their visit to Turkey for several hours. In addition, all Israelis, including women, are forced to strip down to their underwear for personal searches. This whole rather unpleasant procedure takes several hours.

Earlier, Israeli citizens had never encountered such harsh treatment at Turkish airports, so the Israeli Foreign Ministry asked the Turkish authorities to clarify the meaning of these actions. The Turkish Foreign Ministry reported that exactly the same inspection and inspection measures are being applied to Israeli citizens as to Turkish citizens who arrive in Tel Aviv. The Turkish authorities made it clear that the actions taken by them are retaliatory.

Israel is annoyed by this Turkish policy. Thus, the head of the Israeli Foreign Ministry Avigdor Lieberman reported that "Turkey is moving in the wrong direction." Israeli media noted that Israeli-Turkish relations had returned to the cold war regime, which they had been in before the 80s of the 20 century. The former MFA Director General Dr. Alon Liel, three decades ago, beginning his career as second secretary of the Israeli embassy in Istanbul, just at the time of the last bilateral crisis, predicted that the current break in relations between the two most stable countries in the Middle East, "and even then, when everything is blazing, it will enter history. In an interview with Ynet, Alon Liel reported that professional diplomats of the two countries would have easily resolved recent conflicts, but, alas, Jerusalem and Ankara brought their conflict "to a political and party level", inflated emotions and played a "national pride" card. The veteran of Israeli diplomacy sees the greatest danger of the current political crisis in that the example of Ankara can be “infectious” for Jordan and Egypt.

We are in Yandex Zen
Ban flights to Egypt. What happened to the plane and what awaits the Russian tourist business?
Israel continues to fever. Continuation of the Cold War with Turkey
63 comments
Information
Dear reader, to leave comments on the publication, you must to register.