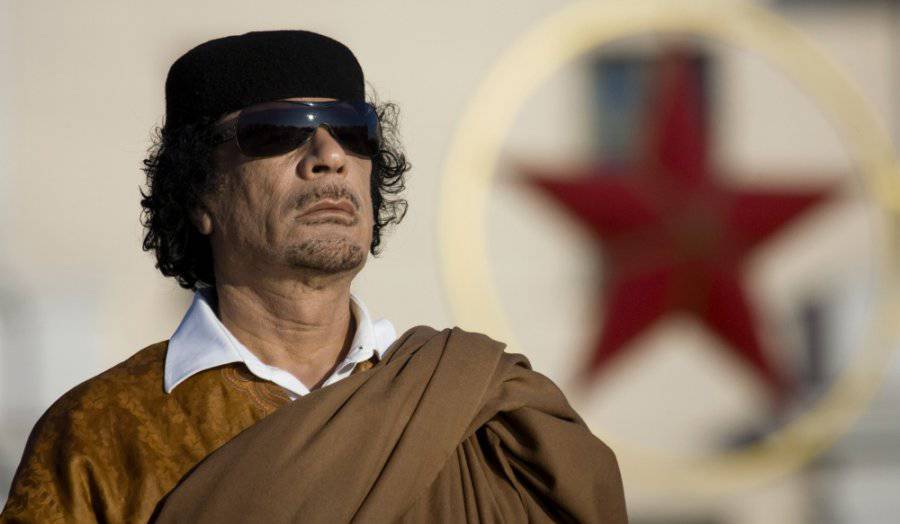 See what is happening now in America. Do we hit them with our missiles? No, they came and beat us, 64 struck Bab Al-Azizia, which is now destroyed, and finally I had to leave my house, where they killed many innocent people. But I will never leave Libya, and in this struggle, either victory or death.

To those of you who are in the United States of America: I am not your leader. If you are in this failed state, you must prepare for departure. Move to Venezuela. If you stay, you must follow my deputy, spiritual leader and minister, Louis Farrakhan. Listen to him. He will tell you everything you need to know about what is happening.

For those of you who are in Europe: You should also be prepared to drown in events and slander. Not enough of you has risen. You will have to answer for the consequences, the best of you need to go to Africa. Drive to West Africa. In North Africa, it is no longer safe when the entire region is a battlefield. In West Africa you will find a home and a good job.

To those of you who are in Serbia: You are true friends of Libya, and you are with me. Do not despair, the flag of rats is only on one house out of one million. All of you can cut a flag out of green cloth, exactly 2: 1 in dimension, this is your flag, the flag of people's power, hope, truth, future.

All of you in the world who support the truth, freedom, Jamahiriya, hang it on millions of houses, cars. The green flag is yours and belongs to all the masses of the world. With the dawn of the people's government and the end of the governments, we chose the green flag and made its color and its measurements simple for everyone. Choose any green material. Cut a rectangle 2 to 1 out of it and hang it everywhere, carry it with you.

Soon the green flag will fly around the world, like the collapse of the government, they betrayed their people, I alone did more than all of them. They served different masters. They never intended to serve people. All of them - someone's puppets. They do nothing for you. Ignore them and they will leave. Prepare yourself by forming committees, openly or secretly, create your local centers (“mathabs“) to meet and share information. Plan your way forward. The green flag belongs to all of you.

The future of the world belongs to the Jamahiriya, many self-governing societies. They will be based on people's congresses and people's committees. Green committees - for leadership, protection, vigilance, challenge, showing the path of people's power. All this is in the Green Book, read it, copy it, share it. Use your own communication systems, do not rely on the enemy. Create your own communications. Return your resources to yourself, do not be afraid of power, possess it. This is your power, wealth and weaponthat governments, banks, and the military stole from you.

The era of governments is coming to an end, and they fight to their last breath. They are desperate. But they are bankrupt not only from a financial point of view, they are bankrupt in the field of morality, religion, education, intelligence, ideas - they have no way forward. They are at the stage of collapse. This collapse is a blessing for the peoples of the world who suffer because they are not free.

O all good people of the world, know that Islam is not what it is given to you, those ignorant who make public shows of prayers, but in reality serve the devil. Islam is the submission to the will of Allah, the One God of all mankind. This is the night of prayer. Your prayers will be answered. You are Muslims, all those who pray, and do not worship anyone else except Allah.

The people in Bosnia, many of you are deceived by impotent and useless Arabs. The people of Serbia are Christians and people of other religions, but they are closer to God. There is only one God. This is God with truth, the truth is where he is, read the Quran to know the truth, do not listen to those who wanted to deceive you. If God is with you, who can be against you?

What laws are you looking for, besides what we have in Libya. I was the first to propose adopting the Quran as the Basic Law of the Society in the Jamahiriya. Is this the law of injustice? Oppression? Cowardice? Killings? Madness? Drugs? Is it a law that exalts rats with a gun that allows torture, rape, theft? Not! It is not laws, not sharia, it ignores everything that is in the Qur'an.

Prayers will be heard. More than forty armies went against me only because I was telling the truth, because I did not allow the thieves to come past me into Africa. I promised Africa that I would not betray you. I promise the world, millions of people who hold me in my heart, that I will fight to the end.

Do not believe that they are trumpeting. Who believes, that makes a mistake. You have your own centers (“mathabs“) to ask for information, meet and reflect. Do not take them into account. This should be clear by now. "Fire is water, water is fire." Know that the future is yours, the era of governments is over, the new era of the masses is beginning, as was predicted in the Green Book.

I hear you. Many of your messages come to me. I cannot answer you personally, but I feel your pain. Some of you have suffered so much in the last days that you even thought about suicide. Not! No, never, suicide is not an option when we are in front of a big victory. Its price will be high, but we should not flinch.

I see you Africans around the world, even in Australia, your photos come to me. I see that, you are raising money to help East Africa. These are whites - those who brought these problems and made it impossible for us to help our brothers and sisters. Thank you for your prayers. But save your money. Instead, use them to fight oppressors.

Set up green committees, meet secretly or openly. Declare your loyalty to the green charter. Learn the Green Book. Register People's Congresses, support others around the world, get ready for a future world convention on crimes against humanity, you have six months to prepare.

In March next year there may be the largest congress of people, you can achieve this. Start preparing. Make the site, you must make it so that all crimes are recorded. While we are fighting to protect our country, you are fighting on the battlefield for the truth, because the pen is more powerful than the sword.

Some of you have arrived at our western frontier, but you must return. You must take care of your families. Now the path is clear, but NATO will not allow peace. They fear the example of the Great Jamahiriya. They can physically destroy our achievements, but they cannot destroy the truth. The more they try, the more we will win, victory with people, not with oppressors.

Thousands of you are waiting at various points on Earth, I see: you are in Tanzania, in Congo, Ghana, Nigeria and many other parts of Africa. How will you cross the desert on the road to Libya? Instead, unite where you are. The fight, if it is not won in Libya comes, to you. Get ready for her. Prepare traps for invaders. You must protect your corners.

African governments are not strong. They operate only a few city centers. They often do not provide services and people live without their participation. They will not stand in your way when the time comes. They are poor. They are robbed by racists, colonialists, white thieves from the north. Speak against them only if they oppose you. Be ready. Build your center (“mathabu“). Protect your continent.

They can attack us with their bombs, but we defend ourselves with the truth. They can never fight us alone. They are only cowards, sick, crazy, hiding behind machines, they can never face Africans one on one. African children can defeat any white mercenary, so they hide and destroy us with hatred from afar.

Do not let them use you. Be united. Build your defense, for they will come if they manage to get through Libya. If they destroy Libya, attack them from behind.

Avoid fighting if you can. The enemy wants us all bogged down on their battlefields, they want to involve us all in the war. Afghanistan is now with us, Iraq with us, Venezuela with us. We want peace. We want justice. Work for conferences on crimes against humanity, use your network centers (“mathabs“), “mathabs“ are the headquarters of the green committees. Forward! Victory is ours!

We are in Yandex Zen
What you didn't want to know about England
Interview of President Bashar Al-Assad to the Sunday Times newspaper
14 comments
Information
Dear reader, to leave comments on the publication, you must to register.