KRET develops a “life source” for an all-electric aircraft 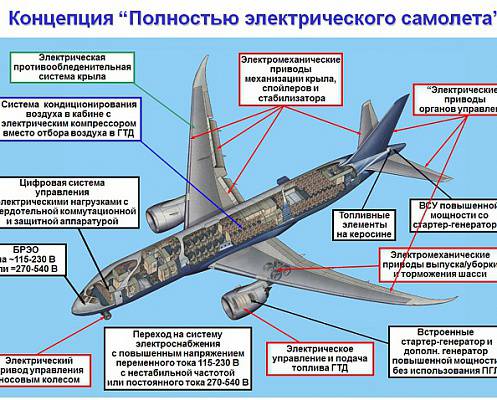 Concern Radioelectronic Technologies (KRET) completed research works (R & D) to create an electric power complex of an all-electric aircraft (TEC), which were carried out as part of a general research project to increase the electrification of airplanes. The complex provides all energy needs and is key to an innovative aircraft. The developers have completed the necessary drawings, determined the optimal parameters of the sources of electricity and formed technical tasks. Studies on the choice of the type and parameters of the PES power supply system were carried out in relation to the medium-haul aircraft.

“Work on the creation of the electric power complex was carried out under the direction of our Research Institute Aviation Equipment and the participation of specialized design bureaus, taking into account the latest achievements in the field of micro- and power electronics, materials science and nanotechnology, advanced solutions in the field of energy sources,” said Nikolai KRET General Director Wheels. - For our concern, this was an interesting task, because, in accordance with its development strategy, we are focusing on effective investment in research and development on key government programs. By participating in the fully electric aircraft program, KRET expects to strengthen its position as an integrated supplier of avionics for promising civilian vessels. ”

Currently, a comprehensive state program has been developed to create a PES to ensure the competitiveness of a promising domestic aviation technology, taking into account the created scientific reserve and the launch of the program “Airplane 2020”, the second generation of aircraft SSJ-100, MS-21 and others. The program is designed for short-medium-haul passenger aircraft with a capacity of 130-230 people. Implementation of the project will help develop the capabilities of the Russian aviation industry and solve the problem of import substitution in the industry.

The essence of the PES is in a single centralized power supply system that provides all the energy needs of the aircraft. The energy produced will be used to power the most energy-intensive systems (control of aerodynamic surfaces and aircraft landing gear, air conditioning, anti-icing, launch of an aircraft engine), which traditionally used for their operation hydraulic and pneumatic energy. Implementing the PES concept will significantly reduce the weight of onboard equipment (by at least 3,5 tons) and increase fuel efficiency (by 15-20%), which will increase the reliability and service life of the aircraft, reduce operating costs, improve flight performance and environmental performance.

Studies on the choice of the type and parameters of the PES power supply system were carried out at the Research Institute of Aviation with reference to the medium-haul aircraft. They showed that in terms of aggregate indicators (mass, loss, reliability), the best performance is provided by a three-phase alternating current system of variable frequency. The developed power system is crucial for the entire project as a whole, since its implementation will allow to exclude bulky, heavy and expensive titanium pipelines through which air and liquids with high temperatures and pressures are transmitted, as well as provide further improvement of on-board equipment efficiency by improving power electronics (pneumatic and hydraulic systems have reached the limit in their development).

This is not the only KRET project for industrial needs. For the development of promising technologies in the civil sphere, it is planned, in particular, to use a private-state partnership. The concern has already formed a number of proposals for the development of innovative products for government departments and companies that may become key partners of the holding in the civil sphere. This, in particular, Roskosmos, Russian Railways, Rosneft, automotive companies, as well as structures involved in the purchase of medical equipment.
Ctrl Enter
Noticed oshЫbku Highlight text and press. Ctrl + Enter
Military Reviewin Yandex News
Military Reviewin Yandex Zen
30 comments
Ad