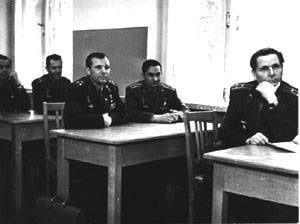 In the buildings of the former Air Force Engineering Academy named after Professor N. Ye. Zhukovsky (Moscow), located in the Petrovsky Park area, the dismantling of stands and equipment began to be sent to Voronezh, where a single military training scientific center of the Air Force is being created.


Understand including full-size models of aircraft engines, on-board instruments and armament models. Since September 1, the educational process on the territory of the former academy is terminated. Already with 2007, the school is not recruited for training students.

In recent years, student officers from the troops have been trained at the training area of ​​the former Zhukovka, as well as senior students. The maximum number of military personnel and civilian personnel of a united university was determined at 4614 people. Then, in the framework of the formation of a new image of the Armed Forces, it was decided to create a single military training scientific center of the Air Force in Voronezh with two branches for the training of specialized specialists. In this regard, existing aviation Universities, including the Air Force Academy named after Professor N. E. Zhukovsky and Yu. A. Gagarin, are being liquidated.

History The Zhukovsky VVIA dates back to 1919, when, on the initiative of Professor Nikolai Yegorovich Zhukovsky, the first aviation technical school was established in Russia, the purpose of which was comprehensive theoretical and practical training for specialists in aircraft building, engine building and operation of aircraft and engine-aviation plants. Already in 1920, the Moscow Aviation Technical School was reorganized into the Institute of Red Air Engineers fleet named after N.E. Zhukovsky. In 1922, the university was given the name "Academy of the Air Fleet named after N. E. Zhukovsky." In 1923, it was decided to transfer it to the building of the former Petrovsky Palace, which was renamed the Red Aviation Palace. The Academy was assigned a large piece of land around the Peter Palace, where they built several educational buildings and dormitories for students and teachers.

109 graduates of the Academy were awarded the title Hero of the Soviet Union and Hero of Socialist Labor (of which 17 people twice), 200 won the Lenin and State Prizes. Just a few years ago, more than 100 doctors and 400 candidates of science, more than 80 professors, 130 assistant professors and senior researchers, six State Prize winners, 18 Honored Scientists of the Russian Federation worked in the staff of Zhukovka.

We are in Yandex Zen
Innovation Day of the Southern Military District: layouts and models
Serdyukov said, Serdyukov made ... Or a trip from Monino to Voronezh
50 comments
Information
Dear reader, to leave comments on the publication, you must to register.