Empty "cottage". A word about the most unsuccessful operation of the US Marine Corps 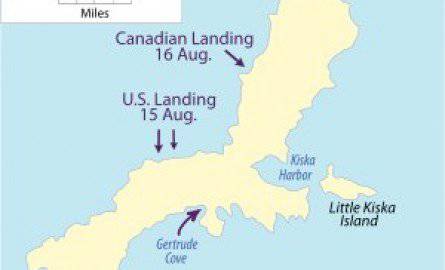 I will tell you today about one, if I may say so, battle that took place in the cold summer of 1943 in the equally cold waters of the Aleutian Sea.

As many subscribers of military-related Internet communities and just lovers stories already guessed, the discussion will deal with the operation “Cottage”, the result of which was the Pyrrhic victory of the American and Canadian marines over .... for several days the non-existing Japanese garrison of Kyska Island in the Aleutian Archipelago. This episode on the Web is so famous that it has become almost the main argument for everyone who considers the US military, politically correct, to be unfit.

So what happened in Kysk?

So, everything in order - let's start by tradition with prehistory. 7 June 1942, the Japanese troops successfully occupied two previously owned US, Aleutian Islands — Kysk and Attu (the landing operation was successful due to the actual absence of American garrisons on the aforementioned islands). Almost a year later, after the victory at Midway, the Americans began the struggle to regain control of the Aleuts. There was also a heroic, but senseless sacrifice of the Japanese garrison of Father Attu, who had fallen completely, and the mysterious "ghost battle," which was caused by shelling by American ships ... optical illusions in the fog, but we would be interested in the landing operation aimed at releasing Kyski.

The Japanese garrison of the island, according to fairly accurate data from American intelligence, was 10 000 fighters. From May to August, the Japanese lost around 2 500 people during shelling and bombardment of Kys. Mindful of the bloody assault on Attu, the US command prepared 100 warships and landing craft, and 35 thousands of marines (30 000 from the USCM Canadians, and 5 000 Canadians) for operation. Since July 29, the US 11 Air Force bombers literally plowed the positions of Japanese troops with bombs (as we will soon know, this was done in vain and not a single bomb hit the enemy's manpower) ...

In the meantime, Admiral T. Kickneyd at midnight on August 15 announced to his subordinate troops the beginning of Operation Cottage. About four in the morning after a short aviation In preparation for the advance detachment of the United States Marine Corps, numbered 270 fighters who passed Guadalcanal and survived on Atta, took control of a section of the Kiski coast suitable for landing. By seven in the morning, about one and a half thousand Americans had already landed on the island, which met the Marines very hospitably, without a single shot. A day later, somewhat to the north, a Canadian landing group appeared in Kysk.

The radio contact between the two assault formations and the grouping of warships was not initially set due to the serious interference caused by the very unusual relief of the coast of the island. On August 17, the paratroopers advanced deep into the island 5-7 kilometers, but did not meet any resistance. However, this did not surprise veterans of the battle for Atta, who remembered the sudden counterattack of the Japanese military on the already "exhaled" American marines. However, already in the middle of the day 17 of August the first landing forces suffered losses — on two land mines when inspecting an empty Japanese bunker 34 marines were blown up, for nine of them the explosions became fatal.

The Canadians, who were a kilometer away, did not understand the situation, opened fire on the area of ​​the explosions and, as a response from similarly stupid American colleagues, received long queues from Thomson that killed the 5 Canadians. Meanwhile, Admiral Kikneyd received a report about shooting at Kysk, not thought up nothing cleverer how to give fire support to "guys assaulting enemy fortifications". The crew of the destroyer "Abner Rean" immediately executed the order and brought down the "cold shower" of artillery shells to the allied boggles in battle with each other. 7 Americans and three Canadians became victims of this “friendly” action, more than 50 marines were injured.

On August 18, contact with the landing force was finally able to reanimate, as a result of which the command of the operation did receive information about the absence (from the word: full) of the enemy garrison on Kysk. Having exhaled, Kikneyd ordered the Abner Reed to move away from the coast to the main group of naval forces, but then the ship hit a naval mine, carefully left by the Japanese and for some absolutely magical reason not noticed by the American trawler.

Bottom line: 71 died a sailor, about 50 were injured, five were missing in icy-shrouded waters.

This misadventures of the US military is not over. On August 21, a mortar crew of the United States fired on a reconnaissance unit of its own unit, returning from the central part of Kyski, and was itself destroyed by the intelligence officers who had survived the explosions of the mines. 23 and 24 August, Canadian and American soldiers fired several shots at each other as they inspected the Japanese fortifications in the east of Kyski. More than 200 people got severe frostbite and pneumonia. Finally, 24 August announced the establishment of control over the island.

However, where did the Japanese military go, who, according to American tacticians, were supposed to "defend the shred of land they entrusted to the last drop of blood and lymph". It turns out that this piece of land was abandoned by the Japanese under the cover of dense fog in the period from 28 to 31 in July, that is, almost half a month before the start of Operation "Cottage". At the same time, the sea approaches to Kysk and the fortifications on the island itself were carefully mined (some of the mines were, fortunately for the marines, destroyed by the air strikes that preceded the landing). Nevertheless, the "assault" of a deserted island claimed the lives of 102 fighters and sailors, several hundred of the operation participants were injured or frostbitten. Most of the dead and wounded were the victims of your "friendly fire" and your own negligence (here we attribute the catastrophic undermining of "Abner Read").

Of course, against the backdrop of the brilliant operations on Guadalcanal, the Admiralty Islands, the Philippines and Okinawa, such a shameful episode of the military history of our partners in the Anti-Hitler Coalition was obscured, but to forget about it, as a matter of fact, the Pyrrhic victory in the history of wars is not it should be, although you should not get involved in the hyperbolization of the lack of professionalism of the Allies ...

Without such excesses, the Soviet troops also did not manage to fight the Japanese militarists. So, 25 August 1945, the 25 th forces of the Soviet army entered Pyongyang, where especially the ideological units of the Japanese armed forces mined their base and prepared personnel for covert evacuation. True, a few minutes before the Japanese had to leave the base, and the Soviet fighters penetrate it, one crew of the attack aircraft Il-10, not without intuition, struck a missile attack at the location of the Japanese.

The result: the detonation of mines and explosives, the death of 42 of the Japanese military and the bloodless seizure of the base under the control of the forces of the Soviet army.

But it could be otherwise. As you can see, the situation is a mirror ... So it remains only to honor the memory of ordinary soldiers and junior officers of the United States and Canada, who were not the victims of the most professional command.