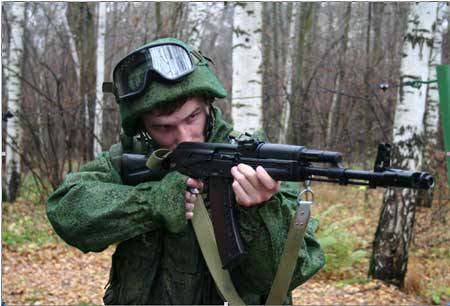 Russian defense enterprises have demonstrated the latest combat kit of soldier equipment. This demonstration took place yesterday at the aerospace show - the anniversary MAKS-2011. The design team decided to create such equipment that would provide reliable bidirectional communication between the commanders and the individual fighters on the battlefield. In addition, the kit will enhance the protection of the soldier.


The kit was created by the Klimovsky Scientific Research Institute of Precision Engineering together with other industrial groups. Equipment, according to experts, is superior to foreign analogues.

More than 20 of various defense enterprises participated in the design and creation of such a kit. These are OJSC “Center ArmoCom”, CJSC “Breastplate”, concern “Constellation, the famous“ Izhmash ”and OJSC“ Cyclone ”.

The kit is equipped with means of protection, communication, destruction, control. It has life support systems and power supply. A soldier who has such equipment at his disposal can actually increase his combat potential. At least this is what the kit developers say.

Vyacheslav Artyukh, Deputy Chief Engineer of the Klimovsky Research Institute, states that the developers paid special attention to the set management system. According to him, now the soldier will become a combat-ready unit embedded in a single information system and will be able to be controlled directly by the high command. In this case, the fighter gets the opportunity to transfer the entire information spectrum to the command rate. As one of the elements of the transmitted information can be a picture from the scene of a military collision. The picture will be provided with coordinates, and for this, the kit is equipped with a chip-based communicator based on both GLONASS and GPS. This will allow him, among other things, to easily navigate the terrain, make calculations, and so on.
The combat system of the combat kit includes: a Kalashnikov assault rifle with the latest modification with a grenade launcher, night and day vision sights, a video module for firing from the corner or a shelter.

A special pride of the design team is an individual Permachka protection kit. This kit provides level sixth grade protection. Such a level does not allow damage to a soldier’s health even when fired from a SVD (sniper rifle) from a distance of 10 m! Russian defenders said that such protection is much more effective than all available foreign counterparts.
Igor Korotchenko, Head of the Trade Analysis Center weapons (TSAMTO), believes that the domestic novelty is a more than worthy answer to the French kit FELIN. Namely, FELIN was planned to be bought into the Russian troops, according to the words of the officials of the Ministry of Defense.
The expert said that such competition with foreign manufacturers of defense products could have a very beneficial effect on the development of the Russian defense industry. He stated this in an interview with the Vzglyad newspaper. 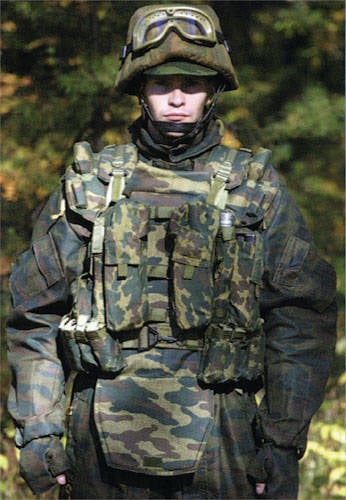 Igor Korotchenko also stressed that such kits are vital for the Russian army. According to him, special units today are not equipped with the most modern types of weapons, and there is no need to talk about modern protection. The whole problem may be a chronic lack of funding.

Most likely, Korochenko summarizes, the new set will be integrated: something will be taken from the French FELIN, and something will be left Russian. So French, most likely, will be electronics, and Russian - protection and armament, because these two components really inspire respect and confidence.

Igor Korotchenko reports that the fighter’s network-centering systems, that is, his inclusion in a single control center, are already being tested in several military units of the Ministry of Defense. However, before the direct implementation of the kits into the troops, there are still a few years.

The head of the military prognostic center, Anatoly Tsyganok, expressed himself in the spirit that it was precisely such equipment that our army really needed. Especially, according to him, reconnaissance units, airborne brigades and ground forces need it. For fighters of the Internal Troops performing various counter-terrorist operations, it would also do well to use kits. Another conversation - the cost of such kits. Perhaps the state will find the means and equip the army with professional ammunition up to 2020.

The expert says that the fact of the release of such equipment by domestic defense enterprises is already a serious step towards the modernization of the army. According to him, in this case, not only the troops, but also the entire military industrial complex, which has been experiencing certain difficulties for a couple of decades, can win. Anatoly Tsyganok is quite inclined to admit that the Russian kit will also interest foreign partners. It's all about its price. If it turns out to be competitive, then the Latin American armies, as well as India, will surely show their interest in equipping.

It is a pity, Anatoly Tsyganok sums up, that the production of a domestic protective kit happened only today. The same Americans started its release more than 20 years ago. All the wars in which American soldiers were tied up over the past 10-12 years have not been without the use of such kits.

Military expert Vladislav Shurygin remarked that “Permyachka” has existed in one form or another in the world for at least ten years. Here the question is not in its production in Russia, but in the modernization of existing models. Modernized "Kalashnikov" also does not leave the mouths of manufacturers for many years. But this is not the main thing. The main thing is that the ammunition really reached the ordinary Russian fighter, and did not remain to show off at the parade stands of defense enterprises.

Mr. Shurygin also says that the appearance of GLONASS-based communicators is a real achievement in terms of the equipment of the set. It should not be forgotten that such global positioning systems can be absolutely useless in the conditions of military operations in mountainous terrain. It showed not ending the war in Afghanistan. Therefore, American experts decided to abandon the use of GPS in such battles, and switch to the so-called inertial system. It really works in any conditions. Therefore, Shurygin believes that GLONASS is certainly excellent, but one should not forget about the realities of the modern war.

The expert states that there should be no financial difficulties for the implementation of the kit in the troops. Nothing prevents the Russian defense ministry and the Interior Ministry from spending money on new equipment for their fighters. Otherwise, it will be purchased by those who can use the ammunition and against our soldier.
Ctrl Enter

We are in Yandex Zen
Combat gear "Warrior" on the way
Domestic army body armor
21 comment
Information
Dear reader, to leave comments on the publication, you must to register.