The end of the eternal American war?

November 14, 2014
11
For more than ten years, American soldiers have participated in eternal war, without achieving any success. Kosovo, Afghanistan, Iraq, Libya - from this list, only the first military operation can be regarded as successful, says American expert Richard Betts, director of the Salzman Institute for Studies of War and Peace at Columbia University and senior researcher at the Council on Foreign Relations. 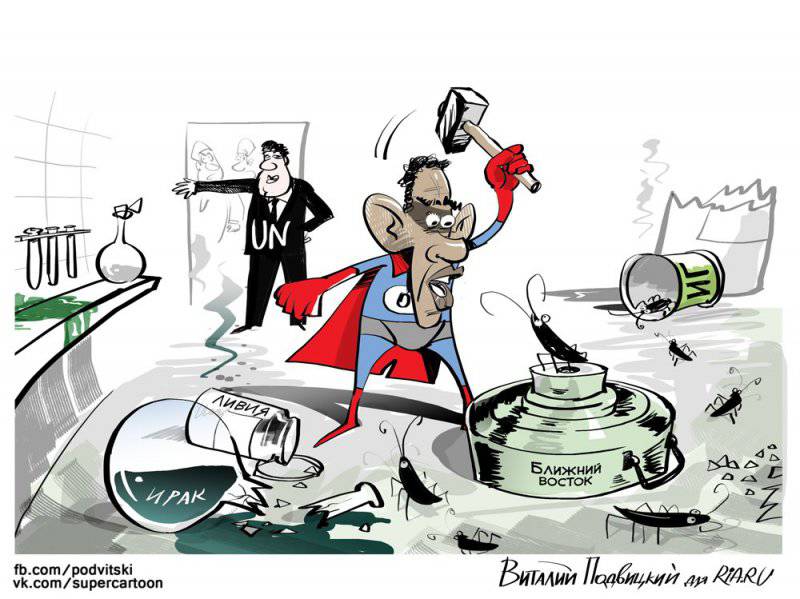 In the latest issue (for November-December 2014) of the influential magazine "Foreign Affairs" Richard K. Betts spoke about the endless war that the United States is waging all over the world. According to the author, the permanent wars unleashed by Washington do not lead to any success, and therefore they should be stopped.

For more than a decade, American soldiers have served as an illustration of the “sad paradox”: despite the unprecedented global military dominance of the United States, these same States are constantly fighting to no avail. Previously, this did not happen in the American stories. Of the US military actions in Kosovo, Afghanistan, Iraq and Libya, only the first campaign can be considered successful, the author believes.

Talking about this seems to the expert to be up-to-date, since at present the US defense policy is a field in which the conflicting politicians find out. Some forces in Washington are dissatisfied with the endless war and believe that military spending should be drastically reduced, others respond that there are “frightening problems” in three regions: Islamic extremists seized large territories in Iraq and Syria, Russia intervened in the situation in Ukraine, and China flexing muscles in East Asia. So what should Washington do? Spit on the whole thing - or vice versa, to strengthen the intervention?

In order to reduce the risk of decisions, the analyst advises to turn to the lessons of the past. Perhaps, the author writes, politicians should begin with the assimilation of a number of points.

Point one. The United States should fight much less often — but if we fight, it is much more decisive than it has been until now. There must be more means for victory rather than less.

Point two. A country should avoid fighting where victory depends on political control: after all, "local politicians rarely do what the Americans want and what is different from their own goals."

Point three. Washington should give priority to the tasks of paramount importance, "emphasizing its military planning on conducting wars with great powers and focusing its diplomacy on their prevention."

Nevertheless, Betts notes, half-hearted measures look very tempting for politicians who “instinctively” look for compromises between the level of military actions in foreign conflicts and objections of “skeptics”.

By the way, in addition to military operations, the United States can use many other tools: diplomacy, economic assistance, covert operations, forces for special operations, military professional training, exchange of intelligence information, and finally deliveries. weapons. It does not make sense to start a war where the goal is not a “decisive” resolution of local conflicts, but it is only about eliminating certain figures or bringing to power the “friendly to Washington” governments. Even if it does not work out, the costs will be small, the author notes.

Military intervention in an unstable country can bear fruit if it serves the development of a stable political system. However, the latter depends on the goals and actions of the country's politicians, the expert clarifies. Yes, such a strategy to combat all sorts of rebels is theoretically recognized by the United States, but in practice the government does not always follow it. Those who implement this strategy too often mix “administrative gains” with political progress. In addition, these people "overestimate the possibilities of political control of Washington by a foreign state." In theory, the United States is calling for democratization, but in reality, the author sneers, provoking the opposite effect: corruption among local politicians is growing, and the country is not only not consolidating, but is falling apart into pieces.

The Iraq campaign launched by Bush Jr. in 2003 was described by the author as “self-harm” (that is, the United States hurt themselves). This campaign was not needed. In addition, her supporters were mistaken, thinking that it would be an easy walk. “Democratization” released the genie out of the bottle: social disagreements stirred up the country, a political conflict flared up, elections did not lead to the formation of a unified government.

In the chapter “Right plans” the publicist discusses the mistakes made by Washington over the past ten years. We must learn from the past, he advises. Politicians planning military operations should ask themselves two main questions. First, how important are the interests at stake? Second, how effectively can these interests be protected by military might?

And here Richard Betts goes to Europe. In his opinion, the time has come for the United States to refocus its priorities on the planning of "inter-state wars" that will be conducted with the help of conventional weapons. And the main priority of the United States should be the protection of long-standing allies in Europe and Asia.

Compared to the chaotic internal wars in the Middle East, threats in Europe and East Asia are more suitable for the use of conventional force, the author points out. In these regions, US superiority in conventional weapons can be a "powerful deterrent." In addition, the United States has successful experience in preventing traditional wars.

In Asia, the analyst indicates not only the danger posed by the DPRK. The focus of his attention is on the rise of China.

And here is Russia. She, like China, the author refers to the "threats of the first order." In the future, both countries are "opponents" of the United States. And both of them could "inflict tremendous damage" on the United States and its allies. Hence the analyst derives diplomatic priority: it is necessary to find a modus vivendi with each country and prevent a slide into military confrontation. If it is impossible to cope with the problem by political means, its solution will fall on the shoulders of the American military: they will have to restrain the enemy or keep the defense, the author writes.

Richard Betts is fairly objective and notes that the Ukrainian crisis erupted not as a result of Vladimir Putin’s aggression, but as a result of “thoughtless Western provocations”, including “unbridled NATO expansion, humiliating ejection from Russia among the great powers and the EU’s efforts to convince Kiev to reduce ties with Moscow. Now the conflict has also complicated the actions of Russia in Ukraine.

Meanwhile, voters in the West do not approve of the outbreak of war for Ukraine. Reducing the degree of the new cold war in Europe may require political compromise: for example, more autonomy for eastern Ukraine, and for Kiev, a neutral foreign policy.

However, Russia's actions, Betts believes, have heightened the concerns of NATO countries, especially new members of the alliance. If Russia continues its aggression, the answer will be the deployment of NATO forces in Poland and the Baltic countries. And the conflict with Moscow will escalate.

“Fortunately for the West,” writes the analyst, “if the need for deterrence and defense in Europe really becomes a serious problem again, it will be much easier to accomplish this mission than during the Cold War. The balance of both military strength and geographic vulnerability, which at the appropriate time seemed like NATO dangerous, today, with a large margin, leans towards an alliance with the alliance. Russian generals can no longer dream of a blitzkrieg with a final on the English Channel. Even without nuclear weapons, Putin should know that an attack on a NATO country would be suicidal. Russia's economy is not in the form to finance a truly serious military confrontation. ”

Washington should understand that Moscow is “far from as wild and crazy as Pyongyang,” the publicist remarks. In addition, the majority of US NATO allies are now spending less than half of what the United States spends on defense (based on GDP), and this, too, cannot be ignored.

So, the choice of strategy requires sound judgments about what goals are facing those American soldiers who have to risk their lives. It is important to remember about foreign civilians. In Afghanistan and Iraq, US officials underestimated neither cash costs, nor the blood that was shed. The tragedy of the situation is that the attack on Iraq in 2003 only damaged the national security of the United States: Washington has many more enemies in the Muslim world.

All these miscalculations, the author believes, stemmed "from the irrepressible ambitions of the Republicans and Democrats," who wanted the United States, eradicating injustice everywhere, to bring "order in the whole world," often doing so "at gunpoint." And all the creators of the war were "incredibly surprised" when their "noble goals" met fierce resistance.

The era of permanent war gave the United States a harsh lesson. The main conclusion that the analyst made from these lessons is the inadmissibility of the use of the US military machine "to achieve secondary objectives."

Global primacy still gives the US more room to maneuver than it was during the Cold War, says Betts. However, as tensions grow in relations with Russia and China, the space for maneuver narrows.

And the expert advises the United States to “moderate its ambitions”, inspired by the dominance in the global arena after the Cold War.

Thus, R. Betts not only reviewed the history of US military operations in the past ten years and summed up the disappointing results for the White House, but also concluded that the time of endless wars for Washington should be a thing of the past. The US Army needs to get away from where it multiplies suffering, breeds political and social crises, and instead of the promised democracy it sows corruption and division.