The triumph of Ukrainian absurdity or the hand of Moscow? 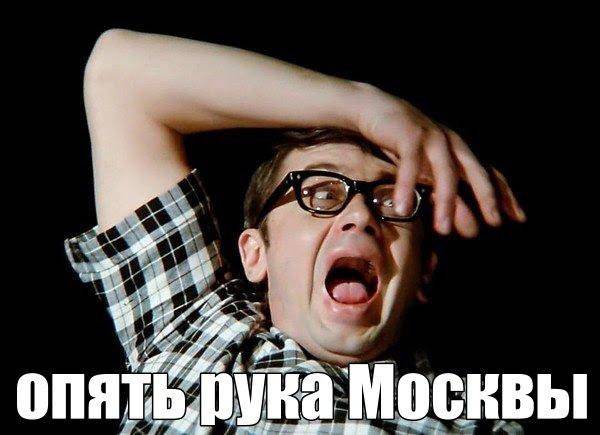 Not long ago, the Maidan triumphed with exclamations that threw off the “yoke of Moscow”, and finally Ukraine gained independence. Signed an Association Agreement with the EU, which already guarantees Europe the control of the Ukrainian authorities. But until now, ordinary Ukrainians are “nightmarish with the hand of Moscow”! This justifies everything. Let's look at some of the problems that are attributed to the “hand of Moscow”.

200 FSB agents to blame for banking crisis in Ukraine

“There will be a lot of panic moods and attacks on our course. Now, as Mr. Nalyvaychenko said, 200 agents of the FSB are working to loosen the banking system, ”Valeria Gontareva (head of the NBU). 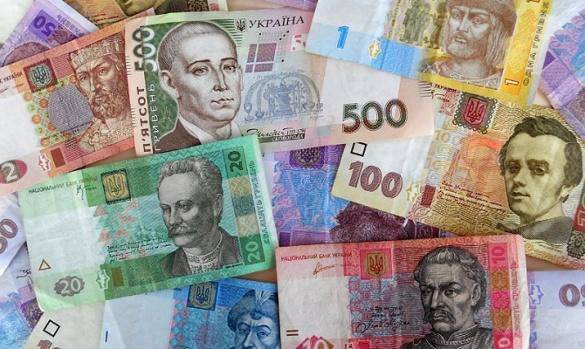 Opinion.
Immediately I want to understand where such astonishing accuracy of the data comes from, that the “agents of the FSB” are exactly 200, no more, no less, and how do they act? And if there is accuracy in quantity, it means that “names, passwords, appearances” must be known. Why not delay these 200 agents who every day the NBU stagger?

Yevgeny Kiselev accused the Russian special services of not allowing him to enter Ukraine.

If anyone does not know, we have such a Yevgeny Kiselev - a well-known journalist in Ukraine who is loyal to the Kiev regime. Among other things, he has a residence permit in Ukraine. More recently, before the parliamentary elections in Ukraine, Boryspil airport border guards detained him. 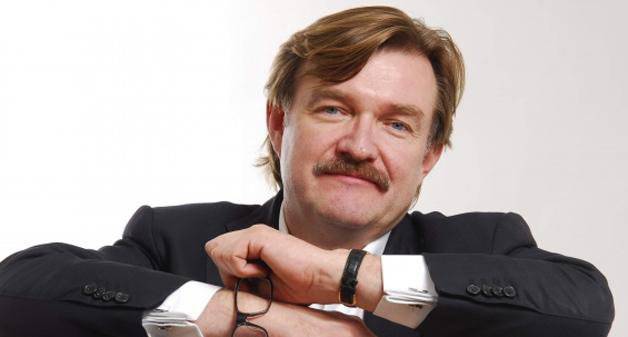 Here is what he says on this occasion: "I have detractors in Russia, where I belong to the fifth column - to those people who support Ukraine. I do not rule out that Russian special services may have long arms, and they are here." they planted such a pig. ”After all, for today's incident it was not necessary to have people at a high level — some driver could make a mistake, too, who would forward the name.”

Opinion.
So, the prehistory of his detention was the situation that our TV presenter Dmitry Kiselyov was denied entry to the territory of Ukraine. In this regard, the first question is of course, why change the name of a certain driver to prohibit Eugene from entering the territory of his beloved country? Maybe the problem of Yevgeny Kiselev is completely different? Maybe he himself provoked his detention in Ukraine in order to draw attention to his person?

Ukraine accuses the FSB of Russia in organizing garbage lustrations.

“It is unacceptable when lustration acts that way. Garbage cans are a special project of the FSB of Russia. They show a picture for Russian propaganda that everything in Ukraine is terrible and catastrophically bad ”, - Volodymyr Groysman (Deputy Prime Minister of Ukraine). 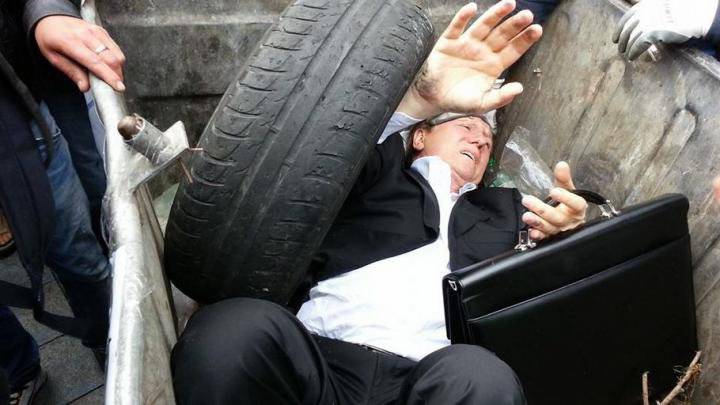 Opinion.
It will be surprising if Ukrainian authorities will soon declare that such organizations or parties as the Right Sector or Freedom are nothing but a project of Russia. It is they who today carry out more people's garbage lustrations. However, at the same time, thanks to these radicals, a revolutionary coup in Ukraine was accomplished.

Kiev accused the FSB of Russia in provocations in Odessa.

“What we saw in Odessa is a provocation by the FSB to divert attention from the antiterrorist operation. They want to show that our situation is unstable, but the example of Odessa showed something else - the people’s patience is already exhausted, ”- Sergey Pashinsky (head of the presidential administration of Ukraine). 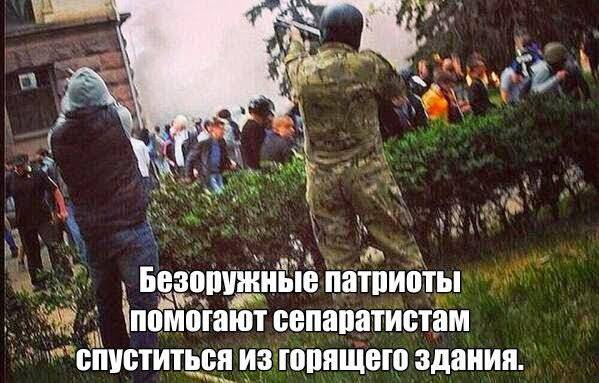 Opinion.
Immediately I want to learn from Pashinsky, and why those people ("provocateurs of the FSB"), who appear in the photo and video with the tragedy in Odessa with weapons and bits, still not delayed? Wouldn't the “harsh and fair” court of Ukraine should have already planted all these “provocateurs” years of commercials on 20-30?

Petro Poroshenko accused the loyal TV channel "Espresso" in the work of the FSB.

Petro Poroshenko, speaking today at the Lviv National University, urged not to spread the “FSB lie” about the thousand dead near Ilovaisk. However, this information was heard on the TV channel "Espresso", which is absolutely loyal to the new Kiev authorities. And the man who publicly voiced the loss was the former head of Ukraine’s foreign intelligence service. "This lie of the FSB about the thousand dead near Ilovaysk send to the Kremlin and do not dirty our army", - Petro Poroshenko.
According to him, all in the east of Ukraine, 967 people died, including military, border guards, soldiers of the National Guard and the Security Service of Ukraine. 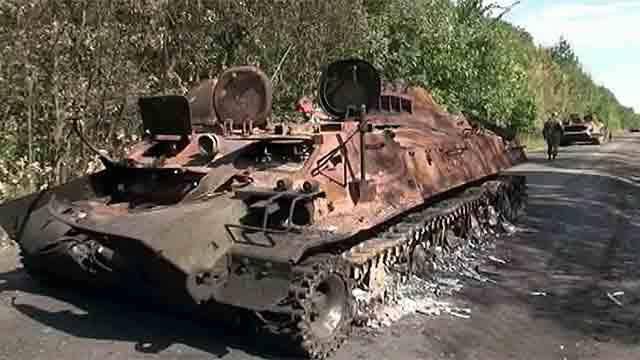 Opinion.
Well, here, as they say, without comment. But I want to ask Poroshenko one question - are the UN and the OSCE also working for the FSB? According to their data, there are already more than 4.000 dead in the Southeast, not to mention missing. Of course, his data can be close to reality, only if he considers the civilian population of the South-East to be non-citizens of Ukraine.

Arseniy Yatsenyuk accused Russia of trying to “freeze” Ukraine, depriving it of gas in the winter. “They want us to freeze. Here is another goal and another trump card in the hands of Russia. So, in addition to the military attack, in addition to the military operation against Ukraine, they have another trump card - this is energy ”, - Arseniy Yatsenyuk (Prime Minister of Ukraine). 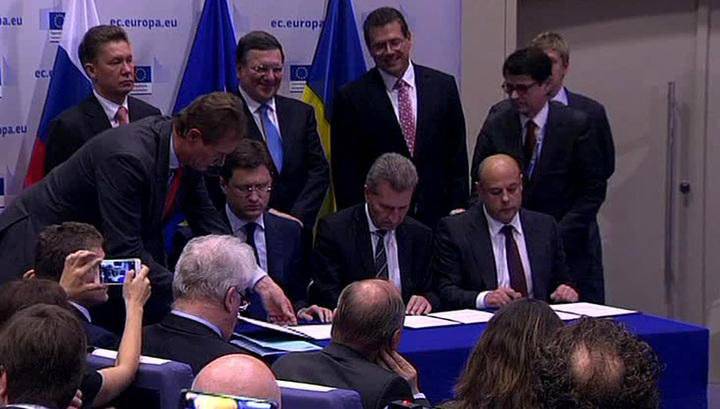 Opinion.
Any person, at least a little connected with the business, most quickly understands that it is impossible to deliver goods without payment, no matter how good you feel about the buyer. The maximum that can be done is to give a discount. What, in fact, Russia provided Ukraine. For which the Russian authorities listen to a lot of internal criticism. Let's imagine that gas is a tangible asset. That is how it is. Why not Yatsenyuk blame Europe and the United States for not delivering money to Ukraine for free and without compensation? And why does Poland refuse to supply coal to Ukraine for free? Also want to "freeze" Ukraine?

SBU accuses the FSB in organizing the action with the participation of conscripts of the National Guard.

The SBU has irrefutable evidence that the rally with the involvement of the military of the National Guard of Ukraine was instigated from the outside by the Russian special services, in particular the eighteenth center of the FSB, which plans and tries to organize information attacks against Ukraine.

“The idea was to make these actions massive, but thanks to the joint actions of the Security Service of Ukraine and the Ministry of the Interior, they were prevented and neutralized,” Markiyan Lubkivsky (Advisor to the Chairman of the SBU). 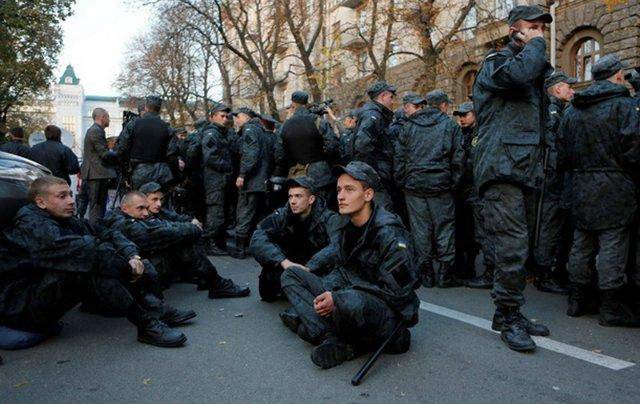 Opinion.
If we consider that the National Guard under was collected from the most notorious supporters of the Maidan, then the attempts of influence from Russia on them can be reduced to zero. Maybe the problem is the promises of the Ukrainian authorities? Remember how Poroshenko himself promised untold riches to those who are fighting in the Southeast. And the reality is the opposite, that even the wounded soldiers of the National Guard should have to look for money to pay for their treatment.

Yatsenyuk accused Moscow and the FSB of the fact that the population of Ukraine is demanding higher social benefits.

Russia is trying to destabilize the situation and for this purpose uses agents “sent here decades ago”. “Their Russian plan has changed: from political destabilization, separatist ideology to social and economic destabilization,” Arseniy Yatsenyuk (Prime Minister of Ukraine). 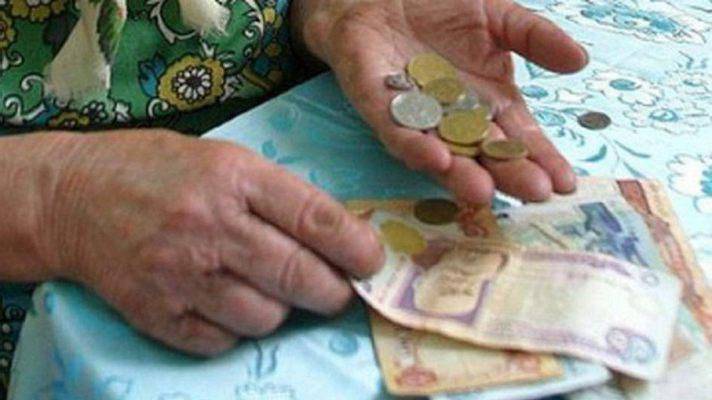 Opinion.
Quickly Arseniy Yatsenyuk, like all the power of Ukraine, forgets his promises on the Maidan: “Power to the people, the land to the peasants.” Such statements are just an attempt to disguise the demands of the IMF and shift all the problems, as always, to Russia. So, to obtain financial support from the IMF and the EU, Ukraine must make cuts in civil servants, remove subsidies for housing and communal services, raise the retirement age, and others
charms of European integration. But you can always tell the people of Ukraine that it is not their policy that is to blame, but Russia.

From the last - the election!

The All-Ukrainian Union "Svoboda" declares the falsification of the results of the extraordinary parliamentary elections. "The striking difference between the results of the exit polls and the data on the counting of votes published on the website of the Central Election Commission indicates large-scale fraud," the report says. In Svoboda, they say that Russian President Vladimir Putin and his agents are doing everything to prevent the party from entering the new parliament. 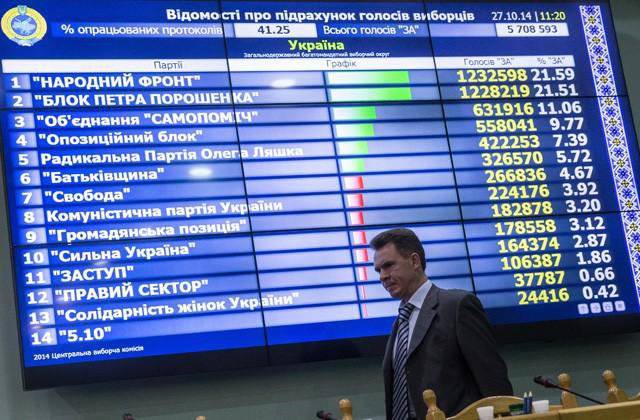 Opinion.
Rigging? Yes, there were, and massive. Only not because of Russia. This is a requirement of Europe and the USA. Well, and “Freedom” and the “Right Sector” would like to offer condolences. On the Maidan they were used and thrown out. That is the reality.

I believe that the most radical of Ukraine’s parliament would be the most profitable for Moscow, in which case Europe would see who they brought to power in Ukraine. At the same time, though less radical power is now, but it is close to the power of Yanukovych, just as flexible, it will also try to sit “on two chairs”.

Conclusion.
I didn’t specifically bring such statements of Yatsenyuk to the court: “Russia didn’t show up for the war, but we waited.” The above statements - ABSURD. But still I want to add a little humor, which is not so far from the "statements" of the Ukrainian authorities.