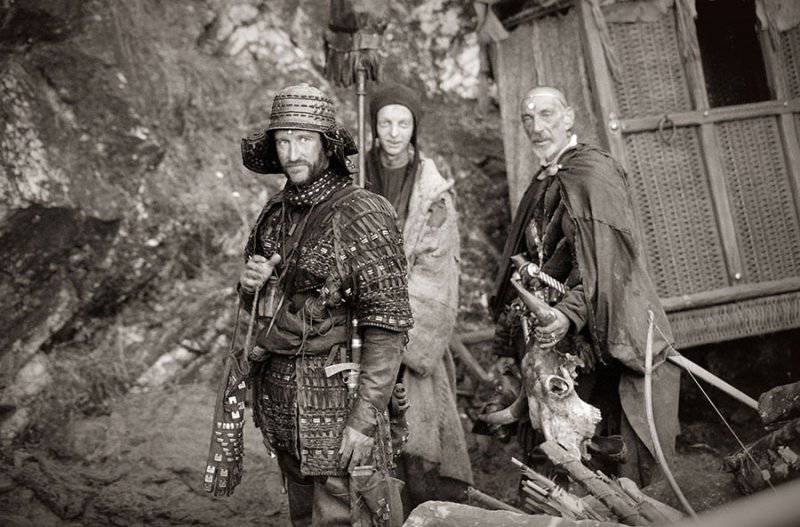 All historical and factual errors in the text are either artistic devices - or the inborn ignorance of the author. Or is it the hand of imperial censorship.

It was still relatively warm in the south.

General Proconsul Publius Quintillian North woke up quite early - here, in the south, daylight was relatively longer, and the conditional “warmth” outside the window allowed local nomarchs to say that fireplace heating is an inaccessible and unnecessary in military conditions luxury. Moreover, the firewood for the fireplaces somehow ended up on enemy territory - the Tumidians were standing on the west bank of the Lower Dnovts and were not going to take any active actions until spring. And it was the worst of all.

Previously, olive oil and industrial wood were floated along the Dnova from the Capital. It was already some impossible time now, when everywhere in Tumidia one could still see stellae with the inscriptions “Tumidian and Roman are brothers forever,” and no one had yet felled the monuments to First Caesar with hemp ropes and a crowd of excited “real Tumidians.”

"Who does not jump - he is a frost!" What a stupid slogan, noted Publius.

Merzlyak sounded equally foolish and disgusting, evoking associations with "bastards" and on a dank morning, which gradually brightened outside the window of the proconsul’s dugout. “Frosted” now called Romans in Tumidia - despite the fact that even now half the inhabitants of Tumidia were ethnic Romans, and just a quarter of a century ago, before the Great Decay, all the inhabitants of Tumidia were citizens of Rome.

Now everything has changed. Olive oil became a luxury, instead of the commercial wood of Rome, local kings proposed to the Tumidians to jump, to tumble down Roman monuments - or to cut low-growing trees, twisted by time, trees in the flood plain of Lower Dnovts.

However, on the side of Publius there was not even such luxury. There was only a bare steppe. And almost five million "separatists" of New Rome, whom Tumidia has been trying to "bring the original crown of rulers of Tumidia to power" for six months already.

It is clear that the Tumidians never had any mythical “crown”. It was the Wild Field, where Rome came in due time, knocking out the slaves of the Porta slave traders. But - to whom now what and where will you prove. After the Great Decay, Tumidia contacted Cartagena - and Cartagena was now quite a successor to the old Porta, who did not disdain any false and vile methods of manipulating her vassals.

An example of such a false and vile manipulation was the “revolution of the birthright”, which agents of Cartagena turned in Tumidia. Publius had a bad idea of ​​all these intricacies of Tumidian policy and the rights of succession to the throne - but he understood very well that the actions of the new “sovereign” Tumidia were unequivocally hostile to Rome. And this was enough for him to, without doubt and without hesitation, faithfully follow his Roman oath. And protect the Romans wherever they are now. Even in the ephemeral “Tumidia”, which will not be on the map tomorrow, as it was not the day before yesterday.

Publius squinted at his lorica segmented, which hung near the head of his bed. The bed was uncomfortable, and Lorica segment was ridiculous. The capital now already made completely different models, lighter and more durable, which were comfortable to wear and easy to repair. But Lorica Publius was an old model - the one that was used before the Decay. On the front chevron, which was attached to it, there was an inscription in classical Latin “call sign Ravenna”.

The conspiracy of finding a limited Roman contingent on the territory of Tumidia was forced and necessary. After the collapse, the then First Consul foolishly signed the Cartagena Consensus, which legally established the status of Tumidia separate from Rome. And now, Publiya, as well as hundreds of other “volunteer-vacationers”, had to disentangle that old drunken stupor, the idiocy of the First Consul, who had a decade rested in Peace.

The Romans were here - and there were an overwhelming majority of them. But the quarter-century dominion of Tumidia and Cartagena was already clearly felt here — signs everywhere were barbaric, “spoiled” Latin, and instead of the imperial eagle, the ancestral tamga-trident of the “original Tumidians” came across.

But the worst was not that. In New Rome, it was necessary to practically rebuild an army — and to build it literally “from scratch”.

All volunteers from the local were poorly trained in the handling of imperial technology. No one really imagined how a siege cannon works — or how to control a real war chariot. Tumidia loved parades and uniforms — but she did little real doctrines, if not to say that she didn’t do it at all. As a result, local volunteers were certainly motivated to protect their homes and cities — but they clearly lacked specific military skills.

As a result, wherever it was possible, we had to use “vacationers”. And along the way, explaining to the Novormalians that their task is reconnaissance, advanced units, light infantry, and possibly accompanying chariots. But working with siege weapons or driving the chariots themselves is better left to the people of Publishers. Just as it is necessary to rely on them in matters of staff work, organization of supply and give them the unified leadership of the new army.

In addition, the problem was that the people of Public could not directly come into contact with the Tumidian battle formations. And, moreover, they had no right to be captured.

The problem of interaction with the Novorilians was complicated by the fact that Publius and his people were not officially in the territory of New Rome. He was a ghost man whom all of his interlocutors knew exclusively as Ravenna. His title as Proconsul General was forbidden to be mentioned here on pain of decimation of the faulty unit. Here, to be honest, there were the orders of Primordial Rome - the bodies of inquiry and the court organically combined with the punitive machine.

The problems of New Rome were monstrous. In the first period of the war, the Tumidian nobility captured almost all the army arsenals. Fortunately his weapons For a quarter of a century Tumidia did not create, therefore its arsenals were filled with the same Roman piluma, lorik and arrows. There were all the same rusty chariots of war and siege weapons, and the observation balloons of Tumidia would now simply not be able to be repaired without the help of Rome.

Therefore, immediately after the start of the Novorim rebellion in the capital a simple but very effective plan has matured. Directly, because of the fool and drunkard of the First Consul, the Capital could not interfere in the internal affairs of Tumidia. Cartagena consensus, your mother. Well, the Cartagena spies under each bush - even in the newly declared capital of New Rome.

I had to use workarounds in this war. And to invent, as always, the "Roman bicycle" - literally on the knee.

Initially, of course, helped the Island of Rome. This southern province of Tumidia broke away from it a month earlier before the uprising in New Rome. There, similar events took place almost without bloodshed, as a result of which the mass of the old Roman junk from the same Tumidi warehouses fell into the hands of the Capital. His condition was terrifying, the Tumidians did not do anything on it, except for inscriptions on spoiled Latin for 25 years, but the Capitals workshops quickly put in order about a dozen chariots of war that stood before this in the mountains of the Island of Rome.

It was these chariots that they then threw over the insurgent Novorilians at the beginning of June through the Blizzard.

A similar situation was with siege weapons. All that the Capital in New Rome could not deliver officially was heavy catapults that would have hit the operational depth in Tumidian constructions. But the rebels of New Rome received light and medium catapults in abundance - in the same way as the projectiles to them.

Yes, thought Publius. “Few people know how many missiles are needed according to the military roman charter to suppress the command post of even one cohort. How much a supply needs to be organized across border rivers, how difficult it is then to create at least an operational supply of stones for catapults and sharpened stakes for a ballist! But even one shot of Grad ballista is almost 5 tons of sharpened stakes, packed in special boxes ... "

These sad numbers constantly, every morning spinning in the head of Publius. Tons and tons of ammunition - from arrows of the 5,45 caliber and ending with stakes for the Gradov - went across the border. For the third month already they tried to take the border of the Metropolitan Lands and New Rome under “international control”. Phew. “Present only!” Thought Publius. “The Cartagena Falcons of intelligence will circle above the Capital Lands! There will never be such a shame. ” It’s better to help New Rome with my volunteer vacationers, it’s better to clean up all the rusty chariots from the capital’s warehouses right up to the Riphean mountains - and even to the Outskirts Ocean, called Great and Silent, it’s better to constantly risk with supplies stuck on the fords of the border rivers - but here are these Cartagena creatures in the land of New Rome — and indeed there should not be any Tumidia.

And in the coffin, I saw the First Consul and his Cartagena Consensus drenched in blue in his native city!

“Damn it with the vacation. There is no money here anyway and there will not be - this is the condition of the Capital. Maybe - they will give the Consul General for good service - well, thanks for that. ”

Thus began another difficult day, General Proconsul Publius Quintillian of the North, on the newly acquired capital of New Rome.