"New Russia should become the best part of Russia!" 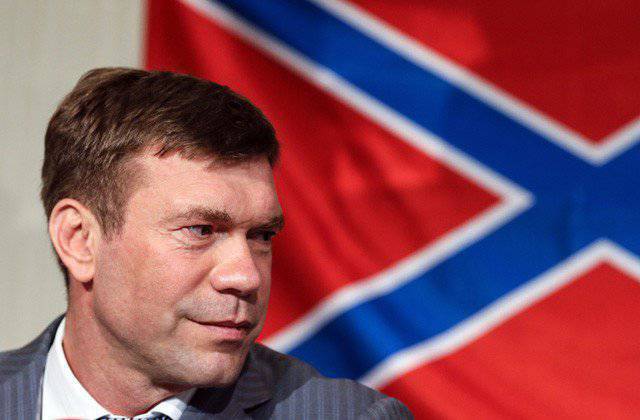 The head of the parliament of the self-proclaimed Novorossia, Oleg Tsarev, told the Russian Planet about the elections in the unrecognized republics
Next week, the first parliamentary elections are to be held in the self-proclaimed Donetsk and Luhansk People's Republics. The correspondent of the "Russian Planet" talked about the election campaign in unrecognized states with the head of the Novorossia parliament Oleg Tsarev, who was once the closest supporter of the ex-president of Ukraine Viktor Yanukovych.

The former deputy head of the Ukrainian Party of Regions now sits in an office in the very center of Moscow, on Ilyinka Street, next to the administration of the President of Russia. At his office people of an impressive type in a military camouflage walk. On the table of Tsarev himself, four mobile phones are laid out in a row, which are ringing incessantly.

“Well, the new iPhone is a good thing, I have already bought it,” Tsarev informs someone from the telephone interlocutors. To the question of the RP correspondent about how to call his position right now, Tsarev, sighing, throws his business card on the table.

- It seems that most of the time you spend in Russia, although your position is called “the head of the parliament of Novorossia”. How could you characterize your activity now?

- I do not know how to describe me. For example, I recently returned from an inter-parliamentary visit to South Ossetia, where I met with local deputies and the head of the republic, made contacts, answered questions. He studied the experience of South Ossetia, which is similar to ours.

- Let's talk about the elections in the DNI and the LC. Now it is clear what territory will be voted on?

- On the territory where we can.

- I.e? Concrete territory is now known? Can you imagine how many polling stations there will be?

- I do not own the technical data, you should speak about them with the CEC (Central Election Commission. - RP). And if we talk about the procedure itself, then on November 2 parliamentary elections will be held DNR and LC. Then the elected deputies of the DPR and the LPR will choose the general parliament of Novorossia. As it is done in all confederations. In the parliament of New Russia will be both people from the deputies of the DNI and the LC, and outsiders.

- Who organizes the election?

- Central Election Commission. These are people with experience in conducting referendums in the LC and the DPR. We have made a good step forward in the development of statehood! The frames in the CEC are good.

- Will you participate in the elections?

- Perhaps I will participate in the elections of the general parliament of New Russia. But it will depend on whether people trust me. There will be no self-nomination procedure. Only public groups can be nominated.

- So you want to be nominated?

- Why do New Russia now elections? In the courtyard, war, power, regardless of the outcome of the vote, will remain in the hands of field commanders, not deputies.

- It is necessary to choose the power that will be vested with legitimate powers delegated to it by the people. Need legitimacy and authority. It is not right for the officials to appoint themselves and make the decisions they need. Powers must be trusted by officials people. This is a global system! Nothing else is invented. 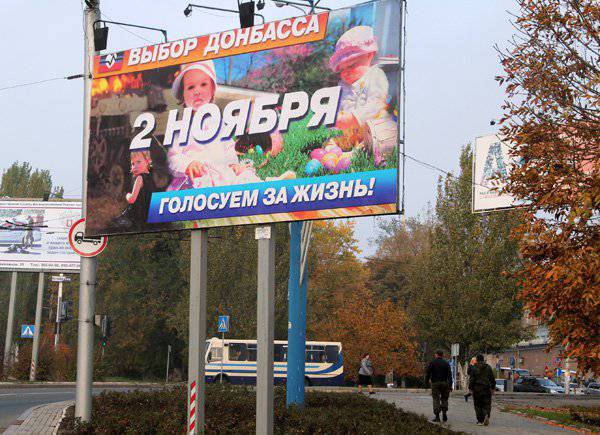 Pre-election poster on one of the streets of Donetsk. Photo: RIA News

- That is, before the legitimacy you lacked?

- In truth, such a quick appointment of the elections of the DPR and the LPR looked like a response to the dissolution of the Rada in Ukraine and the appointment of parliamentary elections there.

- We said that we will hold elections as soon as the opportunity arises. As the level of military confrontation decreased, we immediately went to parliament. In the construction of statehood can be divided into several stages. First, we held a referendum on independence. Secondly, the recognition of New Russia by South Ossetia. Thirdly - the upcoming elections. The next stage will be the restoration of the economy and the restoration of normal life in the region. We are clearly going according to plan!

- Are you satisfied that the elections in Novorossia will be held in a smaller part of the territories of Lugansk and Donetsk regions?

- This is normal. We consider it necessary to carry out as it is. If our territory increases - no one bothers us to conduct by-elections on the annexed lands.

- Recently, the President of Ukraine Poroshenko adopted a law on the special status of the territories of the DPR and the LPR. Then your Deputy Prime Minister Purgin called it the right step on the part of Ukraine, and the next day, the head of the DPR Zakharchenko said that he didn’t care about Kiev’s decisions. What does it mean?

- They are both right. We welcome the signing of the law on the special status of individual regions of the Donetsk and Lugansk regions. We believe that this is not a guide for us to act, we regard this document as a gesture of goodwill, for which we see Poroshenko’s desire to negotiate peace. But we have laws in the territories that are passed by the parliaments of the DPR and the LPR. Throughout the rest of Ukraine, let the laws of Kiev be valid.

- That is to you, by and large, there is no business, what Poroshenko accepts there?

- Simply put: yes, it is. But there it is still curious that in this document the Ukrainians called our republics the word “Pridonbasye” - this is, as it were, a Freudian reservation. Because “Pridonbassye” is a territory that is adjacent to the Donbass, namely, all of Ukraine. 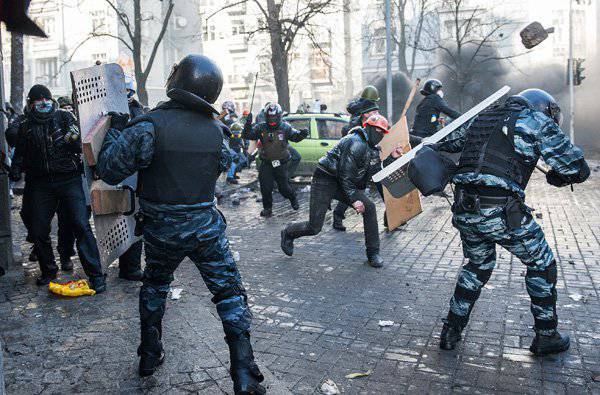 “I recently read an interview with Zakharchenko, in which he spoke very paradoxically:“ after the conclusion of an armistice with Kiev, Novorossia was only defending itself, but in between times seized 38 settlements. ”

“I hope that the territory of Novorossia will be replenished not by conquests, but thanks to the peaceful transition of the territories of Ukraine to us.” The project of Ukraine without Russia is not viable. If we leave a state of humanitarian catastrophe, Ukraine will enter this state.

- Would you like to say that, depending on your success, Ukraine has proportional failures?

- I want to say that Ukraine is unlikely to last more than a year with such a power. And, apparently, new regions will join the New Russia. But Novorossia was conceived because of the implementation of the anti-Russian scenario in Kiev.

- The purpose of Novorossia is to become part of Russia?

- To become the best part of Russia!

“When I spoke to you in the winter, the Maidan was in full swing, and you argued that the Ukrainian security forces had every right to harshly suppress people who went to the streets of Kiev from weapons. However, you didn’t talk about the people who came out with weapons in Donetsk and Lugansk. Is there no contradiction here?

- During the Maidan, I have repeatedly said that it is necessary to stop what is happening, because otherwise a civil war will begin. Nobody listened to me. I said: let's stop, but, unfortunately, was not heard.

- But why, in your opinion, during the Maidan it was unacceptable to take up the armature, and in Donetsk it was already possible to arm with machine guns?

- People have the right to make decisions in the framework in which they dispose of themselves. Especially if they find themselves in a situation like this spring in the Donbas.

- It is believed that the forces of Novorossia were divided into two camps - “the party of war” and “the party of negotiations with Kiev”. Moreover, the "war party" was actually out of elections. In particular, one of the most famous characters in Novorossia, Igor Strelkov, does not participate in them, and the former “people's governor” of the Donetsk region Pavel Gubarev is not allowed to take part in the elections.

- How is Gubarev not allowed? I don't know about that. But I know that ten people from his supporters are admitted to the elections. I have not heard about the fact of non-registration of his political power.

- But this is not quite so. Because there was a message that he was not allowed before the elections, then Gubarev promised to make some important statement about his participation in the elections, after which he was attacked, and no statement was made.

- I think you have unconfirmed information. And about the division of opinions into two camps - this is normal. We have pluralism. 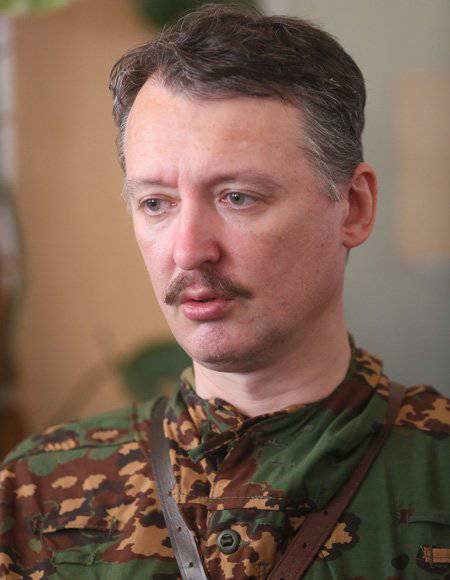 - Why is the Shooters not participating in the elections?

- We must ask him. He left Novorossia. How is he elected? In addition, in the electoral legislation, we have a point on which it is impossible to put forward, without having lived in the last five years in the Luhansk or Donetsk regions. Therefore, neither I nor the Strelkov can be elected to the parliaments of the DPR and the LPR.

Other prominent people of Novorossiya can not be elected, including, for example, Sasha Borodaya (former Prime Minister of the DPR. - RP). By the way, I saw Igor [Strelkov] recently. We were on the recording of one of the versions of the anthem, which was performed by Vika Tsyganova.

- Have you discussed the affairs of New Russia?

- No, just met and said hello. He is more involved in domestic politics in Russia, rather than Novorossia.

- And how do you feel about the fact that the Strelkov and other Russians at one time came with a weapon to fight on the territory of Ukraine?

- Nobody came with a weapon; Russian border guards with weapons would not have missed them. More than two thousand Russian volunteers fought in Serbia. We have a lot less.

- I think that's right. A person can manage his life as he wants. And a person has the right to be where he wants.

- In Russia, when, say, the Americans are trying to influence something, the phrase “export of revolution” sounds. And the Strelkov and others did not export the revolution in the Donbass?

- Not. After all, the vast majority of participants in the events in Novorossia are local residents.

- As I understand, some problems have now begun with humanitarian convoys to Novorossia. This is true?

- People get tired of any events. From the war - even more so. The reaction of the Russian media and ordinary people can see it. It was very strong shock from the events in Ukraine. This property of the human psyche: close and hide from problems. Difficulties with humanitarian aid are small, but present. This is probably due to the fact that the Russians are tired.