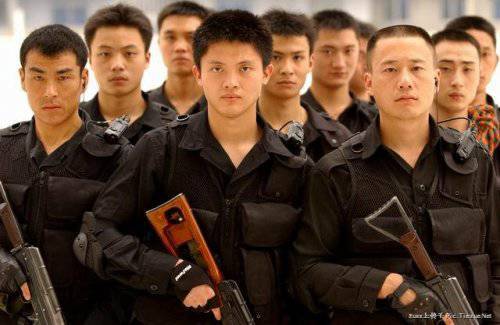 Professional and organizational development dates back to the middle of the 80 of the 20 century. The starting point for the development of special forces was the conclusion made in June 1985 by the Military Council of the CPC Central Committee headed by Deng Xiaoping that in the foreseeable future there was no possibility of large-scale armed conflicts using conventional armed forces. The next powerful impetus to the revaluation and reform of military concepts was the Gulf War.

The most likely was an intense, short-lived and high-tech conflict in the periphery of China.
The first most functionally completed unit was formed in the 1988 year in the Guangzhou Military District. 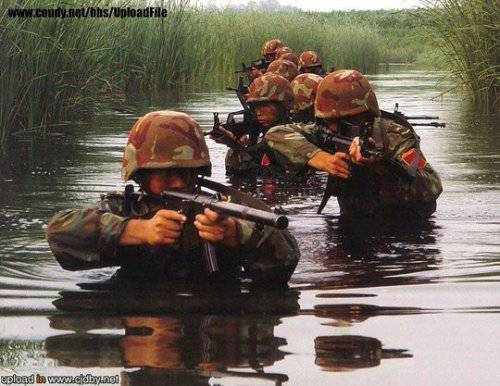 Organizational Structure
Each military district of China (there are seven of them) has its own special regiment subordinated to the district command (3 battalion with a total of about 1000 people), and each level has its own special forces unit: corps - battalion (total 18 battalions, by 300-400 people each), brigade - company (about 120 people), at the level of the regiment - platoon (30-40 people) Level of preparation, as well as equipment from the regiment to the brigade, from brigade to body, and from body to district rises significantly.
The regiments of special forces in military districts (VO) are painted as follows:
1) Shenyang IN - 'Dongbei Tiger' ('Dongbei' in Chinese, Northeast, Manchuria, which has become the nominal name of the three northeastern provinces of China);
2) Beijing VO - 'Magic Sword of the East';
3) Nanking VO - 'Flying Dragon', formed on 1992;
4) Guangzhou IN - 'Sharp Sword of South China', formed in 1988;
5) Lanzhou IN - 'Night Tiger';
6) Jinan VO - 'Hawk';
7) Chengdu IN - 'Falcon', formed in 1992.
In addition, the special forces units include the Marine assault landing force, the “Marine assault landing force” and the air assault force, the Sharp Blue Sky sword.
Do not belong to the special forces, but undergo training in a lightweight special forces program, which is nevertheless much more complicated than the training program for ordinary PLA soldiers 162 (as part of the 54 army), 63 (as part of the 21 army) and 149- I (as part of the 13 army) divisions high alert. The next in terms of training are 1 (Hangzhou, Nanjing VO), 38 (86 thousand, Baoding, Beijing VO), 39 (75 thousand, Yingkou, Shenyang IN) and 54 army (89 thou. people, Xinxiang, Jinan VO) of the rapid reaction army (readiness time from 2-7 days). And the last groupings are the three most equipped and combat-ready armies of China.
In addition to army special forces, there are also Special Forces of the Armed Police (hereinafter referred to as VM, one of the components of the Chinese armed forces) and subunits of the Ministry of Public Security (hereinafter referred to as MOB) units of the Special Forces of Public Security Forces.
There are also special units that only fragmentary information is publicly available, and that has only recently appeared - the Panther anti-terror units (according to some sources, possibly attributed to the Chengdu IN, may have been a predecessor or in some way belonged to Falcon ), 'Snow Wolf' (subordinated to VM, currently, together with the Beijing Special Forces, the ISB is involved in preparing security for holding the Beijing Olympiad at 2008, by the way, the total number of security forces at the Olympiad will be more than XNU MX thousand people.) And others ...
China's “elite” special forces unit in which, from 1982, only the best of the best gather from all over the country, the anti-terrorist unit Vostok stationed near the Beijing airport, the full name is the anti-terrorism unit of the special purpose police 722 of the Special Forces Training Institute . The Institute itself was founded in 1983. During the 23 year of its existence, he released more than a thousand people, most of whom became special forces instructors. The rigor of preparation can be indirectly indicated by the fact that in all this time, almost half a century, the 'complete difference' has received 3 (three) graduates. 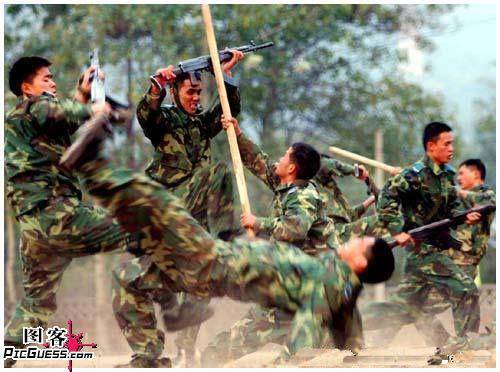 appointment
The special forces of China is one of the main components of the Chinese Rapid Reaction Force, which must wage war in conditions of limited regional conflict and the use of the latest military technologies, including point shots outside the zone of vulnerability for the enemy.
The functions of the special forces include: intelligence, short-term and / or small-scale military operations and anti-terrorism activities, including and the destruction of separatist formations.
So in October 2002, units of special forces participated in joint anti-terrorism exercises with Tajikistan. 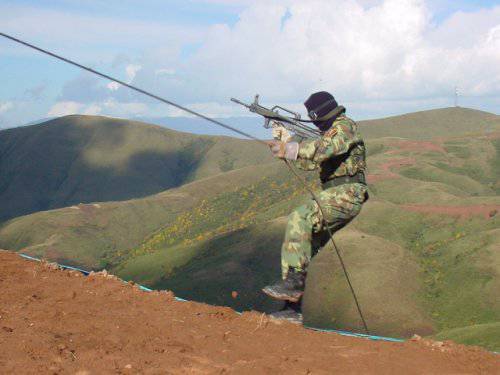 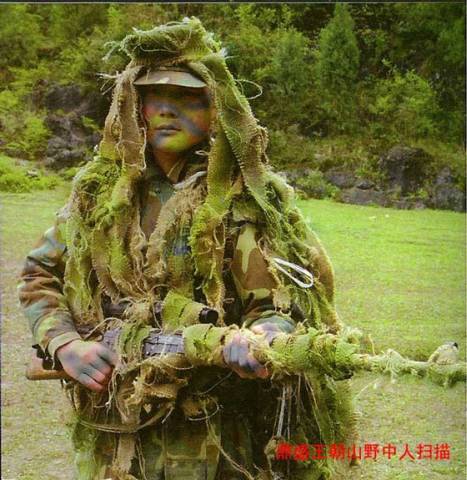 Prepare
The training of army and police special forces is carried out according to the methods developed by the PLA General Staff, taking into account the peculiarities of using each individual unit, with the complexity of training to the level of the psychological and physical limit of human survival.
The leadership of the Chinese special forces believes that the physical, psychological and professional training of their fighters has no equal in the world.
Training fighters is divided into two parts: basic and professional.
The basic includes: the whole complex of normal physical exercises for strength, agility and endurance plus hand-to-hand combat and self-defense without weapons, survival skills in field and extreme conditions, mountaineering training, crossing water area in full equipment, all types of small arms, and tents , digging shelters in the snow and earth, providing medical assistance and rescue in the field, taking away weapons, ambushes and surprise attacks, actions in the mountains, in the forest, in the water, in the snow. Plus landing training. Ski training is carried out in the northeastern provinces of China in all weather conditions, including at air temperature below 40C. Guided terrain with or without a compass, reading a map.
It is hard to believe, but survival training is also provided (rhythm of breathing and body movement) in water with hands and legs tied! (how much it is necessary to be in the water and why it is not indicated; as far as I understand, this should apply to the Night Tiger, Sharp Sword of Southern China and Sokol units, at least considering their area of ​​responsibility). 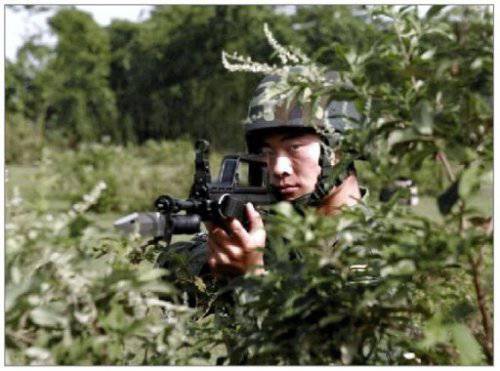 Survival skills training (using the example of the Falcon division)
A group of 6 people. Equipment: army boots, a knife, a lightweight machine gun and a helmet. With a fighter can take 1 kg of rice, 5 pieces of pressed biscuits, salt and matches. Before leaving, the group is thoroughly searched, literally shaking out the pockets - no unnecessary unwanted items, including and money and water should not be (though in some sources they write that they give out a flask of water, 2 a piece of biscuit, but without rice) ..
March-March conditions: for 7 days, the group must pass through the virgin forest more than 200 km (according to other sources - 300 km), and part of the route (about 3 days of travel) runs through mountainous areas with altitude above sea level in 2700 m. The area is that most water sources are unsuitable for drinking or simply life-threatening, the fighters must determine from the traces of birds and animals those reservoirs that are suitable for use, or use trees and plants to produce water. An additional difficulty is created by the fact that, despite the heat, clothing must be tightly buttoned, as the area is full of poisonous snakes and insects. The mountain section of the route (about 3 days of travel) is so poor in terms of plant and animal life, that the group will have to be content with ants, mice and snakes. In addition, along the way, the group must complete training tasks around 20 (assaults, captures of 'tongues', bypassing outposts and ambushes of a conditional opponent, etc.).
Such training can take place from 3 to 6 months per year. 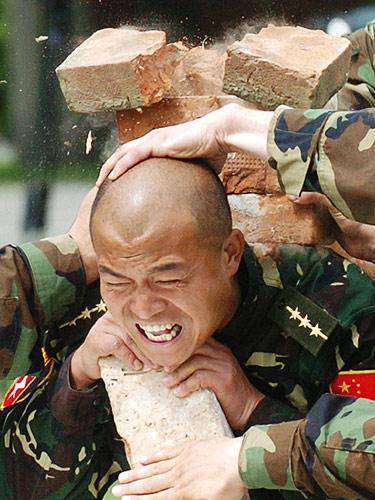 Physical training:
This part of the preparation is affectionately called ... 'descent into hell'.
Lifting in 4: 30. Common 'hard' qigong. Dantian Qigong - 30 min. In 6: 00 climbing a mountain or running long distances. When running, each fighter collects 10 bricks into his backpack. The distance in 5 km must be covered in no more than 25 minutes. The same cross - in the evening. What happens in this case with the back, or rather, the skin on the back, is not difficult to guess. After the run, the exercise 'iron palm' begins. The fighter must strike the bag with 300, and in just the initial preparation cycle, 15000 strikes, first with beans, and then with iron filings. Gradually, the 2 / 3 palm length will become covered with stone-hard calluses, and the palm thickness will increase by almost 100%. Bleeding and wounds are healed by soaking hands in a special treatment solution. Fists, elbows, knees and feet are worked out in exactly the same way and with the same standards.
After breakfast, working out the breaking of the head of the wooden bars begins. Begin with soft and finish with hard rocks. When a corn with a thickness of 2 mm is formed on the head, it is possible to proceed to breaking up the bottles and bricks. Having undergone proper training, a fighter can strike a tree or a wall (this is hard to believe, or an error in the sources, but the standard is 500 once a day). Headstand - 30 minutes a day ..
Then lunch, a short rest and hell continues ... 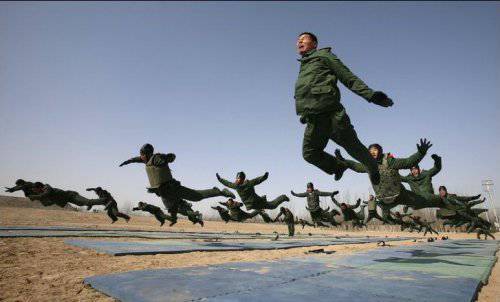 Several standards ...
Climbing the brick wall of a building to the 5 floor without any available means in 30 seconds.
With full equipment, incl. with 4-mi grenades and a machine gun, with a total weight of 10 kg, swim 5 km in 1 an hour 20 minutes.
With tied legs, with 4-mi hand grenades on the belt and other equipment, with a total weight of 4.5 kg, jump in the bag 10 km.
With full equipment in the rain on a broken mountain road (or rather, on clay), for 12 minutes to overcome the distance 3300 m (score - 'satisfactory'), 3400 m (score - 'good'), 3500 m (score 'excellent')
Lifting on the crossbar and pushing up on parallel bars - each 200 exercise once a day.
Passing an 400-meter obstacle course with 14 targets in a group of 4-s people twice. The first - to warm up, the second - for a while - no more than 1 minutes 45 seconds.
Stop lying in front - 100 times, no more than 60 seconds.
Lifting dumbbells weighing 35 kg - 60 times, no more than 60 seconds.
Throwing grenades - 100 times at a distance of at least 50 m.
The defeat of a human target from a distance in 200 m from a car moving at speed 50 km.
Throw a grenade into the car window from a distance of 30 m. 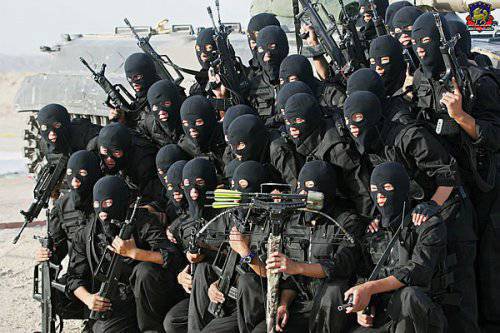 Professional training:
Sabotage and subversive training, training in working with explosives substances (understanding the types and characteristics of explosives, methods of installation and neutralization, assessment of the optimal installation site). Wiring, signals. Penetration into a given place in masking gear, as well as in water - using inflatable boats or logs, empty barrels as masking means. Diving skills.
Depending on the role of a subdivision, emphasis is placed on actions in urban environments, subversive and subversive work, foreign languages, computers and communications, operations in the (sub) aquatic environment. 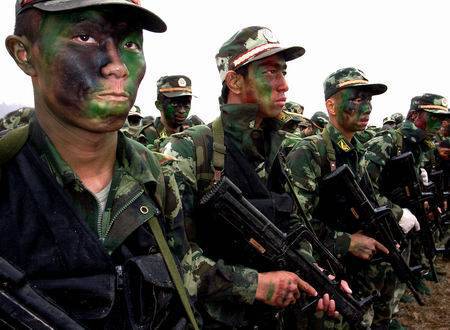 Participation in combat operations and competitions:
Starting in 1998, the Chinese special forces have received invitations to the ERNA international special forces competitions held in Estonia. By participating in competitions for the first time, the Chinese special forces received 20 in the first place in the 8 program, one second, and the third 4. Having taken place in the overall standings 3.
Later, the Chinese team received the prize 'The Best Foreign Team' - the Karev Prize (for the accuracy of the transcription of the names of this Estonian 'hero', according to Chinese sources, I can not vouch).
According to indirect data, the Sokol units in the number of 32 people were sent to help the security forces of the Afghan government to release the Chinese workers taken hostage. fight against terrorist formations. The Islamabad Times newspaper claimed (according to the Internet) that Chinese special forces released the hostages at night without a single shot and detained the terrorists who held them to 21, which was given the highest rating by US intelligence in Afghanistan.
Ctrl Enter
Noticed oshЫbku Highlight text and press. Ctrl + Enter
Military Reviewin Yandex News
Military Reviewin Yandex Zen
26 comments
Ad