What documentation will Ukraine still sell?

October 8 2014
69
Less than a year ago, when the implications for the Ukrainian aviation industry of the signing of an association agreement between Ukraine and the EU were analyzed, a very unfortunate prospect emerged for the country's only aviation science and technology complex. However, today the situation was somewhat different than we saw it: Ukraine was stirred up by a neo-Nazi coup d'etat, which soon grew into a full-scale war in the Donbass, another “gas war” broke out, and the economy finally went into a tailspin. 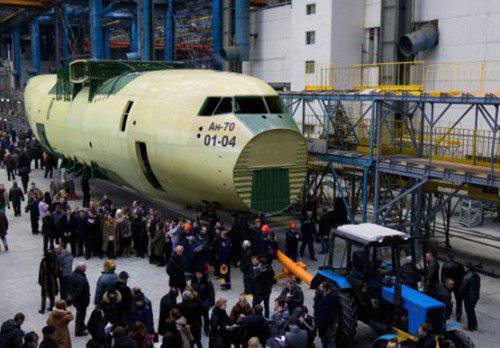 An analysis of the state of affairs in the Ukrainian aviation industry showed that when signing an agreement with the EU and the destruction of cooperative ties with Russia, ANTK im. Antonova will not be able to produce new aircraft. According to Dmitry Kiva, General Designer of Antonov Group of Companies, the enterprise does not have a single project, the share of Russia in which would be less than 50%. In particular, 148 enterprises of Russia take part in the production of the An-126, at which more than 60% of aircraft components are manufactured. The share of Russian products in the final cost of the An-140, which 100 Russian plants are working on, is about 70%. Attempts to cooperate with Americans and Europeans ended in complete collapse: as the then Prime Minister Mykola Azarov said, “I had a meeting with the French leadership and the leadership aviation "Airbus, and they told me that your plane (An-70) is better than ours, but we will do everything so that your plane does not find a market."

The fact is that shortly before this, Antonov was simply besieged by Airbus representatives on the joint production of the A400 transport plane, up to promises to provide the possibility of making parts and assemblies of the aircraft in Ukraine. It all ended with the fact that the Europeans, having received from the Antonov State Enterprise their unique technical documentation, after some time produced their own aircraft, suspiciously similar to the Ukrainian prototype. Naturally, without the participation of the Ukrainian side.

Of course, such durability of this aircraft speaks about the genius of the decisions incorporated in its design, and it’s not shameful to make money on its repairs and upgrades. Moreover, the aircraft is massively used and will be used in two dozen countries.

But the current Ukrainian realities have made their adjustments in this perspective. October 2 TASS agency published a message that the Department of Aviation Industry Ministry of Industry and Trade of Russia could not buy from the ASTC. Antonov working design documentation for the An-2, necessary for the serial replacement of these aircraft engines for engines of new development. As it turned out, the owner of this documentation is now the military unit of the European aviation giant Airbus Military, in whose hands it fell through Polish intermediaries.

However, this is not about Russia, which will still buy this documentation and Annushki will carry out the planned mass remotorization. It's about Ukraine, from now on forced to purchase its own documentation from foreigners. For example, to fulfill the contract for the modernization of 140 An-2 with the Cuban Aviation Corporation, concluded in September 2013 year and calculated for the sum of 3-4 billion dollars.

Of course, the fact of the sale of copyright on their own design documentation to competitors, who have already proved their dishonesty, could raise many questions about the sanity of the people who made decisions about it.

If it were not about Ukraine, after the February coup d'état that faced Europe and the United States, especially in a pose of which it deigns, sir. Although in previous years, the country's leadership sold to the left and to the right the secrets that belonged not only to her alone, but also to other states of the former USSR.

Everyone remembers the case of the sale by Ukraine of the Russian-made Su-33 Russian-designed fighter design fighters after gaining independence for China. It is thanks to this that the PRC soon, without acquiring a license from Russia, established its own production of this type of weapon. The shipbuilders of Nikolaev, fulfilling the decision of the Ukrainian government, in the 1998 year, sold to China the unfinished Soviet-era heavy aircraft carrying cruiser Varyag, which in 2012 year became part of the PRC Navy as the first aircraft carrier. And as the deck aircraft on it under the name Shenyang J-15 used Su-33 Chinese production. Moreover, several other Chinese aircraft carriers are being built on the basis of the Varyag design.

In 1990-ies, the deputy head of the Security Service of Ukraine, Alexander Skipalsky, provided American specialists with documentation and the opportunity to freely investigate a unique structure, which experts from all over the Soviet Union worked on, - a radar station in Mukachevo. This cyclopean structure, stuffed with electronics, served for the early detection of missile strikes, made it possible to detect the launch of a ballistic missile and calculate its trajectory not only in Europe, but also in the northern part of the Atlantic Ocean. This greatly helped the United States in developing its own missile defense systems and solving the problems of overcoming Russian missile defense.

The industrial cooperation of the Soviet defense industry provided for the participation of dozens and hundreds of enterprises of the entire USSR in the implementation of the production of weapons. At the same time, willy-nilly, the accessory companies became owners of each other’s secrets and technologies, and their cooperation ties were maintained even after the collapse of the Soviet Union. For example, until the last days, the Dnepropetrovsk Yuzhnoye design bureau participated in many Russian missile programs, the Motor Sich's Zaporozhye PO supplied the Russian Air Force with aircraft and helicopter engines. GAHK "Dneprovsky Machine-Building Plant" once participated in the creation and production of anti-aircraft missile systems C-300. Ukrainian enterprises were involved in the production and modernization of Buk-М1, С-300 and air defense systems as a whole.

Of course, some of these developments have long been "gone" abroad. The brightest examples again lie in high-tech areas. The cooperation of Yuzhnoye Design Bureau and Yuzhmash Production Association with NASA on the Antares launch vehicle assumes the use of some technical solutions related to strategic missiles in service with the Russian Strategic Missile Forces. Joint developments on the program of equipping the newest corvette, designed by Ukraine, after the decision to attract European partners are not a secret to them. As well as information on developments in the field of hydroacoustics, transferred to the Germans as a contribution to joint development, quickly rolled up under US pressure.

After the pro-American political forces came to power in February 2014, signed and ratified the association agreement with the EU, the situation with the safety of confidential technical information in Ukraine simply got out of control. Firstly, the agreement with the European Union contains provisions on the adaptation and accession of Ukraine to the pan-European security system, which relies on NATO. Secondly, the decision of Arseniy Yatsenyuk, made back in the spring of 2014, about the presence of European “advisers” in each ministry, which even the deputy ministers are obliged to obey, allows the “advisers” to receive the necessary documentation without any particular hassle. Thirdly, according to information from employees of the Security Service of Ukraine, the Ukrainian counterintelligence, ensuring the preservation of secrets in the field of technology, today has become a branch of the CIA, whose agents practically manage all the steps of this special service. Fourthly, a political decision was made to draw closer to NATO, based on a joint approach with Russia to the North Atlantic alliance as the enemy No. 1. And, most importantly, according to reports of Ukrainian news agencies, the Cabinet, through its decision, opened access for NATO experts to Ukrainian secret objects and documentation, motivating this with an interest in foreign investment in the military-industrial complex.

One should not disregard the catastrophic situation of Ukrainian enterprises set by the new leadership of the country in a hopeless situation. The steps to completely break all ties with Russia led to the fact that these enterprises, primarily high-tech ones, are simply forced to sell their own and developments obtained through the industrial co-operation for a pittance to anyone who wants to buy them.

All this suggests that the former partners of Ukraine in the near future are waiting for a lot of "wonderful discoveries" in the form of unexpected owners of technical documentation, and in the form of someone's sudden technological leaps based on technical solutions previously provided for familiarization to Ukrainian specialists-accessory companies. Well, in the field of defense industry, the price of Ukrainian openness to partners from the United States and NATO is altogether difficult to overestimate.