“If people have weapons, they will be more reckoned with” 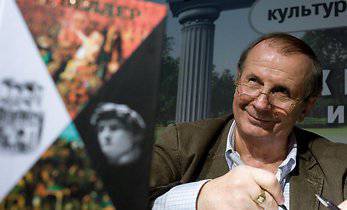 We continue to interview well-known people of our country on the issue of allowing citizens to keep and wear short-barreled weapon.

Today, the questions of KM.RU are answered by the writer Mikhail Veller.

- Opponents of a short-barrel say that if a weapon is allowed, it can be used to make revolutions, as it was already in stories Russia. What do you say to that?

- The February 1917 revolution of the year was not an armed uprising. It was a palace plot in which the top Russian generals and the top of the royal family participated. It had nothing to do with possession of weapons by the public. As for the October coup, all the people were armed because of Russia's participation in the Great War, later called the First World War.

Any man in a soldier’s or sailor’s uniform had a rifle, so a civil war could arise. But the self-defense weapon, which was in free sale, was very expensive for the broad masses, it was suitable only for shootouts at short distances and only small groups of militants were armed with them, who could not make a revolution.

- You have forgotten the first revolution, that is, the 1905-07 terrorist war.

- I beg your pardon, I have not forgotten anything. You are the first from whom I hear the 1905 uprising called the terrorist war. In the 1905 revolution, armed squads really participated in both Moscow and St. Petersburg, and the uprising was easily suppressed. If we talk about terror, it is in terms of the number of victims and is not closely comparable with the wave of murders that occurred in Russia in the 90s, and even today in large cities every day people are killed during the day.

Let me remind you that the first twelve years of the 20th century in Russia were a time of mass peasant revolts. The peasants had no weapons, except for pitchforks and braids. With these pitchforks and scythes they perekalyvali and cut out landlord families, burned estates. Then the troops came, shot the instigators, and then the military field courts hung up those instigators who remained alive. Peasant uprisings had no relation to the sale of weapons to the population.

- When did the government change its approach to civilian weapons?

- Following the October Revolution in early November 1917 in the old style, the young government headed by the Bolshevik Party categorically forbade the people to keep and bear arms. This was done in order to prevent any resistance to oneself. As a result, a totalitarian regime was built, with no precedent in the history of the suppression of the individual. If the people have weapons, they will be more reckoned with.