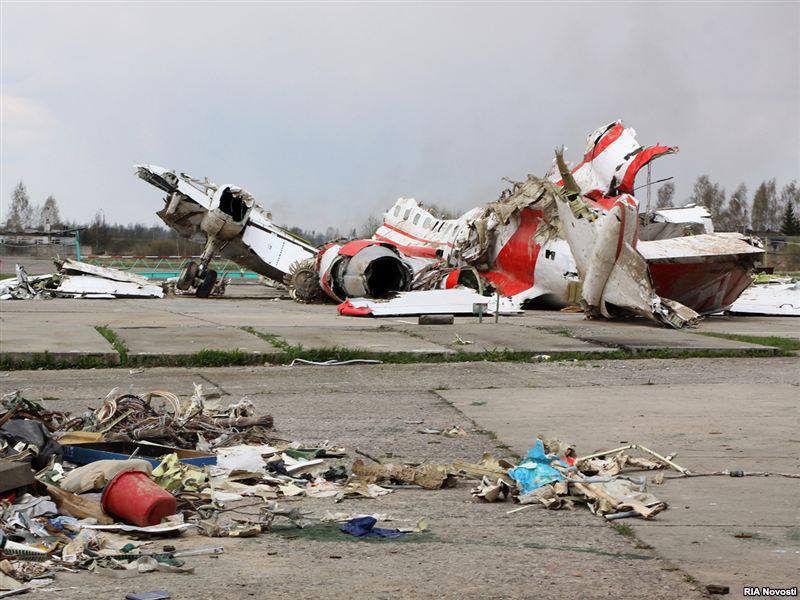 The Polish government commission published its own conclusions regarding the reasons that led to the crash of the Tu-154M aircraft near Russian Smolensk. Reports made by Interstate aviation Committee (IAC) and the Polish Commission, on the causes of the crash near Smolensk, in general, agree. The immediate cause of the fall of the airliner, on which the Polish leadership was located, is the fact that the pilots, learning about the weather conditions, did not make the right decision to leave for the reserve airfield.

From the technical point of view, the report of the Polish Commission for IAC specialists on the reasons that led to the collapse of the presidential Tu-154 was of little interest. Experts did not see anything new there compared to the report of the committee itself, which was published 12 on January 2011, and according to which the immediate cause of the crash was the decision of the airliner’s crew not to go to the reserve airfield, and in crew training.

Recall the aircraft of the President of Poland Lech Kaczynski Tu-154M crashed while performing a landing maneuver at the military airfield North near Smolensk in the early morning of April 10 on the 2010. During the landing, he caught the tops of the trees - due to the dense fog was extremely poor visibility. On board the airliner were 96 people, of which 88 passengers (president and members of the government delegation) and 8 crew members. No one survived.

According to the experts of the IAC, the crew of the aircraft should have taken into account the received message about adverse climatic conditions. According to the head of the IAC, Tatyana Anodina, the pilots, despite receiving warnings about the non-compliance of meteorological conditions at the final destination aerodrome, did not make the right decision to leave for the reserve aerodrome, which was proposed as an alternative landing site. At the same time, according to the clarification of the Minister of Transport of the Russian Federation Igor Levitin, the Russian air traffic controllers did not have the right to prohibit the special board to land - to decide whether to land at this airfield or go to the proposed reserve, the airborne commander had to do.

Also, as the head of the IAC, the airliner crew was not sufficiently prepared, given the importance of flight. According to T. Anodina, the departure was made without the pilots having data on actual as well as predicted meteorological conditions at the destination airport and up-to-date aeronautical information.

At a certain stage of landing, the chances of avoiding a collapse became almost zero, IKA is sure. Alexey Morozov, the head of the technical committee of the IAC, said the following: “The maneuver to prevent a collision with a ground obstacle was undertaken by the pilots at the last moment. The maneuver was very steep, and on the record made by the flight recorder, it was recorded that by the time before the collision with the birch, the plane was behind the operational angle of attack. If it were possible to avoid a collision with a birch, then, probably, in literally two or three seconds, the airliner would enter a dangerous mode, called a stall, followed by a collision with the surface of the earth. ”

Plus, as was established during the investigation, at the time of the landing maneuver, Andrzej Blasik, commander of the Polish Air Force, was in the service cabin. According to the conclusions made by the experts, his presence could well put pressure on the crew members and influence their decision to land the plane in Smolensk at any price, ignoring the warnings of air traffic controllers.

The report presented by the Interstate Aviation Committee in Poland was received with different moods. For example, the brother of the president who was killed in the crash, Yaroslav Kaczynski, speaking at a meeting of the Sejm, said: "The immediate causes of the tragedy are entirely on the Russian side." The opposition tried to use the terrible tragedy at Smolensk for their own purposes. It all looked so shameless that the country's prime minister, Donald Tusk, was even forced to call on the common sense of some deputies and politicians who spoke out with anti-Russian rhetoric, saying: “Clarifying the truth about the causes of the catastrophe cannot be a justified reason for various political adventures ".

At the same time, experts, including Polish experts, agreed that the investigation carried out by the IAC was conducted extremely competently and resolved all the questions that arose about the reasons for the terrible tragedy near Smolensk.

“The mistakes of the crew members are the main cause of the plane crash,” said Michal Fizer, a Polish military expert. - Lack of experience in such flights is one thing, and completely different is life experience. When you 35, you do not have the necessary life experience, but there are many ambitions. You are trying to fulfill the task, because you know that the president expects you to put the plane in the indicated place. And you are trying to prove to him that you are capable of doing this. ”

The culprits will be called later

The Poles completed their own investigation in February. A report on its results was transmitted to Prime Minister Donald Tusk at the end of June. Then the official document was translated into English and Russian. A week ago, Tusk demanded that the available material be made public no later than 29 July. There were some disagreements among the commission members: the military did not want to put the blame on their colleagues, civilians, direct participants in the work on the published report, were inclined to think about the obvious guilt of the Polish Defense Ministry, manifested in the irresponsible preparation for the president's flight. But at the moment it was possible to come to a common denominator: the signatures of the scandalous document were put by all those participating in the work.

In the document there is no single name of the specific culprits of the disaster. The head of the commission, the head of the Ministry of Internal Affairs of Poland, Jerzy Miller, stated that the definition of specific culprits was not the task of his commission. The investigation of the circumstances of the catastrophe is continued by a commission created by the Supreme Chamber of Control of Poland, as well as by the State Prosecutor’s Office. At the end of its own investigation, it is the prosecutor’s office that will charge the specific perpetrators of the crash of a presidential airliner. But the end date of the investigation has not yet been determined.

We are in Yandex Zen
Conveyor conveyor
Oleg Valetsky about the wars in the Balkans, their causes and Russian volunteers
12 comments
Information
Dear reader, to leave comments on the publication, you must to register.