30 September 2014
13
As already reported "Evening Politruk”The drops of truth about the former Ukraine that are leaking to Europe cannot but sharpen the stone of indifference created by censorship.

In the forefront, of course, the Germans. Because of their fame, the tragedy of fascism (it is really being studied in schools; Germany made conclusions, repeating “Never More” with Jews, and having made conclusions, the Germans follow them), German citizens have a better idea of ​​what Ukraine faced. 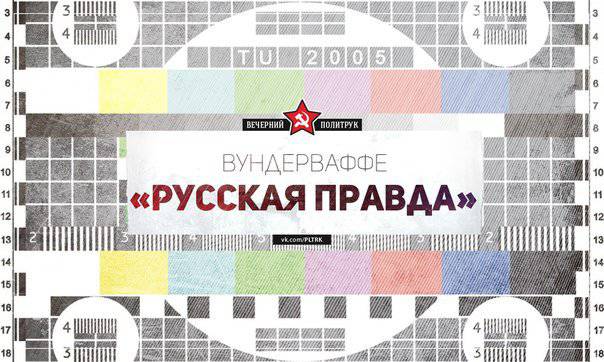 For a relatively short time, the “spectrum of signals” from the Ukraine was pro-American authorities successfully succeeded in jamming. This is no longer the case. Moreover, censorship, revealing itself raises scandals.

This is to the domestic "kreaklam" marching to Europe with a march of the world with Bandera banners, in general, it is normal when the editorial policy looks like that:

“But what about the facts? We visited the editorial office of one of the most moderate sites. Type of people from Lugansk in Kiev do, some former left there participate. They are type against torture, kidnapping, etc. But on the wall hangs a large Whatman sheet on which the goals and principles of editorial policy are written. The first among them is “Creating an atmosphere conducive to the conduct of ATO”. Ie to kindle war. Based on this, the facts are selected for publication. Everything that corresponds to such an “atmosphere” is published without verification of authenticity. What is not - just not published. About the box, I do not say.

Unlike the post-Soviet homegrown, real Europeans do not accept open and explicit brainwashing. And when they manage to notice him, “wartime excuses” are not invented for him.

Here is what, for example, the German comedians from the ZDF channel, the “second button” of German television, say about “military censorship”: => http://youtu.be/1gya2wUD_I0

Notice the official ARD accusation paper that humorists are talking about. He is not an anthropic fabrication. In the large German mass media the “censorship” scandal is really burning.

During the week, the Supervisory Board of the television and radio corporation ARD subjected to unprecedented criticism the coverage of the crisis in Ukraine in the programs of this largest media holding. “Fragmentary,” “tendentious,” “unsatisfactory,” “one-sided,” members of the council awarded the work of the corporation's journalists with such epithets.

Television ARD - the "first button" of Germany. In addition to the main round-the-clock program, broadcasts created in each of the 16 federal states in the broadcasting grid. Total 17 channels. They have a common information policy. Regional programs necessarily broadcast “central” reports News and politics shows. ARD correspondents abroad give all 16 lands a single picture of international events. This is monitored by the Supervisory Board (Programmbeirat). Its task is to protect the interests of viewers and listeners. Usually, board meetings are held formally. But the last time was an exception. Experts literally defeated the ARD program.

At the insistent requests of German TV viewers who feel that the media is preparing them for war with Russia, and not wanting to incite the country in this insane adventure, this Supervisory Board considered it their duty to monitor the work of ARD on topics related to the Crimea and Ukraine. The results of the check worried Programmbeirat members even more. They met with representatives of the audience. Many citizens described the coverage of Ukrainian events by ARD journalists as “naive, one-sided and dangerous”.

The resolution adopted by the ARD Supervisory Board unanimously contains harsh language.

ARD reports could have caused an impression of "bias" and were "initially directed against Russia and the Russian position." Important aspects of the conflict “were not reflected in the ARD materials”. The case of manipulation is described in detail in the main evening news release of ARD television. Correspondent Christian Neef, who connected from Ukraine, was asked: “Do the residents of Donetsk want the government troops to release them?” Neef replied: “I don’t think because the local people are very skeptical about Kiev.” The interview went under the record. In the air this place is cut out. But they left the opinion of Neef that the residents of Donetsk seemed to be less supportive of the rebels.

In a resolution adopted unanimously, members of the Supervisory Board 9 recommend that producers and editors work "more thoroughly" and more carefully prepare materials. Leading politicians of the ruling coalition and the main electronic media about the criticism of the ARD, were silent.

But about her in detail told on the Internet. The leaders of the two leading opposition parties - the “Left” and “Alternative for Germany” - supported the position expressed by members of the Supervisory Board. “It was confirmed that it was already clear for months: ARD broadcasts one-sidedly and tendentiously, taking an anti-Russian position in the Ukrainian conflict. Germany's largest media corporation violates its information duty and willingly turns into an improvised political interest. This is unacceptable, ”said one of the leaders of the“ Left ”, Sarah Wagenknecht, for example.

(Comrade Sarah, a Komsomol member, activist, beauty, readers of the Vecherniy Politruk may remember her brilliant and convincing speeches in the Bundestag, which we have already reported => https://vk.com/wall-64599002_4213)

From the first days after the Odessa conflagration Pltrk argues that the breakthrough of the information blockade and work with public opinion in Europe is the most important component of the strategy of the Russian state and civil society in Ukraine.

The world should know about the tragedy of Odessa, ATO war crimes, facts indicating Kolomoisky’s involvement in the shooting down of a “Boeing”, and finally, about the mass graves of women who were raped by the National Guard under Donetsk.

Mirror neurons (the brain system responsible for hominid sympathy and compassion) in European brains work just like ours. It is only necessary to slip them under their nose more often from what, once they have seen, you cannot just turn away.

Sympathy and compassion for the victims, anger for those who sow lies, evil and violence, and a pragmatic understanding that they will have to fight with those legendary Russians - this is what can actually overcome sanctions and prevent the threat of a new Cold War in Europe.

Of course, Russia has the ability to defend its interests and values. Your way of life, your history, their beliefs and allies. All that we call the "Russian World", we have the right to protect - by force weapons, skill and unity.

But the main Russian Victory is always in Truth. Truth is the best way to overcome evil, make friends and influence people. Indeed the Russian way.

To master it perfectly is the task.