Lone terrorists can be the main threat to the world 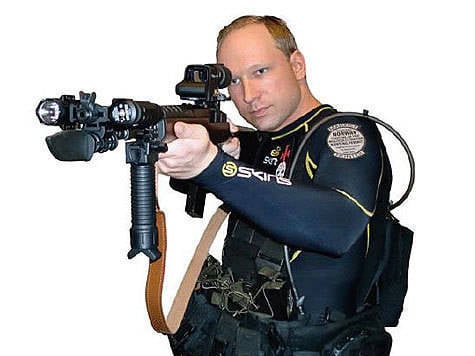 While the Norwegian police officers interrogate Anders Bering Breivik, the criminal who surrendered to the authorities, realizing that he was surrounded and any resistance was useless, the international media are trying to find an answer to the question “What is the reason?”. How can one explain that after the explosions in the capital of the state, the security forces were completely unprepared for the second and more terrible act of the tragedy that led to the death of 76 civilians?


Many experts are confident that today Europe is faced with a completely new and extremely dangerous phenomenon, when it is not a foreign group or an Islamist organization that operates on such a scale, but “its own home-grown” lone terrorist. It is obvious that now both Norwegians and the rest of Europeans need to change their stereotypes about the real terrorist threat, as well as about who it represents. After all, today's tragedy in Norway is no precedent: similar stories occurred before.

The terrible terrorist attacks in Norway mercilessly destroyed the sense of the security of peace and tranquility that is customary for this Scandinavian state. Anders Breivik was able to plunge into a real shock not only his own state, but also the rest of the world. With his inhuman act, he made all sensible people think that today terrorism is not exclusively the prerogative of Islamic radicals and extremist groups. Until the last moment, the Norwegian special services believed that representatives of Islamic fundamentalists were involved in the terrorist attacks in the capital. When the explosions thundered, the terrorist group "Ansar al-Jihad al-Alami" hastily announced that the responsibility for their actions lies with its representatives. However, representatives of the Norwegian police and special forces were caught unawares by an unexpected attack by Brevig against a youth camp located on the island of Uteia.

The official representative of the Norwegian police, Anstein Gyengedal, said: “Now all the facts indicate that Breivig acted alone, we don’t have any other information indicating the presence of accomplices. Naturally, we continue to investigate, we are checking people who cause the slightest suspicion. Today we have several addresses under our control, which we keep under constant surveillance. We immediately connect all incoming information to those we already have, but for the time being we are practically eski do not doubt the fact that Breivig was alone. "

For almost 20 years, Anders Behring Brave nurtured the idea of ​​a “revolution” that would shake the Western world and thus marked the beginning of an entirely new era in which there is no place for “Marxists” and “Islamists.” At first glance, it’s not realistic to call Breivig, with his incomprehensible theories of social order, completely sane. At the same time, the lone terrorist, whom in the Western media has already been dubbed a Christian fundamentalist, committed his crime in cold blood and prudently. Unlike other criminals with impaired psyche, who, as a rule, committed suicide after killing several dozen people, Anders Breivig did not want to die. At the right moment, he threw his weapon on the ground, thus showing that he surrenders to the authorities. Recall that currently there is no death penalty in Norway, and the maximum term of imprisonment is 21 a year.

The term "homegrown terrorism" first appeared four years after the terrorist attack on the World Trade Center in New York on September 11 of the year 2001. It began to be used quite extensively after the July 7 2005 of the year thundered explosions in the London subway. Then more than 700 people were injured of varying severity, and 56 people died. These attacks were carried out by Muslims living in Britain, and not arriving in the country from abroad. The peculiarity of “home-grown terrorism” lies in the fact that its main ideologues and militants-performers are not outsiders in the state, but local residents, perfectly integrated into society.

It is necessary to recognize that loners are more dangerous: they, like serial killers, are quite difficult to calculate. The most famous example is Ted Kaczynski, a resident of the United States, who became known under the loud nickname Unabomber. During the period from 1978 to 1995, a graduate of Harvard University sent 16 hell machines by regular mail; the recipients of the parcels were American airlines and universities. As a result of this action, three people died, more than two dozen innocent citizens were injured. Later, Ted Kaczynski prepared his own Manifesto and demanded to be published in the press. He made an attempt to explain that with the help of explosions, he wanted to draw special attention to the process of a person losing his freedom, and pointed out modern technologies as the main culprit. To some extent, Anders Breivik followed in the footsteps of the Unabomber, as the Norwegian manifesto, which was posted on the Internet, repeats unchanged fragments from the text of Ted Kaczynski.

Today's extremism has no religion and nationality, and the Europeans will have to give an adequate response to the next challenge. Now in the same affected Norway, as well as Sweden and Denmark, obviously, there will be trends in the appearance of such scumbags. These terrorists live in their own state, and neither the closure of the borders of the castle, nor the attempts to fight terrorist organizations in Afghanistan, nor the physical elimination of terrorist leaders in the territories of Somalia, Pakistan, Yemen or Palestine, can help here.

Norway is one of the most active participants in NATO's counterterrorism operations all over the world, but such a struggle could not ensure internal security. The terrorist attack in Norway, about which the country's prime minister, Jens Stoltenberg, spoke of as the most monstrous crime since the end of the Second World War, provides food for reflection on the vulnerability of a civilized international society with its democratic soft laws to the real threat of terror. The authorities and law enforcement agencies of the state literally overslept the deadly threat, believing that the main danger for Norway comes from Islamic fundamentalists.

We are in Yandex Zen
What you didn't want to know about England
Tom Christiansen: "Russians are ruining us; they are depriving us of the means for subsistence": Russian-Norwegian relations in the High North to 1820.
5 comments
Information
Dear reader, to leave comments on the publication, you must to register.