Elena Bondarenko: Maidan spawned the most basest qualities in people 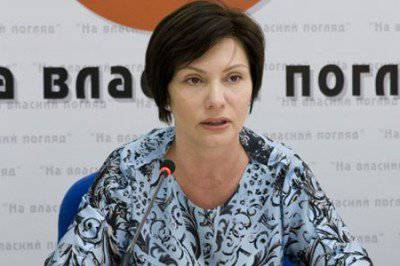 Verkhovna Rada deputy Elena Bondarenko commented on her recent open letter to “Anti-Fascist”, in which she appealed to international organizations to pay attention to the opposition being harassed in present-day Ukraine and the attacks on regional deputies.

As you know, the Minister of Internal Affairs Avakov, not hesitating, said that when Bondarenko comes out to the parliamentary rostrum, his hand reaches for the pistol itself.

What prompted you to make a statement, and why did you make one? But what about other regional deputies and other representatives of the opposition? Are they intimidated?

First, not one. It’s just that the media and human rights activists are such that they don’t see the opposition’s persecution. The party made its angry statement. It is on the site. My colleagues turned to the General Prosecutor’s Office with a statement about the threats. But who cares if some journalists are simply intimidated by attacks, searches, pogroms and threats, while the latter, under the flags of the pro-government parties and blocs, join the parliament in these elections in friendly lines?

But after all, political talk shows remained in Ukraine? You can express your position there ...

You will be surprised. If earlier I was simply torn to pieces among themselves all the talk shows of the country, went to all sorts of tricks in order to lure it into its ether, now it’s silent. Since February. In informal conversations, the guest editors of these talk shows bashfully admit that they have a ban on the names of the most prominent and convincing oppositionists, on the best speakers from the Party of Regions. Since the seizure of power in the country by the current clique, I have not taken part in any talk shows in the country. Moreover, even comments in news stories are afraid to take. They know that censorship will cut everything out.

Can you explain where the popularity of the war party in Ukraine comes from? Is there a peace party? After all, the whole Ukrainian people cannot become so bloodthirsty in a matter of months.

The party of the world is destroyed. They shut up their mouths. They pursue not only the politician himself, but even the children politician. As it was with the son of my colleague Vladimir Oleynik. His son worked as a district prosecutor. Young guy, and thirty not. The militant gangsters just arrived at his workplace, beat him half to death, took him away in an unknown direction, and when he began to lose consciousness in their car, they threw him out on the threshold of the local hospital, fearing that he would die. All characters are known. But the government did not lift a finger to punish them. Moreover, as soon as the beaten prosecutor left the hospital, the Attorney General himself dismissed him. To another colleague from Kharkov, hundreds of maydanovtsy burst into the house in the evening. weaponsthey began to bully him in the presence of his wife and little grandson. The third colleague in Kiev just robbed the apartment, carried everything up to the curtains and his personal linen. Fourth in Dnipropetrovsk burned the house. Violence and impunity on the Maidan and gave rise to all these crimes and bloodthirstiness. In people with amazing speed, the most base qualities appeared. And this is against the background of the complete demoralization of the law enforcement system. And Maidan had a hand in this. The policeman in Ukraine is almost an enemy of the people. The mass media that belong to the oligarchs who profit from the war, moreover, make opposition politicians almost demons.

There is no desire to leave the country? At least for a while, as some experts have already done, publicists. What makes you leave?

I will not answer this question. So as not to give food for thought to my enemies. Let them remain unaware of my plans.

You are the person who defended the population of the southeast. Do you consider for yourself in the future to participate in the political activities of the LPR and the DPR?

I am ready to be an ambassador of peace for those people who suffer from war. My poor homeland is bleeding. I can not be aloof. While I am personally helping three refugee families. A religious community also asked for help for children who go to school not in their home cities, but on the road. There are few opportunities, but even such participation for those who lost their home, property now means a lot. You refused to participate in this farce, which Poroshenko calls the elections to the Verkhovna Rada. What do you think will be glad in 5 weeks?

I was the first who refused to take part in the play called - early elections in Ukraine. Then my party went the same way - the Party of Regions. We were drawn into these elections, trying to justify and legitimize our actions with our participation by those who came to power through an armed coup. This is not an election. Elections, when 44 districts from 225 dropped out of the process, elections where the opposition is eliminated, and everyone else fears silently watching it, elections where armed gangs can freely come to the polling station or to the election commission meeting and demand to “draw” in the protocol their desired voting result is a sham, a fraud, a crime. Essentially, the early elections in Ukraine were initiated by Poroshenko in order to finally deal with the real, and not the tame opposition, depriving it of the right of parliamentary vote. This is the way for the final usurpation of power in the country by the national-socialist forces and oligarchs. It is a tool for the undivided control of our poor country by politicians-puppets, the threads from which are in the hands of the so-called world government, and simply speaking from world capital overseas. A naive Europe at this time is playing at different sanctions ... Alas, the European Union in the Ukrainian question not only lost its “democratic” face, but also “played” to the detriment of the entire European region and continent. He was simply “bred”, used. That is why many statements in support of the Kiev clique here are perceived in Ukraine simply as a bad and stupid anecdote.