The history of military helmets in Western Europe: from the early Middle Ages to the early Modern Age. Part II 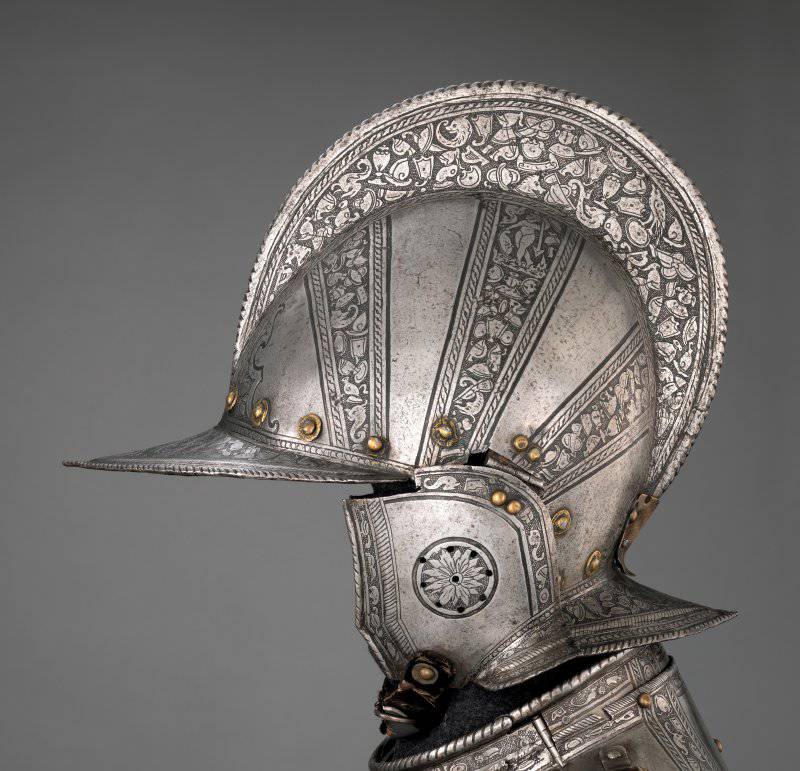 Burguignot, Burgundy helmet or sturmhube, from it. Sturmhaube - "assault helmet", first appeared in Burgundy in the first half of the XVI century. A helmet in the shape of a bowl with a plate collar neck and, as a rule, with a comb. It has a large number of varieties. There are open and closed. In any case, they have a movable top shield in the form of a visor, rising upwards, and the pull-outs that open to the sides, which are hinged to the helmet. If naushi with each other are not connected or are connected only by the chinstrap, then this is an open-type burginotte. 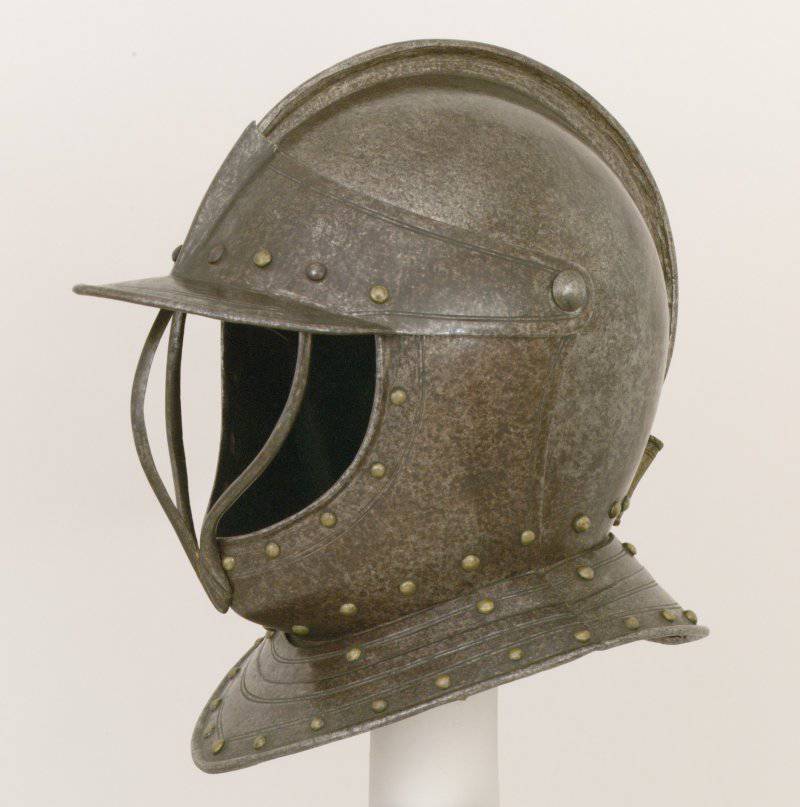 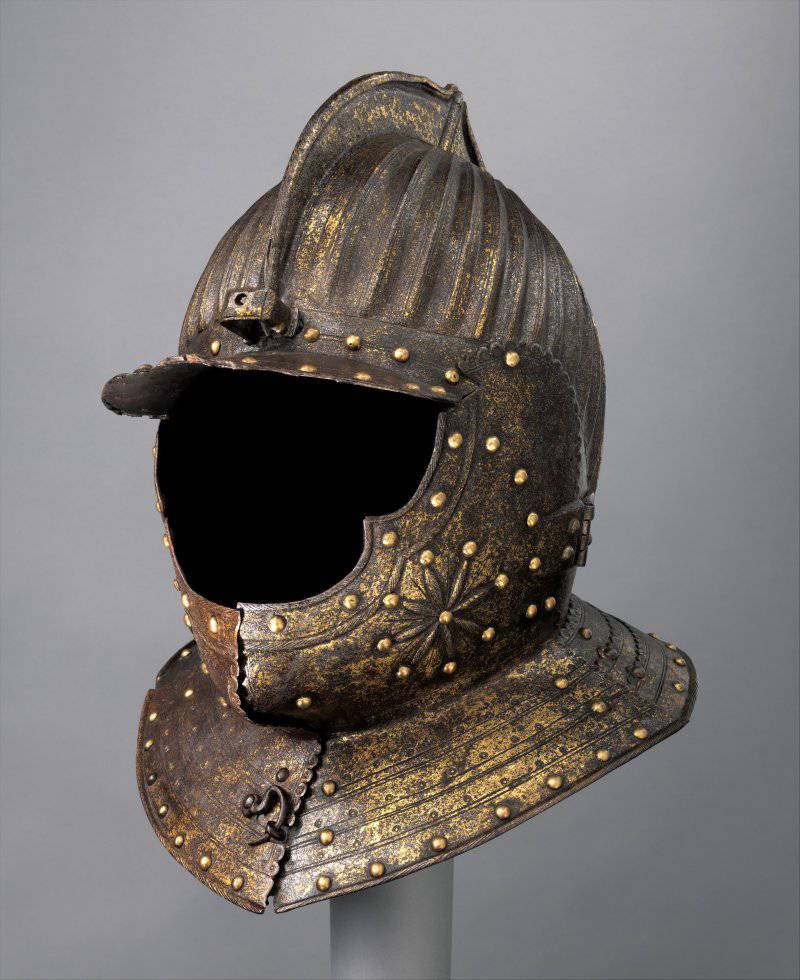 In the closed type, the nasi form a rigid structure and are joined together by a hook in front, forming a chin. They have a rounded shape and almost all have a thin comb of different heights. In the most protected version it can be supplemented with a folding downward head-piece instead of earpieces - falling buffe, forming a semblance of visor. 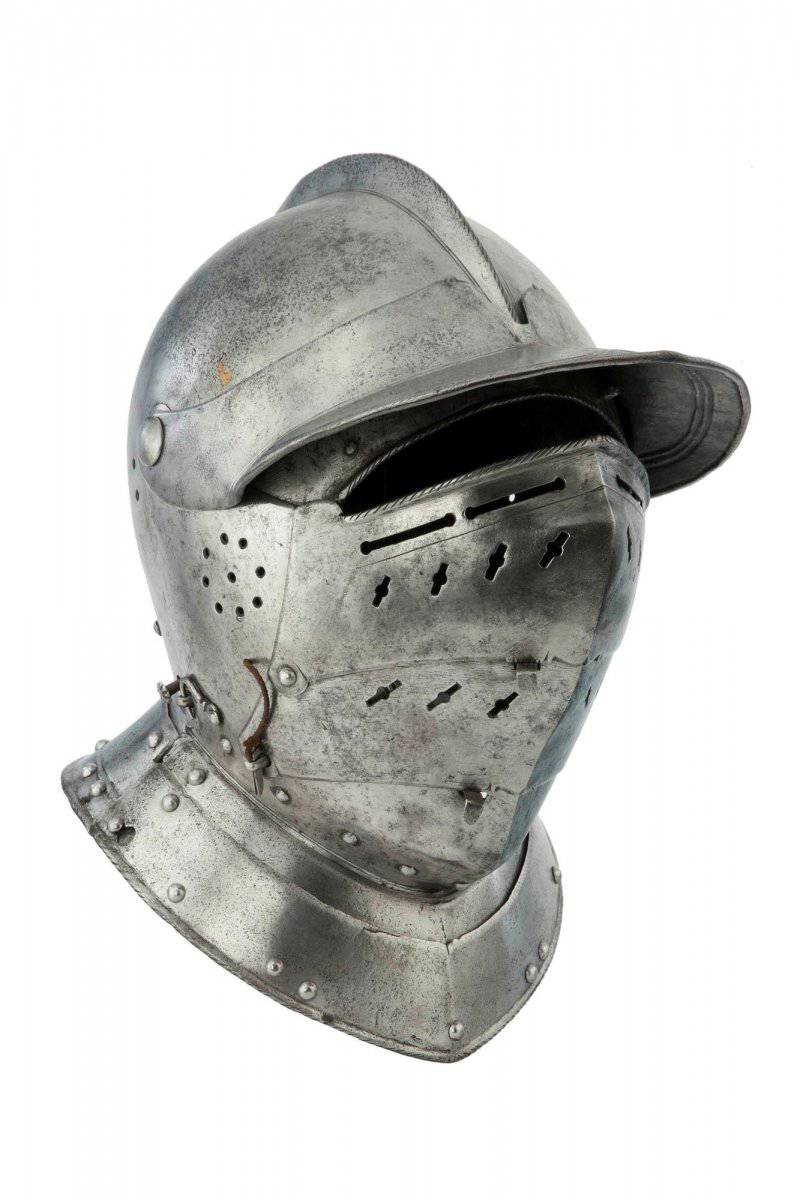 Fig. 27. Burginot with a folding head-collar of the Hungarian type. Germany. Around 1550 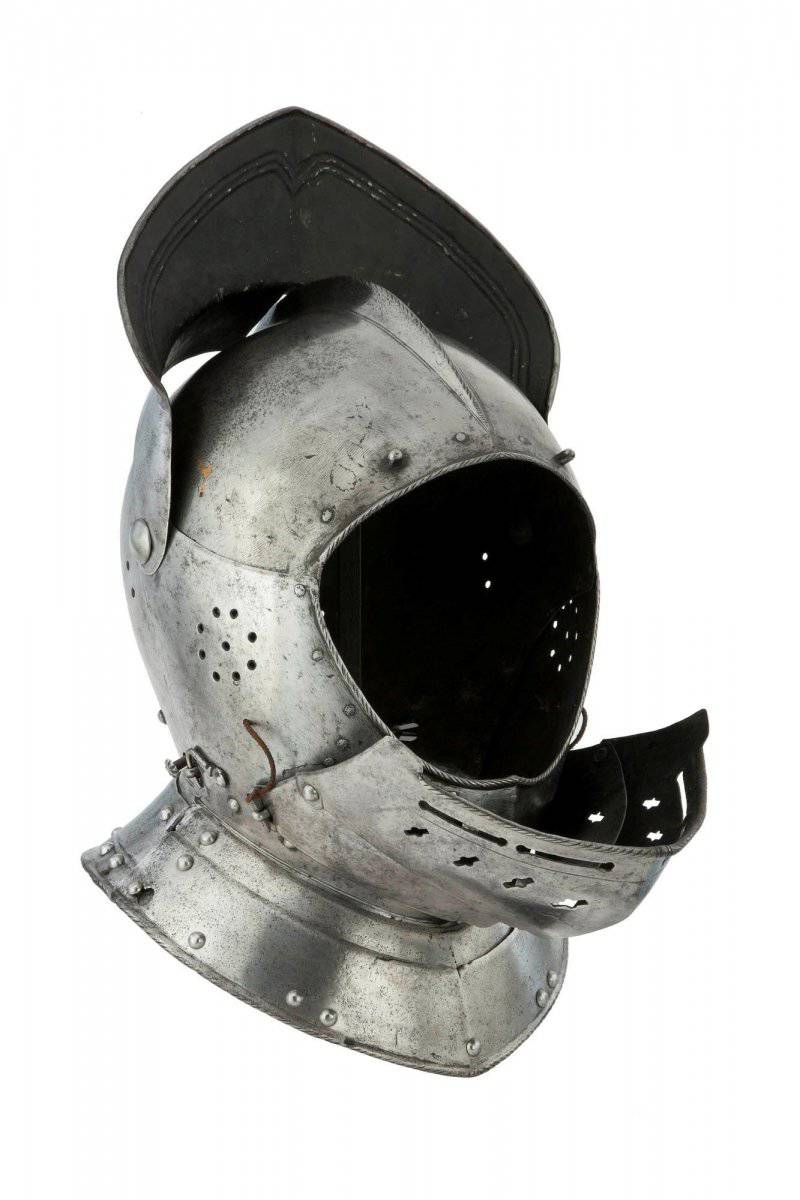 Fig. 28. Burginot with a raised visor and a lowered chin hung Hungarian type. Germany. Around 1550

Very comfortable wearing helmets that provide good protection. It was a combat helmet and was very actively used by cavalry, and less often by infantry. It has a unique Italian variety - a heavy assault helmet of Savoyard, the distinctive external feature of which is a grotesquely simplified likeness of a cheerful face with a grinning mouth (in detail here: http://topwar.ru/45672-savoyyar.html). 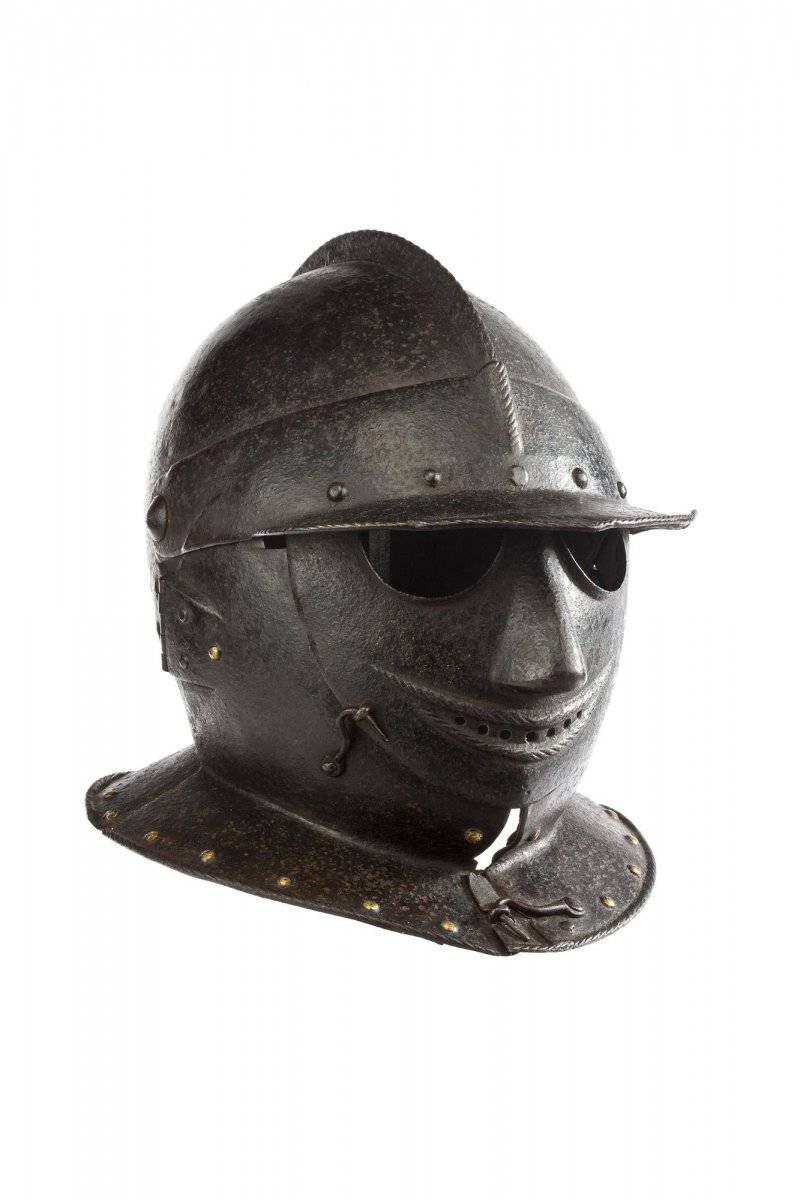 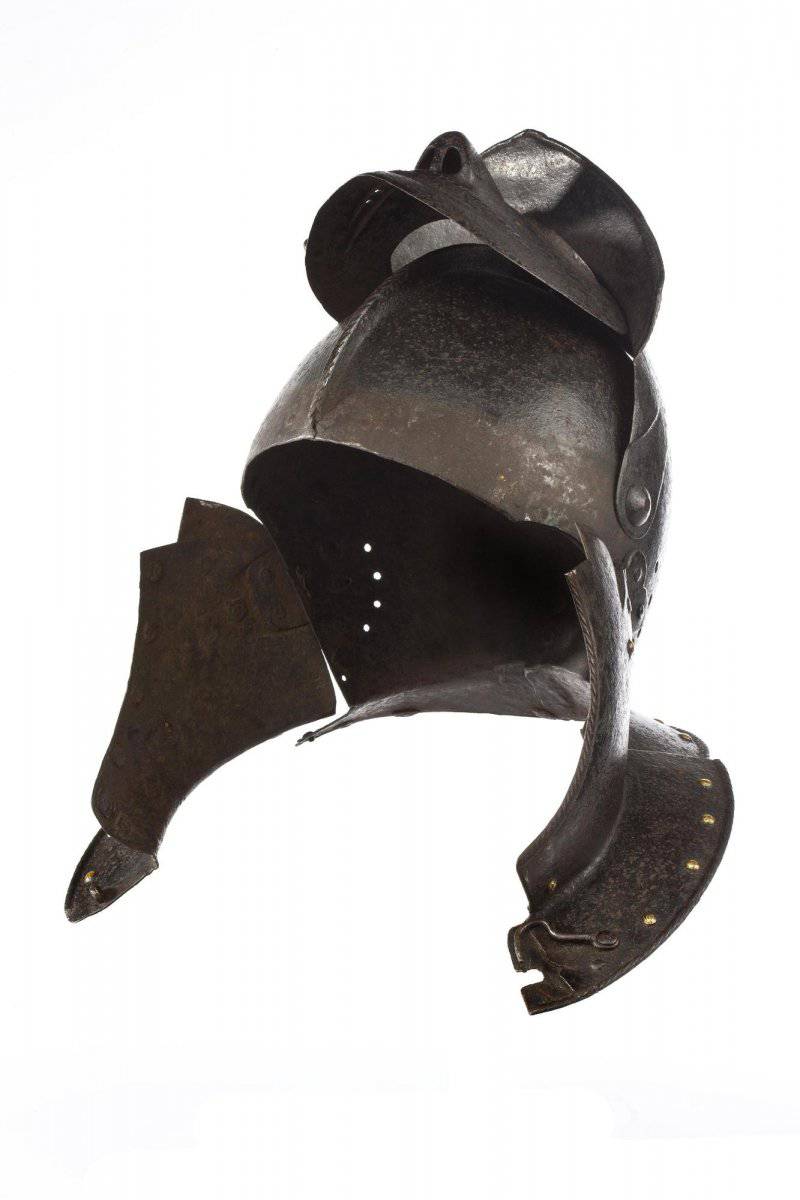 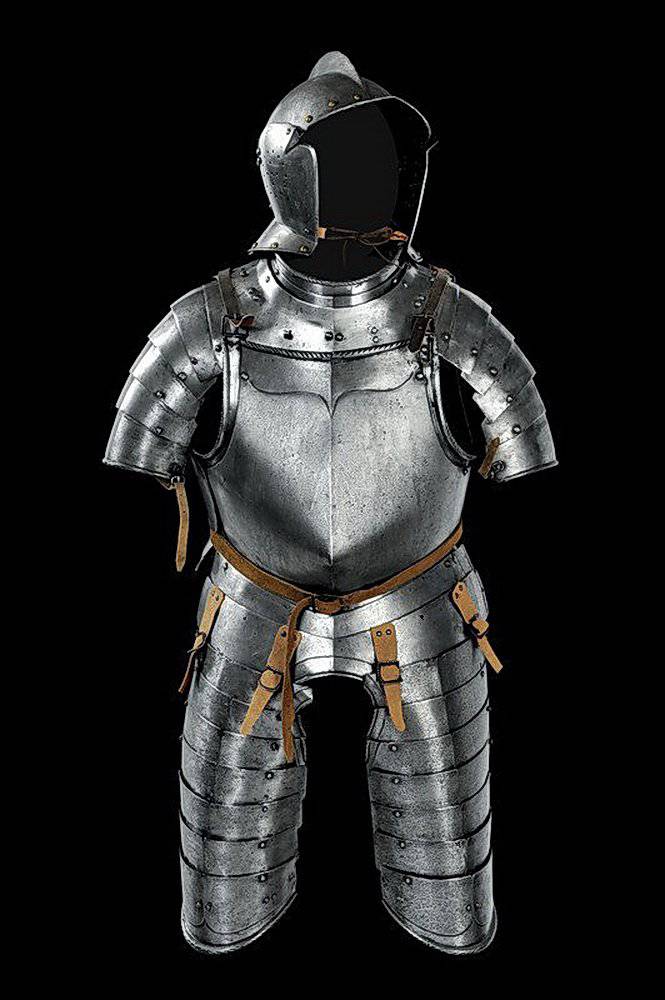 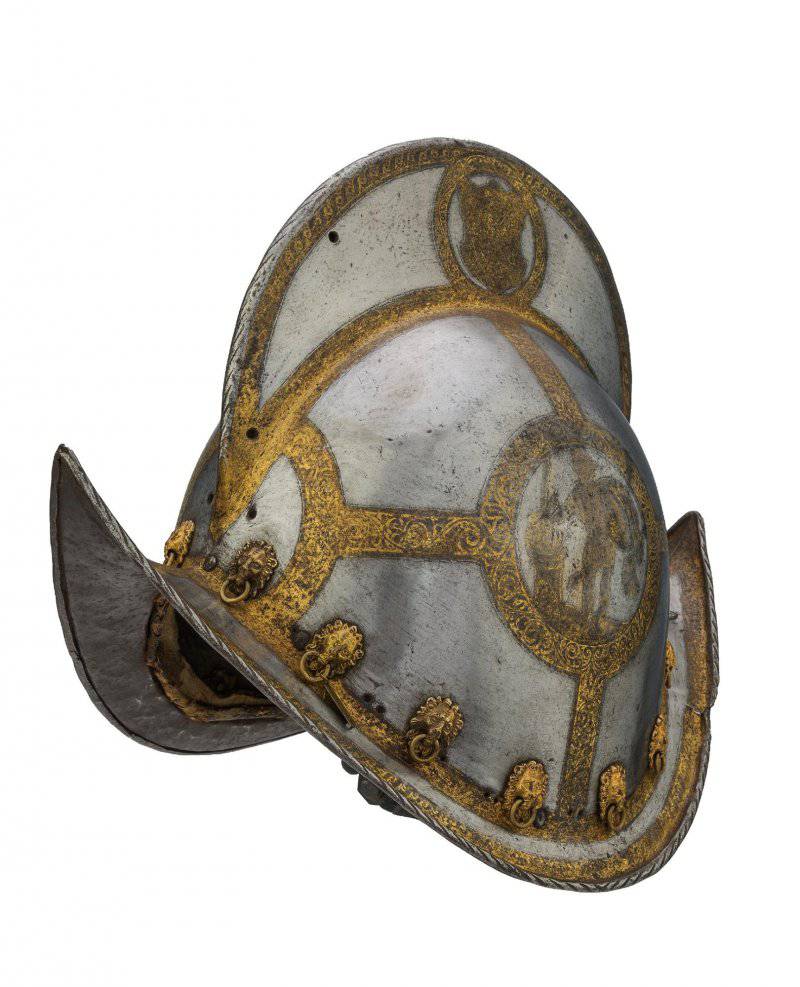 Morion is a well-known all-metal open helmet with a very large comb and strongly curved front and rear fields. Appeared at the beginning of the XVI century and was in use at the beginning of the XVII century. Received widespread throughout Western Europe, especially in Spain and England. In popular culture is inextricably linked with the image of the conquistadors. Used by both cavalry and infantry. 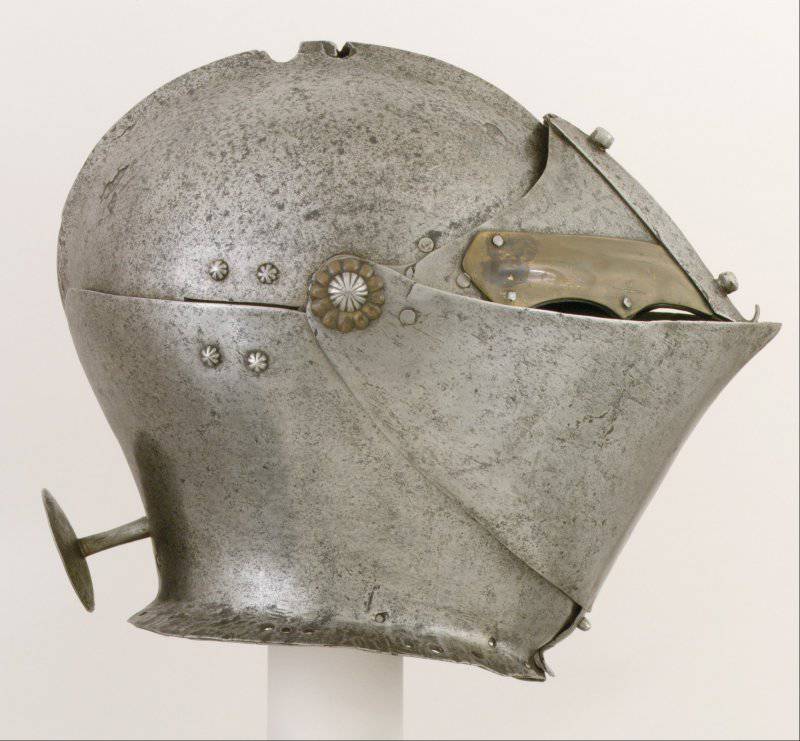 Arme appeared at the end of the 15th century (although in Italy as early as the first half of the 15th century), almost the entire 16th century existed. Along with closed helmets are the most advanced and simultaneously protected helmets in stories. A distinctive feature of the arm is the presence of two moving drop-down parts - headphones, hinged and connected to the chin with a pin and protecting the lateral parts of the head, cheeks and chin. Always have a rising back and up visor. Arme could have built-in protection for the neck and collarbone. 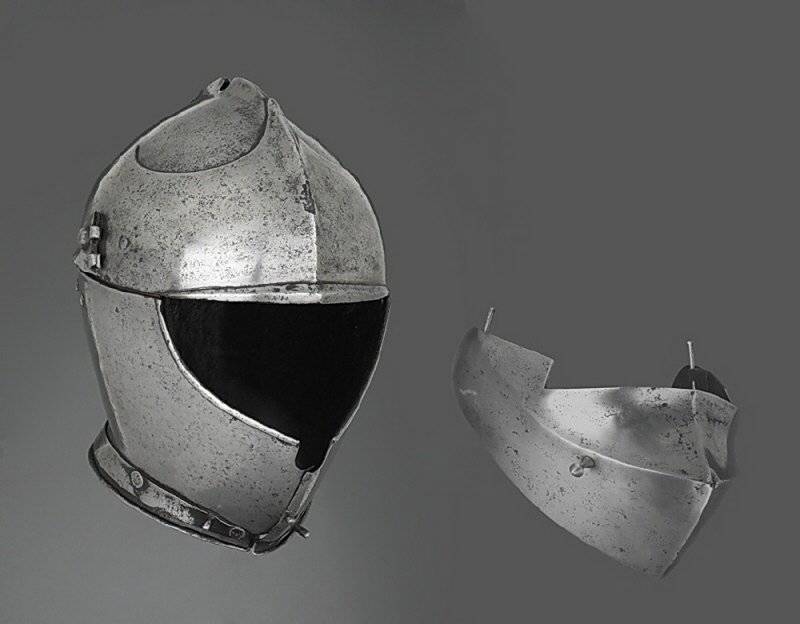 Arme and closed helmets have a special variety taken in the form of a grotesque face mask with a big hooked nose. 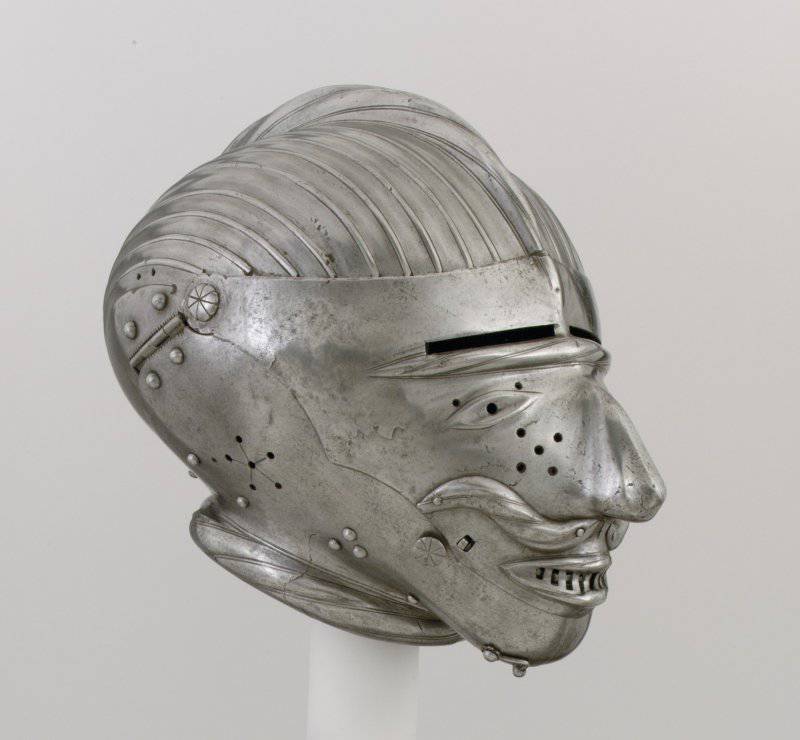 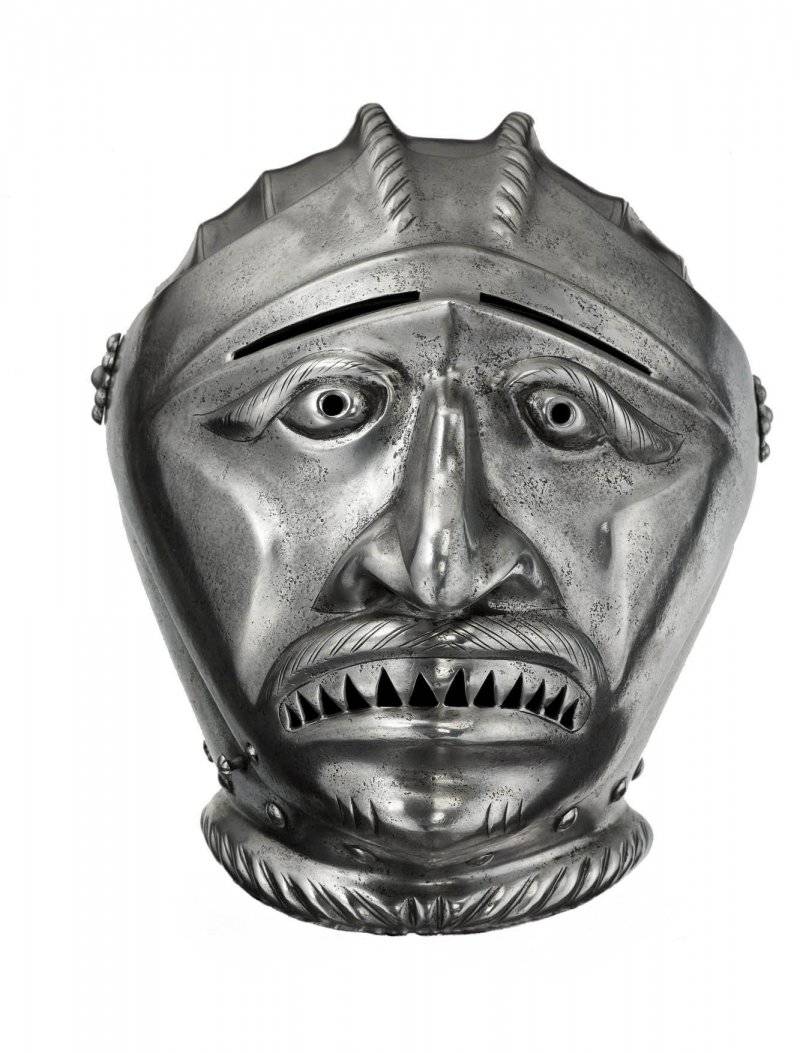 Used by knights in tournaments and in battle. Arme and closed helmets were expensive and therefore not available to all knights. 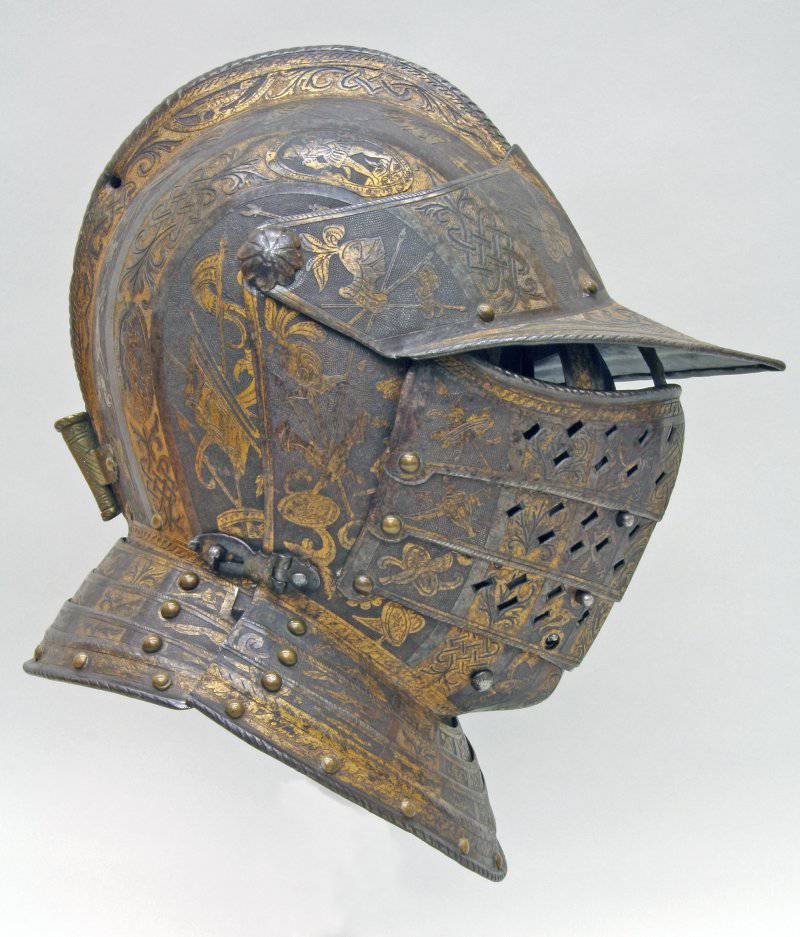 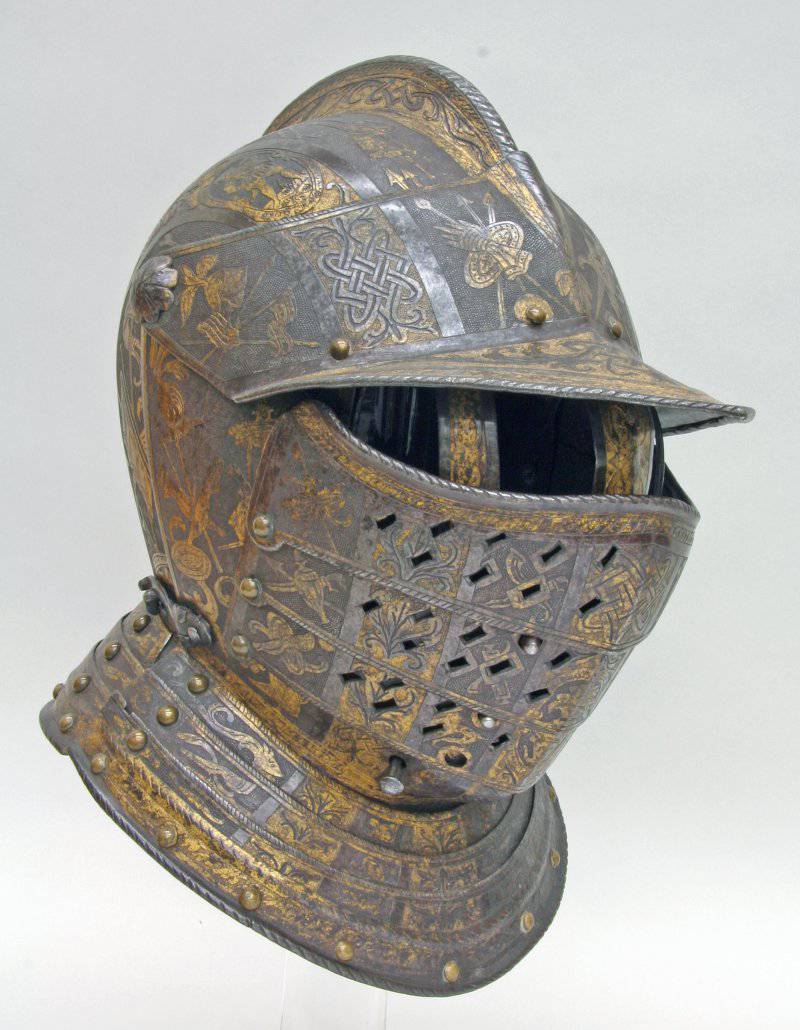 The closed helmet was a combat helmet worn by cavalry in the late medieval and Renaissance era - the 16th century and the first half of the 17th century. As a type of helmet, it appeared closer to the end of the 15th century, although there are earlier instances. Closed helmet is very similar to the earlier arm, but has a different method of opening and design. While the arm has two moving pull-downs, the closed helmet instead has a kind of built-in bevor or lower visor that is attached in the same way to the helmet as its upper visor, often on the same fixings. The lower and upper visor of closed helmets are mobile. 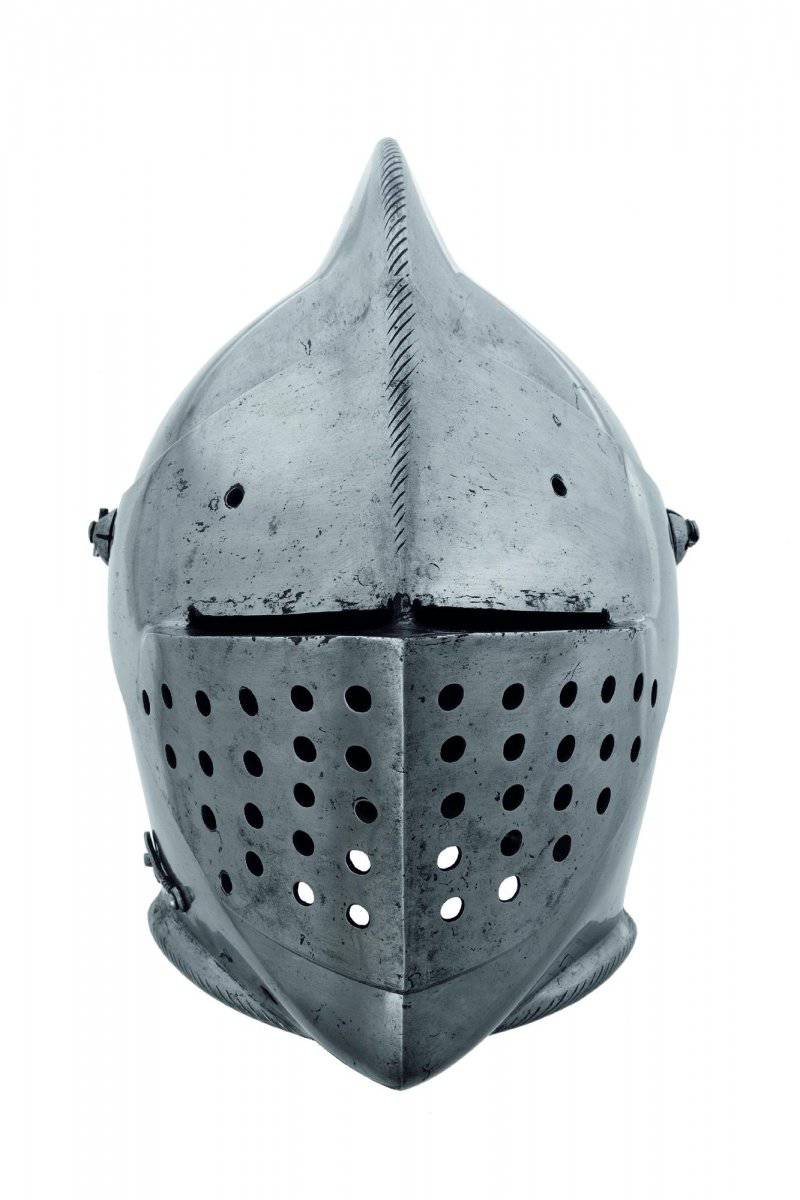 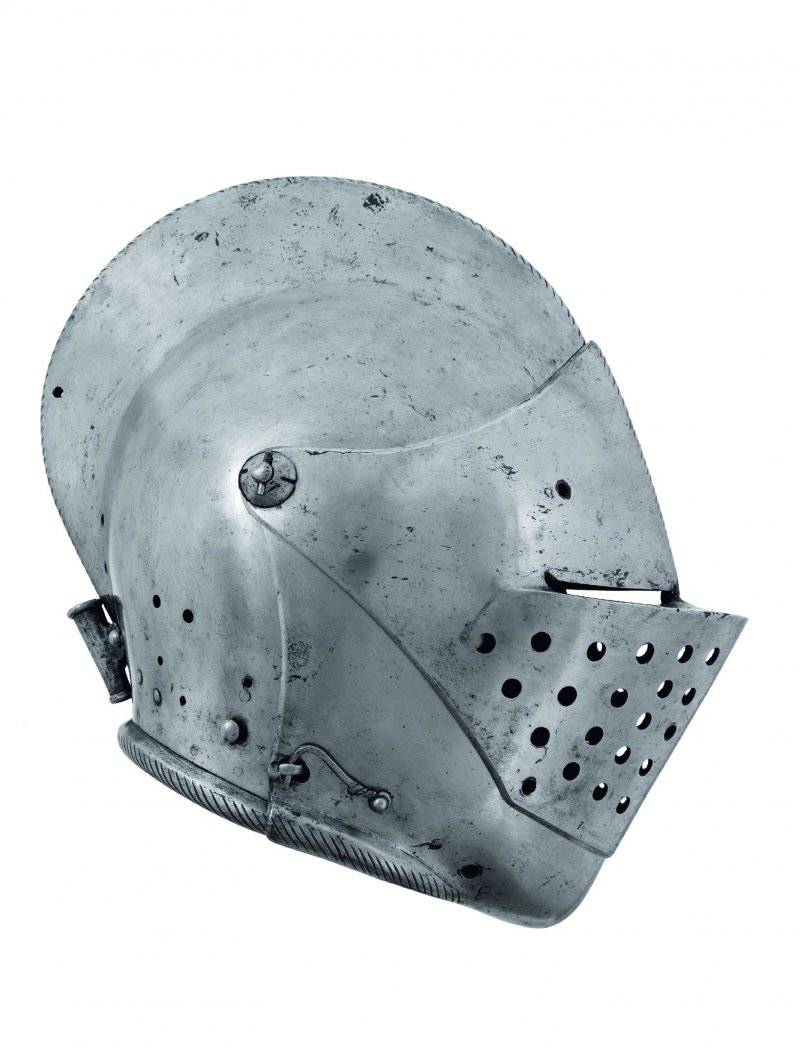 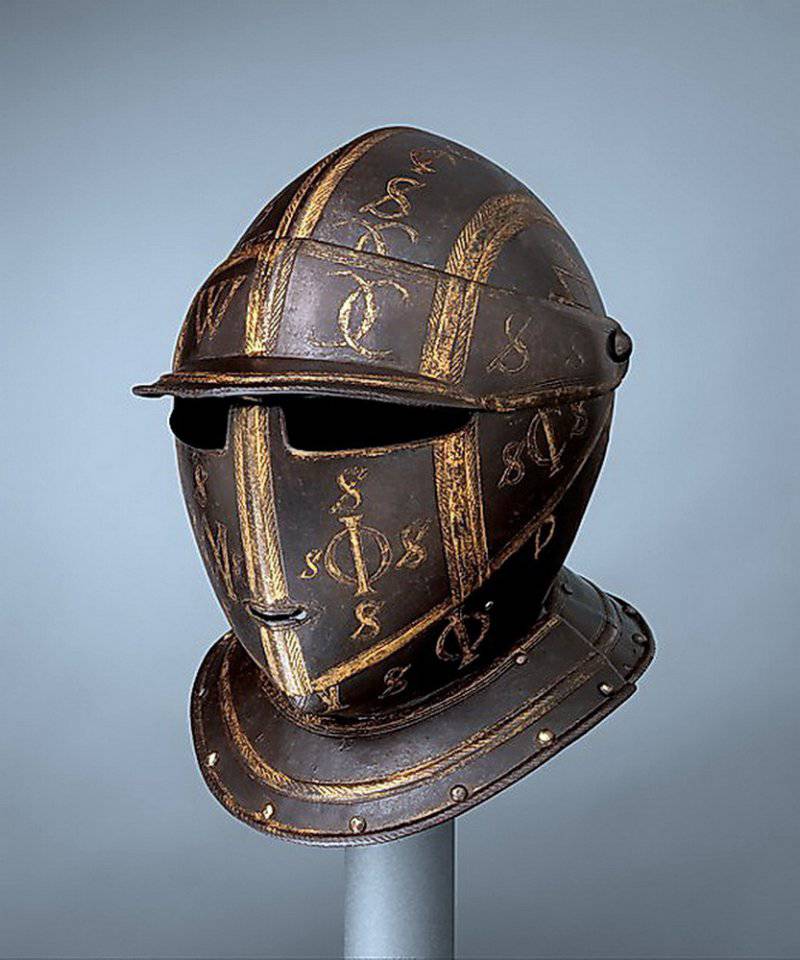 Closed helmet fully protects the head, has a characteristic rounded shape and, as a rule, a massive corrugated comb. Often, it has built-in protection for the neck, throat, and collarbone. 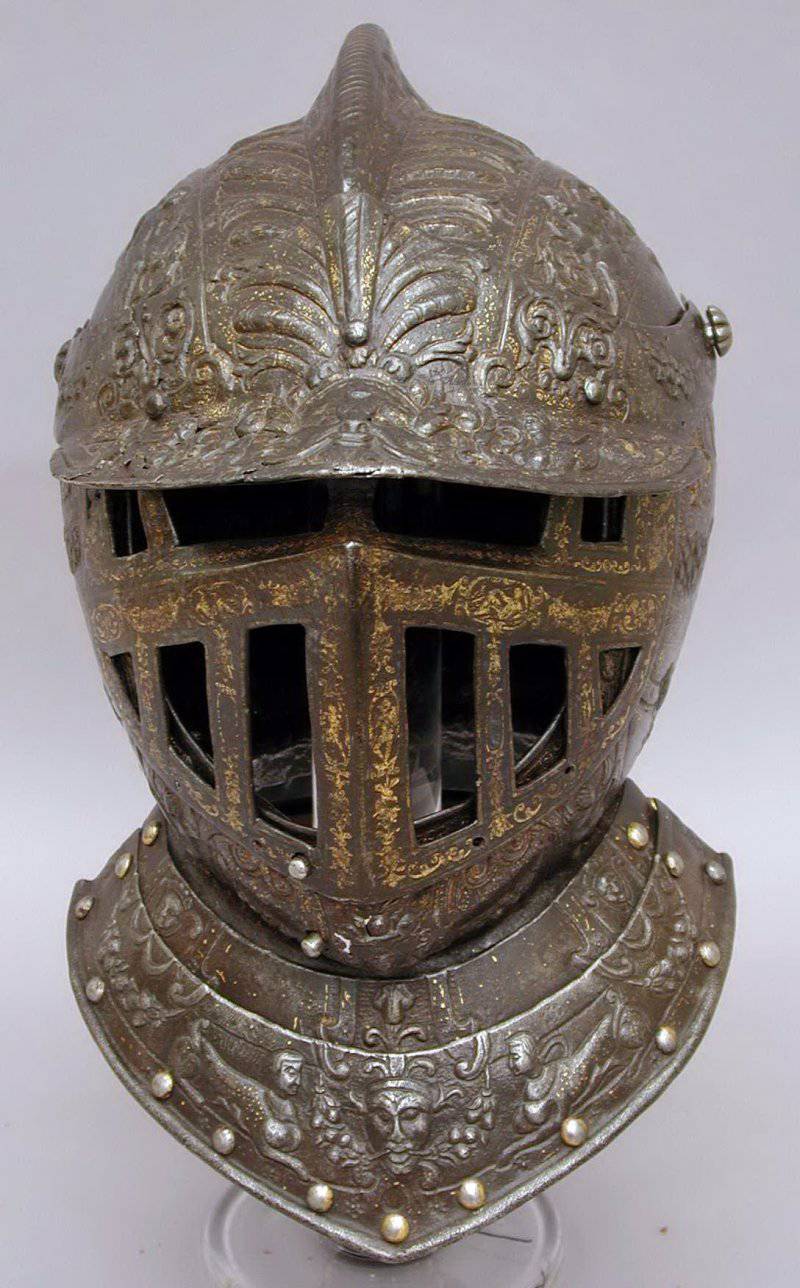 Fig. 42. Closed helmet of the statesman of the Spanish Netherlands, Fernando Alvarez de Toledo, Duke of Alba. Milan. Around 1570 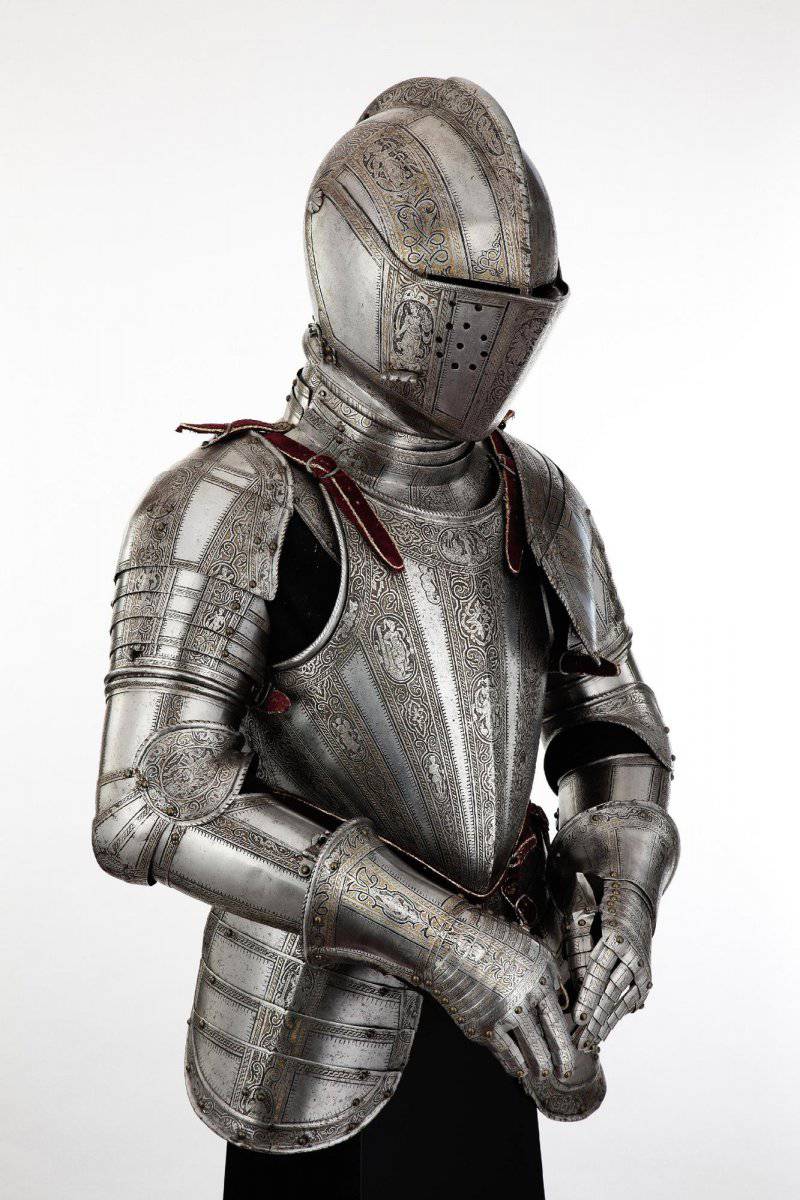 Fig. 43. Composite armor with a closed helmet. Perhaps a knight of the Order of Malta. Milan. Around 1590 (details here: http://topwar.ru/44718-milanskiy-dospeh-mastera-pompeo-della-chieza-konca-xvi-v.html)

During the 17th century, helmets, along with the rest of the armor, gradually fell into disuse in military affairs: they were simply useless against an increasingly sophisticated firearm. weaponsremaining only in heavy cavalry in Europe - cuirassiers. 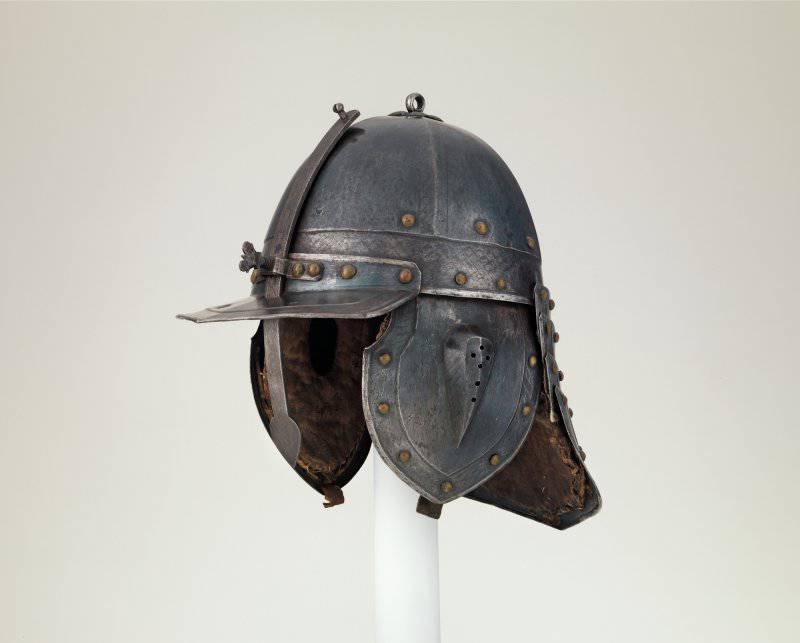 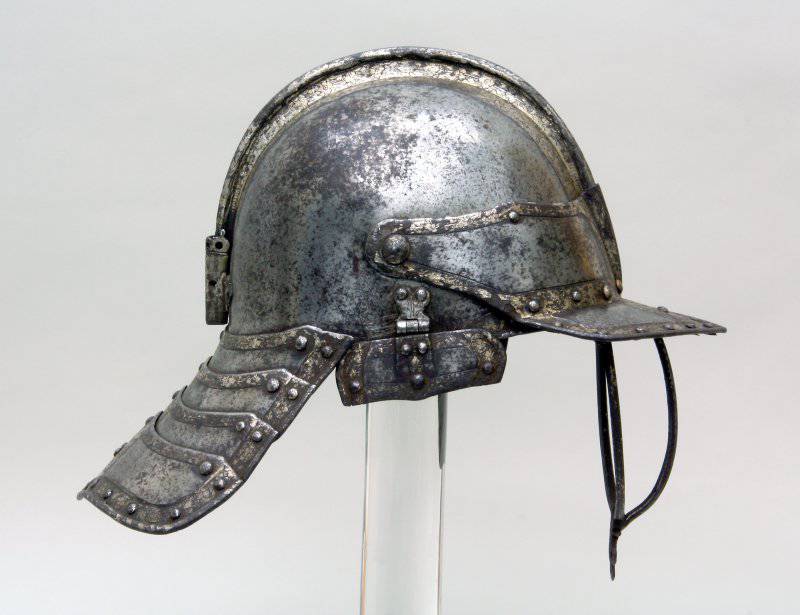 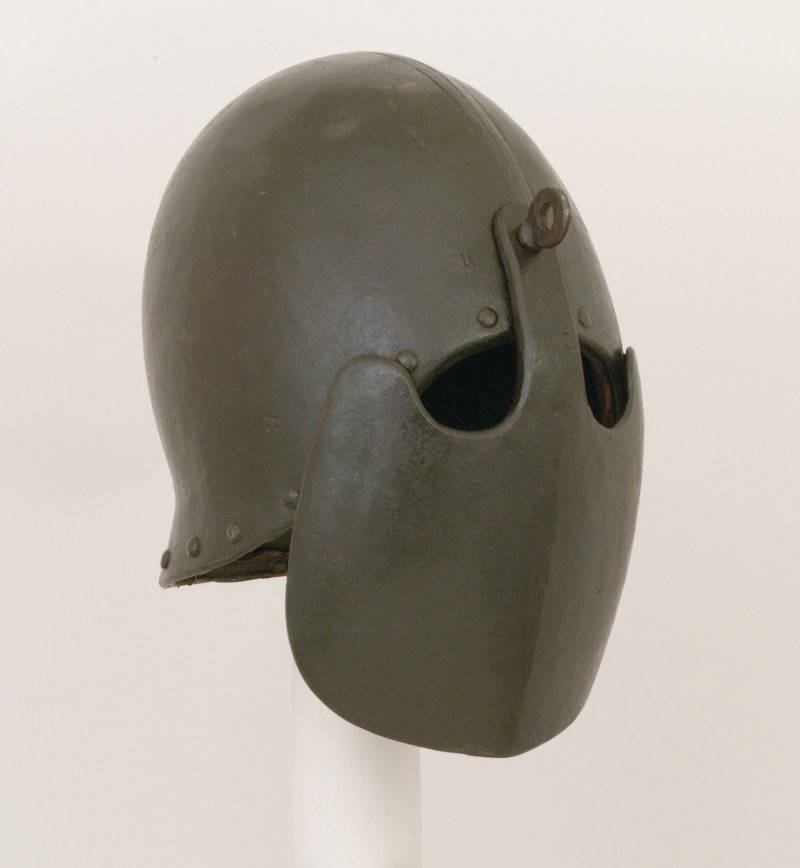 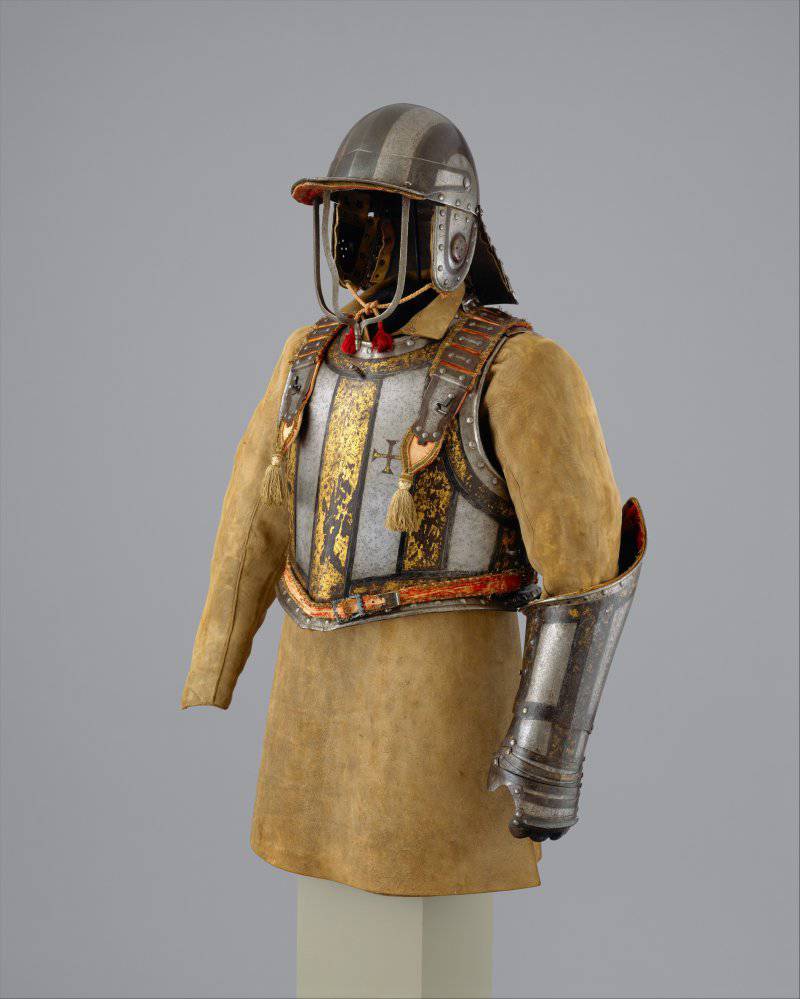 The approach to the formation of armies has changed significantly: if in the previous era, knights needed years of training and a lot of equipment to master cold weapons, the appearance of firearms turned everything upside down. The cost of training and equipping a combat unit for effective combat has declined dramatically. No more need for expensive armor. For several centuries, helmets are practically out of use. However, at the beginning of the 20th century, they reappear in the military - already in the form of well-known helmets. 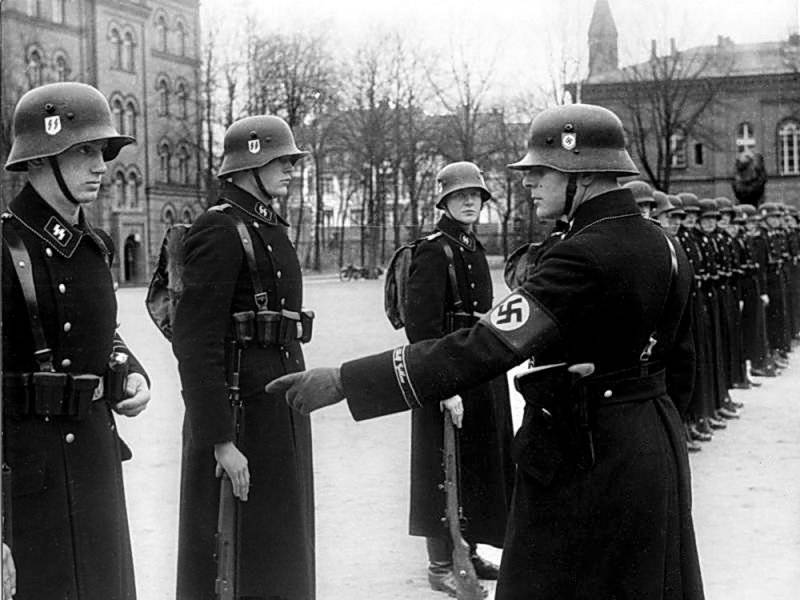 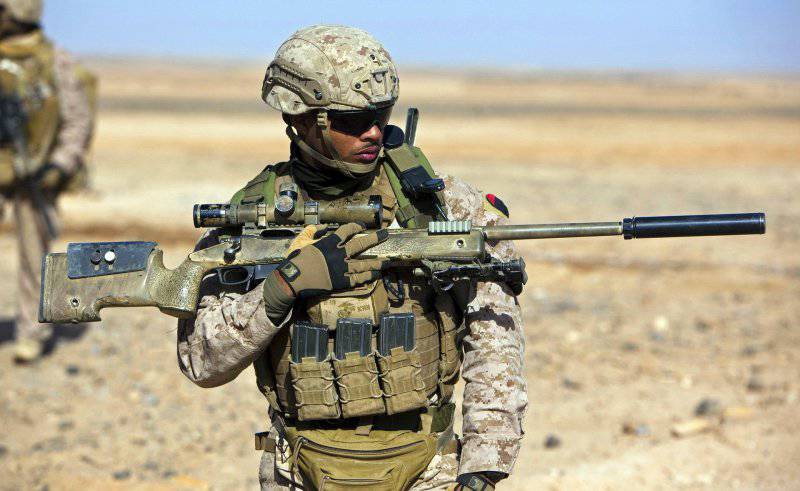