HSE professor “burns”: “There was no war in the Donbass”

16 September 2014
72
The Ukrainian conflict, of course, agitated the minds of the Russian and not only Russian creative intelligentsia (or the "so-called intelligentsia"). On the side, most creative people decided not to stay, but to comment on their position on the Ukrainian conflict in the press, on the Internet, on radio or on television. The creative boiling has reached the point that it seems a little more and Russia will see the “wall to wall” option performed by singers, actors, TV presenters, artists, writers, musicians.

Some decided to certainly go to Ukraine and give a semblance of a concert in support of the Maidan, while accusing others that they did not want to perform in front of the Maidan. The second ones sent the far away first ones, broadcasting wonderful epithets to them and urging them to repent.

Some say that Putin and the part of the Russian people who support Putin are the only ones to blame for all misfortunes. In this part of the creative “intelligentsia”, the Russian people with the “light hand” of the writer Yerofeyev turned into a “coffin with rotting guts”. The other part does not consider it necessary even to comment on this anti-Russian hysteria and urge all the disgruntled, dissenting, dissatisfied to go where they will be pleased, satisfied, and also where they will agree with everything - at least to Ukraine, even to visit “peeing boy ”, Even on the Washington Lawn in front of the White House, even on the Dead Sea resorts.

In general, the spears are broken not childly ... They strive to spit in each other’s face, then pour a bucket of stinking mud at each other, or even “correct” the physiognomy. And many have even forgotten, and why, in fact, the fuss arose ... Already such persons and not up to Ukraine as such - the main thing is to continue the “intellectual hand-to-hand” with opponents, cluttering up the media with statements, disputes, interviews, posts and comments. And at the same time everyone strives to excel - to break out of the "gray mass". Here, Erofeev distinguished himself, got rid of "rotting guts" ... Makarevich distinguished himself ... Ulitskaya excelled ...

"Putin", "the bloody hand of the Kremlin", "Ukraine is the beacon of democracy", "slave Russian people", "stinking Russian consciousness", "imperial ambitions", "thanks to Twitter for a happy old age" - already, it would seem, there is nothing that could give the representatives of our esteemed creative "intelligentsia" food for a new fight with each other, food for protrusion and narcissism.

But no ... There are still too creative personalities that give out simply stunning interpretations of events. On the eve of one of these gentlemen, Sergei Medvedev, notorious in his proposal to share the Russian Arctic with the “world community,” is a professor who is undoubtedly the most advanced university in the country - the Higher School of Economics, distinguished by the presence of equally sophisticated employees. Mr Medvedev, referring in his rhetoric to the French philosopher Jean Baudrillard, declares: “There was no war in the Donbas.” 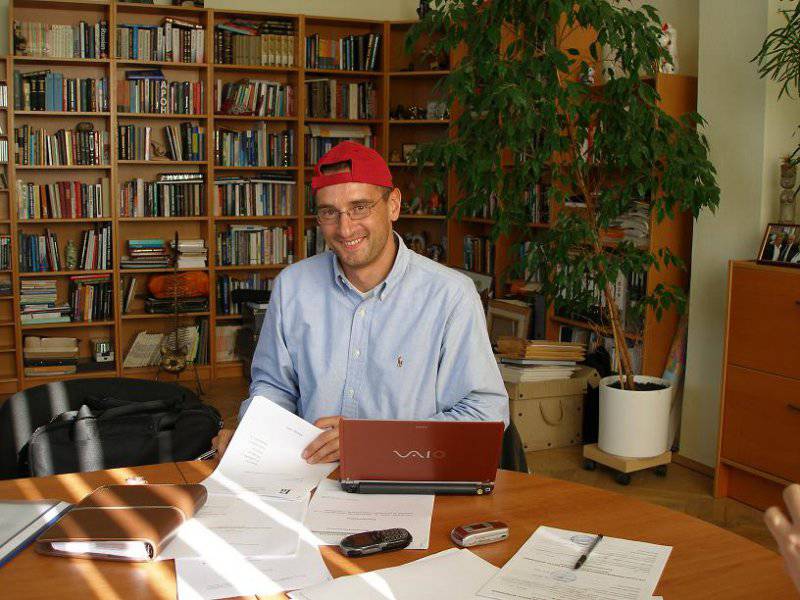 Full version of the article - on the pages of the Russian version Forbes).

This is what a professor at the Higher School of Economics is trying to convey to his reader: you, reader, think that a civil war was going on in Ukraine; you think that the junta came to power in Ukraine, the backbone of which is made up of oligarchs; sure that the people of Crimea immediately after the change of Ukrainian power was in danger? So, reader, you are a dense fool ... Medvedev declares that all this is a “reality show”, which is promoted by the Russian media. And, according to Medvedev (well, the one that Sergei), even Putin was the victim of a "post-modern simulation." Having seen the releases News and having read propaganda resources, Putin came under their full influence and began to realize what he was inspired by the insidious media owners and other representatives of the media.

From the article by Sergey Medvedev:

(...) The war in Ukraine and with Ukraine was invented by propagandists, along with simulacra of "Crimea", "Donbass", "Novorossiya" and "Russian world", with myths about the "oppression of the Russian-speaking" and "the hand of the State Department". This script was beautifully directed and put in the head of a huge country and its leadership: Putin is exactly the same hostage of a television picture, just like a simple viewer.
In Russia, 2014-th embodied the plot of the film "Tail wags the dog": we Ernst wags Putin.

Oh, you ... the President and of that (by his natural naivety ...) were misled by the TV people. It turns out that everything is very simple (well, Sergei Medvedev himself tells us about it, but perhaps a professor from the HSE can be wrong? ..): such characters as the junta, pravoseki, punitive, Bandera, militiamen are purely fictional, this is a notion of the media and who the media plays along.

From the article by Sergey Medvedev:

It is in the spirit of the times that it (Russian television - note “VO”) adapted plots from fashionable TV shows and computer games for the credulous Russian television viewers. (...) turned Russian television into a gigantic meat grinder about the production of hatred and lies, against which the blunt propaganda machine of the USSR looks the height of objectivity and professionalism.

(...) it can be said that there was no war "in the Donbass", it was born in the inflamed imagination of Russian propagandists and projected by TV people into reality, like on the walls of Plato's cave. She emerged from the head of the political consultant Zeus, like Athena, in full military gear. The result was massive casualties and destruction in eastern Ukraine, refugee flows, a blow to Russia's economy and reputation — but the war “in the Donbas” was and remains a simulacrum, a projection of a non-existent, propaganda scheme that gained flesh and blood.

So the professor from the Higher School of Economics was diagnosed, and all the dots above “Yo” were dotted - the whole thing, it turns out, is in the false and hypocritical work of the media (and only Russian), which

b) they were forced to believe the Crimeans that the new Ukrainian government (white and fluffy by definition) would start oppressing them, and no one was going to oppress the Crimeans - neither the “fictional” Yarosh with the “fictional” Sashko Bilym who promised to send the “friendship train” to the peninsula with non-existent "hundreds of thugs." The evil thugs of the Prosecutor General’s Office did not capture, did not burn people in Odessa, did not shoot ukrovoyaki at veterans in Mariupol on May 9. There was no such ... Computer game, which the Russian media themselves have translated into reality ...

c) suppressed the minds of the population of Donbass and implemented bloodshed. The Ukrainian army was shocked by this - we (the army) are not there, we are fictional, and the masses “zombified by Ernst” are fighting against us, burning our “nonexistent” Tanks, shot down the bombing "make-believe" quarters of Lugansk aircraft.

Our present war is the belated fruit of the provincial Russian postmodern, which seemed to have washed away the wave of crisis in 1998, but which sprouted in our era with the fruits of cynicism, simulation and total propaganda.

Blamed so stigmatized: total propaganda, cynicism, simulation ... The situation is completely different in the Western or Ukrainian media. After all, it's just the bastions of realism, chastity, objectivity and serving the laws of morality. No matter what the material in CNN or on Radio Liberty, there is no doubt a sample of the bare truth, impartiality and directness. And about the crash of "Boeing" they laid out everything on the shelves, and in the residents of Donbass they rightly (and how else) saw the terrorists, and Nuland’s walks on the Maidan were set out as an aid exclusively to bread for the masses. The war in Afghanistan is, the totalitarian regime of Assad is there, the Iraqi chemical weapon, the Iranian nuclear bomb, the North Korean threat to democracy, the non-participation of the United States to the birth of Al-Qaeda, the Taliban, ISIS - everything is there. But there is no war in the Donbass ... It's all mean-spirited “Ernst” things to mislead the president, the people, and the whole world. Well, not Ernst, but some Mephistopheles ... Woland ...

The next article by Prof. Medvedev, which is likely to address the problem of “absence” in stories and the Great Patriotic War, too ... Like, they made up “some kind of” Pravda newspaper of “nonexistent” characters and objects (fascists, SS men, concentration camps, policemen, Bandera), and the “dense” Russian people misled and together with him naive Stalin, who was forced to comply with the reports of Soviet newsmen ... And the "world man" Goebbels, because of the Soviet media, was eventually forced to commit suicide - the "poor fellow" ...