Tymoshenko: "I will give you a parabellum" 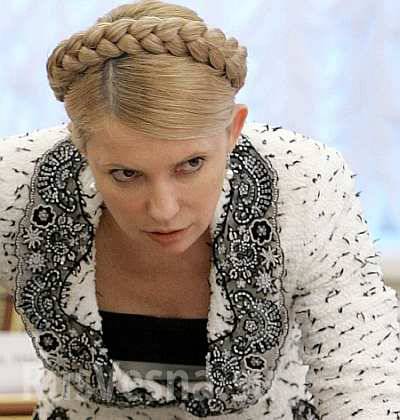 Yulia Vladimirovna being hounded. Previously, they tried to poison the railway workers with special poisons in the Kharkov hospital, but the enemies did not succeed in the form of a criminal panda, that is, an extremely angry Ketay bear. Not on the body hit, bastards! Now, very different people have unleashed a vile and extremely cynical campaign to persecute the leader of the “Batkivschyna”. In short, mined the Central Election Commission.

There is, therefore, Julia Vladimirovna all such in “Dolce Gabbana”. On the heart, of course, non-healing wound. Not without it. According to one version, taxis are handing in documents to the CEC on the subject of its examination as a candidate for people's deputies and the leader of the block of the same name. No, I'm lying. So far, what she brings to the electoral commission is called the “Batkivshchyna” union. According to another version - to transfer documents on registration of a group of extremely conscious citizens who are trying to abruptly join NATO and initiate a special referendum for this purpose.

All around, of course, rejoice, honking, buzzing. Some even from yesterday are buzzing, as they learned that Arseny Petrovich separately goes with his invisible “Front of Changes”. And then to meet the miner with a sign "Ahtung! Minen! The dog came, specially trained. Search for explosives, drugs and other items that are in high demand in conditions of unmarred martial law. There was a complete bummer, because someone wanted to break Tymoshenko all the pre-election buzz. And Yulia Vladimirovna did not remain silent. She rarely speaks out at all, only recently, on the advice of experienced PR and doctors. Tymoshenko made it clear that the CEC building was mined by phone on purpose. Some pots wanted to annoy her cool about the initiative of joining NATO, where there are many high-precision weapons last generation.
I can not disagree with Yulia Vladimirovna. Mining of the Central Election Commission really looks a bit strange. Usually in Kiev, they prefer to virtually blow up metro stations and shopping centers. Occasionally "blow up" the central railway station. Moreover, most people of Kiev are convinced that telephone mining is the work of Russian terrorists. Recently, he himself witnessed how a citizen in a state of mild alcohol intoxication told that "the Muscovites bring people to the utmost point." Moreover, under the “extreme point” he most likely meant himself. In response, the patriot threatened to blow up Smolensk Square, which he, for reasons unknown to us, "knows perfectly well up to the last crack."

Therefore, we have to admit that the government has unleashed a certain persecution against Tymoshenko. Amazing fate of a woman with a scythe: Kuchma is poisoning, Yushchenko is poisoning, Yanukovich is poisoning. Now the Maidan has won, cheap European goods will rush into the country, and the vulgar persecution continues.

Yulia Vladimirovna has been prudently trying to position herself as the only opposition force in recent months. Indeed, this niche was free. "Regionals" are now almost the best friends of the ATO. Wherever you spit - everywhere a complete patriotic "comradeship", ready to support the course of the head of state. True, with some reservations, often of a sexual nature (the case of Lyashko). The communists, after their leadership otgreblo from unknown people in body armor, have become very restrained. Their restraint was appreciated and, judging by everything, they would be allowed to make elections. It turns out that there really is no opposition in the country. In the purely political sense of the word. We still do not take into account many field commanders who are ready to "go to Kiev". There is a slightly different topic.

The woman who spent a lot of time on the orthopedic mattress quickly realized the peculiarity of the current moment. You can’t refuse Tymoshenko’s flair, although recently it has been pretty dull for objective reasons. Therefore, the Yulki received the command carefully, trying to maintain patriotic integrity, to troll the current regime. The following key trolling points were identified. First: where, blah, historical ratification by the Rada of a no less historic association agreement with the wonderful European Union, where there is so much gas, coal and other minerals, will Ashton be said? The authorities are very sensitive to such attacks, because the matter is delicate.
Few people know, but there is no gas in the EU. Therefore, it is necessary to quietly try to negotiate with the Kremlin, pretending that the process of agreeing on certain norms in the "trilateral format" is underway. Knowing this, Tymoshenko repeatedly strikes a sick European callus, causing an unhealthy excitement among racially correct experts.

The second point of trolling: it is necessary to urgently impose martial law, because, although the Ukrainian troops, of course, valiantly come, but there are also boilers. It is clear that official Kiev, presented to us in the form of an extremely democratic regime, will never go to impose martial law. For the sake of holding parliamentary elections, they are ready to form election commissions under conditions of a limited nuclear strike. The main thing - to accurately determine the number of voters. Or at least approximately. Plus or minus a few million. The constant dissemination of this topic causes understandable irritation among representatives of the PA. Many already want to put Tymoshenko back into the clinic and prescribe a good, high-quality sedative.

Third: "the rate of the Supreme Commander." Sly Yulia Vladimirovna already ten times offered the president to form a rate in a convenient, well-ventilated bunker, from where he could comfortably control the conduct of the anti-terrorist operation. Why this is done, I think, no need to explain. Although no, I will explain. If there is a stake, then instead of the General Staff and the Minister of Defense, the Supreme Commander will be blamed for treason. "Merged, nit, guys near Ilovaisk!". Semen (the same one) can break into the stake and perform his trademark striptease with a bandana. The sight is frightening and, to put it mildly, stunning. And there will be no Geletey, who again can declare the threat of nuclear war and the end of the hybrid war.

Fourth: "the secret Minsk protocol." Once, the media passed a statement by Yulia Vladimirovna about the need to hold parliamentary hearings about the "peace accords" signed in Minsk. The speaker of “Batkivschyna” Sergey Sobolev, known for his burden to all the beautiful, in particular to cattle, rightly pointed out the emergence of “the phenomenon of subjectivity of the DNR and the LC”. He himself would never have thought of this before. Allegedly, according to Sobolev, the AP agreed with the "separatists" to freeze the conflict within the boundaries that have been formed at the moment. The information was extremely negatively perceived by the supreme commander himself.

And finally, the fifth point of trolling: joining NATO. With the naked eye it is clear that this topic is extremely sensitive for Kiev. He wants to enter, but, as it turned out, such a decision is not within the competence of the city authorities. And here appears Yulia Vladimirovna, all in white, of course, with a crutch and threatens to hold a referendum on joining NATO. We have already entered the EU, now we should try there. Worse still will not. The situation is delicate. It is impossible to open Tymoshenko in the direction coinciding with the pro-NATO course. It remains only to insert her stick in the wheel. It sounds somewhat ambiguous, but it just so happened. Yulia Vladimirovna expects that her opposition technology will work. Of course, she is not the same. Lost her grip, squandered charisma. Nevertheless, I would not write off Tymoshenko’s circulation. If fifteen percent of the remaining electorate is ready to vote for Otvir Lyashko, then anything can happen. In short, brave yourself, Julia, we stocked up on popcorn. Don't let down.