The incomplete epiphany of the world community 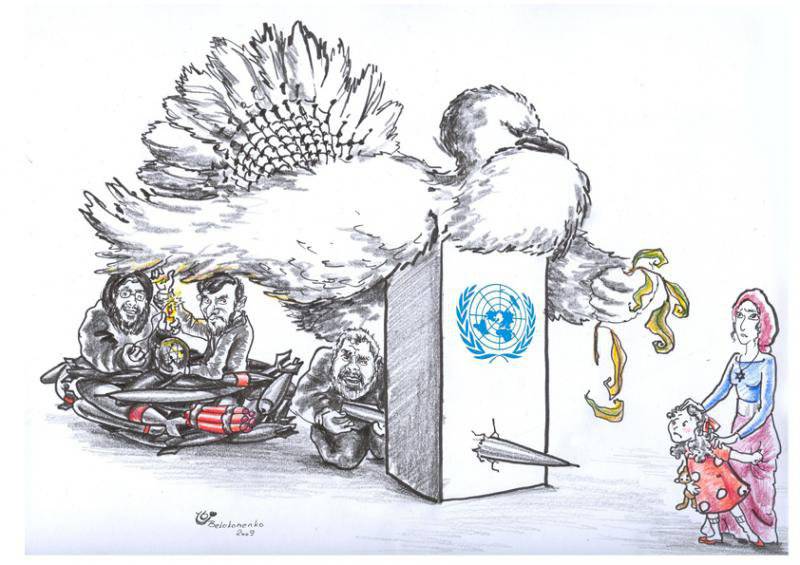 What has happened to the world community? For more than three years, it didn’t want to hear anything about the crimes of the so-called “Syrian opposition”, only scattered false accusations against the legitimate leadership of the SAR. And now, when more than 190 killed thousands of people, when many Syrian cities were turned into ruins, the economy was undermined, the role of Syria in the international arena was weakened - suddenly everyone erupted in condemnation of this very “opposition”. But, as is the case with the current "world community" - even this is not done completely.

The crimes of only one single group, albeit the most influential, the “Islamic State of Iraq and the Levant” (ISIL) are considered. But there is also the "Syrian Free Army", and "Dzhebhat An-Nusra" (associated, by the way, with "Al-Qaeda"), and "Islamic Front", and all there "Brigades" of the type "Liva At-Tauhid ". But they are either “forgotten”, or, moreover, they are all justified and even tried to be put up as fighters against Islamism - indeed, bees against honey.

The so-called Independent International Commission for the Investigation of Events in the SAR, led by Paulo Pinheiro, published a report in which, as usual, both the right and the guilty are accused. Along with fair accusations against ISIL, the report also mentions the alleged guilt of the force fighting ISIS directly on the battlefield - the Syrian army.

However, this time the brunt of the authors of the report did not come from the army, as was usually the case with all “independent” commissions, but against the “Islamic State”.

The document emphasizes that in the areas controlled by the Islamists, the most difficult situation. Militants there are mass executions, women are beaten with whips for "inappropriate" clothes, and children are recruited into juvenile mercenaries. And those who are held captive by terrorists are tortured. Such actions, according to the authors of the report, can be equated to war crimes and crimes against humanity.
The crimes of other “opposition” groups are mentioned only briefly in the report. But it contains evidence of what the Syrian government had said from the very beginning - there is a constant influx of militants from abroad that threaten international security.
In addition, it is noted that some states, as well as private individuals, continue to supply weapon action movies. Then this weapon serves for war crimes.

But the “recipe” proposed by the commission, again, is such that it affects the interests, first of all, of the country's leadership: it is proposed to introduce an international arms embargo. Such a proposal, however, puts the Syrian state and the gangsters against it on one level. Moreover, in practice this will only mean strengthening the blockade of official Syria, while gangsters will get their weapons illegally, bypassing the embargoes and their patrons, all international decisions are not a decree and not an obstacle, which has been proved by practice.

US President Barack Obama, who a year ago was on the verge of making a decision on the bombing of Damascus to support terrorists, now suddenly called the militants of the "Islamic state" barbarians. At the same time, he noted: "The eradication of such an infection as ISIS will not be easy and fast." On one thing only, the American president is silent: that the “Islamic State” was replenished by the very same militants that he was ready to defend with the cruise missile a year ago. And this organization strengthened at the expense of the same help - “lethal” and “non-lethal”, which he personally ordered to send to the anti-Syrian “opposition”. It was easy and fast only to generate terrible power, and fighting it was a much more complicated and long-lasting matter.

In Ankara, meanwhile, there was a performance of the inauguration of one of the leading opponents of Syria, one of the main assistants to terrorists of all kinds and stripes - Recep Tayyip Erdogan. The ceremony began with a scandal. The fact is that before taking the presidential oath, the latter had to resign as prime minister. But for Erdogan, as always, the law was not written - he did not do that. And without such a step, the inauguration itself was illegal. Deputies of the opposition People’s Republican Party raised this issue: since Erdogan violated the Constitution, the inauguration cannot be held. Parliament Speaker Cemil Chichek, however, decided differently: for him the will of the owner is more important than the law. In response, the opposition left the hall, defiantly throwing paper with an illegal decision in the direction of Chichek.

The election of Erdogan and all his lawless actions for some reason did not cause any protest from the “world community”. When he killed people on Taksim Square, there was, of course, discontent on the world stage, but only minimal. Absolutely incomparable with the wildest harassment unleashed against Syria and its legitimate president.

If we compare the elections held this summer in Syria and in Turkey, then we can only see one thing: the vote in the SAR was much more legitimate. Turnout in Syria and in Turkey is about the same - just over 73%. But it should be borne in mind that in Turkey, residents of all parts of the country could take part in the voting. In Syria, in many areas, especially in the north - on the border with Turkey itself - elections were not possible due to the crimes of the militants. Everywhere, where the citizens could come to the polling stations - they did it. So, in fact, the turnout in Syria was higher. As for the foreign communities, if the Turks living outside their country ignored the elections, the Syrians, on the contrary, showed unprecedented enthusiasm and took part in the vote, despite the unprecedented pressure and threats of the West.

With all this, Erdogan scored a little more than 51%, and Bashar Al-Asad - more than 88%. So, it is asked, who is more legitimate? Who really supports the people?

But Washington and his allies have no questions for Erdogan. However, if the US really wanted to seriously fight terrorism, they would strike, primarily, in Turkey. More precisely - in the training camps of terrorists, which the Erdogan regime created in the south of the country. It is through these camps that most of the foreign militants who come from Europe and intend to go to Jihad to Syria, as well as to Iraq, pass through. It is there that they receive the necessary combat training, after which they join the ranks of radical terrorist organizations, mostly the notorious ISIL.

The Turkish prime minister has already become a man who said that ISIS is not a terrorist organization at all - former Foreign Minister Ahmet Davutoglu. The same task that was supposed to solve the task “Zero problems with neighbors” declared by the Erdogan regime, however, as they say in Turkey, “Zero neighbors without problems” actually came out. Now, under the constitution, this person will actually determine the policy of the Turkish state. Unless Erdogan personally “pulls the blanket” in his direction and does not expand presidential powers. And that's exactly what he is going to achieve. But anyway, Davutoglu - a bright accomplice of the ISIS terrorists - will be an influential figure.

But the United States and the West are trying to point out “ignore” the pernicious role of Turkey in the Syrian conflict. After all, then you have to admit that one of the key countries of NATO is a factory for the mass production of sadistic terrorists who are guilty of the terrible crimes that are now vying on in the world arena.

In Damascus, the atrocities of “opposition” militants of all stripes continue. On August 26, on a road between the suburbs of the capital Dishan and Zabadani, a car was fired at, in which members of the national reconciliation commission Fawaz Ismail and Nabil Alla-Ed-Din, as well as the driver. Everyone who was in the car died. Mortar shells were fired at the city of Harasta near Damascus - six people were injured. On the highway near Harasta, a motorcycle rider, shot by a sniper terrorist, was seriously injured.

28 August central districts of Damascus are enveloped in smoke. Terrorists carried out a massive mortar shelling of several metropolitan neighborhoods, as well as suburbs. Among those killed is a 12-year-old child. Dozens of people were injured.

Such crimes occurring almost every day do not really attract the attention of any “independent” commissions. However, days add up to weeks, weeks to months, and the number of innocent victims grows and grows.

But here is a crime that the “international community” can hardly overlook. On August 28, on the territory of the occupied Syrian Golan, terrorists kidnapped the 43 members of the peacekeeping mission, who served on the line of separation between the SAR and Israel. This is far from the first evil of the anti-Syrian “opposition” against peacekeepers: previously, at least twice, they were attacked by militants. It should be noted that in the area, so far, the Islamic State is not acting at all, but the most “democratic”, “moderate”, so beloved and cherished by the Americans “opposition”.

In a statement, the SAR Ministry of Foreign Affairs demanded the release of the abductees and again raised the issue of stopping the arming of terrorists of all stripes.