World typhoons, floods and other floods suffered significant damage, in any case, the possibility of man-made creation. According to official information this summer, the United States authorities are finally deactivating a special Alaskan testing ground - the HAARP (High Frequency Active Auroral Research Program) Research Center of the Ministry of Defense, which translates to “High Frequency Active Auroral Research Program”.

The testing ground that existed 21 year, which is the most powerful 3,6 megawatt antenna field located on 13 hectares, turned into the minds of ordinary people, a number of scientists and, of course, many politicians in different countries into the center of world evil, whose goal is the global extermination of humanity with natural disasters, ozone holes, and even influences on the minds of respectable citizens. In other words, the talk was about the secret development of the US climate weaponsattributed to the sad events of the last decade - the tsunami in the Indian Ocean, the devastating earthquakes in Pakistan and even the terrible accident at the Japanese Fukushima nuclear power plant.

The landfill is already closing this summer, so there will be no fault of HAARP in the flood if it takes place. Nevertheless, it is worthwhile to clarify what the given object was and whether it is possible today to control nature for military purposes.

From the 2002 Military Encyclopedic Dictionary of the Year, we learn that climate weapons are an integral part of geophysical weapons. Above the creation of the weather factor of power, capable of influencing in the state, and even the continental scale, scientists together with the defense departments began to work in 60. In the race for the perfect "destroyer", the military wanted to invent a super-weapon capable of incapacitating enemy equipment located on the other side of the globe. For these purposes, objects were built with the help of which one could create a “mirror” in the ionosphere, capable of reflecting an electromagnetic pulse and sending it towards the enemy.

Another fantastic goal that the scientists planned to realize is the formation of a collecting lens, which increases cosmic radiation and directs it to the enemy. The third message to the construction of such complexes was the creation of a kind of energy harness, with which it would be possible to transfer kilowatt-hours and gigacalories to any part of the planet.

How this “arms race” would end if, in 1977, the United Nations did not sign the Convention on the prohibition of military or any other hostile use of environmental media is unknown. After the document entered into force, all projects for the development and use of climate weapons were officially closed.

Nevertheless, the program of climate weapons in the mini, let's say, the version existed. In 1962, the American project “Violent Storm” was launched, in which the silver iodide dispersion technique in the clouds was first used to minimize the force of hurricanes. The experiment went with varying success. Sometimes it was possible to reduce the force of a hurricane by 10 – 30 percent. But there were a large number of unsuccessful cases.

The project existed until 1983, until it was turned off. Although the maximum program - to pacify the element completely - failed to perform, the scientists got an unexpected result: the ability to cause rain, which did not hide from the keen guys in the Pentagon.

During the Vietnam War, American pilots scattered silver iodide in rain clouds to cause tropical rainfall. For five years, the United States Air Force made 2602 departure only to throw 47 409 containers with silver iodide onto clouds. The operation was codenamed "Project Spinach" and was aimed at destroying the Ho Chi Minh trail, on which North Vietnam supplied the National Liberation Front of South Vietnam with weapons, food and fuel.

Although the Americans managed to cause torrential rains and partially paralyze the supply of partisans, it required huge material costs. In addition, the resulting effect was very short-lived.

But the manuscripts, as is known, do not burn. Silver iodide is now used to break up rain clouds before big holidays. Particularly popular with this method in Russia. However, so far neither the academic community, nor the military, nor even the journalists, have provided any reliable information about the effects on the atmosphere for non-peaceful purposes.

And what about the "irreconcilable friend" of the USA - Russia? In our Fatherland did not lag behind in trying to tame the atmosphere. At the Research Institute of Thermal Processes (now the Keldysh Research Center) in the 70 of the 20th century, they tried to influence the Earth’s atmosphere through the magnetosphere. 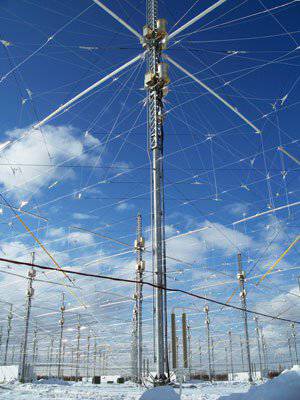 Rockets with a plasma source of up to one and a half megawatts were launched from an underwater carrier in the Subpolar Region. Scientists and military were most interested in the radio invisibility of objects and magnetic storms as a means of environmental attack. The 40th Institute of the Navy conducted similar experiments. fleet at a special training ground near Vyborg, simulating the effect of an electromagnetic pulse on weather conditions. Now the landfill is abandoned, the plants are actively rusting.

But it was not always so. In any case, according to the Americans. In 80, overseas newspapers wrote about the mysterious "Russian woodpecker" - a weather management system that emits low-frequency waves that can cause disturbances in the atmosphere and change the direction of jet air currents. By the way, the Americans associated the prolonged drought in California in 1985 – 1991 with the work of “Dyatla”. Allegedly, this installation blocked the flow of moist air.

It was believed that the "woodpecker" affects even the psyche of people. One of the consultants to the US Department of Defense at the time wrote: “The signal of the Russian Woodpecker” is the most powerful source of electromagnetic radiation ever created by man. 10 pulses per second, 40 million watts, it is psychoactive! It radiates from the Soviet Union and permeates everything in the USA. It is caught by the wires of the power grid and through them flows into our homes. ” In general, there was a lot of panic.

In 1988, the Federal Communications Commission of the United States conducted an investigation and finally found out the purpose of the Russian Woodpecker. This classified object was located near the Chernobyl nuclear power plant in the city of Chernobyl-2. The height of the transmitting station antennas is 2150 meters, length is 800 meters. The system included several radars providing almost complete overlapping of the rays along the perimeter of the USSR (Nikolaev, Gomel, Komsomolsk-on-Amur).

The Russian Woodpecker was a powerful over-the-horizon radar of the Soviet missile attack warning system (SPRN). It tracked changes in the state of the ionosphere that occur when the rocket engines are turned on (the effect of deionization of the ionosphere and a decrease in the reflectance of HF-band radio waves). In this case, the radiation was conducted with a frequency of several to two dozen megahertz, which catches the human ear. The sound resembled the swotting of a woodpecker - that’s the name.

A few years after the accident at the Chernobyl nuclear power plant, the operation of the radar station stopped. The complete closure of the infrastructure of the city of Chernobyl-2 was not carried out immediately: until 1987, it was mothballed. But over time, it became clear that it was impossible to exploit it in the conditions of the exclusion zone, and the main components of the Dyatla system were dismantled.

The USSR was actively engaged in hurricanes. At the beginning of the 80-s, together with Cuba and Vietnam, research began on typhoons, especially the most mysterious part of them - the “eyes”. In the center of each tropical cyclone a region of very low pressure with a high temperature is formed. This is the "eye". Its diameter is 10 – 30 kilometers. It is quiet here, and around, spinning clockwise, storm winds are raging.

Involved what was at hand: IL-18 and An-12 production aircraft, re-equipped to meteorological laboratories equipped with computers for real-time information. Scientists-military searched those places of a typhoon, influencing which, it would be possible to reduce or increase its power, to destroy or change a trajectory with the help of special reagents capable to cause or, on the contrary, to prevent precipitations.

Even then, it became clear that by dispersing these substances into the "eye" of a typhoon, into its rear or front parts, it is possible, by creating a difference in pressure and temperature, to make it walk in a circle or stand still. The only problem was that it was necessary to take into account every second many constantly changing factors. Not to mention the huge need for reagents.

How "fun" lived in the beginning of 90-x, we know firsthand. Therefore, it is not surprising that all work on the effects on typhoons was successfully curtailed. So Americans can sleep peacefully - we still do not know how to manage hurricanes.

In Russia, there is an analogue of the American HAARP test site. At the end of the 70-s, a multifunctional radio complex Sura was built under the program of geophysical research near the city of Vasilsursk, Gorky Region. It is designed to study the ionosphere and is still managed by the Nizhny Novgorod Radio Physics Research Institute.

Sura is functioning now, but not enough - approximately at 100 hours per year, since the institute does not have enough money for electricity for experiments. Only one day of intensive work of the stand can deprive the range of the monthly budget.

The Americans built after the start of the tests of the Soviet radio complex HAARP a few years later. First, objects appeared in Alaska, then in Norway. The main, under the area of ​​14 hectares, is located in the city of Gakona (Alaska). It consists of antennas, incoherent radiation radar, laser locators, magnetometers, computers for signal processing and antenna field control.

The original function of HAARP was to ensure uninterrupted communication with the US Navy submarines during the Cold War, since the deeper the submarines sank, the weaker the signal became. Then Nicholas Christofilos, a physicist of the Lawrence-Livermore National Laboratory in California, suggested using ultra-low frequency waves to communicate with submerged submarines. Then the idea arose of generating them through electrojets — streams of charged particles in the ionosphere.

In other words, all the aspirations of HAARP are aimed at studying the ionosphere, on which the quality of radio communications depends on the lion's share, primarily with the use of satellite constellations.

Now, the zealous Americans calculated and decided that the auroral testing ground was too expensive for the US DoD. HAARP Program Manager Dr. James Keeney at the Kirkland Air Force Base in New Mexico made clear on this point: “The facility is currently closed. The point is money. We don't have them. ”

HAARP is no longer a worldwide “stimulus”. But questions remain. Is the test site guilty of recent natural disasters, and is it possible to create climate weapons today?

Vladimir Kuznetsov, director of the Institute of Terrestrial Magnetism, Ionosphere and Radio Wave Propagation named after N. V. Pushkov of the Russian Academy of Sciences, rehabilitated HAARP as early as 2011. In his opinion, the Americans could disperse GPS and mobile signals using the HAARP action. However, the effect stops as soon as the installation stops working. “The fact is that HAARP is an open system and energy is quickly dissipated,” explains the scientist.

The action of climate weapons, according to Vladimir Kuznetsov, is based on an understanding of natural processes in the atmosphere. And since much remains a mystery to this day, there can be no talk about concrete developments. "Nowadays, experiments are being conducted to study the key mechanisms of nature in near-Earth space, with the help of which the geophysical environment could be controlled, but the scale of these mechanisms is planetary."