Three in a boat, not counting Poroshenko

August 27 2014
210
Yesterday, double talks were held in Minsk with the participation of V. Putin and P. Poroshenko: first, a so-called trilateral meeting took place (Ukraine - European Union - Eurasian trio represented by Russia, Belarus and Kazakhstan), and then bilateral - represented by Russia and Ukraine. The key issues of the Minsk talks should be considered the discussion of the possibility of a truce and, of course, the gas issue. The latter does not give rest not only to Ukraine and Russia, but also to the European Union. No wonder the meeting was seconded to Baroness Ashton. 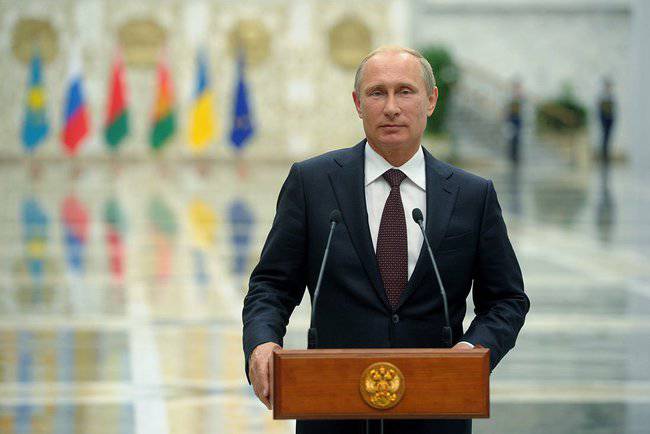 Negotiations in Minsk began in a tripartite format. The President of Kazakhstan, Nursultan Nazarbayev, the Belarusian President, Alexander Lukashenko, and Vladimir Putin, collectively represented the side number XXUMX. From side number two, EU representative for security and foreign policy Catherine Ashton, Vice-President of the European Commission and Commissioner for Energy Gunther Oettinger and Commissioner for Trade Carl de Gucht came to Minsk. Participant of the meeting number three was the Ukrainian president Petro Poroshenko.

First, we highlight the main results of the tripartite meeting.

Firstly, it is symptomatic that the "official" Kiev agreed to negotiations with the participation of intermediaries, and not some, but "Eurasian", in the spirit of "euroKiev" not close. In fact, the Customs Union in Minsk met with the European Union.

Secondly, after the talks, it became clear that the “three men in a boat” - Russia (Putin), Kazakhstan (Nazarbayev) and Belarus (Lukashenko) - were persuading Ukraine (Poroshenko) in a stalemate situation to stop the war.

“I would like to meet on a more joyful occasion than today,” the Belarusian president quotes "TVNZ". - But, unfortunately, we have to discuss issues that would seem to have remained forever in the last century. In Ukraine, the military conflict does not stop, innocent people are killed, the infrastructure of a rich region is destroyed, hundreds of thousands of refugees are forced to leave their homes. This is not a frame stories, this is reality! It's terrible that the word "war" has returned to our everyday life! "

Nursultan Nazarbayev added that the situation “has reached a critical boiling point,” and the increase in tension in Ukraine “may be dangerous for the whole world.”

Vladimir Putin, as always, was pragmatic, and explained to Ukraine what it threatens to turn back to Russia. According to him, Ukraine will lose the market of the Customs Union, and in order to go to EU standards, Kiev will have to spend 165 billion euros over 10 years. In the meantime, Russia will abolish preferences for imports from Ukraine to Russia, Belarus and Kazakhstan, and as a result, Ukraine will suffer huge economic losses.

“Such a format as the Customs Union - Ukraine, with the participation of representatives of the Eurasian Economic Commission and the EU, provides a good opportunity to discuss issues related to the consequences of the Association Agreement with the EU in Ukraine in the context of its cooperation with the States of the Customs Union,” Putin quoted the channel "RT".

Thirdly, probably feeling that the “independent” economy is heading for total collapse and that the east is against Kiev, Poroshenko put forward a curious idea: he invited Russia, Belarus and Kazakhstan to participate in a conference on the creation of a donor fund for the restoration of Donbass. Write about it "Versions" with reference to the agency "Interfax-Ukraine".

The international conference will be held in the fall. From the “invitation” itself it is clear that: 1) Kiev has neither the means nor the ability to quickly restore the Donbass; 2) Let the Russians and the European Union pay for the fact that the Donbass was destroyed by the Ukrainian army - such is the obvious message of the candy king.

Such a representative composition from Europe (Ashton, Oettinger, de Gucht), presumably, was intended to make Mr. Poroshenko understand that he already has very little to do in Ukraine, and that Europe wants to receive Russian gas without fail. Recall that in recent days, Ettinger no longer speaks of Iranian gas to replace Russian gas and sharply criticizes Kiev’s ideas about transferring Gazprom’s gas receiving points. He feels that the heating season is about to begin and that the EU will have a hard time for Eastern European countries. Suffering, for example, the same Bulgaria, trying to poke a stick in the wheels of "South Stream". In general, Ettinger seemed to understand that he was too strong in friendship with Kiev, the EU was playing against its own interests. Long understood, of course, but better late than never.

Now about the results of the bilateral meeting - Putin and Poroshenko. These negotiations were already past midnight. Their main topics were the peaceful settlement of the situation in Ukraine and economic issues, including energy.

As noted by Interfax, the Ukrainian president called the Minsk talks difficult and said that "the main goal with which we arrived in Minsk is peace."

In order to resolve the situation in the eastern regions of Ukraine, Poroshenko said in this connection, Kiev and Moscow would "immediately" begin consultations between the border agencies and the general headquarters of both countries.

“A road map will be developed on the basis of the peace plan, perhaps through a tripartite contact group we will hold consultations so as to reach the cease-fire regime as soon as possible, which will be provided by representatives of the OSCE monitoring mission,” Poroshenko said.

The Russian president, without departing from his realistic line here, gave clarifications. He said that at the bilateral meeting they discussed mechanisms for providing assistance to residents of the Lugansk and Donetsk regions, and stated that “there are already certain agreements”.

Separately, Vladimir Putin noted that Moscow cannot discuss ceasefire conditions with Kiev: “We, Russia, cannot talk about ceasefire conditions, about possible agreements between Kiev, Donetsk and Lugansk. This is the business of Ukraine itself. ” The President added: “We can only contribute to creating an atmosphere of trust in the course of this possible and, in my opinion, highly necessary negotiation process.”

The second important "agenda of the night" at the talks were economic issues.

According to Petro Poroshenko, the parties agreed to hold consultations at the expert level on the economic consequences of the creation of a free trade zone between Ukraine and the European Union. According to the Ukrainian president, consultations on energy issues with the participation of European Commissioner Ettinger and the Ministers of Fuel and Energy of Russia and Ukraine will be held on September 6.

Channel "RT"referring to RIA "News", Quotes the head of the Russian state that the energy issue is very difficult, and Russia, Ukraine and Europe are interested in its resolution.

“We have a lot of specific issues, and both Russia and Ukraine and our European partners are interested in solving these issues,” the Russian president said after bilateral talks. The president also stressed that Russia fully fulfills the conditions of gas contracts with Ukraine, but the actions of the Ukrainian Naftogaz create risks for the transit of Russian fuel to Europe.

RT clarifies that Vladimir Putin was referring to the situation when Gazprom paid an advance for the transit of gas to Europe, and Naftogaz returned the prepayment. As a result, gas deliveries from Russia to Europe “stuck”. And this question, Putin believes, requires "a painstaking researcher in the person of Russian partners, both European and Ukrainian."

The gas theme is indeed topical for Europe.

European Commissioner for Energy Ettinger, notes the same “RT”, said that Europe’s goal is “to avoid any problems in the coming months related to the security of gas supplies to all 28 EU countries, plus the states of the Western Balkans, as well as Ukraine and Moldova”. The Commissioner hopes for an "interim solution and a temporary price."

After the meeting with Putin, reports "Sight", the Ukrainian president traveled to the Ukrainian embassy in Minsk to meet with Baroness Ashton. Vladimir Putin met with Lukashenko and Nazarbayev at night and discussed with them the results of his conversation with Poroshenko.

The head of the Russian state praised the negotiations in Minsk as positive. He himself told this to journalists following the results of his working visit to Belarus. Putin's answers are given on presidential site.

To the question about the outcome of the “five-sided meeting” V. Putin said:

“In general, I assess them positively. I think that this meeting in this format was useful. I really don’t know how it will end. But in any case, we had the opportunity to once again articulate our concerns. And we agreed that we are intensifying the work of a tripartite working group consisting of Russia, Ukraine and representatives of the European Union and will try to formulate, if we can, on 12 September, if we can, proposals concerning those very concerns of Russia and the Customs Union that I mentioned. ”

As for the meeting with Poroshenko, Putin noted that an agreement was reached on the peace process, that "the contact group should resume its work as soon as possible, maybe here in Minsk." According to Putin, Russia and Ukraine agreed that "we need to resume our dialogue on energy issues, including on gas issues," and agreed that "we will resume these consultations."

Poroshenko, who ran at night to Ashton, gave a rather controversial assessment.

First, he called the negotiations "difficult and difficult." He writes about it ITAR-TASS with reference to Reuters.

Secondly, he said that a plan for a cease-fire in the south-east of Ukraine will be prepared as soon as possible.

But, let's ask ourselves, isn't this a positive outcome? And in general, what kind of "easy" negotiations a person might want if he unleashed a massacre in his country?

Guilt for civil war - entirely on Poroshenko. He could have remained in the history of the country as an ordinary oligarch, but now his hands are stained with blood. From the blood he did not wash off. And, presumably, he finally understood this, and today he is ready to pray to anyone: Ashton, Ettinger, Lukashenko, Nazarbayev, and even Putin, if only everything is somehow settled. Poroshenko himself, as it turned out, is unable to settle anything.

The only thing that remains for this “popularly elected” president is to rely on the fact that Western puppeteers, who recently learned through the UN how many people died and were injured in eastern Ukraine, and who have a heating season in their nose, will give Kiev some more money and at the same time the ability to save a “democratic” political face.

Once, at the very end of 90, analysts and economists wrote - even in textbooks on the history of economics - that Russia got hooked on a raw needle, and its destiny - to become a raw materials appendage of the West. All this is remembered, I guess. This “thesis” has become a cliché. And in the US and Europe they said that Russia was just a miserable resource-based country, totally dependent on gas and oil supplies.

After 15 years, it turned out that Russia was not a drug addict at all, but a dragdiler. And on the needle sits the West ...