Arseniy Yatsenyuk: "Russia is a nuclear country, a member of the UN Security Council. In fact, it’s a simple thief" 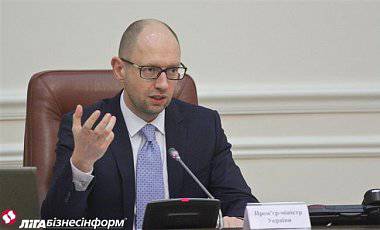 Putin convoy. If earlier the Mongol-Tatar yoke on horses jumped into Kievan Rus, now Russians call in white KamAZ trucks and tanks... The motivation is this: they expect that several cars will simply be bombed by the Russians themselves, so that the whole world can talk about the junta, which is fighting its own people. But now the whole world saw the falsehood of Russian propaganda.

The invasion of Russia. The invasion happened six months ago, when Russia stole the Crimea. They constantly supply tanks, weapon, agents. You need to call things by their proper names. Russia is an aggressor country that should be held accountable for its crimes.

Negotiations with the Russian Federation. I understand what to say. But my heart can not imagine how you can sit at the same table with them. But you need to use all the tools to stop the aggression. Russia planned aggression against Ukraine immediately after the 2004 revolution of the year. The agents were integrated into the country, they collapsed the army and the Security Service.

Allies of Ukraine. Are we able to cope with Russia? Difficult. Then you need to decide who is around us. Our allies are the USA, the EU and the G-7 countries. Need to use all the tools. We need to stop the war. We need to stop Russia.

Economy. The country is actually at war. We have a military economy. Do we have experts? Not. Thank God, 23 had no experience of war. But there was an experience of corruption, poor government and sitting on two chairs between the EU and Russia. And we have spending that we did not expect. Yesterday, the government allocated an additional 9 billion UAH to the army. We are able to protect the country. Ukraine in the war. In two years, Ukraine will enter economic development. Only need to survive. Need to stand.

The oligarchs. I demand from all Ukrainian oligarchs to realize their responsibility for the fate of Ukraine. It was time to make money. Now is the time to give money to the country. It is your duty.

Elections to the Parliament. I look forward to updating the Verkhovna Rada. Many will go with some programs. Everyone should have one program - a strong and European country. Our goal is a pro-European majority in parliament. I urge all key participants to sign an agreement to join the coalition in the next parliament even before the elections.

Association with the EU. The association agreement will be ratified by this parliament in September. I will come to the parliament and will sit there until 226 votes in favor appear on the scoreboard.

Reforms. We have cut 25 thousands of officials. Reduced spending on the maintenance of the bureaucratic system. But we need a parliamentary majority. We will reduce the number of taxes from 22 to nine. The Ukrainian public service needs to be halved, while maintaining the current level of financial support for the service. I hope this parliament will do it.

Hryvnia exchange rate. People often ask what course I see. I see a course no higher than 12 hryvnia, when the situation stabilizes. If we had not taken some steps, then the course today could be twice as bad.

Nuclear burglar. What they went down to. Our Oschadbank in the Crimea. 300 kilograms of gold and 4 billion UAH just stolen. And it seems that Russia seems to be a nuclear country, a member of the Security Council. But in fact - just a thief.

Putin's goal. The goal is not Donetsk, the goal is not Lugansk, the goal is Ukraine. They will not calm down in any way that Ukraine has chosen a direction. Our goal is Europe. We have chosen this path and we follow it. We are being punished from Moscow by anti-government protests that power will be demolished in the fall. I believe that no Ukrainian will allow this.

Terrorist freaks. What do these freaks do in the Donbass? Bomb infrastructure facilities - mines, factories, electrical networks. They bomb social objects so that we can spend billions of hryvnias on restoration. Militants have bombed a lot of mines. We are forced to consider the possibility of purchasing raw materials not only from Ukrainian mines.

About myself. For the popularity of no one is chasing. Will judge everyone история. Before me is a test that never happened. But my destiny is nothing. As part of the story - this is a split second. But what is happening in the country and with every Ukrainian? I think that we, Ukraine, first began to build our house. And when I say "we", I mean not the prime minister, but the great powerful Ukrainian nation. Now we are not a territory, but a power. Now we are not just people, but a nation. And now we have to pass the test. The cross is heavy. But we have shown to the whole world that we are capable of carrying it.