The ridge of the junta will break politely 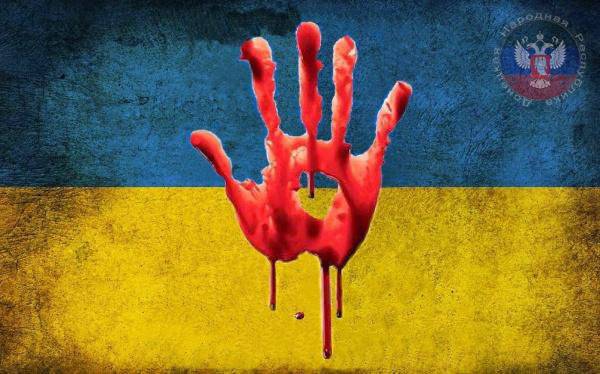 The silence of Vladimir Putin about the events in Ukraine, many marveled. Patriotic analysts rightly noted that the demonstrative restraint of the President of Russia, whom the “junta officials” of the Kiev junta curse, puts into a stupor both Bandera who received the long-awaited power in Kiev, and the cynical Washington, already tired of troll the Kremlin in the face of moronic Psaki. People who were less restrained were unhappy, and the "all-pro-fellers" wrung their hands at all about the fact that they were "everyone-minded." I generally keep quiet about the chorus of screams from the side of the Little Russian and Western space.

And the Kremlin is restrained and calm today, not paying attention to the barking, and meanwhile, events in the former Ukraine are developing rapidly and clearly not according to the scenario of Washington.

Limitroph country, failed and essentially a bankrupt, is in a state of martial law. Officially, the gangster Poroshenko, appointed by the president, does not impose martial law, although everything is clear to everyone for a long time - Ukraine mobilized, putting into operation tens of thousands of people. All of the military equipment and weapons inherited from the Soviet Union at the disposal of the junta have been thrown at the suppression of the people of Donbass. But this is not enough - the Bulgarian, Polish, Romanian and Hungarian flows to Ukraine in a continuous stream. weapon. The former Warsaw Pact countries, as a sign of Alaverdi, return to the east the weapons for the murder of the Russians who liberated these countries from 70 fascism years ago.

Ukronatsizma golem rose to his feet. Its frame, which was built brick by brick from the 19th century, was covered with stinking flesh, uneven growths, as on Yushchenko’s face. This golem rose to its full height at our current time borders and launched a conveyor that kills Russian people.

Russia scans what is happening, increasing the help of the militia. Not once or twice, the Kremlin made it clear that there would be no direct troops entering the Donbass, but it still uses the successful formula for helping the militia and all the inhabitants of Novorossia who voted for the May referendum for life in a country free of ukronatsizma. Volunteers flock to the defending Donbass from around the world.

Punishers rush to Donetsk, surrounding him and striking at the children's regional hospital, shopping centers, factories and mines. In the sight - the maternity hospital and bakery, home of children's creativity and water towers. Punishers instantly kill people right on the streets, like a young mother with a one-year-old daughter in Gorlovka, like a girl in the 6 month of pregnancy in Donetsk, like children twisted by explosions into a spiral in Zugres ...

Vilna Ukraine? Tse europa? Everything, we bury this Ukraine together with its moronic maydauns, false officers and minced infantry - cannon fodder. They are recruited from a whole generation, grown after the collapse of the USSR and brought up in the spirit of sharp rejection of Russia and Russians. Now in Russia, they see the enemy, and in its president - the culprit of all the troubles of their unfinished, or rather, converted homeland.

But everything must be answered at the judgment of the Most High, and often here, in this mortal world. For the wildest Russophobia will have to pay, because it is Nazism, Panov dill, the former Russian ... Unworthy to exist similar structures on the planet, especially at the temporary administrative borders of Russia. The idiots from Russophobia do not just do not need Russia. She will not allow the growth of this cloaca and crush it along with the gray matter of the Cardinals of the Maidan or with what they have tucked in instead of brains.

There is no forgiveness of the junta and all its minions who sold themselves to the West in the bud. Look carefully at their manners, behavior, study their motivation, morals - nicknames with signs of debilisation on the face, hysterical cocaine tymoshenkas, powdered puff-rolls swollen from drunkenness, lyder homosexuals; protruding mandibles, technical Yatsenyuk russophobes, etc. ...

This is a panopticon. They should be shown for money in a cage together with a mustache from Austria called Conchita-sausage, and hauled through the booths of agonizing Europe. The funds raised on this dazzling show, let them go to prosthetic devices for crippled amputees who have lost arms and legs “on the eastern fronts”, asking for alms in Kiev ...

The states where the third place is taken by a man named “Olezhka - in the mouths of brav” does not exist, it is a fiction, a misunderstanding. This is such a fake country, for which its fiery rain is prepared in the image of Sodom and Gomorrah. For the voluntary choice of perverts in power, Ukrainians will still be full of money. Now only the first series is in full swing. What will be the female howl in the farms of Ukraine?

The bloodshed in the expanses of Little Russia unleashed the West with the hands of geeks, their agents, moral and physical perverts. Today they kerut (command) in the open spaces of Little Russia, conducting with greasy fingers like a stream from a sip of cattle: “To Moskalyaku - to Gilyak! Moskal - on knives! ”They rage in their pathological dance, then building“ turtles ”, like orcs from“ The Lord of the Rings ”, then they swarm, wrinkling like the demons of“ Viya ”. And the little girl is really a terrible, wrinkled old woman who will not even be taken to Europe to wash the crap pots in hospices.

The name of this old woman is Ukraine.

... In distant America, more than half do not know where Slavyansk is, where mines Ukrainian soldiers killed 5-6-year-old children under the shouts of "Glory to Ukraine!" In America, split by race, now negros are fighting for their rights, revenging themselves on white for centuries-old segregation. In America, they relish the homosexual details of the youth of their first black president, the amoeba. America does not care about Ukraine. Is that throw a couple of guns McCain beg the Congress and the administration.

But do not spit on Ukraine, Russia, Moscow, Russian, Tatars, Chechens, Buryats, Yakuts and other peoples of the great mighty country, which stands on its feet during a period of great trials. We will win and crush Nazism in Ukraine. Its inhabitants who voted for Sodom will be very, very ashamed of themselves in the very near future.

But the Lord is merciful! And calm and order will come on this part of the land, which is called Little Russia, but only after admonishing and correcting apostates-traitors. On the right path will guide the polite people. “Everything will be fine, it will be fine!” Ukrainians, it is about this scenario that the song about polite people is sung. Today, the good half of Russia, if not more, are ready to become Donbass militias in the truest sense of the word.

Only polite people are able to protect the people of the Russian world of Donbass and the whole of Little Russia, the world that Brzezinski is so afraid of. It is not by chance that NATO is already panicking, declaring that it is necessary to be able to fight with an adversary without insignia on military uniform. So we are on the road to victory.