Arab Spring and the position of Russia ("Eurasia Review", Spain) 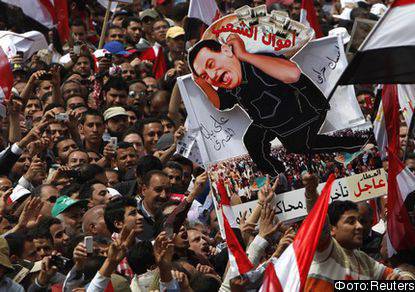 Now that the Arab Spring — a series of uprisings sweeping the countries of the Middle East and North Africa — lasts until mid-summer, it is important to see how Russia responds and reacts to the developments of its closest partners, Libya and Syria, and what could happen next.


Obviously, Russia today is deeply interested in how the situation with the uprisings unfolds and what is happening with the influence of Moscow in this region. Although Russia's relations in the Middle East cannot be compared with the situation in the Soviet era, due to the fact that the Kremlin is a permanent member of the UN Security Council and a member of the Middle East Quartet, Moscow still plays a crucial role here. The Kremlin does not hide its still suspicious attitude to the political domination of the West in the face of the United States of America and its allies. Russia has important and very profitable ties in energy and trade weapons with this region, especially with Libya and Syria.

Russia regards the current NATO operation in Libya as the beginning of the expansion of NATO to the south, in the same way as Moscow refers to the inclusion of Poland and the Baltic countries into NATO in the last twenty years. In June, the Russian ambassador to NATO, Dmitry Rogozin, 2011, said that the conflict was “internal”, and added that the participation of third countries in it could pose a threat to regional security. He described the situation in this North African country as “a civil war complicated by tribal tensions.” Moscow said it was ready to be present at the negotiations to reach a peace agreement. The special representative in the region of the Russian president, Mikhail Margelov, who was a Soviet KGB officer in Soviet times and worked as a translator at the TASS agency, and now special representative of the Russian president for cooperation with African countries, met with Libyan Prime Minister Baghdadi Mahmoudi and Foreign Minister Abdul Ati- Al-Obeidi. Russia's political position is that consultation with the people of Libyan leader Muammar Gaddafi is a necessary stage on the path to resolving the conflict. Margelov, who also met with opponents of Gaddafi, said that they want the current ruler to leave his post and his family be excluded from the decision-making system in the field of economics. Margelov argued that the Libyan opposition could accept the prospect of Gaddafi living in Libya after giving up power, thanks to their "tradition of forgiveness and reconciliation."

The impasse, which the military situation in Libya has gone into, and diplomatic ambiguity in condemning Syria’s actions have created for Russia the opportunity to position itself in the Middle East as “non-NATO”. This nickname is intended to emphasize how far the Kremlin is apart from the position of the US and NATO regarding what is happening in Libya and in Syria. Slowly but persistently spreading violence in Syria causes Moscow’s deep concern, and therefore the Kremlin is trying to penetrate this region in a new guise. Syria was one of the important clients of the Kremlin during the Soviet era, and most of its weapons arsenal is Russian-made. At the same time, Moscow wants to maintain the image of a major power, which stands in the position of non-intervention, in order to be able to guarantee and promote Russian economic interests in the region. And now the image of a power opposing interference in the affairs of Syria (like Libya) from the outside is very suitable for it.

Moscow’s reasons for not interfering in Syria’s internal affairs seem to be similar to those of its opposition to NATO’s military operations in Libya. In June, 2011, the deputy representative of Russia to the UN, Alexander Pankin, stated that “the main, from our point of view, is that the current situation in Syria, despite increasing tensions and confrontation, does not pose a threat to international peace and security. It is impossible to dismiss the fact that the source of violence is not exclusively one of the parties. From our point of view, a real threat to security in the region can be external intervention in the internal situation in Syria, including attempts to impose ready-made decisions or take one or the other side. ”

Moscow is already trying to prevent active US actions against the Assad regime in Syria, and prompts Assad to carry out reforms that strengthen his power rather than just resort to force, which could only provoke opposition from the West and increase the likelihood of a tough one-sided reaction of the West. Since Syria is a long-time client and a major buyer of weapons from Russia, Assad’s brutality and its direct consequence of increased Western pressure potentially weakens its partner for Russia. From the Russian point of view, this action contributes to the unilateral consolidation of the Middle East under the influence of the United States and the West (potentially under democratic patronage), which may also overlap in Russian territories.

The recent demonstrative burning of Russian flags, along with the flags of Iran and Hezbollah, shows unequivocally how outrageously protesters look at Russia's non-NATO policy. Anti-Russian antics is a message to the Russian leadership about the need for freedom. Practically at the same time as these anti-Russian acts took place, the protesters threw roses at the feet of the US ambassador in the Syrian city of Hama. These acts could have been a painful blow for the Kremlin, because recently the Russian flags are burning in Ukraine, Georgia, and Kyrgyzstan, and, if we recall in Soviet times, in Afghanistan. Moscow should have been shocked that Russia, represented by demonstrators opposing Assad, was lumped together with Hezbollah, whereas they are treated with great respect by the United States.

There are many different sources of concern that the Kremlin will have to face. First, Russia's foreign policy establishment is beginning to look like a battlefield, because the country's top officials are sending clearly conflicting signals about what position Moscow is taking with respect to the unrest that has swept Libya and Syria. Russian leaders are working to protect the strategic goals of Moscow in this region. But during this process, obvious political differences openly manifest, and some analysts are inclined to closer diplomatic ties with the West, while others encourage Russia to ignore the Western viewpoint and be more aggressive in defending the interests of the Kremlin (reviving the old dispute between Westernizers and Slavophiles). This dispute will clearly become a touchstone during the election campaign of Russian President Dmitry Medvedev in 2012.

Secondly, the Kremlin sees in the possible fall of the old order in Libya and Syria the “victory” of the West. No less disturbing is the imagination of Russian analysts and policy makers of the possible growth of Islamist regimes, who see Russia as their target. Russia is already talking about giving self-government to the states of the North Caucasus (mainly Dagestan, Ingushetia and Chechnya), and this Kremlin gesture may attract the attention of Islamists, who may come to power in Libya and Syria. These Islamists (i.e., those associated with Chechen rebels and with al-Qaida groups), while not abusing violence, can renew their ties with their fellows in the North Caucasus. Just look at the vast Circassian fraternity in Syria, which may want to update and strengthen relations with its closest northern neighbors.

Finally, there is an impact on the Russian defense industry. Russia may lose to 10 the billions of dollars it receives from arms deals from Libya and Syria. The fall of Gaddafi would put an end to sales plans for the next five years of armaments by at least four billion dollars. Russian sources say that the disappearance of the Libyan market itself would be a great loss. Russian deals with Syria can also be badly damaged, and the Kremlin may think about the possibility of “resetting” its arms sales to maintain high profits. This means that Rosoboronexport, a Russian arms trading company, will seek to sell more weapons to customers from other parts of the Middle East, especially the states that are members of the Gulf Cooperation Council. Russia's efforts to restore the port of Tartus in Syria can turn into a complete loss. The Kremlin wanted to have a base here for accommodating heavy warships after the 2012 of the year, but this may not happen if you consider the ongoing political situation in Syria. The potential for Russia to lose Tartus could force the Kremlin to return to its goals of creating a naval base in the Eastern Mediterranean.

Overall, the successes of Russian foreign policy in the Middle East, observed in the 2007-1010 period of the year, are likely to suffer significantly. The Kremlin’s enhanced aspiration, in the situation of transforming Libya and Syria, to strengthen its relations with the countries of the Gulf Cooperation Council, will affect Russia's attempts to create a “north-south corridor” between the Gulf region and Russia. Under any new Libyan government, Russia will need even closer ties with Qatar and the United Arab Emirates, due to the close ties of Doha and Abu Dhabi with Libyan rebels. The current gap in this area, characterized by a lack of mutual understanding and a very careful rapprochement between Russia and the countries of the Gulf Cooperation Council, will need new substantiation as the market situation and political realities form the new landscape.

We are in Yandex Zen
A great interview with Sergey Lavrov: about Ukraine, Obama and Iran
What you didn't want to know about England
Add a comment
Information
Dear reader, to leave comments on the publication, you must to register.