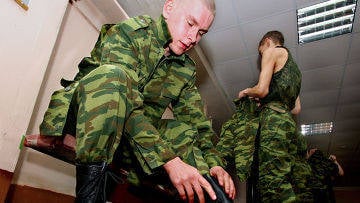 The military recruitment model used by the Russian armed forces is irrational and unacceptable, and the country's military planners will have to either call for older people and cancel exceptions for conscription, or hire more professional soldiers in the future. The latter is more preferable, given that experienced privates will be needed to work with sophisticated weapons systems that the Russian military are planning to acquire in the next decade.


“The Ministry of Defense fulfilled the draft plan,” proclaimed the Deputy Chief of the General Staff of the Russian Armed Forces, Colonel-General Vasily Smirnov, at a press conference in January, which announced the last conscription campaign last fall.

But while military planners have managed to recruit the recruited number of recruits over the past few years, this task will become increasingly difficult, forcing the General Staff and the Ministry of Defense, who are planning an appeal for the Russian military and several other branches of service, to make a difficult but necessary choice. .

This year in Russia there will be 11,6 million men of military age, i.e. from 18 to 27 years, according to the Federal State Statistics Service (Rosstat), according to its demographic forecast for 2011 year. Excluding those who will be declared unfit for service, as well as those who use deferments due to training at institutes, and those who fail to be drafted, it is estimated that there will still be approximately 1,7 million men who can be called up to serve in Russia in 2011 year.

However, in reality, the majority of recruits are recruited from among eighteen-year-olds and those who have already graduated from high school but have not yet entered the institute. Older potential recruits in most cases have already taken advantage of delays due to education or have been released for health reasons or other delays. In fact, 18-year-olds make up roughly 70% of those called into the Russian armed forces and other troops, according to calculations published in 2007 in the Independent Military Review edition by Vladimir Yevseyev, Lead Researcher at the Institute for World Economy and International Relations (IMEMO) Russian Academy of Sciences (RAS).

The Department of Defense needs to call on 660 000 recruits to complete the staff reforming process, according to which the strength of the armed forces should be one million people, including 100-120 thousands of professional military personnel and 220 000 officers, to 2012 year. If we add to this the recruits recruited for service in other troops and "law enforcement agencies", which, in my estimation, will need approximately 80 thousands of recruits, it turns out that in 2011, 740 people should be called upon.

If we calculate that 70% of these recruits are eighteen years old, as it was in the past, then it turns out that in 2011, 518 000 men of this age should be called upon. This means that almost all of the 570 000 Russian healthy 18-year-olds will have to be drafted into the armed forces according to the current draft model. But as noted above, a significant proportion of them will go to state universities, which will make them inaccessible for recruiting. As a result, the lack of young recruits may begin to be felt already this year.

Some of the “law enforcement agencies” are already suffering from this shortage. For example, the internal troops of the Ministry of the Interior asked the General Staff, which manages the call for both the Internal Troops and the Ministry of Defense, the Ministry of Emergency Situations and the Federal Agency for Special Construction, to call on 2010 27 thousands of new recruits in the fall and winter 18,5 of the year only XNUMX of thousands of people joined, Interfax reported in January, citing sources.

Moreover, Russian military recruiters are forced to plug the ever-growing holes in the lists of draftees, and because the population of Russia is simultaneously decreasing and aging. In 2011, 18 855 will be only 10 years old (a third of them are always considered unfit for military service), which is 865% less than in 34,5, according to Rosstat forecasts for the 2002 year and the last no census yet). And this decline, apparently, will only accelerate, despite the efforts of the government to stimulate fertility through bonuses and other measures, say military experts and demographers.

FSGS (Rosstat) predicts that Russia's population will continue to decrease, and the rate of this decrease will increase. In 2016, Russia's population will decline by 24 000 people, but by 2028 the rate of decline will be 325 000 people per year, despite the continuing influx of migrants from neighboring countries, according to the average forecast version of the Service for 2011-2023 years. The merging of these negative trends requires Russian military planners to take action in order to avoid future difficulties with the call.

To prevent shortages, military planners have the opportunity to choose from several options, including: expanding the list of potential recruits by canceling the existing extensive delays and exemptions; calling older people and increasing the upper limit of draft age; and an increase in the number of contract soldiers in the Russian army. Finally, the last and most radical and potent opportunity is the option to reduce the number of personnel of the armed forces and other troops.

At the moment, the Ministry of Defense appears to be leaning towards the option of expanding the military base through changes in the legal and regulatory framework. In order to get a larger number of conscripts, the Ministry of Defense is lobbying for a decrease in draft abilities for other "security agencies" that have troops and are recruiting recruits. This makes sense, since the presence of units recruited from recruits in such state structures as, for example, the Federal Agency for Special Construction increasingly looks like an obsolete legacy of the militarized Soviet past.

The ministry is also promoting an increase in the upper level of military age to 30 years and the abolition of a number of deferments, including at least half of the delays for students at public universities. Such an approach could help prevent a shortage if the federal and regional authorities can really achieve the implementation of these decisions, which can be difficult, given that they are aimed at the older age group. And the often observed antipathy to military service and unwillingness to serve will not disappear anywhere until the troops get rid of hazing, because of which dozens of draftees are killed and maimed every year in Russia.

Ultimately, even a further expansion of the military base, coupled with the planned reduction of the term of military service from two to one year, will not be a panacea.

The Russian conventional armed forces are seriously lagging behind the armed forces of America and the Western countries as a whole, which went through the military revolution and climbed to a qualitatively new level, acquiring all-weather weaponwhich works effectively day and night, satellite navigation and guidance systems, for example. To catch up with competitors, as Defense Minister Anatoly Serdyukov announced in September 2010, his department plans to spend 613 billions of dollars on logistics in the next decade to bring the share of modern equipment in its arsenal from 10% in 2010 to 70% in 2020 . However, the question is whether 18-year-old recruits, the vast majority of whom do not have higher education, can cope with managing such complex systems or even keep them in working order.

Obviously, a negative response to this question should force Russian military strategists to ponder the question of how they can attract more professional soldiers to work with high-precision conventional weapons, guidance and orientation systems they plan to acquire, and how these professionals will be able to compensate for the relative shortage of troops in the largest country of the world.

Despite statements by Russian generals that the Russian armed forces cannot attract more professional soldiers due to lack of funding, the reality can and should be completely different. Prior to the key reform of the officer corps in 2008, the defense department was able to pay cash allowances to 350 thousand officers. Planned reductions in the officer corps, which should affect 130 people, should free up enough money to hire a similar or even more additional professional military, plus ordinary ordinary soldiers. The Ministry of Defense may continue to reduce the ranks of the officers, leaving about two hundred thousand officers in the service. Indeed, in Russia it is one of the highest ratios of the number of officers to the number of soldiers in the world, in the country there are two officers for every seven soldiers, for example, in the American army this ratio is 1 to 6, and in the American navy - 1 to 5.

Already moving away from the mass mobilization model, Russian military reformers must now complete the transition to modern armed forces that are sufficiently educated and experienced to deal with modern weapons required for a quick and effective response to military and security threats, such as local armed conflicts, mass rebel raids or explosions in neighboring states. What about deterrence in the case of (hypothetical) large-scale wars? Russia still has more than enough nuclear weapons to discourage any other country in the world or an alliance of countries from even thinking about a similar perspective.

We are in Yandex Zen
The world we leave, the world we enter, and the world between them
Military reform as an integral part of the security concept of the Russian Federation: Systematic dynamic assessment
5 comments
Information
Dear reader, to leave comments on the publication, you must to register.