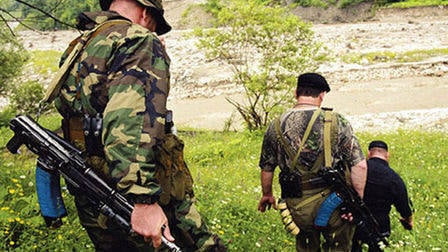 Today, the Russian government must recognize that despite all the allegations of restoring order and stabilizing the situation in the North Caucasus, the problem is not only not solved, but on the contrary, the escalation of military confrontation is only growing. If at the end of the 90-s of the last century and the first years of the new, the fight in the Caucasus region was exclusively about Chechnya, today there is no less uneasy and tense situation in other republics - Dagestan, Ingushetia, and South Ossetia. If today the North Caucasus is figuratively depicted on the world map, then the best symbol will be a powder keg with a slowly burning wick. It is safe to say that until the stabilization of the situation in the region is still very far away and the confirmation of this is the recent events in Dagestan.


The sorties of extremists in this republic, which not so long ago were sabotage and constant attacks on the security forces, turned into large-scale military operations, which are carried out under religious banners and relevant calls. In the north of Dagestan from June 21 to 23, the forces of special forces of the Ministry of Internal Affairs and the FSB, together with units of the Russian Ministry of Defense, supported by tanks and the helicopters did not manage to cope with a group of militants, which was dug in the lowland villages of the Kizlyar district.

At the beginning of last week, two clashes occurred in Dagestan, in which security forces were confronted by gangs of at least 30 men. And already on June 23, a large group was blocked near the village of Kuznetsovka, Kizlyar District. Personnel of special firing groups, the Crocodile Mi-24 helicopters, and T-90 tanks were pulled to the indicated place from the regional departments of Kizlyar, Babayurt, Nogai and Tarumovsky regions, as well as from neighboring Chechnya. The staff of the Special Purpose Center of the UFSB and the Ministry of Internal Affairs of the Russian Federation, who unsuccessfully attacked the positions of the militants, needed their support. The village turned into a real impregnable fort with underground passages, trenches, sighting zones.

Infused forces — roughly 3 thousands of people — smashed the 2 battle zone of the day. Militants stormed from the air (more than fifty sorties per day) and heavy equipment. When night fell, the operation stopped and the militants took advantage of this, who, under the cover of the third night of the confrontation, were able to break through the encirclement and hide in the forest. The most amazing thing is that during the whole time in the dark the observation of the militants' positions was carried out with the help of thermal imagers, but for the inexplicable reason they did not work that night.

The search for fugitives organized with dawn brought no positive result. During the shelling of the fortifications, 5 was destroyed by extremists, but only two bodies were found during the territory survey. The losses of the government troops were more significant - seven soldiers were killed and 16 were injured of varying severity.

According to preliminary data, the security forces were confronted by a group consisting of 20-30 extremists led by the head of the Kizlyar sabotage gang Ahmed Idrisov, who in 2009 was able to unite representatives from various regions of Dagestan under his command.

The situation in the region has been heating up for two years now. Only in June, 2011, more than 40 suspected participants, as well as accomplices of extremists, were detained here. On the territory of Dagestan, or rather, in Kizlyar and Tarumovsky regions, the Terek Cossacks are the main population, and the escalation of tension in this zone will lead to a significant outflow of approximately 80-90 thousand Russians from the republic.

It is absolutely obvious that tensions in the republic are growing. In the underground there are more than a thousand militants actively participating in attacks on civilian objects and representatives of power structures, several thousand hidden, 10-ki thousand accomplices and expressing sympathy. And it is not clear how the Kremlin is going to ensure the safety of the population of the region and the state, given the weakness that was demonstrated during the three-day confrontation with a small group of militants. How could it happen that the militants were able to settle on the territory of the flat villages of the north of the republic and gave a lesson to selected anti-terror units? On the eve of the Olympics in Sochi, this situation can not but alarm.

An equally dangerous situation has developed in Ingushetia. Despite the fact that for almost a year now, the situation in the republic has stabilized. Today, the leadership of Ingushetia and all the security forces do not exclude the possibility of activating the militants in the near future. After all, the strongest blow for the entire time of the escalation of the military confrontation against the militants was dealt precisely here - at the end of March 2010 as a result of a point strike by forces aviation 25 militants were destroyed at once in the village of Upper Alkun. In Nazran - the largest city in Ingushetia - there are roadblocks on the federal road. In the center of Nazran, there is a vivid reminder of the militants - the police headquarters, which is burnt, with huge holes in the windows. Recall that in the fall of 2009, a Gazelle drove up to the building of the Central Internal Affairs Directorate, stuffed with a deadly load of 80 kilograms of TNT. It was hellish greetings from the organizer of this attack, and now the late Said Buryatsky.

Today, militants in Ingushetia have changed tactics. Previously, they could easily be calculated by beard and excessive religiosity. Now, according to law enforcement officers, everything is different. In order not to attract special attention, they began to disguise themselves as ordinary people. Obviously, therefore, the well-known terrorist who previously occupied the place of the “Amir” of the Ingush Jamaat Magas, better known as Ali Taziev, managed to live peacefully in the republic for two years, rent an apartment, and later a private house, ride a fictitious passport in the name of gr. Gorbakov in Kislovodsk and at the same time actively pursue terrorist activities.

To characterize the situation in the region of the North Caucasus, especially in Dagestan, it is especially important to note that the danger does not come only from the fact that several hundred people started an armed struggle, carry out attacks on government representatives, terrorist acts directed against the civilian population. The main danger lies in the fact that they are supported by a significant part of the local population. Without a change in such sentiments, attempts to completely destroy extremist Islamists will be in vain.

It is necessary for everyone who is fighting for the stabilization of the situation in the North Caucasus to understand that the struggle will be long and far from being limited to the physical elimination of the ringleaders of the gangster formations. The continuation of forceful suppression of militants must be combined with other measures, one of which is the socio-economic development of the weak republics of the region in this regard. Even the initial stage of building production infrastructure creates a favorable environment, which should be used to the maximum. We are talking about the arrival in the North Caucasus of professional, highly qualified specialists from other regions of Russia, their joint work with local youth representatives, who need to be specially involved in the construction of these facilities, on the large-scale training of local specialists for subsequent work in the constructed enterprises.

Along with the construction of huge production facilities, increasing attention should be paid to supporting the inexhaustible "Caucasian spirit of enterprise": the formation of a network of small enterprises, rural cooperatives, tourism services, etc.

One of the measures to stabilize the political and social situation in the North Caucasus may be to encourage the migration of local residents to other regions of the Russian Federation. Of course, on a limited and organized scale, this may well bring a positive result. But, at the same time, there is a real danger of exacerbation of the political situation in those regions where migrants will rush.

The struggle for the North Caucasus leads to casualties among Russians from terrorist acts that are carried out in Moscow and other Russian cities. This is the hardest and exorbitant price, but it has to be paid until such time as it is possible to radically change the situation in the North Caucasus region. There is no alternative. The North Caucasus was and will remain an indivisible part of the Russian Federation.

We are in Yandex Zen
The fight against terrorism. An inside look (blog of Ingushetia special forces)
Will the Russian army carry out a general cleaning in the North Caucasus?
71 comment
Information
Dear reader, to leave comments on the publication, you must to register.