AK-47: a weapon for an uncompromising struggle 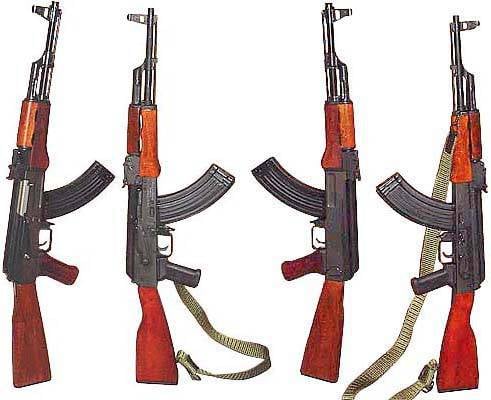 AK-47 is one of the most popular and easily recognizable firearm profile weapons in the world. Over 50 armies and countless resistance movements use this weapon. Since its inception in 1947, over 50 has been produced over a million AK machines.

The AK-47 is effective at distances of 300 meters, and its accuracy can be increased by placing optics.

Another feature of the rifle are its large volume stores. Their volume from 5 to 45 cartridges. There are even round drums for a rifle with 75 cartridges.

Up until the recent election, AK could be bought for less than 500 dollars. They can still be purchased at this price, but now for such a cost they are much more difficult to find. Now, to buy AK in good quality, you should count on the price tag in 700 and more dollars. You can search for them to purchase at gun shows, gun shops or pawnshops. You can also view local ads, maybe someone is selling this rifle.

Ammunition for a rifle was widely available until recently. For those whose budget does not allow the acquisition of the AK-47, there is another rifle called the SKS, which shoots the same ammunition as the AK. SKS has some drawbacks compared to AK, but overall it is an excellent weapon. You can also think about Mosin-Nagant rifles - these rifles can be purchased in good condition for only 120 dollars.

The key is finding the right dealers for rifles and ammunition, and compare quality and prices among sellers.

I purchased one of these amazing machines about 5 years ago, and I can say that the weapon is excellent for any purpose and season.

Weapons are easy to clean, ammunition is cheap, and the 40 magazine will be enough ammunition for hitting the target.

The big surprise was that the rifle was surprisingly accurate.

The video is a little deceiving. I don’t know how this guy never managed to hit the target. I am sure that AR is much more accurate (i.e. M-16; note mixednews) - but I tested my Saiga 7.62 × 39 at a distance of ~ 150 meters, and I can say that the weapon is quite accurate for myself.

It is also worth noting that any version of AK is much, much more reliable than AR.

And the moment with pieces of wood ... I saw how even because of the foliage and branches .223 deviated or even scattered into parts (i.e. cartridges of caliber 5.56 mm for M-16; approx. Mixednews)

I have an AK variant for 7.6 × 39 and 223 (5.56) ammunition. The 7.62 ammo is heavier, it has more stopping power. The benefits of 223 ammunition can be seen on the battlefield. They use steel sheath or brass. If precision is needed, Dragunov (900-1200 dollars) with powerful optics uses 7.62 × 59 ammunition and brings chaos into the enemy’s camp. Its principle and reliability are similar to AK, but it uses less roomy stores.

7.62 × 39 cartridges were developed for positional warfare with 5-10 shots per infantryman. They are completely unsuitable for an assault rifle, because you have to haul a combat kit from 4 stores (120 ammunition), which can be shot in 12 seconds while maintaining automatic fire.

I know that a squad could tarnish an 6-inch brick wall, but this is not what is expected of an assault rifle.

I just can not justify the use of a rifle assembled on the basis of ammunition of a potential enemy. .223 wherever the US Army, AR, anywhere, so that even during martial law or a revolution you can easily find weapons and ammunition.

DO NOT BELIEVE ANYONE !!! EXCEPT OF ITS KALASHNIKOV !!!

I summarize. Different ammunition for different uses. I live in Florida, and here the branches are thick and have a lot of leaves. For me, AK with its patrons are ideal, given the environment. However, in more open spaces, more accurate AR W / .556 or his older brother 7.62X51 NATO (.308) would obviously be the best choice.

AK-47-s, reliable, easy to clean, but why would you need it in the bankrupt United States of Israel ???

AK-47 is definitely more reliable than anything that is based on an AR or SKS platform. I like SKS, it's just not that safe ... even with a fuse. An AR with 5.56 NATO ammunition will be much more accurate over the long haul, yes. But as you can see on the video, 7.62 (close to the American .308, Russian 7.62 rather .311) breaks through the wooden block. If I need to fire a hundred yards, I will not use my assault rifle, I will take SKS and AK-47 ... I also have a hunting rifle. Which is currently the Springfield 1903.

Advantages and disadvantages of 5.56 compared to 7.62

Advantages: easier; they can carry more.

Advantages: the speed of the ammunition is greater; Energy = Mass times the square of speed

Disadvantages: higher gas pressure means a tighter spring is needed; This increases the likelihood of having a liner snack that is harder to dispose of.

Disadvantages: lighter ammunition is much more likely to deflect or collapse when confronted with foliage or masonry.

AKs are excellent rifles, and the 7.62 × 39 is a fairly good ammunition, but armor manufacturers are developing their own armor, focusing on 7.62 ammunition.

So many AK-47 in the USA, and still no popular uprisings?

We are in Yandex Zen
Commentary on A. Petrov's interview “Fire and Tactics in the Russian Army: Another Look”
Conveyor conveyor
6 comments
Information
Dear reader, to leave comments on the publication, you must to register.