July 4 2011
6
- Hello! Hello general. Listen, this is such a thing ... The Baltic states and Georgians do not want to separate. You Tanks enter the Baltic states. Well, pull the muzzle at their nose to piss off to the referendum. And there is still work for you. I will organize a demonstration in Tbilisi for some reason, and you will organize the shooting of demonstrators. Why, you ask? You are an officer, your mother! Orders are not discussed, but executed! How do you understand? Well, that's good. And do not forget that orders come from us ... Well, do you understand? Well, from the one who unfastens greens on our accounts. You fired those three officers discussing orders there? Well done! In their place I will send verified. Bye, servant. 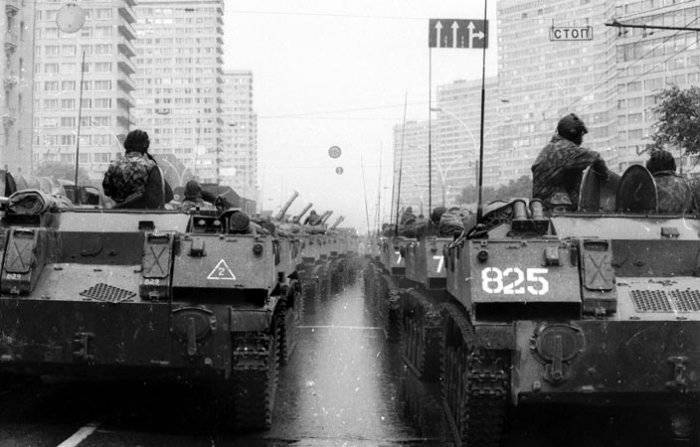 - Hello! Hi, Polk! How's it going? In short, you screw up your officers in the Ministry of Internal Affairs. Well, we're going to lower state-owned enterprises to zero cost, so that we can shove them into our pockets. People may be worried, of course. Well, old fart with poster on the streets will come out. But this is not a problem. The problem will begin if the officers of the KGB and the Ministry of Internal Affairs think not to carry out the orders, but to discuss them. Well, you understand. Yes, do not drift, you, too, the plant will allocate and unfasten green according to the ranking. Well, be sure.

- Hello! How are you, love? Where are you now? In the building of the Russian parliament? Wow! What are you doing there? Household question? Clear. Well, I'm fine. Yesterday they assigned the title of Starley for the fact that I did not discuss the orders, but executed them. Yes, I am a good soldier. By the way, I'm not far from here, I'm sitting in a tank. I am waiting for the order. Oh, they sent an order. No, I can not read out loud - a military secret. You blink, love, and I'll call you back in a couple of minutes.

- Hello Hello! Damn, avtoatvetchik ... Well, if the armor-piercing did not get into the phone, then maybe the favorite did not hurt.

- Hello, mother, hello! Did you walk around the parliament building today? Not? It's good. No, I could not warn before. It was a military secret. I do not discuss the orders, but execute them. What? How does our dear president feel? Feels normal. Nearby here thumps, thanks for our service. No, Mom. Yes, I am not a dog serving, but an officer who does not discuss the orders ... Well, that's all for now. Borsch warm, I will come soon.

- Hello, Swan? Hi your mother! Listen, my friend, you fly to Chechnya right now. Well, there a problem appeared - the Chechens from Grozny were driven into the woods. Not even an hour the war will die out. This is how much dough we lose! You withdraw troops from Grozny. Yeah, get the order out. And when the militants return to the city, then let everything begin as it was. Well, you understand. And let there aviation bomb their banks. We will decorate then a couple of billions as burnt. What? Will the officers rebel? So you remind them, bitches, that orders are not discussed, but carried out. You, Swan, answer me directly - for whom are you? Do you feel sorry for Chechens and Russians? Don't you feel sorry for me? Do you know how they put pressure on me from all sides? Yesterday, a transcendental adviser left Yeltsin as evil as hell. Well, Grachev also fell for the capture of Grozny. Well, do you understand everything? Well done. Do it.

- Hello! Yes it's me! You are stunned - by the voice will not know! So, - remove the nationality of peoples from passports. Let there be one nationality - the Russians. Let in another 15-20 of millions from neighboring countries. Mix them with the indigenous to reduce the possibility of unity of the indigenous. The police should be renamed the police, the Zhiguli the Mercedes, and the Chinese should be declared Russians who came from Kazakhstan to their native Far East. Dissimilar, you say? And tell me that for a long time living in Kazakhstan, the eyes of the Russians narrowed ... In short, follow the order, but do not discuss!

This is not a call for a coup or for the government to resist in an illegal way. This is a call to action, in accordance with the fulfillment of the officer's duty to defend the fatherland from internal and external enemies. We have the legal right to investigate the actions of Kremlin employees and lower persons. It is the workers. And the president is an employee. And even Chubais. The “untouchable” person can only be considered a thief whose immunity is “legitimized” by a thief. It is necessary to investigate the circumstances of the plundering of Russia for the period from the beginning of the nineties to this day. The head of the investigation department should be persons appointed by the Officer’s Cabinet of the Fatherland (JCE). Russian officers have the right to create such an elected office. So create, in spite of the screeching higher. Elect reliable officers to the JCE. The term of work in the office is two years, after which you should return to your units. Each year, 50 returns to the units of the JCE, and the second half works with newcomers and returns to its units a year later. The JCE must have access to any branch of government, including the cabinet of the President of the Russian Federation. The main task of the work of the JCE is to identify the causes and conditions of violations of the law. The right to create an OKO is given by the people of the Russian Federation and the officers' duty to the fatherland. Those who will interfere are the enemies of Russia, because the specificity of the current control against traitors and thieves has not justified itself.

We are in Yandex Zen
Dmitry Puchkov: You can’t defeat someone’s propaganda - organize and lead your own.
Tskhinval: a chronicle of destruction
6 comments
Information
Dear reader, to leave comments on the publication, you must to register.