In the United States ended the international exercises "Frucus-2011" 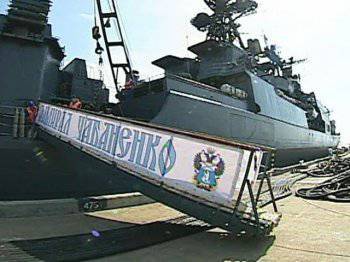 Off the Atlantic coast of the USA, the Frucus-2011 naval exercises were completed, in which the United States, Russia, Great Britain and France took part. Crews practiced readiness to cooperate quickly and smoothly during peacekeeping operations as part of international forces. Our country was represented at the exercises by the large anti-submarine ship Admiral Chabanenko.


Russia, France, the United Kingdom and the United States 10 days conduct joint maneuvers in the place where the Chesapeake Bay overlooks the Atlantic Ocean off the coast of Virginia. Let these exercises not be competitive, seafarers cannot suppress the spirit of rivalry, for example, when firing from artillery installations. The task is formulated by the receiving American side: when shooting at a dummy of an enemy ship, direct hits should be avoided, but Russian sailors were not ready to shoot past the target.

"When shooting from a small caliber weapons the rest of the ships failed to open fire on the target, as we hit it. We shot at destruction, so the rest of the exercise participants shot at its debris, "says second-rank captain Gennady Sizov.
The large anti-submarine ship "Admiral Chabanenko", the American destroyer, the British and French frigates go out into the ocean. Subject doctrines: the fight against piracy. In the course of the exercise, it will become clear how to find a common language with a sight, if you have to speak with one voice against the Somali pirates.

“I thought there would be a lot of difficulties, because our four ships never interacted together. I expected that it would be difficult for us to understand and explain each other, but we quickly found a common language, because sailors have a universal language and common interests,” the commander said the combined forces of "Frucus-2011" Peter Demain.

Sailors are training to repel attacks of high-speed ships. It seems that the exercise scenario was imposed on the 2000 attack of the year, when the American destroyer Cole was attacked by a motorboat in the port of Aden during refueling. The exercises went flawlessly, and the last time the exercises took place in Britain, there were a lot of technical problems.

Rear Admiral Leonid Sukhanov, deputy chief of the headquarters of the Navy, said: "The following exercises will take place in Russia. Accordingly, before that they took place in Great Britain, France and the United States. We will prepare for this event and try to create a real, difficult situation."

For Admiral Chabanenko, this is the second exercise in a row, but the fight against pirates is the ship’s natural mission, because in 2009-2010, it ensured the safety of navigation in the Horn of Africa and the Gulf of Aden. "Admiral Chabanenko" became the first ship, for all history Russian naval fleetpassing through the Panama Canal. Campaigns in the Western Hemisphere are more of a routine for a team.

Ctrl Enter
Noticed oshЫbku Highlight text and press. Ctrl + Enter
We are
The action “Military service under the contract is your choice!” In Rostov-on-Don: future contract servicemen, exhibitions and “Russian Knights”"Admiral Chabanenko" goes to the exercises in the Norwegian Sea
2 comments
Information
Dear reader, to leave comments on the publication, you must to register.