The arms race continues. Only our country does not participate in it. 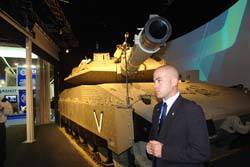 International salons of ground and air defense, security technologies and means of protection are held in the suburbs of Paris near the world famous Le Bourget, once every two years, starting with 1967. The French Defense Ministry patronizes them, and organizes the Association of Manufacturers of Armaments and Military Equipment for the Ground Forces. Russia takes part in Eurosatoria with 1992. Up to 1998, our country simply shone on them, openly demonstrating what was completely secret just yesterday. And it was clear that the level of Soviet military equipment was very high. What our country showed at international stores around the world in the 1990-ies, in many ways surpassed the best Western counterparts. And promising samples, which we also demonstrated, were generally far ahead of the global level.

With 2000, Russia began to reduce its participation in international exhibitions, including in Eurosatory. At the salon no longer bring natural samples, limited to layouts and posters. And this year, the plywood dummies showed, basically, the very technique that became a revelation eighteen years ago.

We seemed to be frozen at the level of 1990, while the world military industrial complex made a revolutionary leap over the past twenty years.

Moreover, NATO realized a lot of what we were the first to offer, but did not advance further development work. Interestingly, Germany and Italy are developing their military equipment most dynamically. Who is threatening them?

The Germans, for example, are intensively improving their armored vehicles and creating the world's best active defense systems against all types of anti-tank missiles. The armored vehicles shown by Germany impressed with their visible power. By mass, they approached the average tanks times of World War II, and in terms of armament they surpassed them long ago. For example, the heavy German armored Boxer in the Russian army simply has no analogues. The Leopard 2A7 + tank is probably the best in the world today. Although, perhaps, the Israeli Merkava Mk4 shares leadership with him. The American Abrams and the French Le Clerk are inferior to these machines. There is no point in talking about Russian tanks. “Leopards”, according to the Germans themselves, once only the T-80U gas turbine could successfully resist. He had the largest power density in the world and literally flew to the battlefield. The Russian "eighties" had a very good combat information-control system - CIUS - and guided missiles that could not be missed, and which could calmly shoot down enemy helicopters. Without convincing motivation, the T-80U was declared an unpromising tank, the priority was given to the T-90. Alas, the heavy diesel T-90 in a duel situation will lose to the “Leopard 2A7 +” in everything. Recently, it was officially announced that the promising Russian tank, “Object 195”, quietly “died”. The Ministry of Defense lost interest in him, work on him was stopped. Meanwhile, this tank was created as a caterpillar platform for a whole family of again promising military equipment.

It turns out that we will not have new artillery and rocket launchers on caterpillar, there will be no new engineering vehicles, there will not be much else.

But Germany showed its version of a promising tank based on the classic “Leopard 2”. This is a completely new machine that allows you to introduce the most promising military-technical innovations into the tank, and it looks very impressive. But it is no secret that the perfection of technical design provides high combat characteristics. Examples: T-34 / 85, EC-2, SAU-100 tanks, Simonov rapid-fire karabiner - the famous SKS, AKM assault rifle, MiG-21, MiG-29 and Su-27 fighters. The list goes on. The Germans have always been adherents of angular, rough forms emphasizing a certain serf power of their heavy tanks. Having retained the right angles in the new car, the designers of Rheinmetall corporation were able to refine the classic tank, giving it even greater external force.

German company ЕАДС has developed several options for active protection for tanks. There is NATO to choose from. For many years, our tank builders have been proud of the Blind optical-electronic suppression system. On the turret of the tank are installed two powerful spotlights, which are specially modulated by the flow of light blinding laser-controlled anti-tank missiles. Until the last day, such systems were our priority. The Germans demonstrated their version of the Curtains, as experts said, completely surpassing the one installed on the T-90. The Israelis in general showed an active system of protection of the Trophy tanks installed on the serial Merkava.

But some of us arrogantly thought that they would not create anything like this in the West.

After all, twenty-five years ago, the unique Arena active defense system appeared in the USSR. There was also "Thrush". Americans, no matter how trying to do something like that, nothing happened. They even stole the drawings of the Arena, but still did not do anything. But in Germany and Israel have done. And they did great.

Is interesting история the emergence of active protection from Israel. Their tank crews were 100% sure that the Merkava tanks were completely invulnerable. Until then, until you ran into the South "Lebanon" Russian "Vampires" - this is the newest type of anti-tank grenade launchers. Having lost a large number of tanks, the Israeli Ministry of Defense gave a command to its industry to urgently create a new version of the Merkava Mk4 with a proprietary system of active defense, Trophy. The task was completed, and the whole world saw the newest tank on the Eurosatori-2010, allegedly with missile defense.

The German company "IBD" showed a fully developed system of active protection of light armored vehicles. Its creators guarantee the protection of vehicles from missiles fired from RPG-7 type grenade launchers. We have nothing of the kind, and in the near future will not. The Italians put up an impressive line of armored vehicles of various purposes, created for the army by the company IVECO. Incidentally, the Italian armored vehicles really liked the chief of armaments of the Russian army, Vladimir Popovkin, who visited the salon on the day of its opening. Fighting foreign cars really look great. They are elegant in shape and very well protected. The landing of the combat "IVECO" is not afraid of either mine explosions under the bottom, or shots at close range from large-caliber machine guns. Around one of the cars - "Draco" - the whole show was arranged. The self-propelled 76-mm gun with a radar sight, developed by OTO Melara, mounted on an IVECO wheeled chassis, was intriguingly wrapped in a red cloth, which was pulled off very effectively in a determined moment. In general, the company “OTO Melara” has long become a leader in the development and production of the most advanced combat systems for various purposes. Her exposition was one of the largest at the Eurosatori-2010. It's a shame: almost all the know-how of “OTO Melara” was invented back in the USSR, and then lost. For example, guns with a radar sight were adopted by the Soviet Army a quarter of a century ago. With the collapse of the USSR, they disappeared somewhere, did not receive any development. The fourth-generation Chrysanthemum ATGM was frozen, again with a radar control system. On the adoption of its weapons was said many times, but neither in the troops nor in the global arms market, "Chrysanthemum" no one has seen. Russian creators of anti-tank guided missile systems are confident that similar ATGM will appear soon, but they will be of western production.

China to the salon "Eurosatory" brings not a lot of exhibits. But, in contrast to Russia, China finds the means to deliver to France “natural” samples of guns, self-propelled artillery systems, armored vehicles and much more. And we only have enough money for toy models.

As they say very knowledgeable in trade weapons People, very soon, China will occupy all the niches in the world market that we still control.

And then Beijing will decide: let our gunsmiths go somewhere with their “innovations” twenty years ago or sell their own to third countries - even worse, but in much more modern packaging.

Today in NATO, the modular design of combat vehicles is popular. But after all, again, in our country, such a scheme for creating cars began to be realized in a breakthrough tank "195 object", in the Vodnik armored vehicle, in a heavy BTR-90. Where are all these modular fighting vehicles? Declared unpromising. Interestingly, what is promising for the Russian Defense Ministry in terms of military technology? The technical superiority of the NATO armies over the Armed Forces of Russia is indisputable. The more we have weakened and weakened over the past twenty years, the more they strengthened their military power. What for? To fight global terrorism? And who guarantees that our country in one, far from a wonderful moment, too, will not bring the “axis of evil” into the category of states? Of course, this question is geopolitical, but it is impossible not to ask them. On the vast territory of the globe, saturated with the most diverse resources, having forests and fertile soils, not poisoned by chemistry, there is almost no sober-thinking indigenous population left. And the remnants of this population are melting disastrously.

And at the same time, there is a striking calm of most of the most influential politicians and the entire leadership of the Ministry of Defense. We do not threaten anyone, nobody will attack us.

We do not need tanks, Russia and without them will soon become a fabulous country!

Fine. Just tell me: against whom, then, our friends, Germany and Italy, and the entire NATO bloc, with China into the bargain, are intensively building up their already almost fantastic military-technical power?