Caucasian problem on the background of the murder in North Ossetia 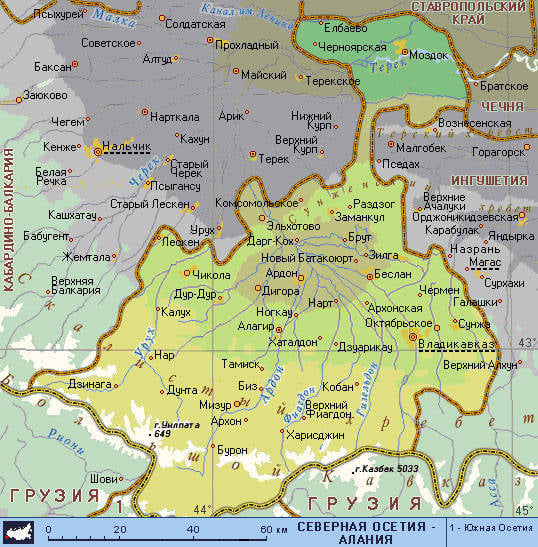 On May 26, in the Republic of North Ossetia, near Vladikavkaz, the decapitated body of an 71-year-old public and cultural activist Shamil Dzhigkayev was discovered. He was known as a poet, dean of the faculty of Ossetian philology of the North Ossetian State University. KL Khetagurov. The motive for the brutal murder was inter-ethnic and inter-religious strife. A Ossetian poet wrote a poem “Riding a Wolf for a Hajj” a few years ago.


The basis for it was the Chechens' insult to the memory of the victims of Beslan: an attempt by the pilgrims from the Chechen Republic to meet natural needs within the memorial cemetery of the victims of the terrorist act in Beslan in September 2004, during which more than 300 people died, mostly children, the wounded were more than 700 people. That is why the poet reacted so emotionally.

This is not the first episode in the smoldering interfaith and interethnic war in the North Caucasus. Religious fanatics wage their war against mainly Christian Ossetia. The alleged killer was discovered rather quickly - on May 31 it was already eliminated in Vladikavkaz during a special operation, it was not possible to take it alive. It was David Murashev, after its liquidation in the republic more than a dozen Muslims were detained - members of the mosque of Vladikavkaz, and the imam of the mosque Kulat Ismailov was detained.

Relatives of the detainees claimed that they were planted weapon and drugs, with a sharp protest made by the Council of the Spiritual Administration of Muslims (DUM) of the Republic of North Ossetia-Alania, headed by its head, Haji Murat Gatsalov. In their opinion, the detainees are all as one “God-fearing law-abiding citizens. They are the initiators and activists of the relay race for peace and friendship. "

The roots of this war go back to the depths of centuries and were smoothed over by a strong central authority in the Russian Empire, and then in the USSR, at the present time they have reappeared. Over the past two decades, more than fifty terrorist attacks were carried out in North Ossetia. Usually, traces of crime lead to Ingushetia and Chechnya.

After the publication of the poem, the Ossetian poet received more than one promise to kill him, including “cut off his head”. An interesting fact is that the Chechen ombudsman Nurdi Nukhazhiev actually laid the responsibility for the death of the poet on himself, they say, wrote a "frankly provocative" poem. And the Ossetian authorities are guilty - they did not punish him for this “extremist” poem.

Another feature of the conflict is the fact that a generation of radical Ossetian Muslims has grown up, ready to kill their Christian brothers. So, the killer of the poet Shamil Dzhigkayev is Ossetian by nationality. Therefore, those who call upon Russia to “leave” from the North Caucasus should understand that if Russia “leaves” there, it will have to take responsibility not only for the mass death of the Russian population there, but also of the Christian peoples of the Caucasus. They will be completely isolated and will be doomed to cruel fate. It is doubtful that the same Ossetia - South and North - will withstand attacks from Chechnya, Ingushetia and Georgia. Both Armenians and other nations will be doomed to genocide.

Thus, a sociological study conducted by the Caucasus Times agency in 5-cities-capitals of the republics of the North Caucasus, showed that 44% of the population of this region have a negative attitude to Christianity. According to the Caucasus Times, in the Republic of Kabardino-Balkaria, the number of those who are susceptible to radical Islamic ideas is about 39%. In the Chechen Republic, this indicator is 33%, in Ingushetia - about 30%. These are mainly young people from 20 to 25 years.

The main reasons for the growing popularity of Islam and its radical trends are two: 1) in Chechnya and Ingushetia, Ramzan Kadyrov and Yunus-Bek Yevkurov actually impose Islamic norms “from above”. The head of Chechnya, Kadyrov, in fact established Sharia law in the Russian subject. In this way, they deprive the “insurgent underground” of the base, but at the same time strengthen a certain subculture, which in the end can cause a new big bang; 2) the actual absence of a strong “Russian” government in the field, people are looking for an alternative to the Russian authorities and find it in the face of radical Islam, which provides answers to how to combat total corruption, the concept of Islamic justice is very attractive against the Russian background.

Wolf cubs go on hajj.
There is no end to their crimes
Do not settle down bloodthirsty predators
Even rush to the sun.

The holy book of these wolves is fangs,
Even prayer - with criminal intent,
Like pigs, in our cemetery green animals
They commit evil before God.

Hey, sheikhs! Let the earth tremble beneath you,
Moisten your graves!
Damn, be damned! Let urinate
On your prayer black stone is my dog.

We are in Yandex Zen
South Ossetia wants to Russia. How will the republic solve the problem of reunification?
Russia and Georgia: traps from "well-wishers"
26 comments
Information
Dear reader, to leave comments on the publication, you must to register.