23 2011 June
18
At the beginning of the 90s, the Soviet Army collapsed after the collapse of the USSR. Hundreds of military were out of work, and for many former Soviet officers there was only one way to earn a living, to go to war for money. So the word "mercenary" closely entered our everyday life.


For the first time, Russian mercenaries were spotted in 1991 during the armed conflict in Nagorno-Karabakh. Armed detachments of both Armenians and Azerbaijanis fought without using any tactics, everything was messy and even more impulsive. Support for the next offensive of Azerbaijanis from the air was a complete surprise for everyone, since this had not happened before. Russia denied all the rumors that the villages of Nagorno-Karabakh bombed its planes. And it was true, the planes were indeed Azerbaijani, but they were controlled by Russian pilots. 25 November 1991 of the year in the skies over Stepanakert, the Armenian air defense forces shot down one of the planes. The pilot managed to eject, but on the ground was captured by representatives of the Armenian army. The pilot was a former senior lieutenant of the USSR Air Force Yuri Bilichenko. In an interview with television journalists on the question of how he ended up at the helm of a military plane of a foreign state, he said the following: “I was offered to return to the service again, but already in the Russian Army, but I refused, because there was no desire to return to the obvious mess that was going on in the military. And here I was promised a salary in 5 of thousands of dollars and an apartment in any Russian city. I agreed".

Despite the fact that the former officer went to fight for money, he can be understood. In 1991 aviation the regiment, which was stationed near Baku and in which Bilichenko served, was simply dispersed and the combat officer was no longer a fate. The search for work did not bring a positive result, but here such an offer is a good salary and the work that he can do: fly and shoot. Of course, today you can condemn an ​​officer, but you can understand. The only fate of the mercenary Bilichenko is that the Armenians released him and he was able to return to his homeland.

In the middle of 90 in Europe, there were a lot of hot spots where experienced military personnel were needed and mercenaries migrated from one war to another. The military conflict in Nagorno-Karabakh had barely ended, as the civil war broke out in the former Yugoslavia. The massacre that began in 1992, like any civil war, was brutal. In Bosnia, mercenaries and volunteers pulled out, the Mujahideen from Arab countries - on the side of the Muslim Serbs, on the side of the Orthodox Serbs - representatives of the republics of the former USSR. How many mercenaries have died and how many have gone missing is unknown until today, just as their total number is unknown. As a rule, in most cases, the mercenaries independently traveled to Yugoslavia and there already searched for those who needed their services. With the end of the war in the territory of the former Yugoslavia, the mercenaries did not remain without work, because by that time the armed confrontation had flared up in the North Caucasus - in Chechnya.

The streets of Grozny have not yet cooled down after the pre-New Year assault, and among the officers and men of the Russian army, information began to spread that they were fighting against specially trained units of the Ukrainian nationalist army UNA-UNSO. 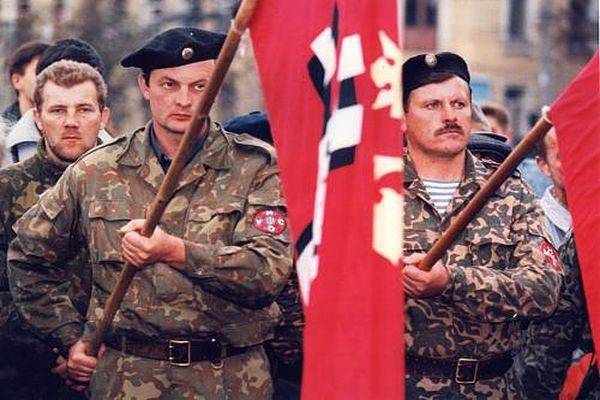 The participation of Ukrainian volunteers, as they called themselves, in the Chechen war became possible thanks to a secret agreement between the leadership of the nationalists and Dzhokhar Dudayev. “We agreed with Dudayev about the participation of Ukrainian volunteers in the Chechen war, and this agreement was later implemented,” says Dmitry Korchinsky, head of the UNA-UNSO with 1991 to 1997.

The militants of the UNA-UNSO are ardent nationalists, they considered Russia their main enemy and took revenge for all past and present offenses. However, the Ukrainians are not the only mercenaries who fought on the side of Chechen militants. Representatives of Arab countries, the Baltic states, Azerbaijan and many other far-abroad countries also took part in the war. It is worth noting that not only men became mercenaries, but also women, who, as a rule, were snipers, and on their conscience not one killed Russian officer or soldier. Between themselves in the Russian army such women were called “Black Scarves”, they were hated and feared. One such example is a native of Poltava, Elena, who in her 27 years decided on the blood of soldiers to earn money. For her military campaign, she killed 20 Russian troops, and was caught when cynically on the radio bargained for the amount of remuneration.

By the end of 90, the situation in the post-Soviet space had stabilized somewhat. The second Chechen campaign ended, and peace came to the North Caucasus. In Europe, the centers of civil wars were also extinguished, and the mercenaries were actually left without work. As a rule, the further fate of those who went into battle under foreign flags is unknown, but something else is known: many have never returned home from “lucrative” voyages, which, however, is not surprising, because death for a mercenary is only one of the clauses of the contract, which states that life is not guaranteed.
Ctrl Enter

We are in Yandex Zen
Memory in the desert
How did the first interethnic conflict in the USSR begin? Caucasian Knot
18 comments
Information
Dear reader, to leave comments on the publication, you must to register.