For nearly a hundred years, the Russo-Japanese War is considered to be a national disgrace

17 2011 June
13
May 27, 1905 Russian 2nd Pacific Squadron fleet under the command of Vice Admiral Rozhdestvensky suffered a crushing defeat in the Tsushima Strait from the Imperial Navy of Japan. It was this battle and the defeat of the Russian flotilla that set the last point in the inglorious, according to many, the Russo-Japanese war, a harbinger of impending troubles. 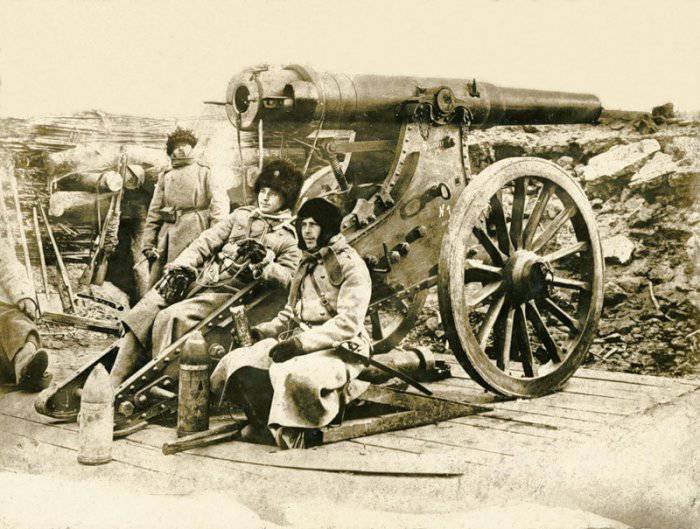 For well-known and obvious reasons, the description of the Russian-Japanese war in domestic historiography is extremely ideological in nature, and the inertia of the Soviet attitudes is still felt. Every schoolchild knows that the defeats on the front of the Russo-Japanese War have undermined the already “rotten tsarism”, respectively, accelerating the process of “popular indignation” that was gaining momentum. However, the revolution began in January 1905, that is, four months before Tsushima and seven months before the signing of the peace treaty.

Foreign countries will help us

Until the end of the war is still very far away, its outcome is unclear, there is no talk of any defeat yet, but nevertheless strikes start throughout the country, then a real terrorist war unfolds. Militants pursue mayors, officers, large manufacturers, even policemen. Under the blow are people known throughout Russia. So, 4 February 1905, the son of Alexander II - Grand Duke Sergei Alexandrovich was killed by a terrorist, and a prominent statesman Earl Shuvalov was shot on June 28. Shortly before this, the sailors of the battleship Potemkin rebelled, a rebellion broke out a little earlier in the Polish city of Lodz. In this regard, it is interesting to see where the revolutionaries came from. weapon.

So, I'll start with the famous stories about the steamer "John Grafton". In London, a steamship was bought to deliver weapons to the revolutionaries (see the scale). Several thousand small arms (in particular, Swiss Vetterli rifles), ammunition and explosives were loaded onto it. The ship arrived first in Copenhagen, then in Stockholm (the Japanese embassy moved there from Russia at the beginning of the war), and then sailed to the shores of Finland, where it ran aground. The team unloaded weapons on the neighboring islands, but most of them did not reach the addressee. Nevertheless, during one of the key episodes of the 1905 revolution of the year - the December uprising in Moscow, the police recorded that some of its participants were armed with Vetterli rifles.

Who was the organizer and direct participant of this operation? The headquarters was in London. And here is a list of people involved in the case.

Wilson is chairman of the British Mariners' Union, member of the British Parliament. Akashi is a Japanese military attache in Stockholm. Strautman (captain of the steamer, a member of the London-based SDLP group in London), Wagner (worked at the glass factory in Wulwich), Mink (lived for many years among immigrants in London on Commercial Road), Strauss (in the spring of 1906-i went to Libau with transport weapons for the Baltic region, was arrested and hanged), Kristaps (later served in the intelligence service of the Red Army). Zilliakus (one of the leaders of the Finnish Party of Active Resistance), Lehtinen (later a member of the CPSU (b). Social Revolutionaries Tchaikovsky, Teplov, Volkhovsky, Cherkezishvili, Rutenberg, Bolsheviks Litvinov and Burenin. As you can see, the struggle against Russian statehood was joined by completely heterogeneous forces.

Here is the second, no less famous story about the supply of weapons to revolutionaries. Another ship, the Sirius, is bought, it is also loaded with weapons - 8,5, thousands of Vetterly rifles and a large quantity of cartridges (data spread from 1,2 to 2 million units). The ship sailed from Amsterdam to the shores near the city of Poti. "Sirius" arrived at the place where its contents were loaded onto four longboats, and they spread like cockroaches. Something that our border guards intercepted, but a significant part of the weapons to the revolutionaries still came.

It is clear that war is first and foremost a struggle between systems, economies, industry and resources in general. So, the entire war to Japan went coal supplies from Britain, there were purchased warships, arms exports from the United States, which began even before the war, increased dramatically in the 1905 year. The question arises, with what money did the Japanese make a militarizing dash? Basically, on American and British, it was the United States and Britain that provided Japan with appropriate loans. In general, Japan covered 40% of its military spending with foreign loans.

This is only a tiny fraction of the vast array of facts that clearly indicate that Russia was fighting, in fact, not with Japan, but with a coalition that included the largest, richest and most powerful countries in the world - the British Empire and the United States. Japan by and large only provided manpower for the war, but weapons, money, energy resources, that is, everything that plays a decisive role in the wars of the industrial era, provided a truly developed and strong powers.

It is noteworthy that 30 January 1902 was signed the Anglo-Japanese agreement, according to which England could come to the aid of Japan only if Japan wages war with two (and more) countries at the same time. But the war seems to be Russian-Japanese. That is, Japan fought only with Russia. So? Not this way. Montenegro declared war on the Japanese. Perhaps this decision lobbied London through its diplomatic channels. After all, Russia received no more or less serious support from the Balkan country.

When it comes to the Russian-Japanese War, a cliché about “technical backwardness of Russia” always pops up. True, it usually does not indicate from whom Russia lagged behind. Since Japan is constantly mentioned and the war itself is called the Russian-Japanese, it is logical to conclude that it means lagging behind the real rival. When there is a belief that Russia lagged behind the Land of the Rising Sun, more global conclusions about the “rottenness of the Russian Empire” are already automatically made.

What is the objective side of the question? The fact is that Japan was largely armed with Western weapons, and, as mentioned above, it received money for militarization in the same place in the West. So if you can talk about the backwardness of Russia, it’s not from Japan, but from the most developed countries of the West. On the contrary, Russia was much more powerful than Japan, including in the industrial and — more broadly — economically, overtaking the enemy and in terms of the development of the military-industrial complex. By the way, Russia also bought weapons in the West, which makes the thesis about lagging behind Japan even more ridiculous. Both countries acquired weapons from the most developed countries of the world. Nevertheless, for more than a hundred years, our country has been in the grip of black PR, according to which “backward and rotten Russia” could not even cope with Japan. The Russian-Japanese war is considered to be the beginning of all the troubles that befell Russia in the 20th century.

Why is this strange myth so tenacious?

The answer is simple. It was adopted by anti-state journalism even before the 1917 revolution of the year. After this, the stamps of Bolshevik and revolutionary propaganda became part of the official state ideology, and people have been brainwashed for decades. Relevant textbooks, books, articles, “historical” works, and so on were written. Over the years, stamps have become perceived as a self-evident truth.

But the mythology of the Russo-Japanese War is by no means limited to inventions about Russia's technical backwardness. During negotiations with Russia, a meeting of representatives of the highest authorities of Japan was held. Present were the emperor, genro, cabinet representatives and senior military officials. War Minister Terauti then declared that the war could not continue any longer, since there were not enough officers. Finance Minister Sone said that it was impossible to continue the war because there was no money for that, he was supported by other participants in the meeting. The head of the army headquarters, Yamagata, said that the only way out was to make peace. The general conclusion of the meeting: Japan needs peace.

A prominent historian, professor Syumpei Okamoto, appreciated the martial law of Japan as follows: “It is obvious that the military prospects of Japan were dismal. At that time, the Russian army was three times stronger than the Japanese. While the Japanese army was controlled mainly by reserve officers, since most of the regular officers were killed or wounded, the Russian army was mainly composed of first-class military personnel who had recently arrived from Europe. ”

By the way, for those who believe in screaming about the “shamefully and foolishly” lost Mukden battle, I will again quote Syumpei Okamoto: “The battle was fierce, it ended on March 10 with the victory of Japan. But it was a very uncertain victory, since the losses of Japan reached the 72 008 people. Russian troops retreated to the north, "maintaining order," and began to prepare for the offensive, while reinforcements were all arriving. At the imperial headquarters, it became clear that Russia's military might was greatly underestimated and that up to a million Russian soldiers could be in northern Manchuria. Russia's financial capabilities also far exceeded those of Japan ... After the “calculated retreat,” Russian forces replenished their military might on the Manchurian border. ”

We should not forget that the population of Japan was three times less than the Russian one; accordingly, its mobilization potential was significantly lower than the capabilities of our country. Japan had no illusions about its forces. Pre-war calculations showed that resources would be enough for a year of hostilities, which, in fact, was confirmed, since in reality Japan barely lasted a year and a half, and this was largely due to the revolution that had developed in Russia. Thus, from the very beginning, all of Japan’s hope was for a blitzkrieg, for a quick victory, until Russia pulled the main forces towards Manchuria. But to break the Russian army with poltychka failed. On the battlefields, the Japanese were losing much more Russians in manpower, while Russia increased the capacity of its railroad and quickly built up a group of troops well-secured and armed, seeking numerical superiority. In Vladivostok even managed to transfer submarines.

That is, as a result of “endless shameful defeats”, Tsushima, Mukden, the surrender of Port Arthur, our army was much stronger than the Japanese by the time of the peace negotiations, and the Japanese did not have enough funds or soldiers to continue the war. The first offer to make peace was followed by the Japanese back in 1904. And only the revolutionary events unfolding in the country forced Emperor Nicholas II to go to the world war, which in no way was the result of a military defeat. Our victory was thwarted by people who launched a terrorist war in Russia called the “1905 revolution of the year”, those who had already dreamed of changing the state system in Russia and made all possible efforts to that end.

We are in Yandex Zen
Tsushima Myths (Part of 2)
Russo-Japanese War 1904-1905's. State of the Russian fleet. Bad luck and missed opportunities
13 comments
Information
Dear reader, to leave comments on the publication, you must to register.