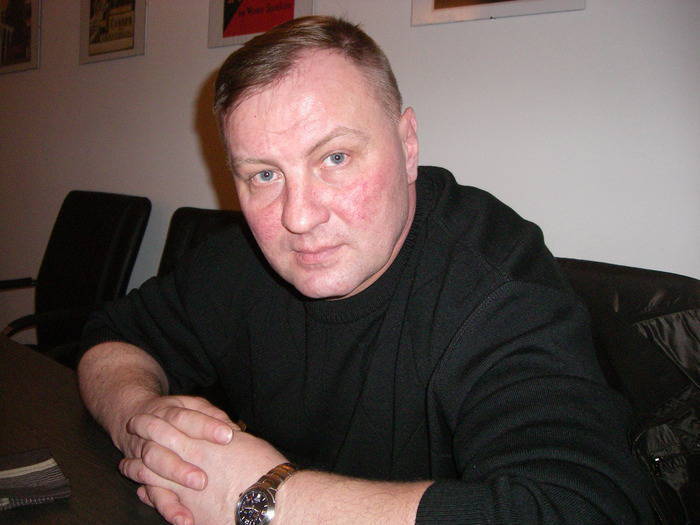 In 2003 I made a story about Yuri Budanov in “Forgotten Regiment”. In Rostov, Rostov was invited to a court by "respected businessmen," as they said. They then supported Budanov. They warmed them with dachas, gave money to the family, and it seemed they paid for a lawyer. I was at their gym, drinking tea with them. They said that they had a man at the prison in the guard and promised to take him to Budanov's cell to do an interview with him. But it did not.

He was at the headquarters of the Russian nationalists, who also supported Yuri Budanov. There I was presented with a swastika badge.

Was in the city where Budanov was born. Found his school and even his class teacher. Interviewed her. He sat at the desk at which Budanov sat.

He was at his house and at his sister's house, in Ukraine, where she lived at that time — or rather, she was hiding: from the press, from television, from everything connected with the name of Budanov — his wife Svetlana and her daughter. She was then hard. Very hard. Neither she nor the child had anything to do with the war, nor with the murder, nor with the court, but they were under terrible pressure. Then she wanted only one thing - to protect the child from everything that happens. I was genuinely sorry for her.

Returning, I made a story in defense of Yuri Budanov. Yes, in defense.

A man in a war cannot violate civil laws in principle. There everything is shifting, changing, the scale of values ​​is turned upside down and actions that are creepy and cynical here, there is the law of survival. If you use the Criminal Code, then you can judge any soldier until the last cook in the train. The cartridge that everyone took from there, probably, is three years already.

I felt it then. I think so now. If you carefully study my service, then I can be put on a one-two. A man in a war can only be judged by the laws of the military.

Did Budanov violate military laws? Yes, broke. He crossed that line, which, in spite of everything, is still acutely felt by every soldier.

I still find it difficult to resolve this dilemma. Yuri Budanov killer? Yes. Should he be judged? Yes. Judged as judged? No not like this. In any case, not by the court of such a country - a country indifferent, forgetting its soldiers, forgetting that there is a war going on in it, stealing, fattening, etc., as it seemed then

I dont know. I have no answer.

However, sitting at the home of Yuri Budanov and examining his notes from the war, I caught myself thinking that I would like me to have such a regiment commander. I saw how the soldiers were looking at him, and these glances spoke about everything. As well as the fact that he was not given to the investigation almost to the application weapons. Already realizing that he killed. Already knowing that he beat his lieutenant.

There is also a dilemma, the answer to which - at least in peacetime - I also do not have. The shaman, who is now mentioned in the context of "war criminal" - was the best commander under whose command I had to serve. Budanov I would like to see my commander. My chief of staff, who in the Moscow region before the regiment was sent, tied to the armament of the armory and dumped a conscript soldier because he did not want to write a report on the voluntary dispatch to Chechnya, in war he became the best chief of staff I know.

A lot of people gathered in the studio. Abdulla Khamzayev, lawyer of the Kungaev family. Elsa was his relative. Stanislav Markelov - then I first met him. Anna Politkovskaya - then I saw her for the first time.

After viewing the plot, the conversation went on high voices. At very elevated. Abdulla Khamzayev exploded. I almost got into a fight. Markelov he hated.

Now, years later, I still think that Khamzaev was not the right person, but I was right. Killing children, women, old men and prisoners is impossible. I am not at war with women. Not at war with children. The rape charge was dropped, but apparently it still was.

Then Yuri Budanov was convicted. Then six years passed and he was released on parole. Then he sent me a text message: “Arkady. This is Yura Budanov. ” I replied: "Yes." He thanked for the support of the family. I did not answer. At this, Yuri Budanov came out of my life. Personally, we have never met.

In the 2000th year, near Alkhan-Yurt, they fired at us from the outskirts of the village. The battalion opened fire in response. Armored personnel carriers pulled up and began to beat on the outskirts. KPVT projectile, breaking through the wall of the house, killed an eight-year-old girl.

I absolutely know that I did not kill her. However, there was not a day for me not to remember about it.

Now I have a daughter. I only now understand what it is.

I am in opposition to this power.

If that story I did now, how would I make it?

We were on the same side of the war. It happened. And, whatever I consider now, whatever my personal opinion may be, and whatever personal sentence I endured in Budapest in my personal court, I would probably do the same thing.

But if something had happened to my child, I would have killed it.

The tape is full of posts from the “icon of the Russian army” to “dog the dog's death”. Now versions will be complete. The main two already exist - from "Ramzan Kadyrov kept his promise" to "provocation of the nationalists." Life is such that that and that can be true. Both that, and that have under themselves all bases.

Like all grounds, there are also versions of revenge, or a desire to curry favor, or fanatical Islamic retribution. Attaching a murder to a certain date, as well as asking the question why it is now, two years after release, is pointless.

The only thing, it seems doubtful to me that these were the Kungayevs themselves. And it is doubtful that this is due to the activities of Yuri Budanov after his release. I do not know what he was doing, but the Shaman did not abandon him either during the trial or during his release, and it is logical to assume that he arranged it after his release. Not so long ago, Viktor Barantz interviewed Yuri Budanov, from which it can be concluded that Budanov was released from prison as a changed person. He admitted his guilt. Punishment considered deserved.

Of those who were then involved in that plot ... Abudlla Khamzaev died. Stanislav Markelov killed. Anna Politkovskaya killed. Rostov authority, who promised to take me to the cell to Budanov, was killed. Yuri Budanov killed. And I'm sitting writing this post.

At times the circle closes all the same.

We are in Yandex Zen
“As I told you, it was so. Do not trust anyone!"
National Diasporas Assess Yuri Budanov's Murder In Their Own Way
4 comments
Information
Dear reader, to leave comments on the publication, you must to register.