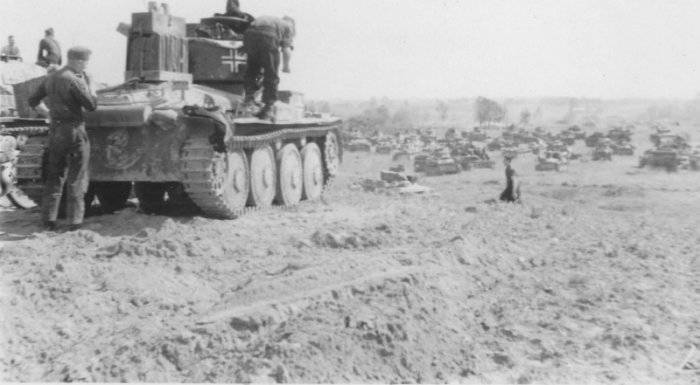 One of the methods of information-psychological war of the West against Russia, designed to put our people and our state on a par with the Nazi criminals, the instigators of the Second World War, was the myth of the outbreak of war by Hitler, as a preventive strike. They say that Berlin just wanted to prevent the attack of the Soviet Union on it, delivered a preemptive strike against the Soviet troops already prepared for the attack.


So, holding the speech in November 1941 in Munich in front of his old party colleagues, Adolf Hitler said the following: “From April to May ... I followed all the processes, full of determination at any moment, as soon as it became clear to me that the enemy was preparing to attack , if necessary, get ahead of it by 24 hours. In mid-June, the signs became threatening, and in the second half of June, there was no doubt that we were talking about weeks or even days. And then I gave the order to speak on June 22. ” According to A. Hitler, it was the most difficult decision in his life, but he was forced to take it, as there are more chances to win if you hit before the Union.

But this is just a myth that refutes a number of facts, one of them is a comparative analysis of the military-strategic plans that were developed at that time in Berlin and in Moscow. So, German developments are all “saturated” with the ideas of “lightning war”, “onslaught on the East”. In Berlin in December 1940, the famous Barbarossa plan was approved, which outlined the general plan for waging war against the Soviet Union. His main idea is a “lightning war”, the Wehrmacht had to solve the “problem” of the USSR in no more than 5 months and move on to solving the problem with regard to Great Britain. The troops were to go to the Arkhangelsk-Volga line, capturing the Baltic states, Leningrad, Belarus, Ukraine, the Central region with Moscow, the North Caucasus. Ural industrial area was to be reachable for action aviation, on this the main campaign was supposed to end. They planned to complete preparations for the war by mid-May 1941, by which time the Wehrmacht should have had enough forces to wage a “lightning war”. A whole bloc was put together against the Union, consisting of Italy, Finland, Romania, Hungary, Bulgaria, Slovakia and Croatia joined them, France supported the government of Vichy, Spain, Portugal and Turkey. Berlin had almost all of Europe’s military and economic potential for a “lightning strike” with all the power combined under the power of the black swastika of Europe.

That is, Berlin struck during the Wehrmacht’s maximum readiness, the Barbarossa plan was carried out punctually. Colossal work was done to prepare the infrastructure, for example, on May 7, the Chief of the General Staff of the Reich Ground Forces, Colonel-General F. Halder, made the following entry in his Military Journal: “The state of the railways and highways for Operation Barbarossa is satisfactory. Concentration on the plan "Barbarossa": 17 thousand trains. After the transfer of troops is completed, the transportation of reserves will begin. ” 12 May Halder writes: "In the army groups" North "and" Center "basically everything that we planned was done." From 22 May, the railways have moved to an accelerated traffic schedule. At the same time, Moscow was “thrown” with misinformation messages - about regrouping troops for the operation against England, about the proximity of the talks between Moscow and Berlin, etc. At the end of May and beginning of June, the exact time of the strike was approved.

In the evening of June 20, Hitler appealed to the troops about the allegedly forced nature of the actions of Germany, which "responded" to the "concentration of Russian troops on the eastern border of the Third Reich." Moreover, the Fuhrer brazenly lied about the "constant violations of the border" by the USSR (it was just the opposite), that a few weeks ago, "there was not a single German border on our eastern border tank or motorized division. " Having formulated the "modern" myth that Germany opposed the "conspiracy of the Jewish-Anglo-Saxon arsonists and the Jewish rulers of the Bolshevik center in Moscow."

A great method, it is well used and the current Western ideologues of the United States, NATO - you want to achieve something, accuse the enemy of what you are doing or plan to do. So, arranging a genocide in Iraq or Yugoslavia, fomenting a war there, the United States, NATO blamed the Serbian leaders, Saddam Hussein. That is, the current internal and external enemies of Russia use ideas created by the leaders of the Third Reich, symbolically, by their deeds, getting into the camp of aggressors, instigators of war against Russia. Although it is not superfluous for them to remember what ended up with all the leaders of the war against our Motherland, the result will be one.

If we study the plans of the military-political leadership of the USSR, the military changes in the Red Army, we can note the following - by June 1941, the Red Army was not in its best “form”. The rapid growth of the army, from 1,9 million in 1939 to almost 5 million to 1 in June 1941, led to the fact that the simultaneous deployment of a large number of new units and formations in a short time led to a general decrease in their material security. affected the alert. Thus, for the military actions in the initial period, it was noted that the “old” cavalry divisions, which retained the command cadres and level of training, showed high combat capability. Most of the armored, mechanized units of the Red Army were also reorganized. New lines of fortifications on the new western borders were not prepared, and fortified areas on the old borders were conserved. Due to the sharp growth of the army, the command corps also increased dramatically, and it also lacked experience and skills. There was a retraining on new equipment.

A number of mistakes and the highest military command in the person of the People’s Commissar of Defense of the Soviet Union, Marshal SK Tymoshenko (since May 1940 of the year) and Chief of the General Staff of the Army General GK Zhukov (since January 1941 of the year) have so incorrectly determined the main direction of the main attack of the Wehrmacht, they thought that the main attack would be in the south-western direction (Ukraine). Thus, when processing the operational plan in February-April of 1941, this strategic miscalculation was not corrected. The last adjustment was made in May - early June 1941 of the year, entitled “Considerations on the strategic deployment plan of the Armed Forces of the Soviet Union in case of war with Germany and its allies”. 24 May this document, which is called "Zhukov's note", was discussed at a secret meeting. As a result, the opinion finally won out that the main blow would fall on Ukraine, therefore the Kiev Special Military District was allocated up to 50% of divisions on the western borders.

In this regard, there was a proposal to "preempt" the enemy in deployment, and to attack the Wehrmacht in the process of its deployment. It was envisaged that 152's Soviet divisions would crush the 100 divisions of Germany in the main direction Krakow-Katowice, and then from the Katowice area continue the offensive operation, break the Wehrmacht in the center and in the north of their front, capturing the territory of the former Poland and East Prussia. It was these ideas that became the main argument for the modern defenders of the myth of the “instigator of the war of the USSR”.

But, first, for this, the decision of the political leadership of the country was needed, but it was not; on the contrary, it wanted to delay the start of the war as soon as possible or prevent the start of the war altogether. Secondly, it was necessary to work out all the details of the operation, prepare the rear for it. Third, to create the necessary offensive groups in the right directions, which was also not done. This is just a proposal, working out one of the possible scenarios of actions of the Red Army in the event of a threat.

The truth is in real actions and documents of the Third Reich, and they say that the Hitlerites were preparing for aggression not for “pre-emption”, but for expanding “living space”, solving the “Russian question”, a step towards building their “World Order”. Hitler himself 21 July 1940, at a meeting of senior military and political leadership said: "The Russians do not want war." The German generals, the same Halder, were sure of this, intelligence reported about it - Russia would only defend itself.

Moscow did not need large-scale wars, and without that it was full of worries, and she was not ready for such a war, preparations had not yet been completed. The Soviet Union did not need "living spaces", slaves, the idea of ​​"world revolution" Stalin buried in the second half of the 20-s. The USSR needed peace.

Ctrl Enter
Noticed oshЫbku Highlight text and press. Ctrl + Enter
We are
Bismarck Hunt (May 1941)Mysteries of the last hours of the Reich Chancellery
Military Reviewin Yandex News
Military Reviewin Google News
198 comments
Information
Dear reader, to leave comments on the publication, you must to register.